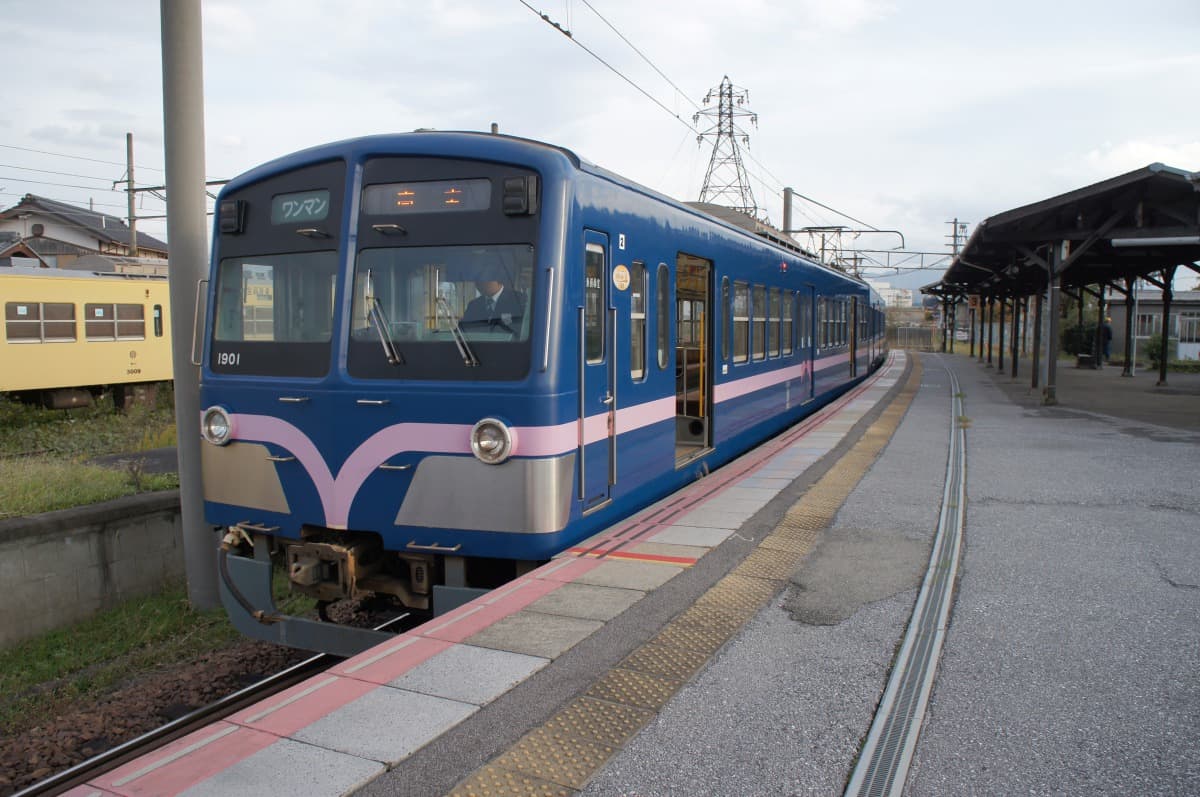 Ohmi Railway allows us to explore the Lake Biwa region quietly, and gives the feeling of having traveled back in time. Its small, colorful trains run through the eastern towns and countryside in Shiga, connecting tourist attractions such as Hikone or Omihachiman, and very small towns with picturesque railway stations. One little known place is the magnificent Taga-taisha Shrine.

Ohmi Railway trains are small and have a very retro look, recreating the Showa atmosphere, as the Japanese say, in reference to the era of the same name from 1926 to 1989. Many colors decorate the retro train cars: yellow, green, orange, and even blue with pink dolphins on the doors! What a delight for train enthusiasts. 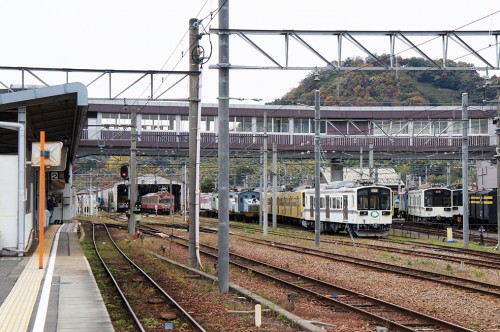 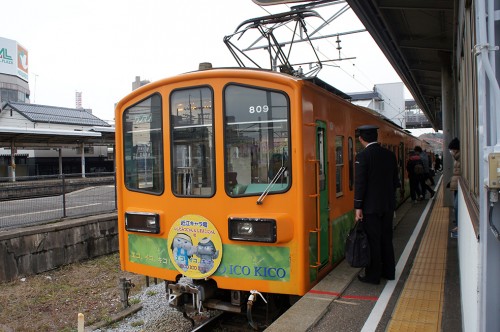 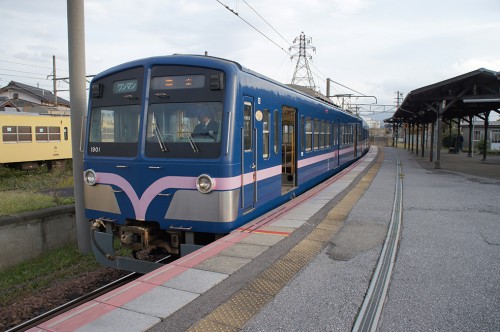 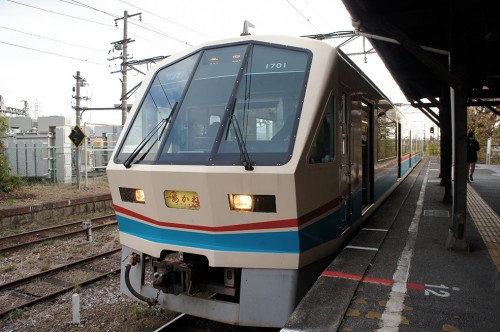 I even saw a train decorated with a manga character wearing a uniform with a cup of beer in hand! I wondered exactly why the girl wanted to offer beer to travelers, I don’t read much manga.

But I could see that it was connected to the famous anime K-ON! The animation is set in the Toyosato Elementary School, a 1930s school, deserted by students but today it is open to tourists, be they anime fans or interested in architecture and school history. 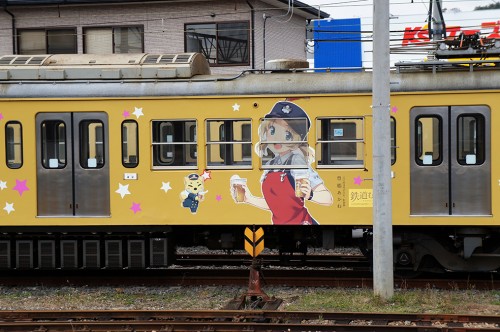 Traveling by Train on the Ohmi Railway: Like Traveling Back in Time

One or two train cars reminded me of Hayao Miyazaki’s film “Spirited Away.” I felt inspired by riding on the slow, single lane trains, watching the scenery pass between houses and fields. I had the feeling of traveling back in time, like I was living out a scene in a Japanese movie. 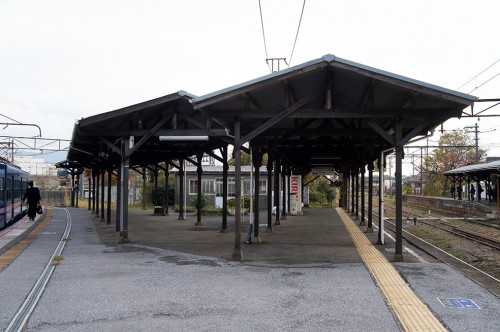 Takamiya Station is unique with this architecture. 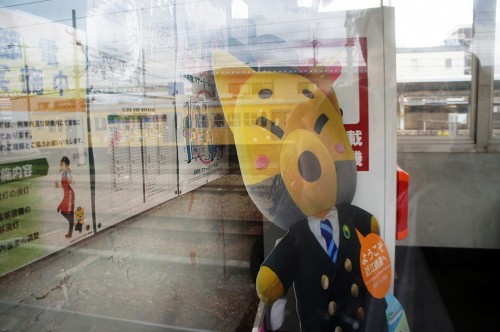 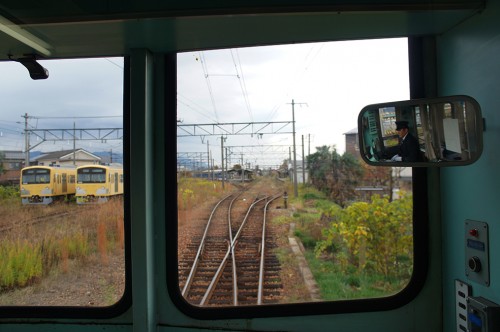 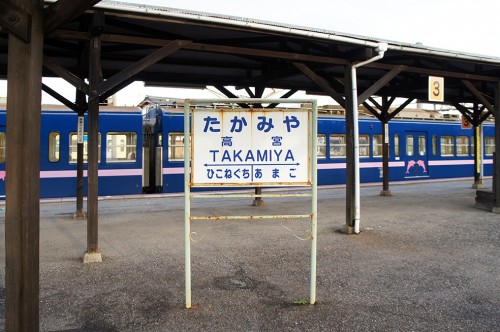 There is not much to see in Shin-Yokaichi (you can, however, find some museums at the next station, Yokaichi), but it’s worth stopping by to see the station itself. The Western-style wooden building, dating back to 1913, has the appearance of a haunted house, with its turquoise facade covered with ivy.

But it is not a ghost station because even if these trains are little known to tourists, they are used regularly by the inhabitants of the villages they serve and at 16:30 many students get off here before riding their bikes home. 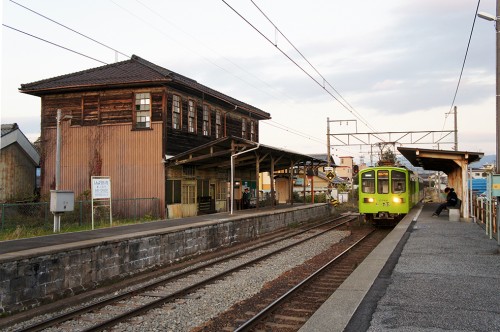 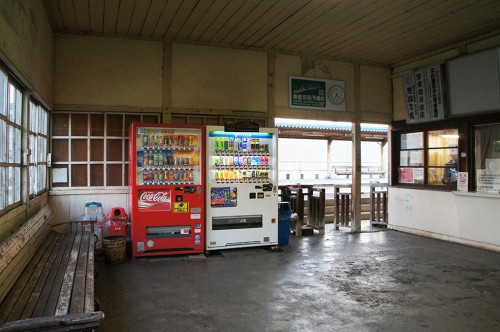 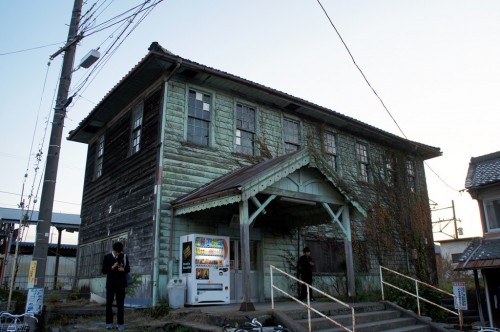 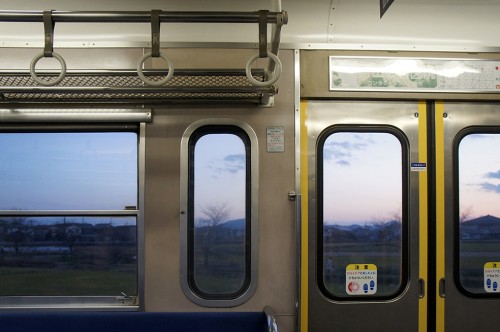 Among the places that can be visited by taking the Ohmi Railway lines, there is one that you should not miss. From Takamiya Station, a train line can be taken to get to Taga in 7 minutes. It seemed to be a quiet little town, but the giant torii welcoming visitors in front of the station stood as evidence to the wonderful sights hidden among the streets of the town. 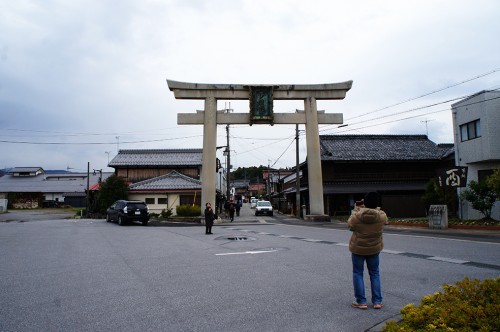 Following the torii street, then taking a left at the dead end, a 10-minute walk takes you through quiet streets, lined with houses and some shops. After, you can see a street lined with several restaurants and omiyage shops (“souvenirs”) this street leads to Taga-taisha Shrine. 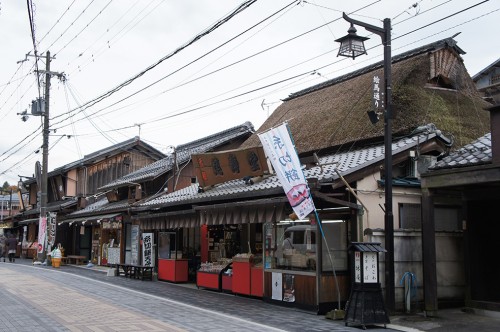 I found it very impressive to discover a sanctuary so beautiful and imposing in a city so small. Taga-taisha Shrine, dedicated to the Shinto deities of longevity, successful marriages and luck, dates back to the year 620, according to Kojiki (The oldest extant chronicle in Japan). It is known as  “Otaga-san” among locals and sometimes visitors come from far away to get married or pray, especially during ceremonies like the Shichi-Go-San, for kids whose age are 7, 5 and 3 years old. 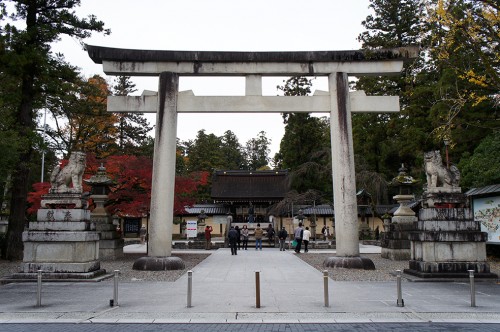 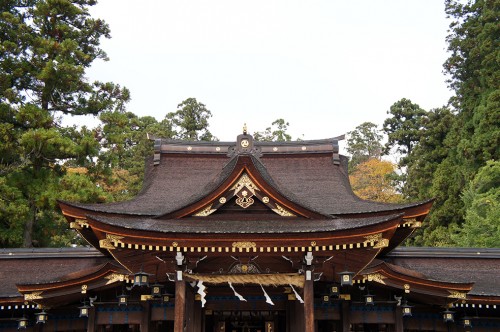 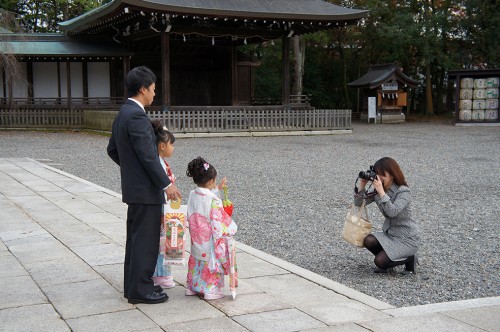 Far from the crowds in Kyoto, visitors can take enough time to get a feel for the special atmosphere of Shinto places of worship. In addition to its elegant, dark-hued, gold-accented main building, the shrine holds the Taikobashi Bridge (“drum bridge”), which is likely to bring long life and health to the many elderly people who climb it. Worth a try! There is also a path of vermillion torii leading to a small shrine dedicated to Inari, or a noh theater scene. 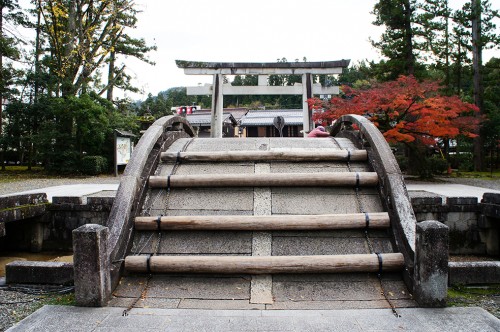 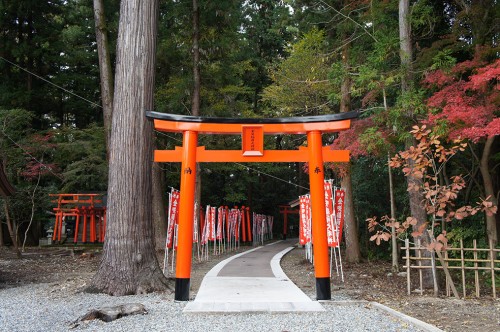 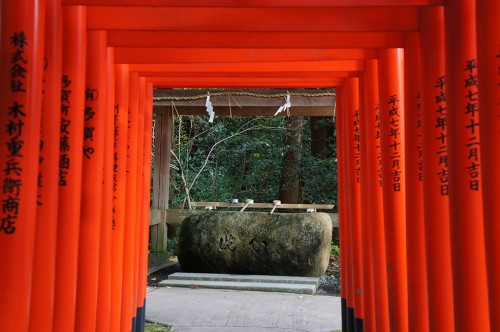 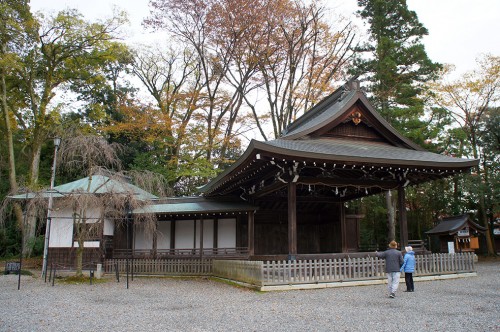 Ohmi Railway’s website is available in English. The 2-day Pass, at ¥ 2,000 for foreigners, allows unlimited travel on the Ohmi Railway lines, and also the company’s 7 bus lines, the pass also allows guests to visit Omihachiman, or take the Hikone Tourist Bus.

For the detailed Ohmi Railway train lines, check out the map of the network. Since at most stations, the driver alone controls tickets at the exit, the company has posted an explanatory page on what to do. A page is also dedicated to events that take place near the lines.

More information about the Taga-taisha Shrine on the Sanctuary website (only in Japanese). Free entry.

For more tourist information to plan a trip around Lake Biwa, visit the Shiga Tourism website. 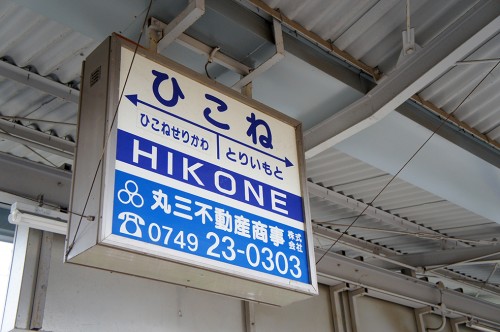 Attention: At Omihachiman there is no display in English, you must follow this sign (right out of JR lines). 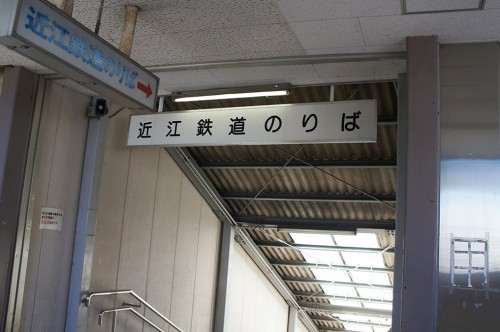 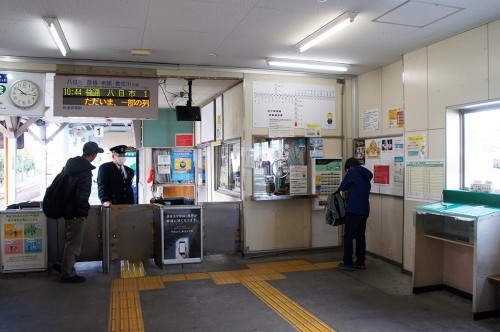 Taga-taisha Shrine can be reached within a 20-minute train ride from Hikone. Take the Ohmi Railway train to Kibukawa, and change to Takamiya for the train to Taga-taisha Shrie, the shrine being its terminus.