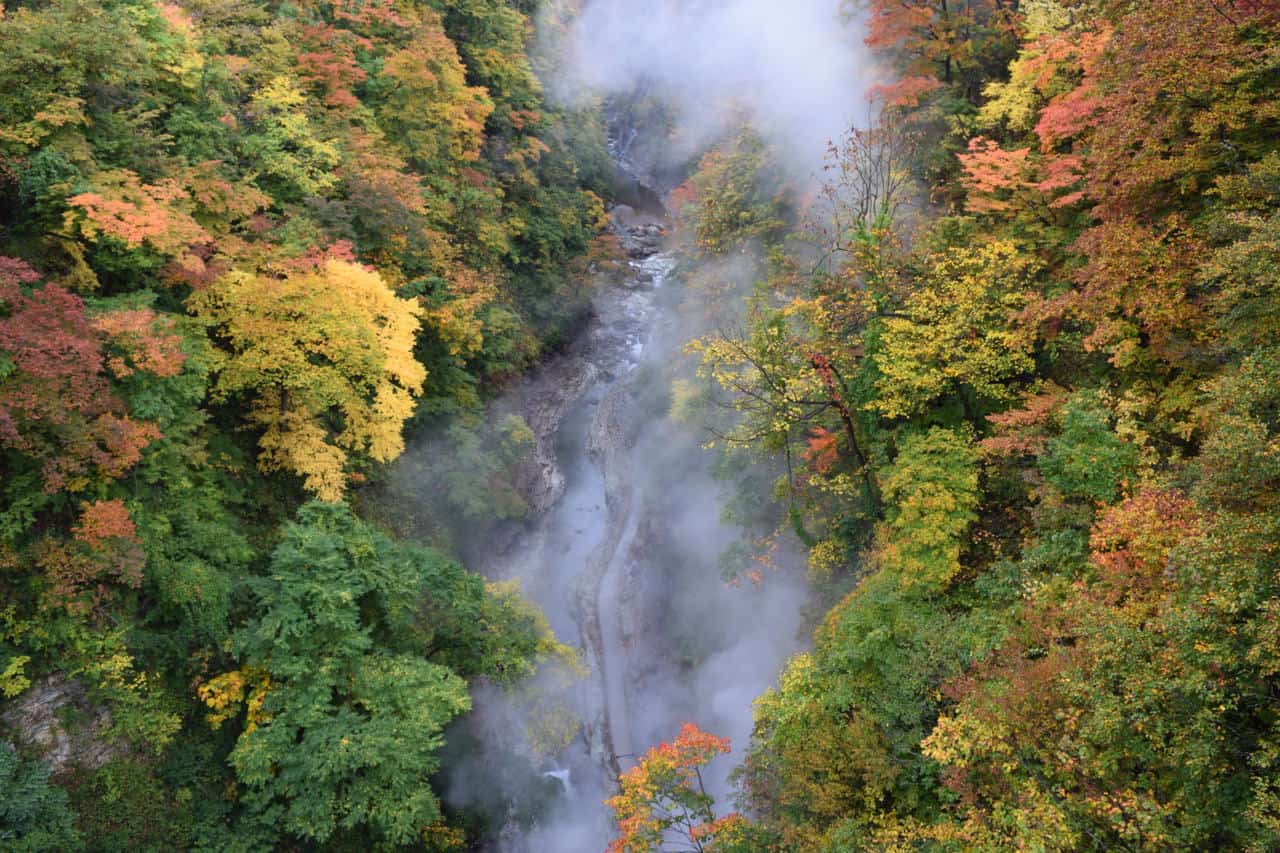 Autumn leaves and wild onsen in the Oyasukyo Gorge

Whether you already live in Japan or are just passing through, you will naturally want to go southwest of Tokyo and visit the most popular tourist destinations, such as Kyoto or Osaka. However, a trip north to the Tōhoku region which covers the northeast of Honshu, the main island of the Japanese archipelago, will allow you to enjoy magnificent landscapes and the warm hospitality of the inhabitants.

Among the places to see, the city of Yuzawa in Akita Prefecture is nestled in the mountains, among ancient volcanoes. Its many hot springs and the Oyasukyo Gorge make it an ideal destination for nature and onsen lovers. The landscapes are magnificent, especially between mid-October and mid-November during the Momiji (red maple) season. And from what they say, it is in this region that the most beautiful women in Japan are found…

Akita Airport is a 1-hour flight from Tokyo and it will take 1h30 by car or about 2 hours by train to reach Yuzawa. The city can be explored over a weekend.

Yuzawa and the enchantment of autumn colors

If you drive to Yuzawa, you will pass through beautiful landscapes. During the autumn, the road crosses forests of fir trees that sometimes reveal misty mountains with bright red and orange colors.

To begin your journey in the region, I strongly recommend that you visit the Oyasukyo Gorge. Resulting from the erosion of the river that has followed its course for tens of thousands of years, the gorge offer a breathtaking panorama.

Alongside the free car park, a shop offers souvenirs and some local specialties (they even sell ice cream, a commonly found treat in the onsen regions). A chance to renew your strength before you head off on the hiking trail that begins its descent into the mountains. On the left side of this store, there is a viewpoint that gives a first glimpse of the impressive Oyasukyo Gorge and its vibrant colors. During my trip in mid-October, the trees were just beginning to be red-orange, but the colors were already giving the landscape a most splendid appearance.

Walking into the steamy gorges of Oyasukyo

In order to reach the path that winds through the gorges, you will first have to descend a staircase of nearly 200 steps.

Just a few steps down, I was immediately struck by the power of the landscape in front of me: rocky cliffs 60 meters high wrapped in clouds, fumes gushing furiously from crevasses in the rock, and below, the Minase River whose fast-flowing water was spectacularly splashing against the rocks.

The trail quickly leads to the most surprising place of the hike: the “Oyasukyo Daifunto”, where the warm waters reach 98°C and release huge clouds of steam.

This breathtaking view is known as the “Hell’s Cauldron”, and for good reason: it feels like the cliffs are breathing with the steam clouds.

When arriving at the site, a sign explains the phenomenon as follows: water from precipitation and snowmelt seeps underground where geothermal heat causes it to boil. Then, the hot water returns to the surface, though normally, the phenomenon remains invisible. But here, thanks to the erosion caused by the river, it appears at the surface!

Waterfalls and sumptuous views from the heights of the cliffs

Once you have recovered from your amazement, you can continue on the second part of the trail which is more peaceful, where you can admire beautiful waterfalls running down the cliffs.

From there, you have to take a staircase to get back to the roadside. The walk concludes at a bridge that connects the two cliffs surrounding the Oyasukyo Gorge, offering a breathtaking view of the magnificent autumn colors and the amazing rise of steam clouds whose intensity obstructs the view at times. The hike lasts about 1 hour. The sulfur fumes can be quite strong, so I advise you not to linger too long in the heart of the gorge.

If these steam clouds have inspired you to relax in a warm onsen, many local establishments offer some at affordable prices. To enjoy an indoor bath, I stayed at the ryokan Yunoyado Motoyu club (湯の宿元湯くらぶ) whose rooms have their own private onsen.

But, if you like outdoor onsen, I advise you to head towards the wild onsen Kawara no Yukko ( 川原の湯っこ) which is located on the edge of a river in Akinomiya onsen.

Dig your own onsen, surrounded by flamboyant colored maple trees

Kawara no Yukko (川原の湯っこ) is a free onsen with a fun and original concept, located only 45 minutes by car from Oyasukyo. You can create your own footbath by digging a hole along the Yakunai River (役内川), where water from 70℃ rises from the ground.

There are shovels available for visitors in a small cabin next to the free parking lot. With my shovel in hand, I first followed the path along the river before getting closer to the water. On the pebbles, you can already feel the heat of the vapors that come up under your feet.

You can then dig wherever you want to, to make your own footbath, and if necessary, you can manage the temperature of your onsen with the fresh water from the river.

Solitude in the Heart of Nature

You will truly be immersed in the middle of nature. When I was visiting, there was no one there. Sitting on the rocks, with my feet immersed into the thermal water, I was able to fully enjoy the view of the nature that surrounded me. The autumn leaves were just beginning to change color, but if you come in November the landscape will be even more impressive.

Remember to bring a towel with you as it will not be possible to find one on site. However, if you need advice, the staff at the charming family restaurant Shokudo Mako (食堂まこ) will be happy to guide you.

How to get to the Oyasukyo Gorge?

The easiest way to get around the region is to rent a car. From Akita Airport, it is about an hour’s drive to Yuzawa.

If you can’t or don’t want to drive in Japan, you have two options. The first one is by plane; it is then possible to reach Yuzawa by bus or by train from Akita Airport.

The second option is by train. It takes 3h15 by Shinkansen from Tokyo, and then 45 minutes by regional train. From Tokyo station, take the Shinkansen Komachi line to Akita and get off at Ômagari. Then, take the JR line in the direction of Yuzawa.

For my part, I was able to discover the region by staying in a luxurious ryokan, in the heart of breathtaking landscapes, and by experiencing the art of traditional Japanese kites with Mr. Ono, in Yuzawa.