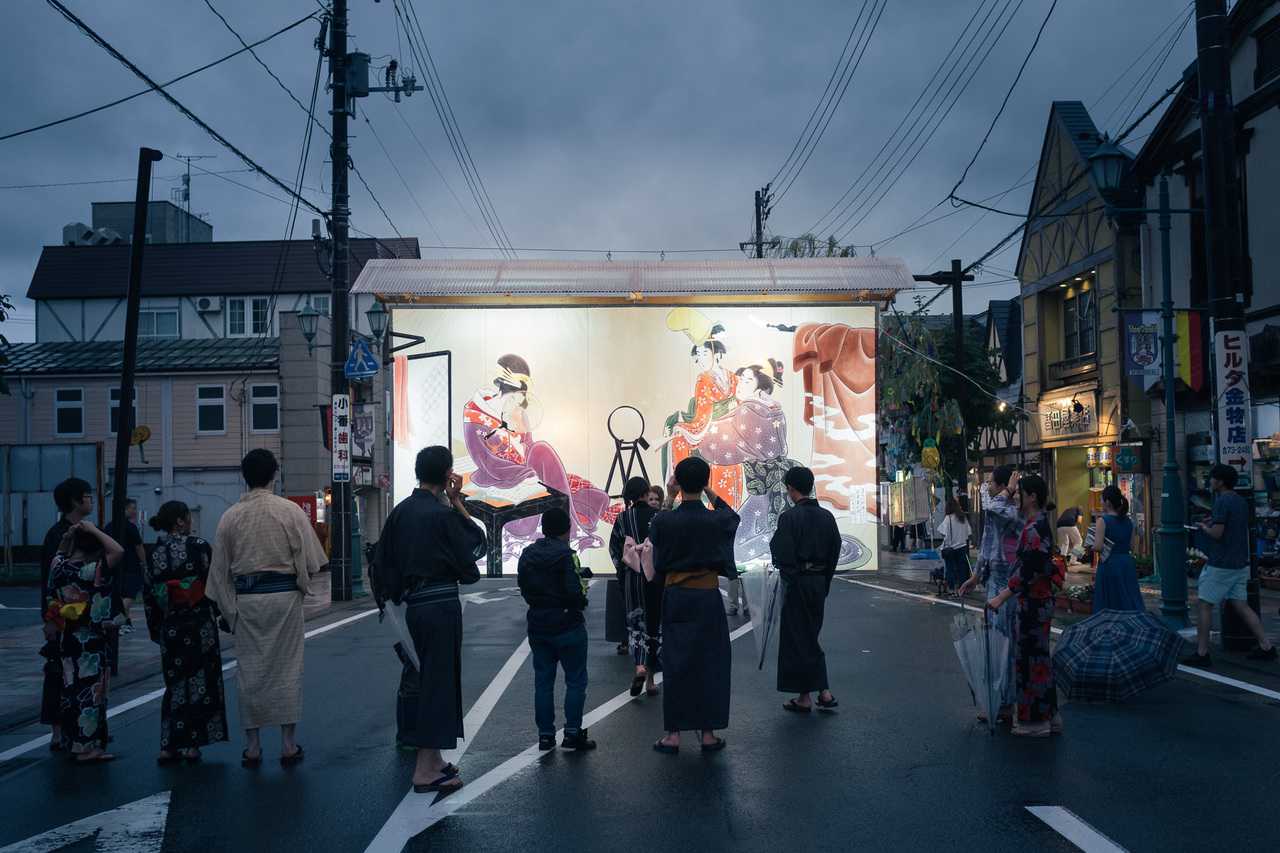 In Japan, ancestral traditions are still very much alive, and wherever you go, the many festivals held throughout the country will give you the opportunity to enrich your knowledge of Japanese culture.

The city of Yuzawa, nestled in the mountains of northern Japan in the Tohoku region, is known not just for its rich nature and onsen, but also for its cultural richness. Several festivals are organized in the region throughout the year.

In summer during Tanabata, the”Star Festival”, the streets are lit by huge paper lanterns decorated with paintings depicting women; in autumn, the Daimyo Gyoretsu features a parade of people dressed in historical costumes participating in the Atago Sanctuary Festival. Finally, in winter, the Inukko Matsuri has been held for over 400 years to protect the city from disasters and diseases; the event also provides an opportunity for a side festival that pays tribute to our best friends, the dogs.

The Inukko Matsuri: a festival to protect the city

The Inukko Matsuri is a festival of pleasant surprises. This local folk event in the Yuzawa region has been held annually since the Genna era (1615-1624), over four centuries.

At that time, the region’s residents suffered from attacks by bandits called “hakuto”, even in broad daylight. Fortunately, the feudal lord of Yuzawa eventually managed to get rid of them. The festival was started as an opportunity to pray that the city would no longer have to fear bandit attacks and that life could continue peacefully. To this end, the inhabitants began to make rice powder figurines in the shapes of dogs and cranes and placed them as offerings at the entrances and windows of all houses on the evening of the Moon’s New Year (January 15).

In recent years, a festival dedicated to domestic dogs, especially the Akita Prefecture breed, the Akita inu, has developed from this festival. The purpose is to thank the dogs for their loyal service to their owners. On the second weekend in February, the villagers of Yuzawa carve beautiful sculptures of temples in the snow, guarded by dogs that resemble the powdered rice figurines of the traditional festival.

This event attracts many tourists, often bringing their loyal dogs. They browse the lovely, detailed sculptures while enjoying dog races, dog cafés and other activities organized to entertain visitors.

At sunset, the golden light shines on the snow temples and the site transforms into a fairytale landscape. If you love Japanese food, you will find many stands to taste the local specialties, including the Inaniwa Udon.

While Yuzawa’s inhabitants have a talent for sculpture, they also have a gift for drawing, which is evident during the Tanabata festival. The festival usually takes place on July 7, but in Yuzawa, it is held in early August.

Tanabata, also known as the “Star Festival”, is a tradition originally from China which celebrates the romantic story of two celestial lovers with cursed fate. Separated by the Milky Way, they can only meet once a year: on the seventh night of the seventh month, July 7.

Nowadays in Japan, Tanabata is the time to write your wishes on colorful banners so that they can be fulfilled by the legendary couple, Vega and Altair, known as Orihime and Hikoboshi in Japanese.

In Yuzawa, the legend has been changed a bit from tradition, and the festival is unique from Tanabata festivals in other parts of Japan. It is said that during the Edo Period, a princess from Kyoto – then the capital of Japan – married a lord from Yuzawa and was forced to leave Kyoto to settle here. Far from home, the princess became homesick, and out of compassion for her, the residents of Yuzawa decided to create drawings and decorations that they displayed in the city to remind her of Kyoto.

Since then, every year, in addition to the many banners that color the streets, the inhabitants have decorated Yuzawa city with drawings of women painted on large lanterns made of paper. These hand-made pieces of art are different every year and created in many styles; most are traditional, but some are more modern and evoke the style of manga.

One can walk through the lively streets among the elegant drawings which are illuminated in honor of the beauty of women.

The Daimyo Gyoretsu of Yuzawa, a parade alongside the Atago Sanctuary Festival

Perhaps the pinnacle of the cultural events of Yuzawa city, the Daimyo Gyoretsu is noteworthy. This traditional festival has been held every year in the fall, on the 4th Sunday in September for over 300 years!

Started in 1714, during the Edo period, the Yuzawa Daimyo Gyoretsu is a parade organized on the sidelines of the Atago Sanctuary Festival. At that time, the Daimyo, or feudal lords, had to travel annually to Edo (now Tokyo) on a trip called Daimyo Gyoretsu, and many of them passed through Yuzawa. In particular, the Lord of Akita never failed to stop and pray at the sanctuary of Atago during his journey.

It is believed that this festival began when the people of Yuzawa, seeing the Daimyo Gyorestu passing by, had the idea of recreating it in a parade during the Atago Sanctuary Festival.

Nowadays, the Daimyo Gyoretsu consists of a procession of more than 400 participants dressed in magnificent costumes from ancient times who portray the servants of a lord on horseback. They carry delicately decorated sanctuaries and march through the city. The procession also includes floats and a series of rickshaws decorated with lanterns, which carry dancers and children.

They form a procession about 2 km long, which starts from the sanctuary of Atago and proceeds through the city of Yuzawa. The parade usually starts at 9:30 am and lasts about five hours, with a two-hour break at noon.

Three seasons, and three different wonderful festivals to help you discover Japan’s cultural richness. The choice is yours!

You can find more information about the Yuzawa region on the website of the Yuzawa Tourism Office as well as on the Akita Prefecture Tourism Office website (in English). If you plan to come to Yuzawa to participate in its festivals, there are plenty of things to discover in the region. For my part, I was able to admire the autumn leaves in the Oyasukyo Gorge, discover the art of traditional Yuzawa kites with Mr. Ono and stay in a luxurious ryokan, in the heart of breathtaking landscapes.

To get to Yuzawa from Tokyo, it takes about 4 hours via the Shinkansen Komachi line to Omagari and then the local JR line to Yuzawa (be aware that prior booking is required for these Shinkansen).

You can also fly to Akita Airport and reach Yuzawa by public transportation (by bus to Akita station or by taxi to Wada station, then by train), or rent a car to explore the region in complete freedom.