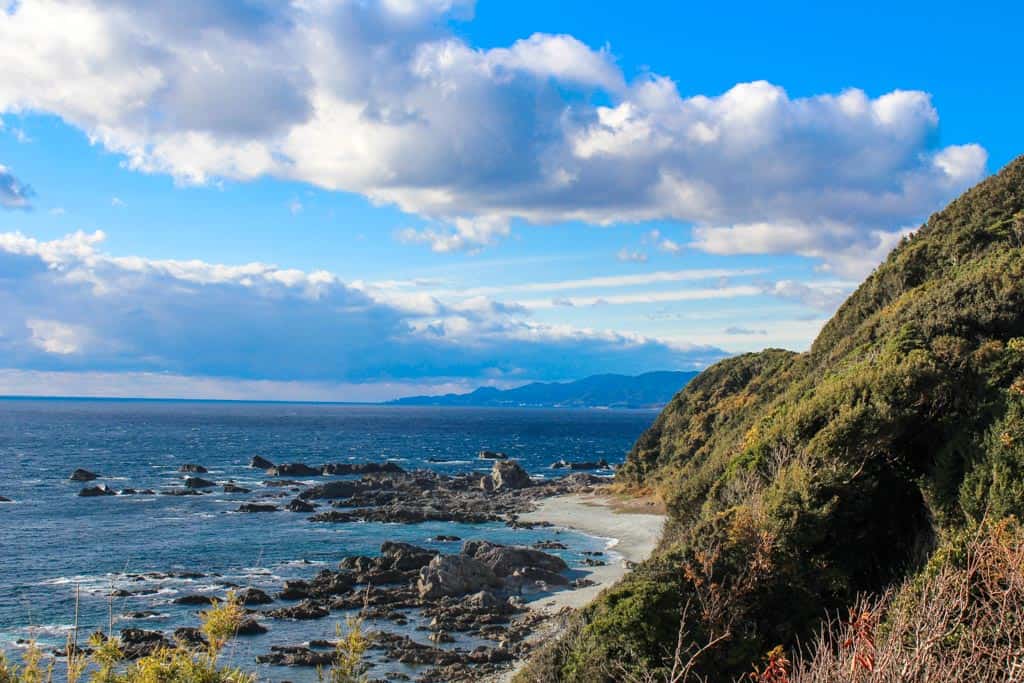 A Guide to Scuba Diving in Kushimoto and Other Top Sights

I remember watching a ‘making-of’ episode of a nature documentary a few years back, where divers plunged into icy cold waters wearing drysuits — a form of underwater overall designed to keep out not only the water but the temperature too. I felt cold just watching them and vowed never to dive in winter myself.

So you can well imagine my dismay as I rolled up to the Nanki Seamans Club on the south coast of Wakayama Prefecture just five days out from Christmas, with an hour of scuba diving on the schedule. Don’t get me wrong, I love diving, and though pure laziness has ensured I have yet to acquire my license, it wouldn’t be my first time submerged in the deep, so to speak. But I have a staunch aversion to frigid oceans and feared that’s what I’d be up against in Kushimoto (串本町).

In saying that, when it comes to diving in Japan, Wakayama Prefecture is among the best locales in the country. And if you’re going to dive in Wakayama, Kushimoto is arguably the place to do it.

It was a brisk morning as we unloaded from the car, a breakfast buffet still swirling in my distended stomach, but the water buffeting Kushimoto’s rocky coastline was a brilliant shade of blue, gleaming in the winter sunshine. It looked inviting, as water tends to on this stretch of the Pacific Coast, but I knew better than to trust my eyes where temperature was involved.

I was greeted by my kindly, bilingual diving instructor for the day, Hirotaka, who assured me that the drysuits provided by the Nanki Seamans Club were more than adequate for the waters of the Kii Peninsula this time of year. In fact, he informed me, the water temperature was around 21 degrees Celsius. I’ll believe it when I feel it, I thought.

In any case, by the time we trudged down toward the beach (the point from which we’d start the dive), kitted up in enough diving gear to feel like an astronaut on a planet with quadruple the force of gravity, I felt I had mentally prepared myself for whatever the water deigned to throw at me.

I had a brief re-orientation on which signals to use: thumbs-up means “I need to go to the surface… now”; counterintuitively, it’s not the signal for “I’m all good.” Then Hirotaka gave me a quick reminder of how to use the equipment, what the plan of action was, and what kind of aquatic creatures we might encounter. Formalities over, into the ocean, we plunged.

Diving in Kushimoto: Into the Deep

As it happens, the water wasn’t cold at all; my dry suit effectively provided an impenetrable barrier to all external stimuli. So much for my melodrama. It was, however, stunning and a great introduction to diving in this part of Japan.

We glided effortlessly through waters bereft of other divers but, surprisingly, this close to shore, teeming with fish. We swam over corals home to bright blue sea slugs, grumpy-looking crabs, and prickly sea urchins. Lionfish with ostentatious manes hid in underwater hovels. Clownfish and neon damsels glowed against the dull sediments below. It was a full and vibrant underwater world hiding in plain sight. And to think I was having second thoughts about diving.

Hirotaka was also equipped with a drawing pad, like an Etch A Sketch that worked underwater. With this, he indicated the name of each fish I was wildly flailing my camera at, or other useful info, like “that sea urchin is not delicious.” So much for bringing my chopsticks.

For divers in Wakayama, it’s rare to be underwater with so few other people. This was partly a product of these unprecedented times, I am told, combined with it being one of the least popular seasons in which to dive in Japan. But if having the open ocean virtually all to myself is the tradeoff to make for slightly ‘colder’ water, then I’ll take that any day.

We followed the scuba diving session with a delicious lunch of katsuo ochazuke (raw bonito topped with a savory sauce and rice with tea poured over it) at Mankou — a favorite restaurant for the Kushimoto locals — and headed along the coastline to our accommodation for the evening.

En route, we passed some of the most marvelous rock features and historic sites in Wakayama Prefecture. Firstly, we parked in a roadside layby looking toward Cape Shionomisaki, a rugged stretch of coastline reminiscent of northern Europe, topped by the white-walled Shionomisaki lighthouse, which was first lit in 1873. After a detour down a scraggly path to the beach at the cape’s base, we ascended the almost 50-meter-tall structure to be greeted by sprawling views of the seascape and evergreen hills clumped on top of the Kushimoto coastline.

Next, we stopped at Hashigui-iwa Rock, a rock bridge whose name literally translates to “bridge pillar rocks.” Though to me, they look more like chipped dragons’ teeth protruding from the water — or the sand depending on the tidal level — the name has a mythological connection. It’s said that the monk Kobo Daishi, who founded the Shingon Sect of Buddhism around the turn of the 9th century, was building a bridge from the mainland to Oshima Island when a demon prevented him from completing it; what remains are the pillar-esque rocks of Hashigui-iwa.

A 30-40 minute drive from Kushimoto Town will take you to Nachikatsuura Town and Katsuura Onsen. This is where I wrapped up the evening at Hotel Urashima, with a rather generous buffet-style meal, which included everything from fresh sushi to a distinctly Irish-tasting stew and more scintillating views of the coast from the hotel’s cave onsen.

Reflecting on the day from a steaming pool of water carved into the rock wall, I had to admit the Kushimoto coastline was indeed an excellent spot for diving in Japan — even in winter. But if you don’t want to get wet, you can enjoy it equally from the comfort of dry land.

How to Get to Kushimoto