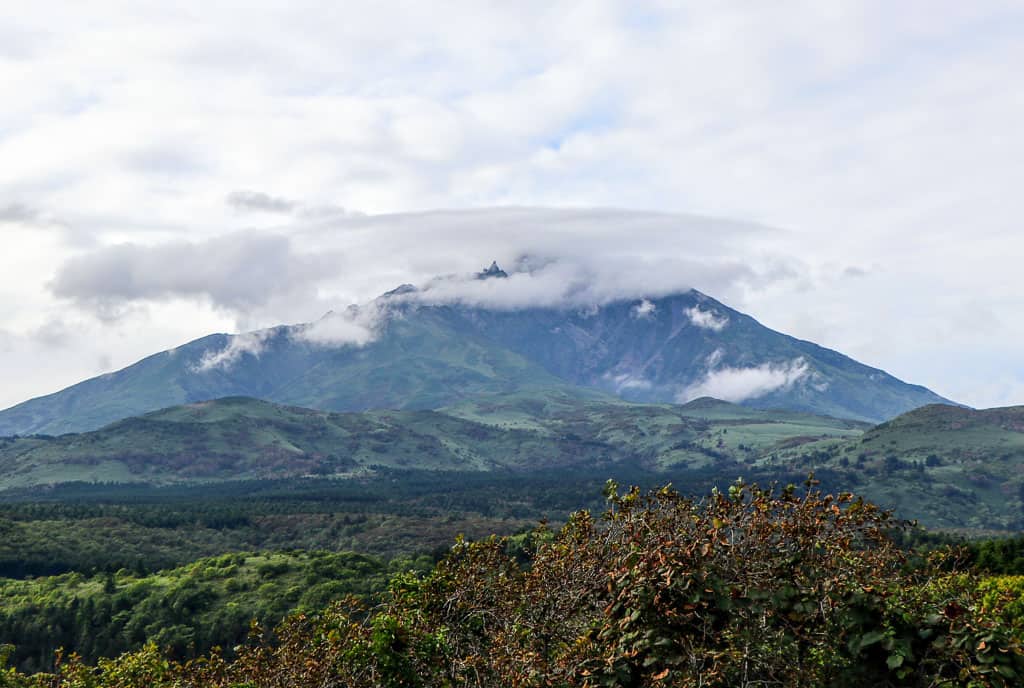 By Lily Crossley-BaxterDecember 3, 2020No Comments

The mist was the defining factor of my experience on Rishiri Island (利尻島, Rishiri-tō). It became a welcome companion to my explorations, coiled around the jagged peak of the eponymous central mountain, floated above the surface of the lakes, and greeted me in the morning as I gazed out across a cup of steaming local tea. It encouraged me to look for more than a simple view and introduced me to a different side of this small island of Rishiri off the northern tip of Hokkaido.

Famed for alpine flowers, challenging mountain ascents, and delicious seafood, the remote island of Rishiri is perched 20km off the coastline of northern Hokkaido. Paired with neighbouring Rebun Island, it forms the Rishiri-Rebun-Sarobetsu National Park and is a haven of outdoor activities. The island was formed by volcanic activity and centres around the now-dormant volcano known as Mt. Rishiri — an Alps-Esque peak depicted on the front of Hokkaido’s most popular souvenir sweets. The island’s 5,000 residents live in two main towns — Rishiri Fuji to the north and Rishiri Town, to the west, relying on fishing and tourism to make a living.

My first brief sighting of the elusive 1,721m-tall Mount Rishiri (利尻山, Rishiri-zan) was from the shore of Himenuma Pond (姫沼). On clear days, there is a chance to see the Diamond-Rishiri phenomenon when the human-made lake’s calm surface acts as a mirror. Almost perfectly round, the pond is circled with a wooden walkway that allows easy access while also protecting the plants and wildlife surrounding it. Swathes of bamboo grass and natural forests fill the park while small birds darted between reeds as we made our way along the boards.

Continuing our explorations of the island’s east side, we headed to the un-promisingly named Otatomari Swamp, a mere 15-minute drive away. However, rather than the anticipated muddy pools, I’m surprised with a glittering blue pond, complete with what would be a majestic mountain view. While I’m tempted by the freshly cooked scallops being grilled in the small lake-side cafe, I opt instead for a glorious swirl of local rosehip and bamboo grass ice cream and enjoy it outside, willing the mountain’s tip to reveal itself, but ultimately failing.

After sating my sweet tooth, we headed to a nearby spot known for another sweet-treat, the famous Shiroi Koibito biscuits. A popular omiyage (small food souvenirs for co-workers or friends) from Hokkaido, few know that the alp-like mountain on the packaging is actually Mt. Rishiri! The viewpoint from Numaura Observatory, also known as Shiroi Koibito no Oka or White Lovers’ Hill, offers a special certificate to those who propose here. Although I waited, I had as much luck in the proposal game as I did with the view of the famously jagged ridgeline.

Abandoning hope of the clear view, we headed back up to Rishirifuji, making a quick water stop at Kanro Spring Water. Flowing straight from the mountain, the water is said to take years to reach the spring, filtered through mountain rocks and nature itself. After a light walk through the cool forest and passing campers setting up for the evening, we reached the rocky stream, taking it in turns to balance our bottles beneath the bubbling water. Breathtakingly cold, the water is delicious — if such a thing is possible — and we end up re-filling more than once.

Back at our lodging at Rera Mosir, we’re joined for dinner by the charming host Mr Watanabe. Born and raised in Rishiri, he regales us with tales of his first ascent of the elusive mountain with his father at age 12. Now a trained mountain guide, he advises visitors on the trails and leads his own treks — explaining that the mountain is a serious and often risky endeavour. Along with sea-kayaking, cross-country-skiing, and bike rentals, the hotel is the ideal starting point for intrepid explorers.

Surrounded by a feast of grilled hoke (local mackerel), fresh sea urchin, and simmering seafood nabe pots, he trades jokes with returning guests who range from hiking couples to a group of exhausted university cyclists at the table beside ours. We meet staff member Yusuke, who, after meeting Mr Watanabe on the peak of Mt. Rishiri, left his salary-man life in Tokyo to work here, immersed in nature. As the local sake appears, it’s clear that the mountain-lodge atmosphere of Rera Mosir is the real key to its appeal.

After tea on the hotel deck the following morning, we made our way to Senposhimisaki Park (仙法志御崎公園) for breakfast with an unusual guest. Amid the rocky volcanic coastline, orphaned seals spend the summer in safe enclosures, and fresh fish makes the perfect ice-breaker. Picking up a 100-yen bowl of fish from the small store, we make our way to the pool edge, using chopsticks to feed our new and enthusiastic friend.

We passed a group of chatting workers along the slope as they sorted and shucked the freshly-caught sea urchins, which are famed for their delicate, creamy texture. Mesmerized by their swift, dextrous movements, I watched as the spiky shells are cracked to reveal a bright core of yellow. Knowing I would soon be attempting the same, I watched for tips before a final wave goodbye to the seal, already anticipating his newly approaching guests.

Heading 15-minutes along the west coast, we reached Kamui Kaigan — a small seaside park where you can try the island’s foodie crafts yourself. Jumping straight in, we were handed dark urchin-spotting ‘box glasses’ and used nets to scoop up the spiky creatures from the rocks — especially difficult on a rocking fishing boat!

As we carried our haul back to the preparation area, we admired the delicate shells before applying the deft-crack technique we learned from our teacher and revealed the soft golden insides. After gently scooping it out, we tried the freshest of delicacies, still carrying the fresh flavour of the sea.

Another local favourite (and local mascot character) is the natural Rishiri kombu sea kelp, and one of six kinds found in Hokkaido. We were given a large, dried piece, which we then sliced, folded and cut it into three separate forms — learning the Japanese motto of ‘don’t waste’ known as mottainai — in the process. With a large, folded hanaori piece for soup, ridged edges sliced for stock-bags, and chunks cut for snacking on, it was impressive to see how a single item could produce such a variety of products.

How to Get Around Rishiri Island

While you can bring your own car if travelling by ferry, it may be easier to use one of the options from the island itself. There are car rental services including Rishiri Car Rental and Nippon Rent-a-car close to Oshidomari Port and Kameya Car Rental close to Kutsugata Port. Many services also offer pickup from the airport.

The island also has a popular cycling route covering the north-west side of the island, with a regular road on the south-east side. The combined route is approximately 60km long and takes around 7.5 hours at a regular pace. Bicycles are available for rent at both ports and from accommodation across the island (sometimes for guests only). Port Information desks can provide up-to-date information regarding availability or visit Rishiri Plus for details.

Local company Soya Bus offers two sightseeing bus routes between May and September, stopping at the main sightseeing spots. The twice-daily tours take between 2 – 3.5 hours and cost between 3,200 and 3,400 yen for adults and 1700 – 2,000 yen for children. There is also a regularly scheduled bus service around the island, with a day-pass available.

How to Get to Rishiri Island in Hokkaido

Rishiri Island can be reached by ferry or plane, as it has two ports and a small airport to the north of the island. Heart Land Ferry runs 2 – 3 services between Wakkanai and Rishiri per day, arriving at Oshidomari Port. The journey takes one hour and forty minutes and costs between 2,550 yen for second class seating to 5,180 yen for first-class lounge seating. From Rebun Island, they operate one boat a day — it takes 45 minutes and costs between 920 yen and 1,960 yen.

For more information about Rishiri, visit their official website (Japanese only.)

After we explored Rishiri’s coastlines to their fullest extent, we completed our circle and arrived back at Oshidomari Port. We spotted Tsuki-Cafe with its sea-view windows and settled in for a snack as the ferry approached in the distance. Run by a local chef who is a fisherman, you can try smoked mackerel-topped ramen, however, it was the kombu-brownie that caught my eye. With a dust of kombu salt on the whipped cream, the added chewiness of the Rishiri-kombu was unexpected, but not unwelcome. It was the perfect goodbye to the island and a sign of my adventure — not what you might have anticipated, but all the more delicious because of it.