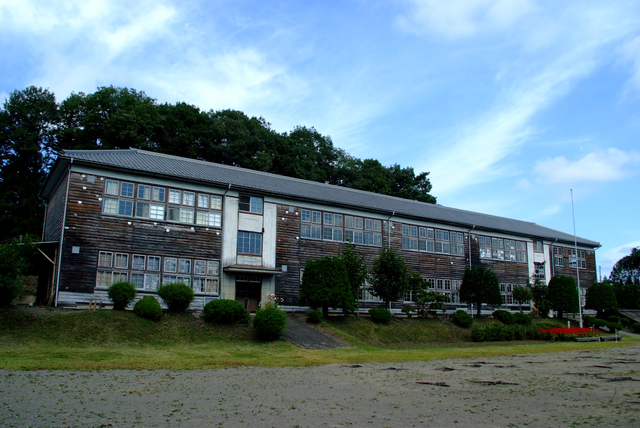 Isama District , ranked in ‘the 100 most beautiful village in Japan’ and full of arts! 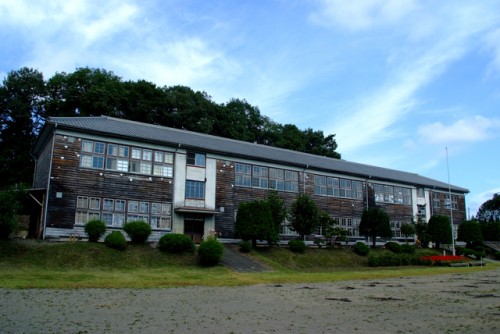 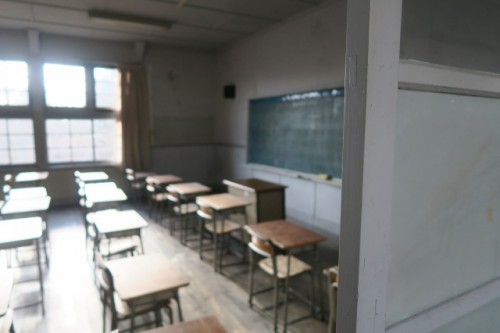 I’m not sure if it’s just me, but recently I’ve been a little obsessed with abandoned places. I’ve been tracking them down across Japan and even looking at some in England for future reference, but I can’t really explain why they are so captivating to me. Perhaps it’s because of the stories they tell through their broken roofs and the old curtains billowing through the holes where windows used to be, or perhaps it’s the creepy, off-limits feeling that consumes my body the moment I see them. Regardless, with it’s tonnes of abandoned buildings both on and off the radar of common knowledge, Nakanojo is a playground for creepy, dangerous, old, abandoned buildings and, unlike other places I’ve visited, there were no fences or warning signs. The people of Nakanojo are very open about it and that meant I could get up close and personal with the creepy history surrounding each place. 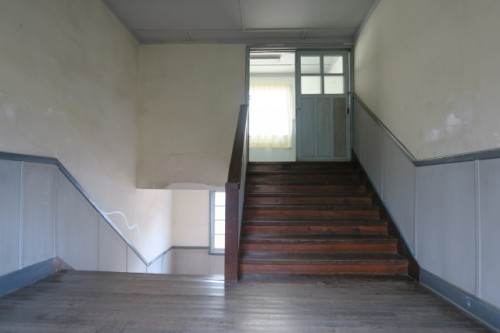 Isama Studio: The abandoned school with rows of creepy beds 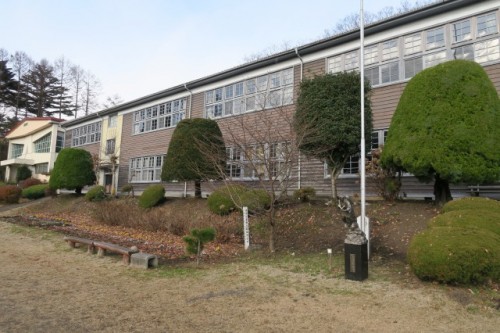 On the outside, Isama studio doesn’t look that abandoned, considering the bottom floor is dedicated to memorabilia, mainly from the first film that was made there, “Nemuru Otoko”; the anniversary film made in commemoration for the population of Gunma reaching 2 million in 1993. The bottom classrooms and hallways were filled with pictures, photographs and even big, old fashioned cameras which, at first, seemed so grand that I wasn’t sure that they were actually real. But for me, taking a trip upstairs was the best part. 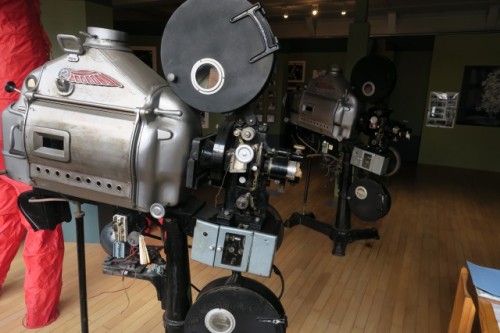 I’m not sure whether I was supposed to venture up there, but I’m very glad I did. The halls echoed and creaked with emptiness as I tip toed down the hall to avoid breaking the perfect creepy, eeriness that filled the rooms. The first few rooms just appeared to be empty classroom, but the further I walked, the more they filled up. The next classroom had those old styled desks with tables attached and the final two were filled with stripped, black beds. As my brain scrambled around for a solid explanation, it began to fill the pieced together images from different hour movies I had seen. And it was at that moment that I began to get the feeling that I was not supposed to be here. Other small and empty rooms added a nice final touch to the creepy atmosphere that swelled inside my body and I was ready to head back. 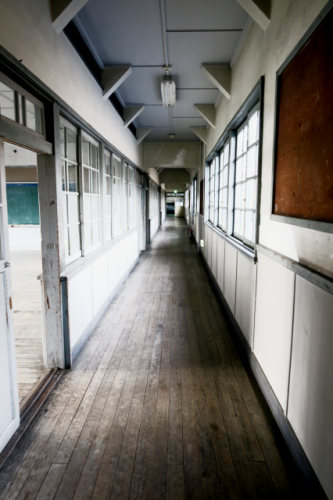 I was later having a conversation with a coffee shop at Tsumuji who told me the beds were because Isama studio was used as lodging for film crews and artists who visit the area for the famous art festival, Nakanojo Biennale. And while this simply explanation kind of ruined the magic a little, a spark was kept alight just thinking about how creepy it would be to spend a night in an abandoned school in one of those haunting black beds. 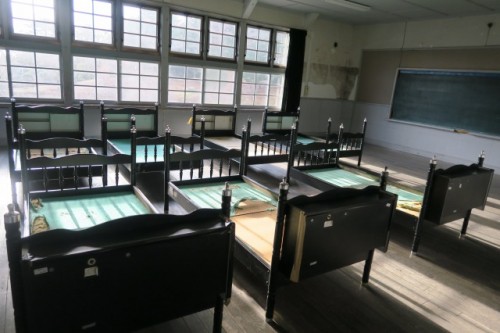 Entry to the studio is free but is closed from January 1st – 3rd and weekdays from January to March. It’s open everyday from April to the end of December, 9am – 4pm.

Every other year, Nakanojo turns into a playground for artists and art lovers around as exhibitions merge into existence amongst the existing buildings and architecture. From onsen resorts, to old school buildings and even the high street, everything can be and is turned into art. In it’s daily life, Nakanojo naturally contains a world of art and inspiration in my eyes, yet, with the introduction of unique pieces from artists not only in around Japan, but also around the world, the town is revived with the essence of art discovery. By chance, I actually met one of the directors of the events running a cafe in Tsumuji, who told me all about the event and showed me pictures of previous events. I looks completely amazing. From small figures lurking in abandoned buildings to large displays of mind boggling artwork, there is something for everyone to discover and I’d love to see it for myself. Nakanojo Biennale 2017 will be held from 9th September to 9th October, with many exhibitions held Isama studio park and Kyugotanda School. I’ve already made a note in my diary. 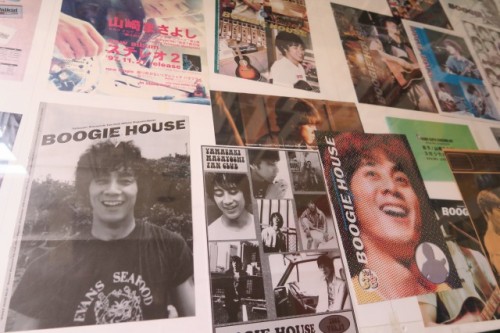 I wanted to take a peek inside and my taxi driver even tried each door a few times for me, just incase, but it seems this abandoned building is for outdoor viewing only. Nevertheless, the exterior of the building was, to me, far more beautiful, archaic and grand than at Isama studio. And, having been established in 1909, it really should be. It was given a few more simple modern touches since then but you probably wouldn’t recognise them through simply peering through the window as I was. 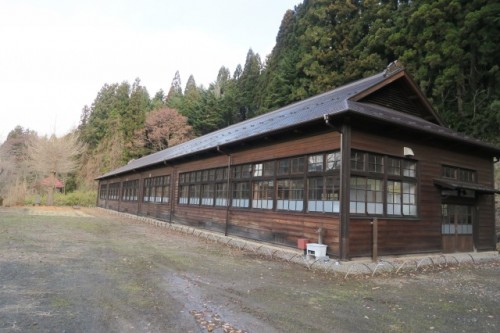 The former Gotanda school was designated an important cultural property in 1988, completed with old records that show the style of architecture and costs as well. It may be a simple, single story wooden building with a half hipped roof but it still holds tonnes of character, even simply from the outside. However, if you walk around the back of the building, the windows are low enough to have a peek into each room if you like.

You can also enjoy a pleasant foresty walk between Isama studio and Kyogotanda, which Im told by the locals, would take around 30 – 40minutes to complete. If the weather’s good, it should make for a nice stroll and it will avoid some costly taxi prices. 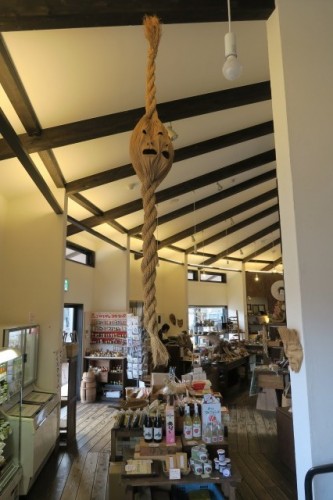 Everything here is locally sourced, from the cafes selling local vegetables, to local craftwork, to traditional cultural performances from the local, to artwork and even ice cream. Tsumuji may be a small complex of only around seven shops but it is a beautifully modern and stylish wooden hut befitting of such a artistic community. You can enjoy a feet foot onsen, containing that famous vitamin and mineral rich water or simply have a light lunch on the wooden decking outside. It’s a fantastic place to relax and enjoy the culture of Nakanojo and if you’re lucky, you may even be able to enjoy a workshop or an art exhibition. 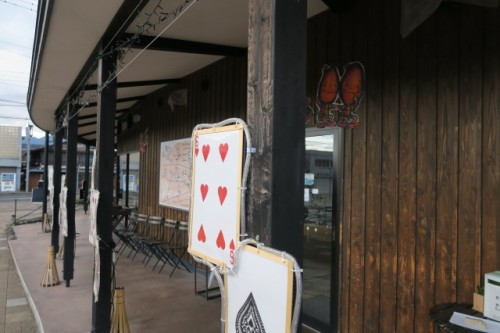 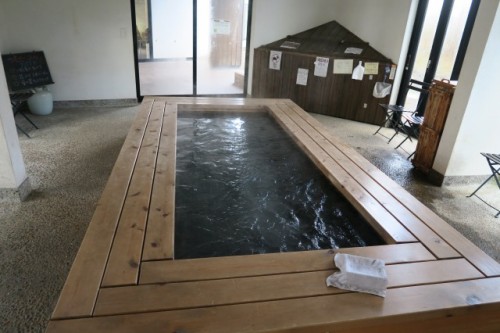 Tsumuji is closed every Thursday, but is otherwise open from 10am – 7pm, though tenants may have their own opening and closing times. 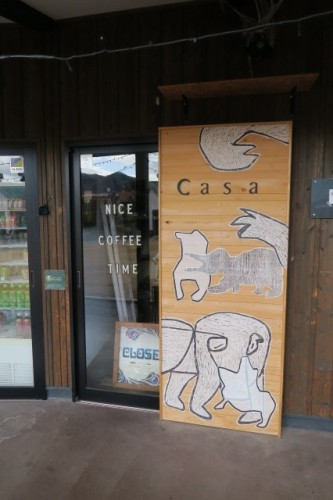