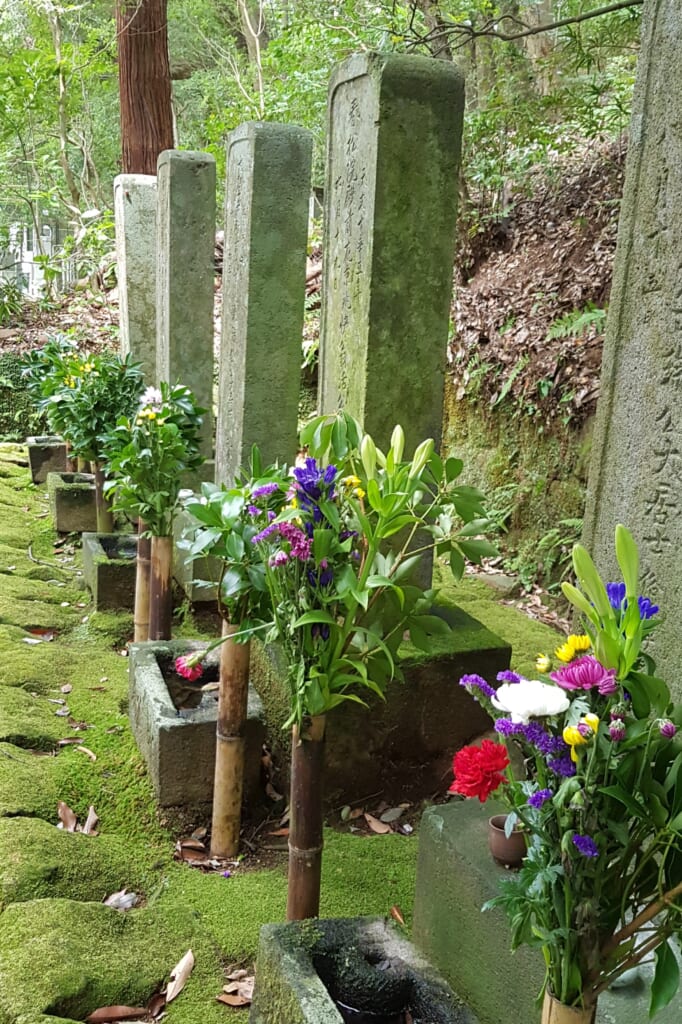 Japanese traditions contain numerous customs and rituals that may seem unusual to Westerners. However, these customs make sense when one considers the religious and philosophical teachings of Buddhism and Shintoism. The traditions surrounding Japanese cemeteries (墓場, hakaba) are, of course, no exception, and may even surprise you with their numerous rituals.

Japanese Cemeteries: What Makes Them Unique?

Firstly, let’s ask ourselves what makes Japanese cemeteries so unique. In fact, I’d say that they are so unique and fascinating that they may deserve their own visit. When we think of taking a vacation in Japan, the cemetery is probably not the first place we would think of visiting. But there is perhaps a no better place to get a glimpse of the close ties the Japanese have with the afterlife and Buddhism.

Death is seen as something impure in Shintoism. As a result, most funerals in Japan follow Buddhist rituals, and the deceased is cremated and buried in a family grave. Unlike Europe or America’s burial customs, the tombstone (墓石, hakaishi) is the entire family’s marker.

In case you are wondering what the wooden grave markers behind the tombstones mean, here is the explanation: According to tradition, the deceased receives a Buddhist name (戒名, kaimyō) from a priest after their death. This name prevents them from entering the mortal world if their worldly name is uttered. Traditionally, old-fashioned kanji are used for the Buddhist name to avoid the name falling in everyday conversations. This name can be on the wooden grave marker, called itatoba (板塔婆), behind the tombstone. Occasionally, the name of a Buddha or Sanskrit characters are written on the grave markers.

Typically, the Japanese family grave consists of a stone monument with space for flower decoration, incense sticks and water. The individual names of the deceased are, in some cases, engraved on the sides of the tombstone. Although this custom differs from region to region, the living family members’ names are usually colored red to distinguish them from the deceased.

The space reserved for water is meant to prevent the deceased from getting thirsty, but it can also be filled with sake if the ancestors liked it.

The traditional shape of a tombstone is a pagoda made of five stone blocks called the Gorin-tō (五輪塔). Each block represents the five elements of Buddhist philosophy – earth, water, fire, air and space. Each character, in Kanji or Sanskrit, is engraved on the grave monument’s respective blocks. This pagoda shape is typically the style of older cemeteries, while modern tombstones tend to have a columnar shape.

Japanese Cemeteries As a Culture

The Japanese cemeteries, as we know them today, developed over the past several centuries. Between the third and seventh centuries, persons of importance were buried in massive burial sites called kofun (古墳). The styles of the kofun (also known as barrows) could vary from round or square tombs only a few meters wide to colossal kofuns that resembled a keyhole from a bird’s-eye view.

Some of Most Famous Japanese Cemeteries and Burial Sites

One of the largest tombs in the world is a Kofun called Nintokuryo in Sakai, Osaka. The tomb includes a moat and spans approximately 470,000 m². Built in 399 in honor of the Emperor Nintoku, Nintokuyro (仁徳天皇陵) was constructed in the form of a keyhole, visible from the sea.

With more than 200,000 graves of Buddhist monks, the Okunoin cemetery is the largest Japanese cemetery. It is located in the Kansai region on Mount Koya (koyasan, 高野山) and surrounds the temple of Okunoin. According to the legend, no dead people rest on the Koyasan – only souls waiting to continue their journey onto the spirit world.

The largest urban cemetery in Japan is the Tama Cemetery (tama reien, 多摩霊園) in Fuchu, Tokyo. Erected in 1923, the Tama Cemetery covers 128 hectares and is the final resting place of several greats in Japanese history that include: writer Mishima Yukio (1925-1970); 33rd Prime Minister of Japan, Hayashi Senjūrō (1876-1943) and artist Okamoto Tarō (1911-1996).

On the edge of the Tokyo Tower, Zōjō-ji Temple is known for its numerous Buddhist Jizō statues. The statues, decorated with red caps and windmills, represent unborn children, miscarriages and abortions.

Japanese cemeteries can, of course, not only be found in the outskirts of large cities or holy places near temples but in rural areas near rice fields, behind gardens or in the middle of the forest. These old tombs, mostly overgrown with moss, will surely cast a spell on you too.

The Obon Festival – In Memory of the Deceased

The Obon festival (obon, お盆) is a Buddhist tradition for the souls of deceased ancestors and has been celebrated in Japan for more than 500 years. Every August, ancestors return to the mortal world to reunite with their family members. The 2020 Obon was celebrated from August 13th to the 16th.

One custom during the Obon festival is to offer food to Buddhist temples or Shinto shrines. The Buddhist variant of the in-house shrine is called butsudan 仏壇, while Shinto house altars are called kamidana 神棚. In addition to the offerings, the families also set up impaled cucumbers and eggplants to symbolize horses and cows. The cucumber, the symbol of the soul horse (精霊馬, shōryō-uma), is supposed to bring the soul of the deceased quickly into this world to his family. The soul cow (精霊牛, shōryō-ushi), symbolized by the eggplant, slowly takes the soul back into the afterlife.

Bon-Odori – The Dance to Welcome the Souls of the Deceased

The Obon festival is also accompanied by the bon-odori (盆踊り) dance, which welcomes the deceased’s souls into the mortal world. The dance and music differ from town to town.

The Bon-Odori has its origin in the Buddhist, ritual dance of nenbutsu (念仏), which was performed to visualize the Buddha.

Nowadays, the bon-odori is a popular dance festival in which young and old locals and tourists can participate. So, if you have the opportunity to visit a bon-odori festival, remember the simple dance steps and join the dancers!

Another traditional ritual is the okuribi 送り火 (send-off fire). The fire is supposed to accompany the deceased’s souls back to the afterlife at the end of the Obon festival. One of the most famous okuribi is the Gozan no Okuribi (五山送り火, “Escort of the Five Mountains”). It takes place annually in Kyoto and is also known as Daimonji 大文字. During the okuribi, five bonfires are lit on mountains around Kyoto to take the deceased’s spirits back to their world.

The characters or shapes of the five bonfires are as follows:

So, next time you walk past a Japanese cemetery, take a closer look at it. Discover the many Buddhist elements hidden here and there, and let yourself be enchanted by Japan’s rich culture, with all its traditions and rituals.