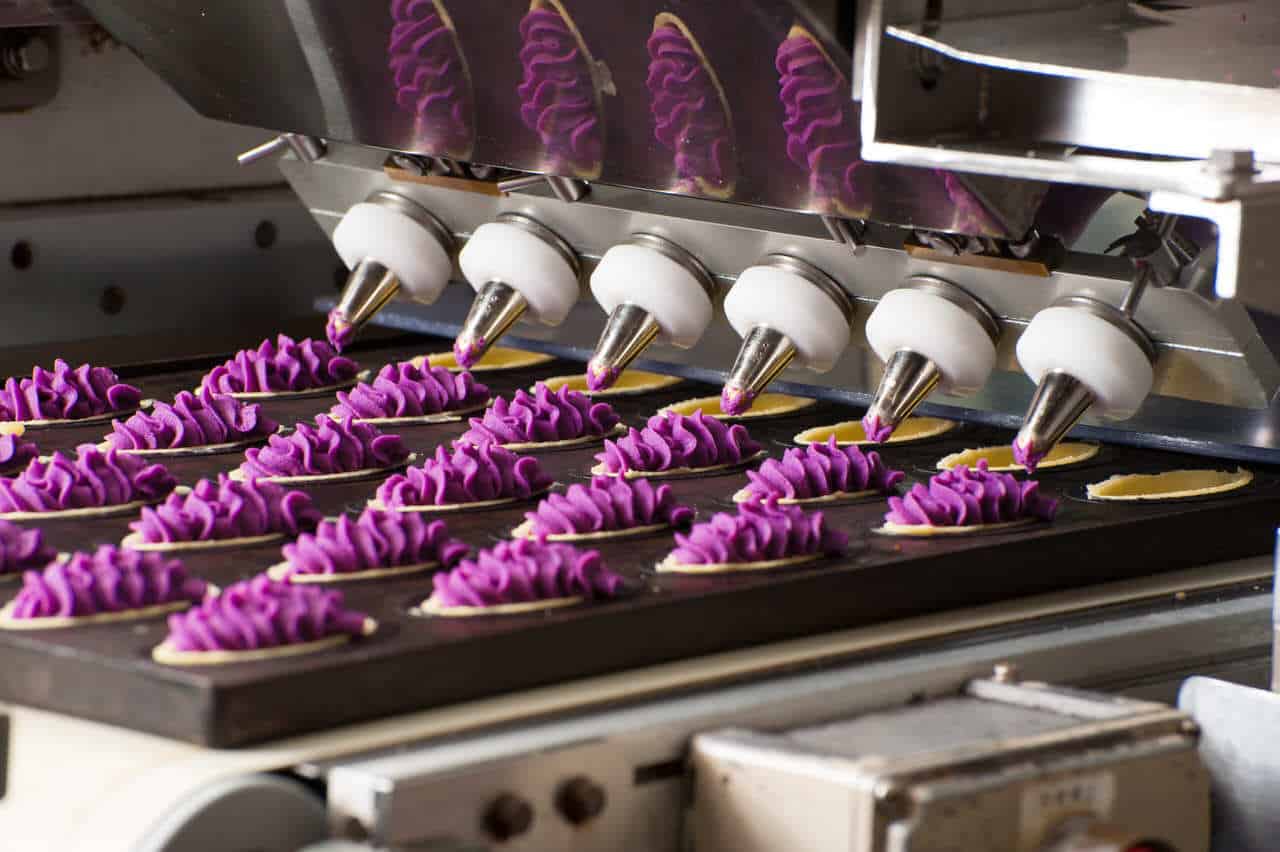 If you’ve ever been to Japan, you’ve probably found yourself browsing the okashi (お菓子 Japanese snacks and sweets) area in a supermarket or konbini (コンビニ convenience stores) over and over again. It is impossible to pass by and ignore their striking and fun packaging. Japanese sweets are not only delicious but also reasonably priced, making them one of the most popular souvenirs for those who visit the country.

The Japanese sweets industry is highly competitive, with seasonal products and special flavors appearing virtually every month sold only for a limited period of time. But as Japanese sweets come and go, some have endured the test of time for generations and have become classics.

Okashi Goten, a company based in Okinawa, is a clear example of a classic sweet. Their products, especially the purple sweet potato tart, are a beloved and popular symbol among islanders and throughout Japan. Thanks to the Voyapon Store, you don’t have to travel to Okinawa to try Okashi Goten sweets. You can buy them online and taste the essence of Japan’s most tropical islands.

You’ll know autumn has arrived in Japan when you hear the familiar “yaaaakiiimoooo” (焼き芋 yakiimo is a roasted sweet potato) as you stroll through the streets. But while many people in mainland Japan enjoy the popular sweet potatoes under the red autumn leaves, Okinawans can indulge in this treat year-round.

I discovered beni imo (紅いも), the purple sweet potato, during my first trip to Okinawa. It is impossible to ignore its presence as this product is a superstar of the island, so I decided to give it a try. Without a doubt, the first thing that caught my attention was its striking purple color. At first, I thought it was made with grapes, but after the first bite, I discovered the unmistakable taste and texture of sweet potato.

But what is so special about beni imo? In addition to its deliciously sweet taste and intense purple color, it is a health food that’s been classified as a superfood.

Although beni imo is one of Okinawa’s most typical crops, its origin is not Japanese. It is believed that this sweet potato was brought to the Ryukyu Kingdom in the early 16th century by Noguni Sokan, a Ryukyu government official who traded with China. Since then, Okinawans cultivated beni imo, and was later introduced to mainland Japan.

Today, beni imo is one of Japan’s most popular Okinawan foods known for its health benefits. It is a high-fiber food, and a single potato contains four times the daily dose of vitamin A needed for an adult and half of the daily requirement of vitamin C. This root vegetable also helps to improve blood sugar levels and reduce the risk of cardiovascular disease. As if these weren’t enough, there are ongoing studies on the purple sweet potato for its anticancer, antifungal, and antibacterial properties.

Although beni imo is a well-known product from Okinawa, its popularity increases when it reached Yomitan village. Also known as the “beni imo hometown” (紅いもの里, beni imo no sato), this crop is an important part of the local culture for the Yomitan people. If beni imo has become nationally famous, it is undoubtedly thanks to Okashi Goten, an Okinawan sweets company headquartered in Yomitan.

Okashi Goten: The Birthplace of Japanese Sweets Made with Beni Imo

The best place to learn about the history of beni imo is Okashi Goten, so I couldn’t leave Yomitan Village without visiting this iconic place. There, the staff starts by telling me the history of the company. “The roots of Okashi Goten begin in a small sweet shop founded in 1979 and initially dedicated to the sale of donuts, chocolate cakes, and pies.“

(…) “However, in 1986, the shop was commissioned to make sweets using purple sweet potato to revitalize Yomitan village through this crop. Until then, there was no other Japanese sweets made with beni imo, and the main purpose was to make the sweets as natural as possible, without color additives or preservatives, while using Okinawan ingredients.” This was the birth of Benimo Tart, the most iconic and popular product of Okashi Goten and Okinawan sweets.

In a short time, Benimo Tarts increased in popularity among Okinawans and mainland Japan, especially after it was added to the catering service of some Japanese airlines during their routes to Okinawa. Okashi Goten’s staff explains to me the keys to Benimo Tart’s success: “Everyone was impressed by its purple color, as the sweet potato is normally yellow or orange. When they tasted how delicious it was, people bought it as a souvenir or recommended it to their family and friends. In the end, everyone wanted to try the Benimo Tarts.”

Okashi Goten and Its Commitment to Yomitan and Okinawa

Thanks to the success of Benimo Tarts, the small sweets company began to grow and expand to other areas of Okinawa. A factory was set up in Yomitan, and other stores were founded in different locations on the island.

In Yomitan Okashi Goten’s store, the manufacturing process is done in front of windows so that everyone can observe how these delicious sweets are made. The company has also been expanding its product line. Apart from the famous Benimo Tart, which has been certified halal by the Nippon Asia Halal Association, there are dozens of regular products and other special seasonal products. If you are not a sweet potato fan, they also have sweets in other flavors, such as chocolate or kokuto (Okinawa black sugar).

In 2005, Okashi Goten’s flagship store was established in Yomitan village. In addition to the store, they also opened Hanagasa, a restaurant with a nostalgic atmosphere offering traditional Okinawan food made with local ingredients. Okashi Goten’s staff tell me that the company is very proud of its roots. “Okashi Goten was born here in Yomitan. Today, our products are popular all over Japan and are also making their way overseas. But Okashi Goten will never forget its roots and is committed to protect and preserve the people of Yomitan, as well as its traditions and culture.“

But in addition to Yomitan village, Okashi Goten wants to offer the essence of Okinawa in its products. “We want to make products with natural ingredients from Okinawa and that by tasting our sweets, people will feel the spirit of these islands. We want people to become fans of Okinawa, even if they have never been here.“

Okinawa is a wonderful place. Besides its breathtaking beaches, fascinating nature, and pleasant climate, it also has unique gastronomy, of which Okinawans are especially proud. At first, Okashi Goten and its beni imo became a symbol of Yomitan village and later became a symbol of Okinawa. This company’s goal is to make their customers feel like they are in Okinawa, wherever they are and whenever they want. At the Voyapon Store, you can find some of Okashi Goten’s sweets and taste a little piece of Japan’s most paradisiacal islands.