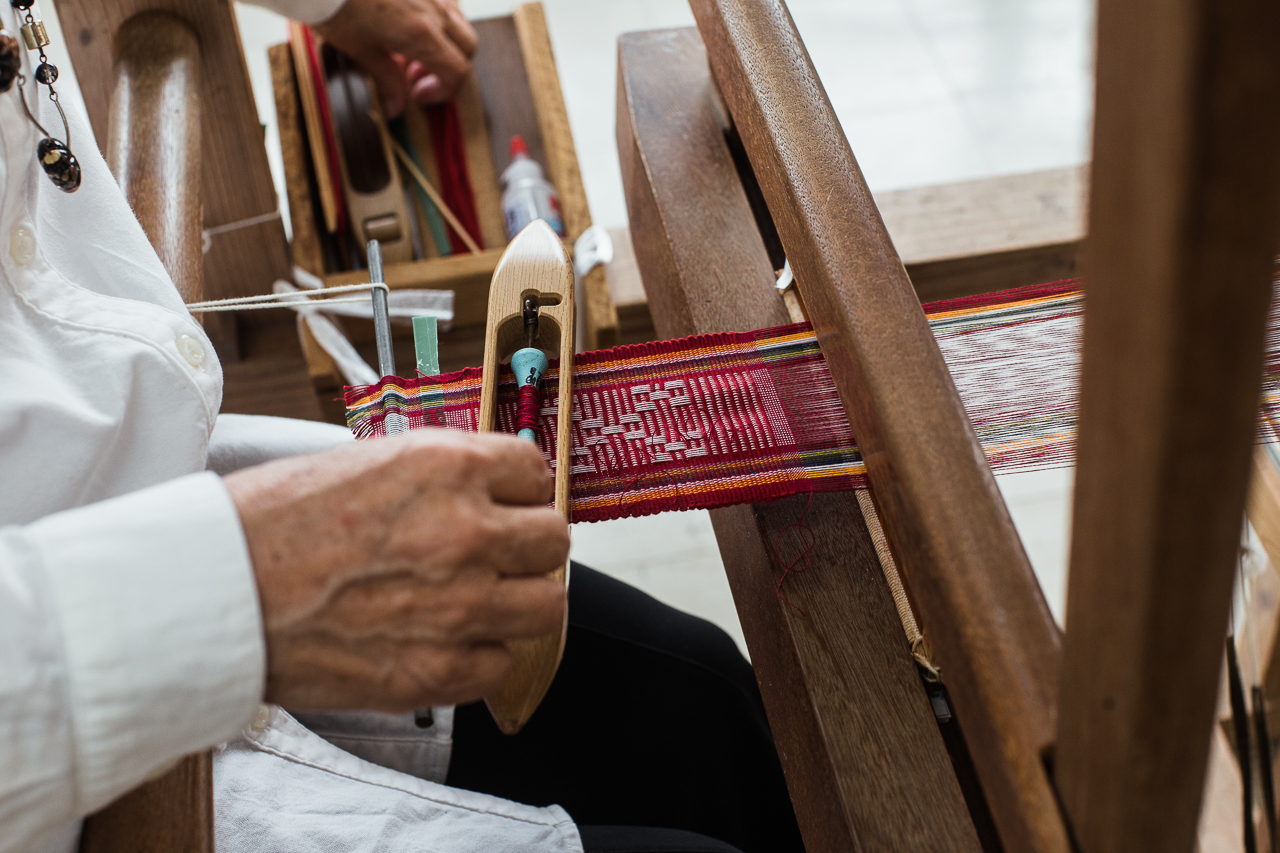 When you think of traditional Japanese culture, one of the first images that probably comes to mind is a beautiful woman wearing a kimono, Japan’s most famous and beloved garment. However, the kimono is only one example of the variety of Japanese textiles that have been developed since the first inhabitants of Japan. Like many other traditional arts, Japanese textiles have emerged through an interaction of external influences and local techniques and have defined many of the traditions that continue to this day.

In Okinawa, a prefecture that consists of about 160 islands in southern Japan, textiles play a very important role in the local lifestyle. Okinawan textiles were developed as items of trade with other countries and as offerings to the Ryukyu Kingdom. Since ancient times, Okinawan weavers and dyers have refined their weaving and dyeing techniques, giving shape and color to the culture and traditions of these islands.

Today, several production areas are scattered throughout the prefecture, and each has unique skills and characteristics that have been carefully passed down from generation to generation. Yomitan Village, located in central Okinawa, is the birthplace of Yomitanzan Hanaori, a textile used by the royal family of the old Ryukyu Kingdom. But today, you don’t have to be a nobleman to enjoy them. At the Voyapon Store, you can purchase products made by Yuntanza Hanaui’s artisans to add a unique Japanese touch to your lifestyle with textiles that are closely linked with Okinawa’s history.

What is Yomintanzan Hanaori? The History of the Japanese Textiles from the Ryukyu Kingdom

Hanaori is a type of Okinawan textile characterized by its floral and geometric patterns. Although there are different types, one of the best-known, thanks to its beauty and complexity, is the hanaori made in Yomitan village. Because it takes a lot of time, effort, and concentration to make, Yomitanzan Hanaori was highly prized during the Ryukyu dynasty and only members of the royal family and residents of Yomitan village were allowed to wear this type of textile.

The best place to learn in detail about Yomitanzan Hanaori is Yuntanza Hanaui Business Cooperative, a company of about 110 employees located in Yomitan village. There, Etsuko Shimabukuro, Yuntanza Hanaui Business Cooperative’s chairwoman, who has dedicated her life to weaving these traditional Okinawan textiles, explains its history. “In 1372, a man named Taiki was sent to China to deliver the first tribute from the Ryukyu Kingdom and establish a sea trade between the two kingdoms. Through this trade link, some textiles from China and other East Asian countries reached Yomitan shores, and local artisans began to develop new weaving techniques inspired by them. That was the beginning of Yomitanzan Hanaori during the prosperous Ryukyu dynasty. At that time, except for the royal family, the aristocracy, and the people of Yomitan, no one else could use it.”

In 1879, the Ryukyu Kingdom became part of Japan and became what we know today as Okinawa. From that point on, the hanaori culture began to disappear to make way for Japanese textiles and weaving techniques used in mainland Japan. When Okinawa became a battlefield during World War II, Yomitan hanaori disappeared completely.

The Rebirth of Yomitan Hanaori

When the war ended, hanaori workshops did not reopen, and the weavers also gradually disappeared. In 1964, a group of Yomitan volunteers started a movement to revive the art of Yomitanzan Hanaori based on some garments that had survived the war and the stories of the island’s elders. However, since most of hanaori textiles were destroyed during the war, they didn’t know much about the technique of making the hanaori. One of the most important people for this movement was a woman named Yonamine Sada, a weaving and dyeing artist, who, while visiting some villages on the west coast of Okinawa, happened to meet a woman who had woven Yomitan hanaori when she was young.

Following this discovery, the group of volunteers began participating in seminars and conferences to spread what they had learned about hanaori. The group evolved into Yuntanza Hanaui Business Cooperative, which helped bring the tradition back to life for the first time in 90 years. A few years later, Yonamine Sada became a Living National Treasure thanks to her energetic efforts to preserve hanaori techniques and skills as well as her purpose of ensuring the continuation of this Japanese textile. Nowadays, Yomitanzan Hanaori has been designated an Intangible Cultural Property of Okinawa Prefecture.

How Yomitanzan Hanaori is Made and the Symbolism of its Patterns

Yomitanzan Hanaori is woven with silk or cotton threads. These threads have been dyed using resources found in Okinawa’s mountains. The traditional color of this type of hanaori is indigo and is decorated with floral and geometric patterns in red, yellow, and white. The threads are then woven on a handloom using different techniques depending on the type of product.

Etsuko-san explains one of the main features of this Japanese textile: “Unlike other types of hanaori, the process of making Yomitanzan Hanaori is not divided between different people, but each product is made from start to finish by a single weaver. Actually, when I see a textile, I can guess who wove it because each of us has our own distinct style.”

The most complicated patterns can take more than 6 months. Once the textile is finished, it is subjected to a thorough and rigorous examination. They inspect the threads centimeter by centimeter. Then the product is weighed and checked for proper dyeing and uniform color. If everything is approved, it can be sold. When I ask Etsuko-san what would happen if a product does not meet the requirements of the check, she answers with a smile. “If there are any mistakes, it can’t be sold, even if we have spent months weaving. In that case, we keep it ourselves or gift it to family or friends. It’s important that the textiles are perfect, and that’s why we take great care and focus as much as possible on our work.”

What Are the Patterns of Good Luck in Hanaori Textiles?

There are three basic patterns that are combined to create different designs. Each one has a special meaning:

Weave Your Own Japanese Textile with the Yomitanzan Hanaori Technique

At Yuntanza Hanaui Business Cooperative, I had the opportunity to experience the traditional weaving process and create my own coaster as a souvenir. As I sat at the handmade wooden handloom, I felt as if I had been transported to an ancient time. Etsuko Shimabukuro taught me how to weave the threads and how to use the pedals, and although it seemed like a simple process, it took me a few minutes (and several mistakes) to get used to the rhythm of the handloom. But I finally managed to finish my coaster, of which I am especially proud.

Yomitanzan Hanaori is a unique Japanese textile. From the time the materials are collected from the mountains until the last centimeter of fabric is woven by a single weaver, this painstaking weaving process requires months of work. Therefore, the quantity of Yomitanzan Hanaori textiles is limited. But at the Voyapon Store, you can purchase Yuntanza Hanaui textiles. One of their special features is that you can use them in many other ways in addition to their traditional use. It’s time to unleash your creativity!