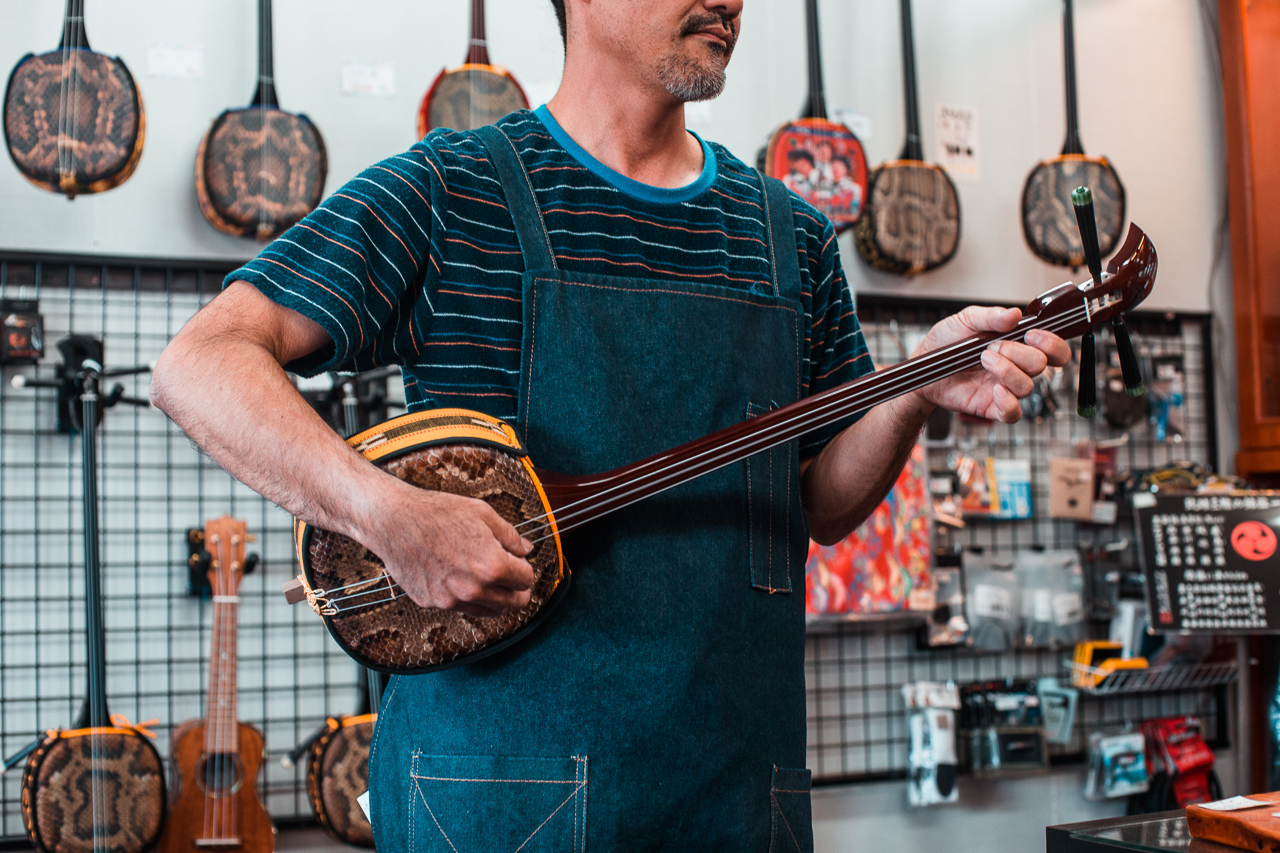 It’s often said that music knows no borders. It’s a universal language understood all over the world and capable of weaving a shared bond between millions of people across different cultures, countries and generations. Sometimes, it remains intact, and at other times, it flows and adapts to changing times.

In Japan, music is a highly appreciated art with a wide array of sounds and instruments. But in Okinawa, a prefecture made up of numerous islands south of Kyushu (Japan’s southern main island), music plays a very important role in the culture and traditions of its inhabitants. During my stay in Yomitan village, I visited Machidaya, a traditional Japanese instruments workshop. In addition to the classic sanshin (三線), Okinawa’s most popular instrument, they also have other unique items, like the sanlele, crafted exclusively by the store that can be purchased on the Voyapon Store. This experience led me to a hands-on discovery of this region’s music, heavily influenced by the ancient Ryukyu Kingdom.

Sanshin and the Sounds of the Okinawan Islands

Machida-san welcomes me at Machidaya, a small sanshin store and workshop located in Yomitan village, close to the turquoise sea off the coast of Okinawa. It’s the best environment to learn about this traditional Japanese instrument.

Sanshin is considered the soul of this prefecture’s music. It’s a kind of Japanese guitar with three strings that produces a warm and cheerful sound. It’s said that it was inspired by a Chinese stringed instrument that was transported to the islands when Okinawa was still the independent Ryukyu Kingdom. Later, sanshin was spread throughout mainland Japan, and it evolved into the shamisen (三味線), a very popular Japanese instrument.

“The main difference between sanshin and shamisen is the type of skin used. The traditional sanshin is covered with snakeskin imported from Southeast Asia. The usage of this skin type for sanshin is unique to Okinawa,” Machida-san explains as he shows me some different sanshin. In recent years, animal protection laws have been changing, and even though the snake species used for sanshin are not endangered, it isn’t easy to export this type of product to other countries. For this reason, other types of synthetic materials are commonly used nowadays.

“For the instrument’s neck, wood from a type of ebony native to Okinawa was once regularly used. This black ebony core is highly sought-after for its strength and its traditional sound quality. Typically, ebony trees no younger than 100 years old are used to make sanshin (the time necessary for the tree to grow a big enough black core to produce one or more instrument necks). The process for treating this wood, since it’s obtained from the tree until it’s considered suitable for sanshin assembly, can take up to ten years.” (…) “The wood needs to dry naturally, which usually means you have to wait another five years. Then it has to be left to rest, so its shape doesn’t change over time. That’s why it’s important to work it little by little.” Machida-san tells me to my astonished face. Sanshin is a simple instrument at first glance, and I couldn’t imagine that its production would require such painstaking work.

Nowadays, sanshin made from this type of wood can cost hundreds of thousands of yen, as this resource is becoming increasingly difficult to find in Okinawa. Therefore, more affordable sanshin is made from wood already treated and imported from other countries. “The greatest difficulty for the future of this traditional art is the lack of resources. It’s necessary to respect and carefully use the resources we have.” (…) “One of my challenges as a craftsman is to reproduce the original sounds of traditional Okinawan music by creating instruments with the materials I have available. But I am also putting my effort into planting new ebony trees to ensure the future craftspeople some good quality and native wood for their instruments.”

Kankara Sanshin and the History of a War

Kankara sanshin (かんから三線) is an instrument born from the history of war and the optimism and resilience of the Okinawans. The Battle of Okinawa, which took place during World War II, began in Yomitan village, with an outcome that resulted in the region’s occupation by the American army for several years. During that time, many of the cultural and traditional elements unique to the Ryukyu Kingdom, and Japan in general, were destroyed.

Despite the fact that the lives of a large part of the population had been devastated, the people of Okinawa tried to recover their joy and vitality through music. It’s then when the prisoners detained by the American army began to make their own sanshin with the materials they had available at the time.

One of the simplest alternatives for making these sanshin was to use metal cans from the U.S. Army to create the body. Telephone wires or parachute cords were used for the strings. The result was a simple sanshin with a unique sound that conveyed hope and courage.

Machida-san explains that his profession as a craftsman is connected to kankara sanshin. “I started this business about 20 years ago in Murasaki Mura, a very touristy place in Yomitan. There, I had a kankara sanshin store where visitors had the opportunity to play this Japanese instrument. My main goal is to raise awareness of Okinawa’s history. Not only among Japanese people but also to people from other countries and cultures.” Machida-san’s words reveal the respect and admiration he has for his roots. “It’s an instrument that appeared in a tough time to brighten up the lives of a population that practically lost everything in the war.” (…) “The kankara sanshin is part of my history, but also of Okinawa’s history. People who had to suffer the war and its consequences tried to stimulate their souls through music, and thus build a better future for the next generations.” Machida-san strokes the strings of the kankara sanshin on his lap, and the sounding chords that resonate deeply in the small workshop transport me to that time of war when Okinawans were not driven by fear and despair but by their desire to move forward with their lives.

Okinawa is a region that has had to adapt to different situations throughout its history. More specifically, in Yomitan, a village that has suffered drastic episodes and incidents. But thanks to the Yomitan people, the village has been able to evolve and improve. That is why part of its music has also been changing to merge with other cultures.

Sanlele is an instrument exclusively produced in Machidaya through the idea of Alberto Shiroma, a Peruvian with Okinawan roots who came to Japan in 1986 to become a singer. Due to the poor living conditions on the island, especially during the war and post-war period, many Okinawans had to emigrate to other places, mainly to South America. Subsequently, many of their descendants have returned to Okinawa to reconnect with their roots. Thanks to Alberto’s songs full of optimism, he is one of the most popular and beloved artists in Okinawa, where he’s lived for years.

“Alberto inquired about the possibility of developing an instrument that would combine the sounds of the ukulele with the sanshin.” Machida-san explains. “For many years, we tried different techniques and finally managed to achieve the result we were hoping for.” The sanlele is born from the combination of the ukulele body and the three strings of the sanshin, reproducing soft and melodic sounds.

Since then, the sanlele has become Machidaya’s emblem and hundreds of artists have been able to enjoy this instrument’s unique sounds. One of the most popular products is the Umi Ashibi Sanlele, made with waterproof wood and an acrylic body. “Okinawan people socialize on the beach. We usually gather there with our families and friends and spend the day having barbecues and picnics.” (…) “That’s why we thought of creating an instrument that’s waterproof so we can enjoy its music by the sea and surrounded by our loved ones.”

As Machida-san told me the sanlele’s story, I realized this instrument is a great portrayal of the Yomitan people. They had to adapt to other cultures but without forgetting their own roots, and have developed an ability to protect themselves from adversity thanks to their own, supporting each other as if they were one big family.

The sanshin was born during the time of the Ryukyu Kingdom, which built up its own unique culture despite being in the middle of the major powers of Japan and China. The kankara sanshin was born out of a strong and cheerful spirit that survived through the painful experience of war. In addition, their ancestors who found a way to live overseas before and after the war, when Okinawa was extremely poor, survived in a foreign land and kept their lives alive. Now, their grandchildren have come back to Okinawa, and together with the Okinawan people, they have created a musical instrument for a new era. That instrument is the Sanlele. Within the Machidaya store is evidence of the Okinawan people’s strong, bright, and resilient lives. Now, through the Voyapon store, it’s possible to enjoy these traditional Japanese instruments from anywhere in the world and let the music of Okinawa warm our hearts.