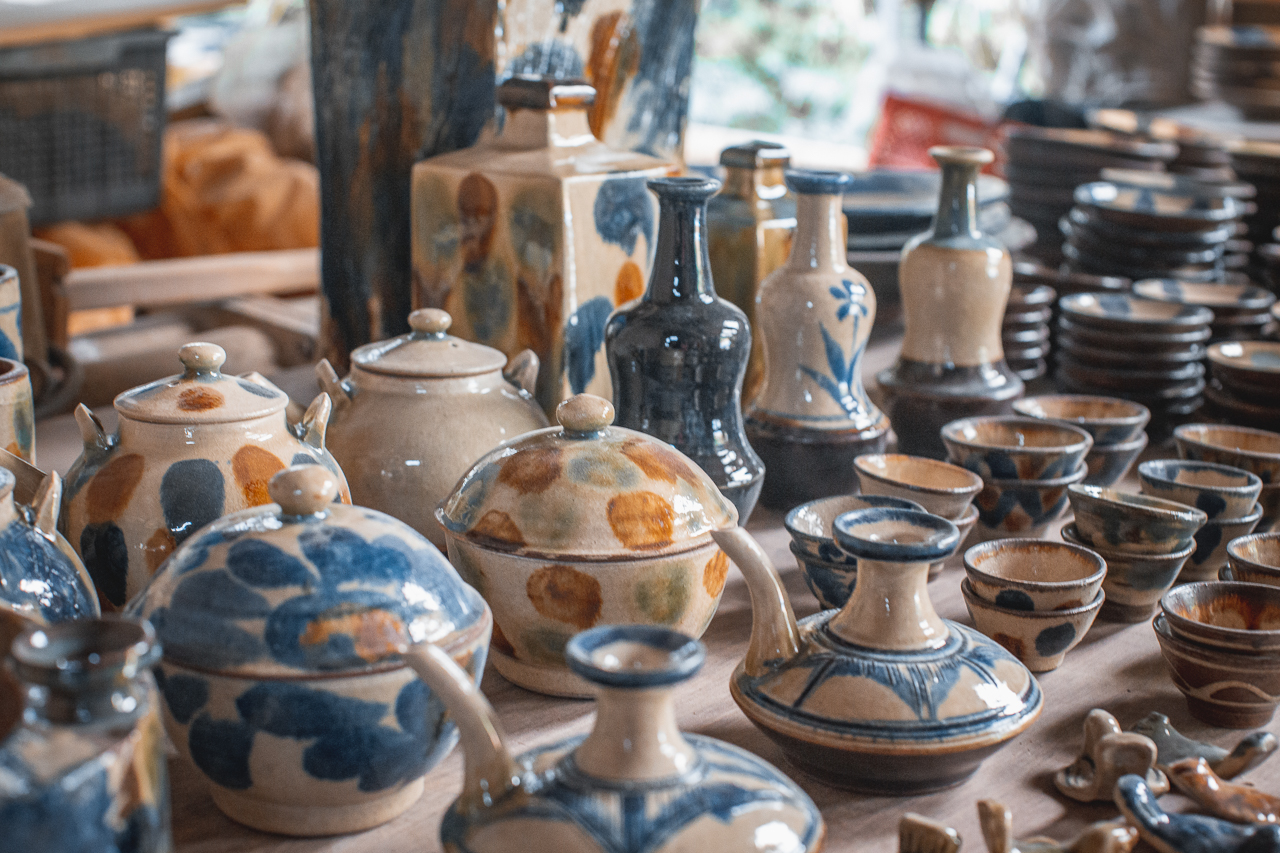 Unlocking the Secrets of the Japanese Ceramic Art with Kyoshi Matsuda

In Okinawan dialect, yachimun (やちむん) means pottery. Its history dates back hundreds of years when the islands were still the Ryukyu Kingdom. Yachimun is part of Okinawa’s identity and highly valued among locals and visitors alike for its rustic design, which consists of a series of small islands off the coast of the southernmost side of Japan.

But behind the simple shapes of these Japanese ceramics lie stories, passion, and a lot of effort. The soil treatment, the search for natural pigments, and even the choice of wood used during the firing are all part of the laborious work process of the artisans who dedicate their lives to creating art from clay. Yomitan village is home to Yachimun no Sato (やちむんの里), Okinawa’s pottery mecca, where I had the honor of meeting Kyoshi Matsuda, a craftsman who, after discovering his passion for Okinawa’s soil, has devoted his life to it. Some of Matsuda’s crafts are available at Voyapon Store, bringing part of Okinawa’s history and traditions available to everyone.

Kyoshi Matsuda and His Encounter with the Okinawa Earth

“I never studied much. To be honest, I didn’t like studying. The only thing I know about is clay”. But Kyoshi Matsuda’s words do not reflect at all the man in front of me. Experience and effort are etched onto his face. His tanned skin speaks volumes about the countless hours he’s spent throughout his life working in the sun and wind. His firm, rough hands and the traces of mud on his nails reveal his love for clay and pottery. And his eyes… His eyes reflect wisdom, history, and passion. “I was born a few years after the Battle of Okinawa, and during my childhood, the island was still controlled by the American military. The only thing people talked about at that time was the war and the army”

(…) “When I was a student I didn’t know what I wanted to do, and although I sought advice from my teachers, I had no passion for anything. So I decided to try my luck in Tokyo and enrolled in a graphic design school. Arriving in Tokyo for the first time, I found a different world. There were people everywhere and many technological advances. Everything was new to me”. When Matsuda-san talks about his youth, I listen without interrupting him with my questions. I don’t want him to stop telling his story.

Ironically, it was in Tokyo that Matsuda first discovered traditional Okinawan pottery. “During the war, much of the Okinawan ceramic was destroyed, and then the craftsmen started making another type of pottery, more similar to the style of Japan’s mainland. But when I held such an object in my hands, something changed inside me.” As he talks to me, I can imagine a young Matsuda holding a ceramic artwork made in Okinawa, his hometown, for the first time. “I couldn’t get used to Tokyo’s lifestyle. After a year, I wanted to abandon my studies and return home. When I left, I said goodbye to my friends, saying that I would never live in Okinawa again. My return would be a serious wound to my pride.” (…) “But as fate would have it, my mother got sick, and it was the perfect excuse to return home.”

Upon his return to Okinawa, Matsuda-san and his twin brother began apprenticing at a pottery craftsman’s workshop. “When I encountered red soil for the first time, I felt my heart pounding harder. Later I read that God created Adam with dust from the soil. My passion for clay led me to believe that I, too, am made of soil.” I am struck by Matsuda’s use of the expression “meeting the soil” rather than “working the soil.” Ikigai is the Japanese concept of the meaning of life and I have no doubt that Kyoshi Matsuda found his ikigai in the soil of Okinawa.

The Art of Traditional Okinawan Ceramics

Kitagama (北窯) is one of the three climbing kilns (noborigama – 登窯 in Japanese) in Yachimun no Sato and was established by Matsuda-san, his brother and two other Japanese ceramics artists after his apprenticeship period. The Kitagama kiln is divided into several rooms and is fired only a few times a year.

As he guides me through Kitagama, Matsuda-san explains the process of making pottery. “After you get the clay from the mountain, you have to let it dry in the sun for six years. Then it is washed and left to dry again for a few months.” Nowadays, most pottery is made from clay produced in other countries’ factories because it is a much faster and cheaper process. But Matsuda-san prefers to keep doing it the traditional way. “Okinawa’s soil is the identity of my pottery. If I used clay from other places, Okinawa’s characteristic features would be lost. That’s why one of my business’s policies is to use only Okinawa’s clay.”

Then he shows me the wood he uses in the kiln for firing the pottery. The best type is Okinawa pine, about 40 years old. But it is increasingly difficult to find this type of resource and they have to use other types of wood. In addition, all the pigments used to decorate the pieces are of natural origin. “In recent years I am noticing that nature is becoming weaker. Clay, wood and pigments are changing and no longer have the strength and characteristics they used to have.” Matsuda-san explains as he shows me a piece of pottery that is more than 100 years old. “My ceramics are born from and transformed by nature. I think it is important that we learn to take care of our natural resources as they are the engine of our planet.“

The Future of the Japanese Ceramics

Kyoshi Matsuda is one of the most known pottery masters in Japan and has been appointed to judge the art of other artisans around the country in major ceramic competitions. Most people who know Matsuda-san refers to him as ‘oyakata.’ Oyakata is a term that is present in various traditional aspects of Japan, such as Sumo. It literally means “the way of the parents” and is used by apprentices to refer to their masters. An oyakata is not only a master of a craft but also serves as a parent figure to their apprentices.

During my visit to Matsuda’s workshop, I realized that people working there are like a big family. The apprentices spend 10 years studying the craft alongside Matsuda-san before going their own ways. During the long working days, some of the members prepare dinner for the others. For Matsuda-san, this time of day is crucial. “Not only does it help to foster teamwork, but it’s also a good way to study the crafts we make. While dining together, we can observe how other people use our dishes, and this helps us understand their strengths and weaknesses.”

As for the future of this traditional art, Matsuda-san is very clear: “I don’t want noborigama to stop. I would like to see a community built around this practice again, as it was in the past.“

During our meeting, Matsuda-san taught me about Okinawan pottery and, through his wise words, I learned about ikigai, the Japanese concept that gives meaning to life. Back in the hotel room, while looking at two rice bowls I bought at the workshop, I remembered a phrase he told me about his work: “My goal is to make my ceramics as natural as possible. Their design is not the most important thing. The important thing is to create a useful object, something that people can rely on.”  On the Voyapon Store, you can find some of the Japanese ceramic plates and other utensils created in Matsuda’s workshop. It’s a perfect opportunity to incorporate a piece of Japanese tradition and culture into your home.