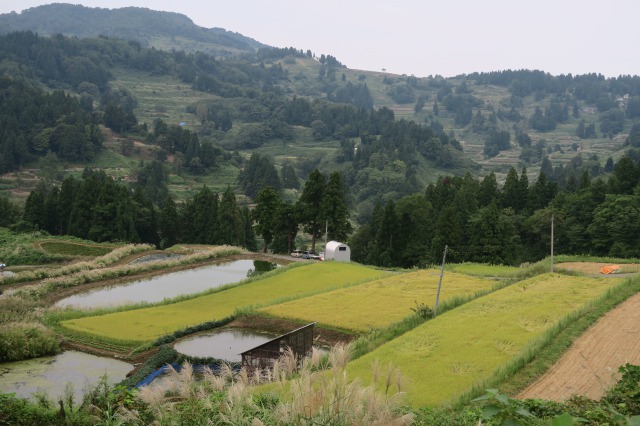 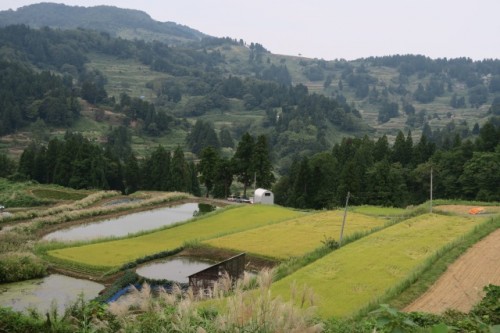 Yamakoshi might only be a small village, but it’s not one that’s short on character, spirit or history. This tiny village, in which everyone pretty much knows everyone else, has had a troubled past, experiencing a terrible earthquake in 2004, which destroyed hundreds of thousands of homes and scattered lives into a million pieces. But despite this, they managed to bounce back, not only to restore what they had lost but also to improve upon their industries and to come closer together as a community. Words cannot describe how hospitable and kind these people are, not to mention the incomprehensible beauty of their landscape and traditions. The journey to golden terraced rice fields, mountainous scenery, misty mornings, beautiful sunsets and the gloriously extravagant Nishikigoi is surprisingly very simple for somewhere so remote. 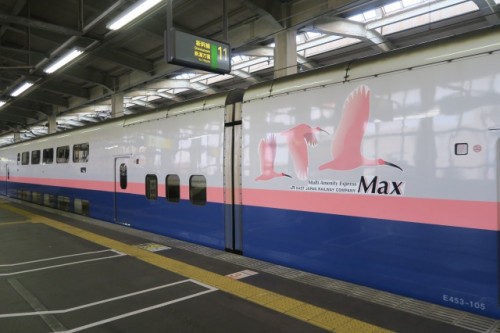 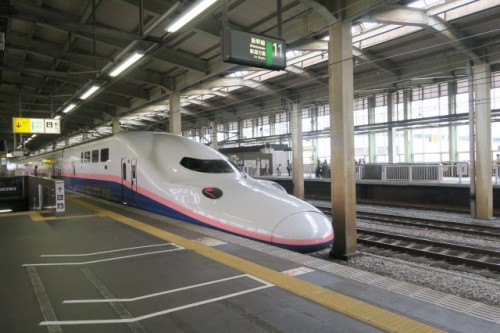 Simply take the Shinkansen ‘Max Toki 303’, which is a superexpress, from Tokyo station to Nagaoka station. It takes just 1 and a half hours, varying by about 10 minutes depending upon the stops. The Shinkansen in itself is a bit of an experience, coming in a variety of sleek shapes, sizes and colours. In fact, they have become so popular, you can even buy Shinkansen souvenirs of the specific type you traveled on. A one way ticket will cost around ¥8,430, which is simply doubled if you want a return ticket. I would advise you to only buy a one way ticket, to avoid the pain of potentially losing your return ticket. There is also the choice of a reserved seat or a non-reserved seat ticket (which is slightly cheaper by around ¥500). Both ways, I bought a non-reserve ticket and was easily able to have a row of three adjacent seats by myself. Just be sure to sit in the non-reserve cars when you board. You can buy your ticket from someone at the Shinkansen ticket counter or from the ticket machines, which are available in English. All announcements are giving both Japanese and English but be warned that this particular Shinkansen had no plug sockets. 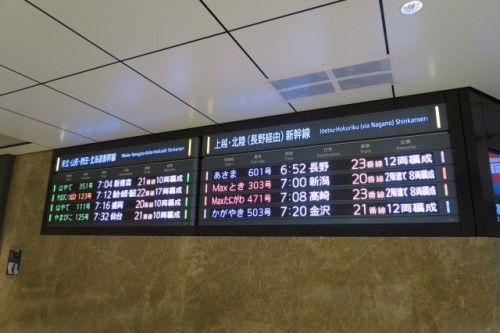 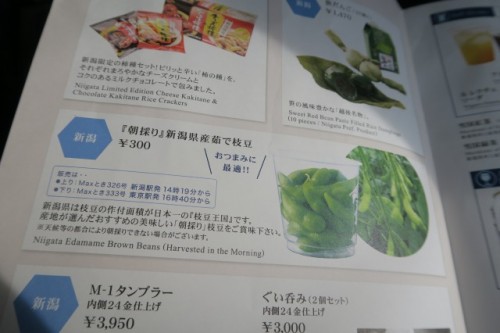 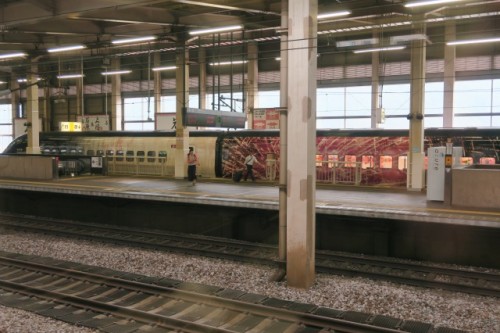 Take the East exit at Nagaoka station, and make your way to bus stop number 7. Be sure to go to the East exit and not the Oite East exit as I did the first time and make sure your surroundings look as in the picture below. 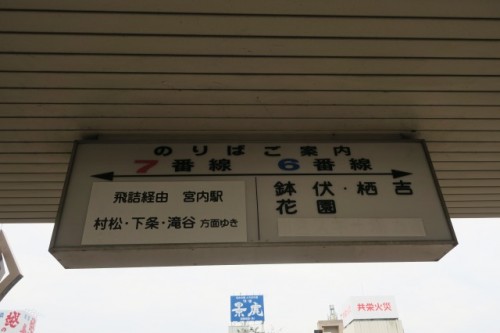 You need to get on the bus which goes to Muramatsu kaiten jo (村松回転場). These buses are
quite infrequent, but there are enough shops, cafes and eateries to keep you busy in the meantime. The bus is an Echigo Kotsu bus and will arrive at stop 7 around ten minutes earlier than the time specified, but it will leave on time. You wont need to take any ticket, simply board the bus and pay ¥330 when you get off at the final stop around 25 minutes later. Be sure to bring some coins for the bus fare, or have an ¥1,000 note which can be changed using the machine at the front of the bus. Please be aware that you cannot change ¥5,000 or ¥10,000 on the bus, so be prepared. 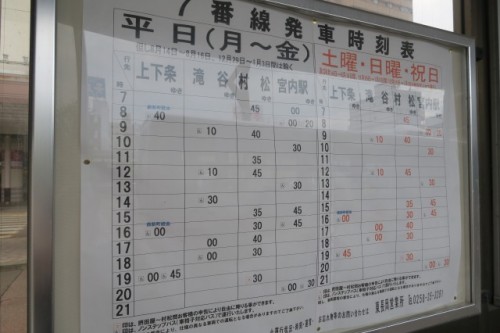 The bus travels through only around three stops before reaching the final destination at Muramatsu kaiten jo. While this bus has no English announcements, getting off at the right stop is simple, as it is the final stop the bus will make but if you are unsure, simply ask the driver as you get off. 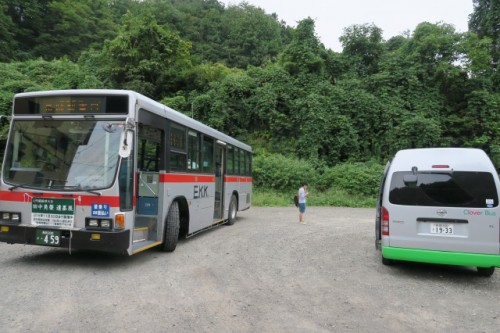 The final stop does not really seem like a stop at all. It is more reminiscent of a large gravel parking lot, yet waiting for you there is the only ‘microbus’ I’ve ever seen. The delightfully named ‘Clover Bus’ will take you to Yamakoshi village, just make sure you tell the driver where you would like to stop as you get on. The stop I went to was called ‘Orataru’ and is where I witnessed an exhibition detailing the damage of the historic earthquake in 2004 and how the strong people of Yamakoshi were able to restore the beauty of their landscape. 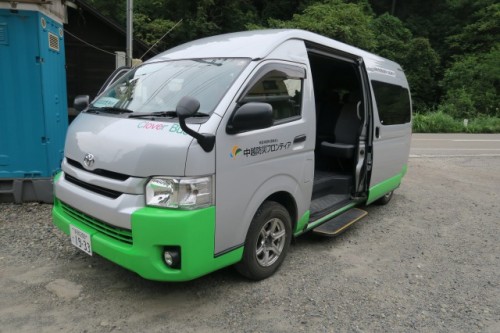 The adorable Clover Bus will wait at the stop for about 5 – 10 minutes before setting off again and will cost you ¥200 or ¥100 for children, no matter where you get off. Simply put the money in the box by the driver as you get off and be sure to bring enough change, as there are no change machines on this bus. The Clover does not operate on public Japanese holidays or Sundays. For more up-to-date information, be sure to check the online timetable at http://c-bosai-frontier.jp/communitybus/140402timetable.pdf 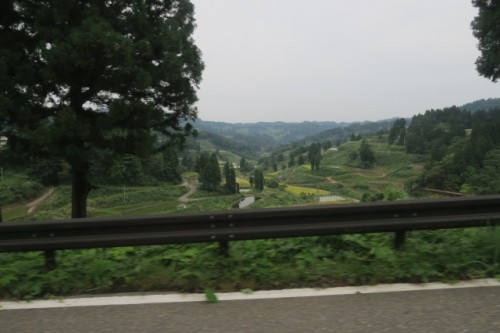 The whole journey depicts the magical transformation from cityscape to landscape, with the final Clover Bus transporting you through the narrow, secluded and mountainous roads of the enchanting, rice field area. Witness the beauty of the landscape through the window of the Clover bus and delight in becoming part of the close-knit neighbourhood in Yamakoshi. 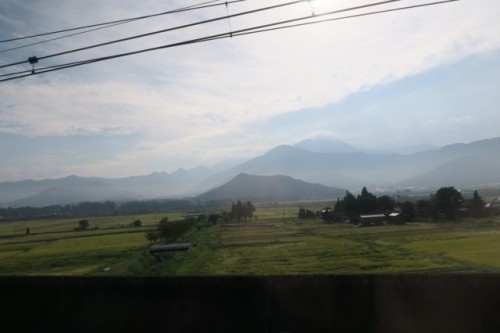