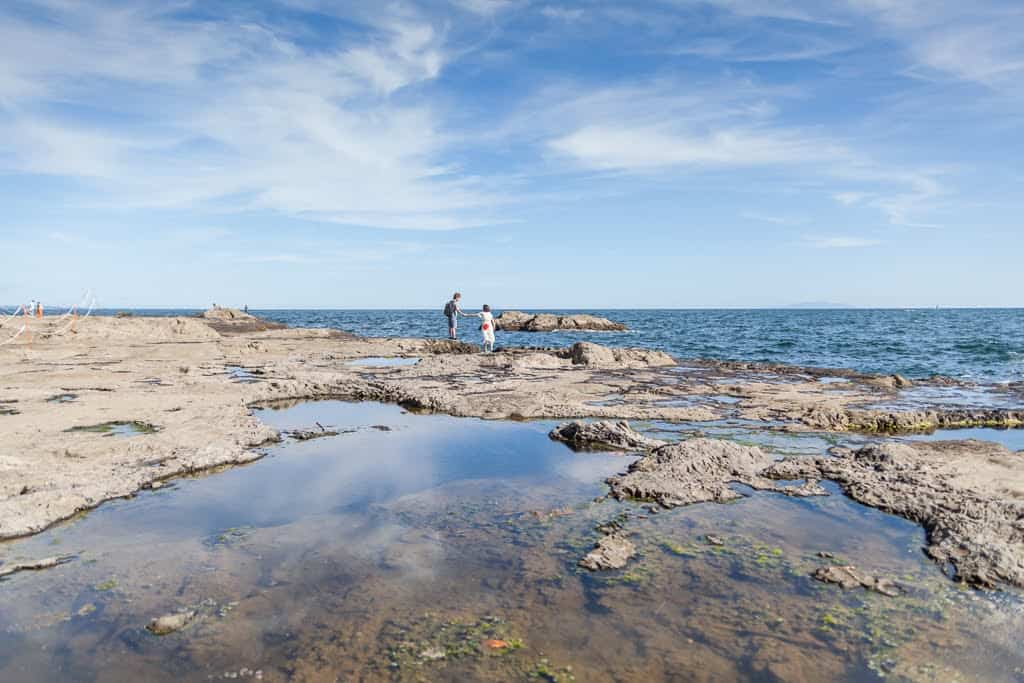 The legendary island of Enoshima (江ノ島) is just a stone’s throw away (or one hour by train) from Tokyo, and is best known for the spiritual pilgrimage along its towering cliffs, all the way down to the Iwaya caves where its original shrines were built in 552.

Fujisawa (藤沢) is the gateway to this mystical island, and not coincidentally the 6th station on the ancient Tokaido road from Edo to Kyoto. Perhaps the best way to approach Enoshima is through its hedonistic portrayal in Edo-period ukiyo-e: lively scenes of fishing, diving, eating, poetry and performing arts, at a time when the steep rocky island could be reached by walking across a long sandbar jutting into Sagami Bay (相模湾).

So I was delighted to prelude my seaside journey with a visit to the Fujisawa Ukiyo-e Museum (藤澤浮世絵館), just a short walk away from Tsujido (辻堂) station. The exhibition space is free to enter and displays many finely detailed woodcut prints by famous ukiyo-e artist Hiroshige and others depicting the region during the flourishing late Edo period, from dramatic ensemble views of Enoshima life with Mt. Fuji on the horizon to parodic portrayals of mermaid-like female abalone divers.

Arriving on the Odakyu railway line, my first pleasure just was alighting at the colorfully decorated Katase-Enoshima station (片瀬江ノ島駅), modeled after the undersea Dragon Palace of Japanese folklore. From there, my pilgrimage began with a walk down Subana-dori, a street lined with Hawaiian-themed cafés, snacks, souvenirs and sports shops.

Embark on a Pilgrimage to Enoshima Shrine

Walking across the footbridge to Enoshima felt like walking right into a modern-day ukiyo-e print with the Sea Candle lighthouse rising above the trees. I passed under the island’s historic bronze torii, then up Benzaiten Nakamise street toward the spiritual center of the island, Enoshima Shrine (江島神社).

On my way up through Monzenmachi (temple town), I spotted the red octopus of Asahi Honten (あさひ本店) on the left. This flagship shop is famous for its takoyaki senbei, large flat rice crackers that include at least one whole octopus, if not shrimp or local shirasu whitebait, freshly pressed on the spot. Irresistibly attracted to the eye-candy, I bit into the shop’s own novelty blue senbei with multicolor-dyed shirasu for a crispy treat.

After passing through the stately white gatehouse of Zuishinmon at the top of the street, the first and largest of the three main shrines I encountered was Hetsumiya (辺津宮), dedicated to the goddess Tagitsuhime. On the roof and the lanterns of the main building was the Enoshima Shrine crest depicting three triangular scales surrounded by oncoming waves.

By then, I had already seen a few images of the goddess Benzaiten playing her signature biwa. The octagonal Hoanden (奉安殿) enshrines two original wooden statues of the deity: Myoon-Benzaiten (妙音弁財天), a nude sculpture characteristic of the Kamakura Period that celebrates artistry, music, and wisdom; and Happi-Benzaiten (八臂弁財天), an ancient statue donated in 1182, whose eight arms hold objects symbolizing good fortune, wealth, and war.

The legendary celestial maiden Benzaiten is also revered for having tamed the five-headed dragon Gozuryu (五頭龍), who up until their divine marriage had terrorized the island with natural disasters.

Walking up the steps leading to the next temple, I was rewarded with a clear view of Enoshima’s landmark Yacht Harbor. It was built especially to host international sailing competitions in 1964, as it hosts them again in 2021. On some weekends, local yacht races are held here too.

I continued on to the vermilion Nakatsumiya (中津宮), which enshrines the goddess Ichikishimahime. Originally built in 853, this more flashy shrine was remodeled and repainted bright red in 1996. The stone lanterns were donated by kabuki actor guilds, as artistically inclined Enoshima was once a popular pilgrimage site for kabuki performers.

Further out on the island, I approached Okutsumiya (奥津宮), the cliffside shrine dedicated to Takirihime, the eldest of the three sister goddesses who watches over a peaceful sea in an area that is particularly prone to typhoons. Under the otherwise unassuming main shrine, I almost forgot to look up—the famous Happonirami no kame (八方睨みの亀), a shy turtle “glaring out in eight directions” from its shell, was originally painted on the ceiling by Sakai Hoitsu in 1803 and vividly restored in 1994.

Could this be the rescued turtle of the Japanese fairy tale Urashima Taro (浦島太郎)? Wishfully, I turned to the lair-like Wadatsuminomiya (龍宮), which enshrines the Dragon God with its literally over-the-top stone dragon figure sprawled above the entrance, for enlightenment.

Savor Fresh Seafood with a View of Mt. Fuji

By then, it was high time for lunch, so I sought out Uomitei (魚見亭), one of several cliffside restaurants facing west toward Mt. Fuji, and the one with the largest terrace for a prime viewing spot. In business for some 140 years, they serve both the local specialty of shirasu-don (しらす丼) and their own classic Enoshima don (turban shell mixed with egg) rice bowls. I chose to savor their exquisitely prepared sashimi, fresh from Sagami Bay.

Stairs led directly from the restaurants down to Chigogafuchi (稚児ヶ淵), named after a young Buddhist page who once dove to his death in the “abyss” of the deep waters. Still, I found this sea-eroded plateau bubbling with marine life to be the most naturally photogenic location on the island—and an ideal spot to watch the sunset over Mt. Fuji at sea level.

I followed the cemented walkway into the caves that shelter the spiritual origin of Enoshima: Iwaya (岩屋). Inside, the cavernous tunnels were smoothly paved and dimly lit, lined with informative panels about Enoshima’s history and culture. These eventually gave way to walls of donated statues, as the path led past dripping stalactites toward the deep sacred site.

Back on the mainland near the top of Subana-dori, I made a visit to Ryuko-ji (龍口寺), a quieter temple that offers a spacious sanctuary away from the area’s main attractions. The grounds include shaded steps and secluded footpaths around a shrouded zelkova-wood five-story pagoda, which emerges at the top of the hill. There, I finally sat down to rest beside the temple’s peacefully commemorative white stupa.

This site was originally constructed in 1337 to enshrine a statue of Nichiren (日蓮), a Buddhist monk who miraculously escaped execution here, ordered by the Kamakura Shogunate on September 12, 1271. He was saved by the divine intervention of a blinding lightning bolt that eclipsed the sky above Enoshima.

Continuing Your Journey from Enoshima

Enoshima has three different train stations, which each offer a different experience of arriving in or departing the area:

Enter the palace-themed Katase-Enoshima (片瀬江ノ島) station to take a commuter train to Fujisawa and then on to Tokyo.

The suspended monorail offers a quietly scenic ride between Shonan-Enoshima (湘南江の島) station and Ofuna (大船), which has JR train connections to Tokyo.

For more spiritual and natural explorations in the area, take the coastal Enoshima Dentetsu “Enoden” (江ノ電) electric railway line from Enoshima station to the east end of the line in Kamakura (鎌倉) for another day of sea views, temple visits, and hiking around the Big Buddha.

Taking a day trip to Enoshima is a fun way to travel back in time to Japan’s lively Edo period, where you can enter the fantasy world of ukiyo-e and make your own pilgrimage to the spiritual depths of this scenic island.