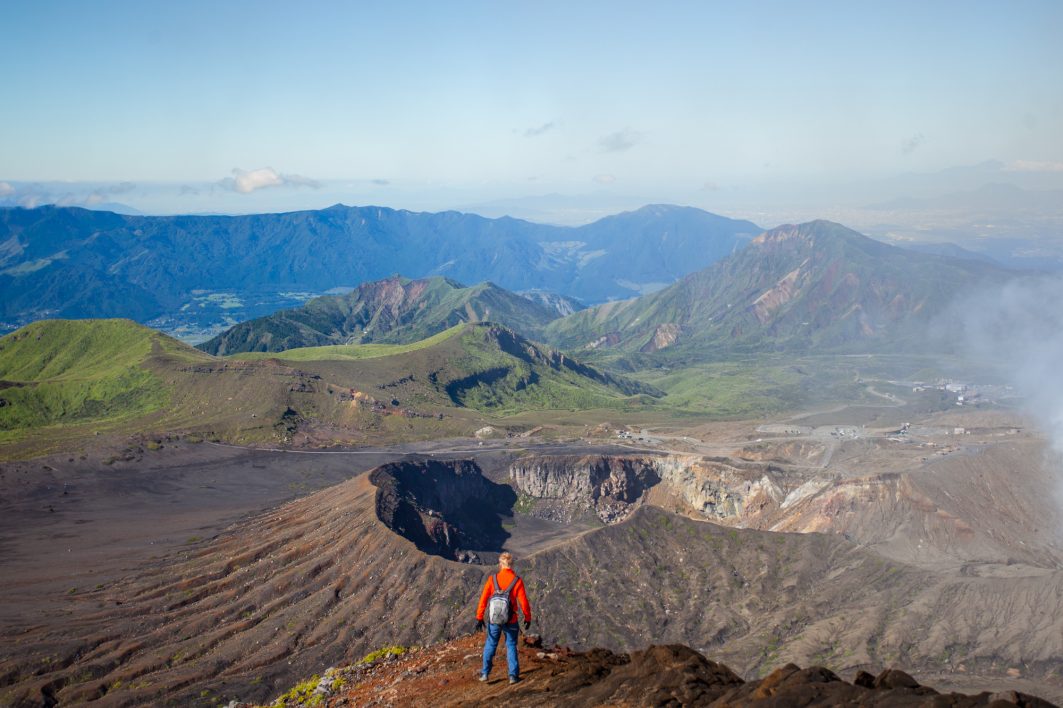 The mighty Mount Aso (阿蘇山) is the largest active volcano in Japan. As is the case with many of the volcanoes located on Kyushu Island, which is often referred to as the land of fire due to the high number of volcanoes it is home to, Mount Aso tends to erupt quite often.

The latest explosive eruption of Mount Aso occurred in October 2021, only one month after my first hiking trip to the area, when the eruption alert level (regularly updated by the authorities) was at its lowest. This meant that I could get close to the crater, which is impressively large, with a circumference of around 120km. While I was lucky in terms of the timing, the entry zones along the hiking trail and the viewing platforms regularly change depending on the activity level at the caldera. As a result, it is highly recommended that you check the latest alert level before planning your trip. As is often the case in Japan, authorities do their best to find a balance between allowing humans to enjoy this unique landscape and ensuring everyone’s safety.

This is the summary of my day hiking in Mount Aso, exploring its numerous peaks and trails offering a variety of landscape scenery. I visited the region in September when the green hills perfectly contrasted with the caldera’s brown and wild landscape. However, the region is worth a visit every season, including in winter when snow-covered peaks guard the fuming caldera.

Where is Mount Aso?

Mount Aso is located in Kumamoto Prefecture of Kyushu Island. Long served as a prime hiking destination, the hiking area is easily accessible from the nearby Aso-Kumamoto Airport.

The impressive range of mountains that make up Mount Aso is located in the southern part of Aso-Kuju National Park, which is large enough to expand its borders into two prefectures, Kumamoto and Oita.

What Are the Most Popular Hiking Trails in Mount Aso?

There are a number of trailheads leading to Mount Aso, but only one of the trailheads is easily accessible with public transportation.

The most popular trail starts at Asosancho Parking Lot (阿蘇山頂駐車場), which is accessible by direct bus from Aso town or with your own vehicle (unless restrictions are in place). But the easy accessibility comes with caveats. The bus schedule, with only four hours between the first and last bus, does not allow enough time to cover multiple peaks in one day and is designed with quick day visitors in mind. If you do not have your own mode of transportation and want to enjoy a long day hike exploring multiple peaks in the area, starting the hike at Sensuikyo Car Park (仙酔峡駐車場) is a better option, with an easy combination of a short train ride followed by a relatively inexpensive and short taxi ride.

Starting the hike at Sensuikyo has some other additional advantages. While the main trailhead at the Asosancho Parking Lot ensures a quicker view of the impressive caldera, the initial encounter with the Aso Mountain range can feel a bit underwhelming for independent travelers or hikers. The tour buses and individual cars parked in the parking lot and the viewing platform make it feel more like a landmark viewing trip to check off your must-see lists rather than the beginning of an adventurous hike.

Alternatively, starting the hike at Sensuikyo and arriving at the main Asosancho trailhead at the end allow the hikers to immerse themselves in the wild volcanic scenery before rejoining the crowds at Kusasenri, which is the first bus stop when you approach the mountain from Aso town. It is a beautiful plateau where the relatively short hike to Eboshidake (30-40min) starts but the vast scenery, the horseback riding opportunities through the picture perfect greenery, and the volcano museum makes the place worthy of a visit on its own. The worldly amenities at Kusasenri (such as cold beer and pizza) also make a happy addition to the day’s end of hiking.

Sensuikyo trailhead is no longer served by a bus from Aso town. A combination of a short train and taxi ride (or an appx. 1.5-hours long walk from the train station) is required to reach the trailhead. A fellow hiker that I met on the previous day at Aso train station and I decided to team up for the hike and pre-arranged a taxi to pick us up from Miyaji Station (6 min train ride from Aso Station) for the 10 min drive to the trailhead (appx. 2,000 yen). There is a tourism office inside the Aso Station, and they are more than happy to assist the visitors with these arrangements.

The first part of the hike requires a steep climb, the kind that makes you question what made you skip your morning coffee session to hit the mountains. The initial hour of the hike follows the route of the Sensuikyo Ropeway, which is no longer in use, with the apocalyptic view of the long-abandoned ropeway station. But give it an hour, and the scenery radically changes and substantially “warms up” when you reach a minor peak overlooking the large caldera fuming in all its glory and offering uninterrupted views. In the absence of other hikers, this close and intimate encounter with the caldera was so unexpected that I felt we had already reached the high point and the highlight of our hike within the first hour. Luckily, the varying landscape of Mount Aso had a lot more in store for us.

Once you reach this “unofficial” viewpoint, the trail radically changes and becomes more fun, requiring some minor scrambling. The slippery route climbs up to Takadake, the highest peak in the region. While most hikers often directly head for Nakadake, the second highest peak in Mount Aso mountain range, Takadake offers some of the best panoramic views of the entire mountain range.

After a long break at Takadake, our next stop was Nakadake (1.506-m), easily the most popular lunch venue in the Aso Mountain Range. After the initial one-hour push from the trailhead, the trail became relatively easy, allowing one to enjoy the scenery comfortably. Due to its central location and easy accessibility, Mount Aso is a popular hike for visitors passing through Kumamoto’s highlights and residents alike. As the day proceeded, we ran into numerous families heading to Kumamoto’s favorite lunch spot with picnics in their hands — Nakadake!

Despite the volcanic activity, the peaks surrounding the caldera are surprisingly green. As one moves further along the trail, the volcanic terrain gives way to almost Ireland-like greenery and sharp cliffs resembling the Irish coast (an analogy approved by my hiking buddy from Ireland). After a leisurely hike of five hours, we soon reached the last segment of the trek that involved a flat walking platform on an otherworldly terrain — Sunasenri. The plantless area is entirely covered by volcanic sand, making me feel once again in awe of the different landscapes Mount Aso hike allows visitors to experience in a single day.

Thanks to the efficient transportation network of Japan and particularly of Kyushu, both Aso town and the main trailhead for the Mount Aso hike can be accessed with a combination of train and bus travel.

If you are not already in Kyushu and traveling from other islands of Japan, the quickest way to get to Mount Aso is to fly to Kumamoto Airport, which is well served by both Japan’s two main airlines, JAL and ANA, and the low-cost airlines. The airport is directly connected to Aso town by the Kumamoto airport limousine. However, consider yourself lucky if you are on time to catch one of the relatively rare direct buses. Alternatively, there is a free shuttle van that commutes between Aso-Kumamoto Airport and Ozu Station, from where you can catch the local train to Aso train station (50 minutes, 570 yen).

How to Access the Trailheads for Mount Aso Hike

Access to the Asosancho trailhead is easy, thanks to the direct bus between Aso Station and the trailhead. But as noted above, there are only four hours between the first and last bus, which makes it challenging to rely on a bus for a full day hike in the area.

The alternative option is to start the hike at Sensuikyo trailhead and finish at Asosancho. You can take the early train to Miyaji Station from Mount Aso (6-mn, 210 yen) and then cover the distance to the trailhead with a pre-arranged taxi that costs around 2,000 yen.

Where to Stay in Aso

Most trips to the area often start for me with a stay in Aso town, which is merely one hour away from Kumamoto Airport. The modestly sized town makes a perfect base to explore the Aso mountain range.

The town itself is also a pleasant place to experience rural Japan. It is home to an excellent hostel, an atmospheric onsen with a rotenburo (outdoor hot spring), and traditional and modern eateries.

Aso Base Backpackers Hostel is my go-to choice whenever I visit the area. It offers both dorm style and single rooms with a large common area on the first floor. There is a convenience store merely steps away from the hostel. There’s also a highly-reviewed and reasonably priced ramen shop, and the train station and the excellent Aso Bochu Onsen are also within walking distance.

Mount Aso is one of the most rewarding hiking regions in Japan. The unique terrain, the easy accessibility, and the thrill of approaching an active volcano is a rare combination that often warrants multiple visits to the region to explore its numerous trails.