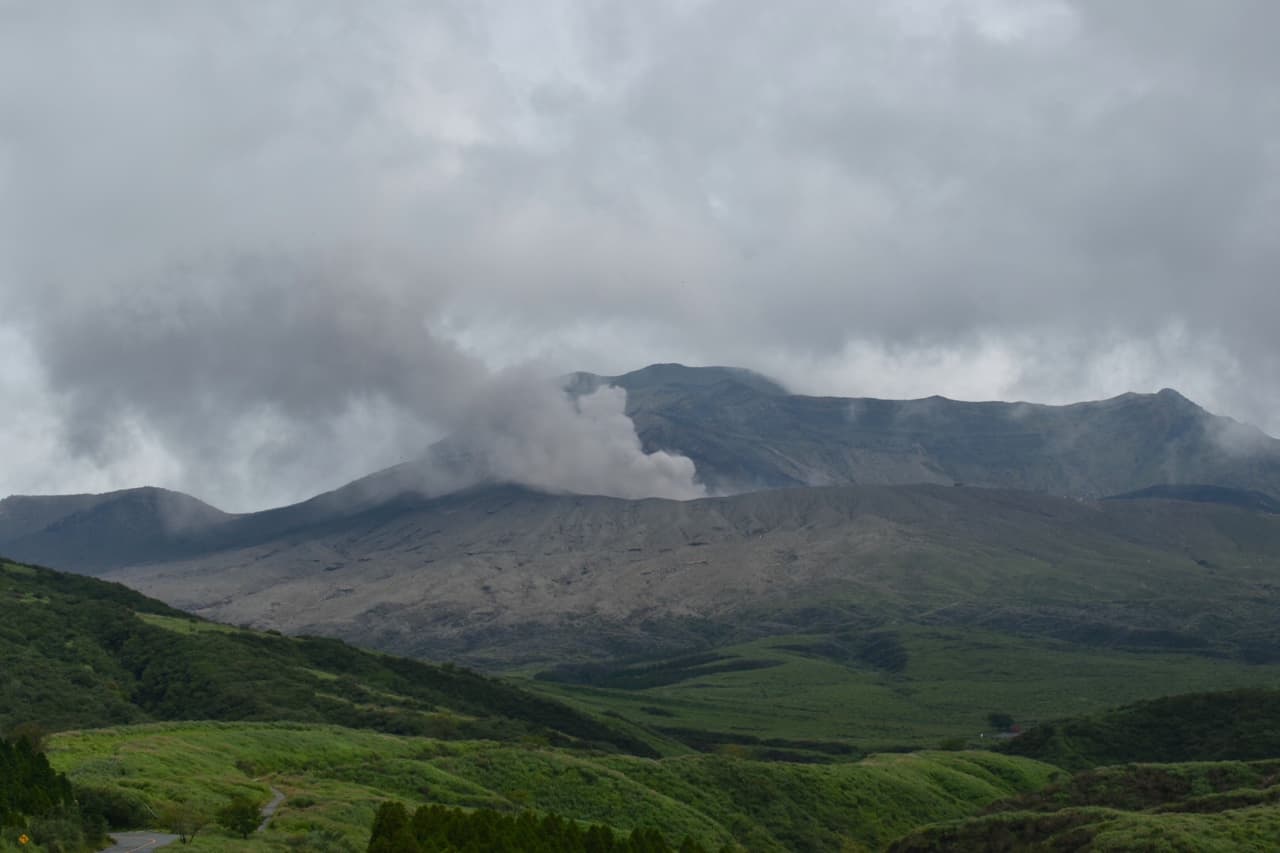 Mount Aso: Stunning Landscapes and Geotourism on an Active Volcano

The air smelled like sulphur as plumes of steam bellowed from the earth. The Aso caldera, formed from several massive eruptions thousands of years ago, is now home to around 70,000 people and tourists across Japan marvel at its splendour.

It was my first time visiting Mount Aso, in the central area of Japan’s southern island of Kyushu, and I had the freedom of a rental car during my trip. I also had the opportunity to spend three days exploring the area with my mother, who was visiting Japan for the first time and was keen to experience its natural beauty. It was, unfortunately, rainy weather when we visited, but the good folks of Northern Kumamoto Administrative Headquarters provided us with some photos of sunny days at Aso to use in this article.

As the short flight from Tokyo descended towards Kumamoto-Aso Airport, a colourful patchwork of fields appeared beneath the clouds.

The UNESCO Aso Geopark is one of 9 such parks in Japan and aims to raise awareness of the importance of volcanic areas whilst promoting sustainable tourism. Suggested itineraries have been designed according to themes so visitors can choose what they are most interested in.

You can go trekking, paragliding, camping or simply admire the magnificent views. My mother and I wanted to see the area’s scenic beauty and experience an active volcano in all its glory.

The Grandeur of Mt Nakadake

Mount Aso refers to five peaks; Mt. Neko, Mt. Taka, Mt. Nakadake, Mt. Eboshi and Mt. Kishima. The highest point is Mt Taka, standing at 1592 meters above sea level. The most active peak in the centre of Mt Nakadake is an emerald basin of hot water formed from water deposits over many years. A ropeway can take you to the crater’s rim to see the basin of hot water; it is in service based on the level of volcanic activity at the site for safety reasons.

Even though visitors are kept at a safe distance, there are several ways to experience the mountain and vantage points offer places to stop for some incredible photo opportunities. We stopped in a lay-by to take in the view and smelled the sulphurous air for the first time, which was very distinct.

The low-lying clouds gave the area a mysterious atmosphere, adding to its charm. Looking upwards, thick crevices had opened up in the mountainside to reveal dark, volcanic soil which looked striking against the bright green summer grass.

The Kusasenri Observatory sits at the end of route 111, a winding road up the mountain. There are two viewing platforms from which you can see the smoking Mt Naka. The Aso Volcano Museum is a short walk from the observatory, costing 410 yen to park.

The museum is the best location to learn about the volcano and have a scenic lunch. It’s free to enter the first floor and you can see a photo exhibition about the area’s nature and pick up useful leaflets to plan your trip.

Grasslands Cafe has several western-style dishes on its English menu. It’s the perfect place to enjoy delicious food while gazing out over the prairie toward the volcano. The gift shop sells an extensive range of local products, such as Aso Milk. What better way to enjoy creamy local milk than in the fertile countryside where it was produced?

After lunch, we took a short walk across the prairie where horses roamed freely and got a better view of the natural lake and the volcano in the distance.

On the way to the observatory, you pass Komezuka, a perfect volcanic cone sitting neatly amongst the caldera.

The 80-meter-high slopes are covered in lush green grass, which changes colour in different seasons, but the highlight is the perfect summit dip, which looks like a ball once rested in its socket. Komezuka is genuinely mesmerising and seems out of place in the caldera. The cone can be seen from different angles; the road to Kusasenri Observatory affords stunning views of the summit, while the road to Minamiaso allows you to get closer to the slopes. I recommend the view on the way to the observatory as it’s breathtaking.

Daikanbo Peak: The Ultimate View of the Caldera

Daikanbo, a lookout point at 936 meters high, offers the best view of the north half of the caldera. It can be reached by the Milk Road, which snakes its way across the mountainous terrain and passes small farms.

It’s a short walk from Daikanbo cafe and gift shop to the vantage point and the paved path allows you to see different views of the caldera. It’s the ideal picnic area on a sunny day as benches line the paths.

The gift shop sells souvenirs, and you can also try different flavours of ice cream from the Aso area. We tried the vanilla flavour, which was creamy and delicious, but there are many more to choose from. A large stone plaque marks the most famous view from which you can see the five peaks of Aso on a clear day.

A trip to the Aso Caldera will not disappoint. Exploring the terrain by rental car gives you the freedom to stop off and take in the scenery. It will ignite your senses and make you feel the true power of nature.

In 2019, Kumamoto takes to the world stage when it hosts the 24th Women’s World Handball Championships from November 30th to December 15th, where 24 countries will play 96 matches at five venues across the prefecture. It is also one of the host venues of the Rugby World Cup, and two international games will be played at EGAO Kenko Stadium. Fukuoka, Kyushu’s main city, is just 40 minutes from Kumamoto by bullet train and about an hour and a half by car on the Kyushu Expressway. Both Fukuoka and Kumamoto have airports with flights across Japan as well as some international destinations. We used a rental car to tour the area, allowing you to go where you please and explore in more detail.  It takes less than an hour by car from EGAO Kenko Stadium in Kumamoto to the foothills of Mount Aso, so it’s perfect for a day trip or even a longer stay in a local guesthouse.