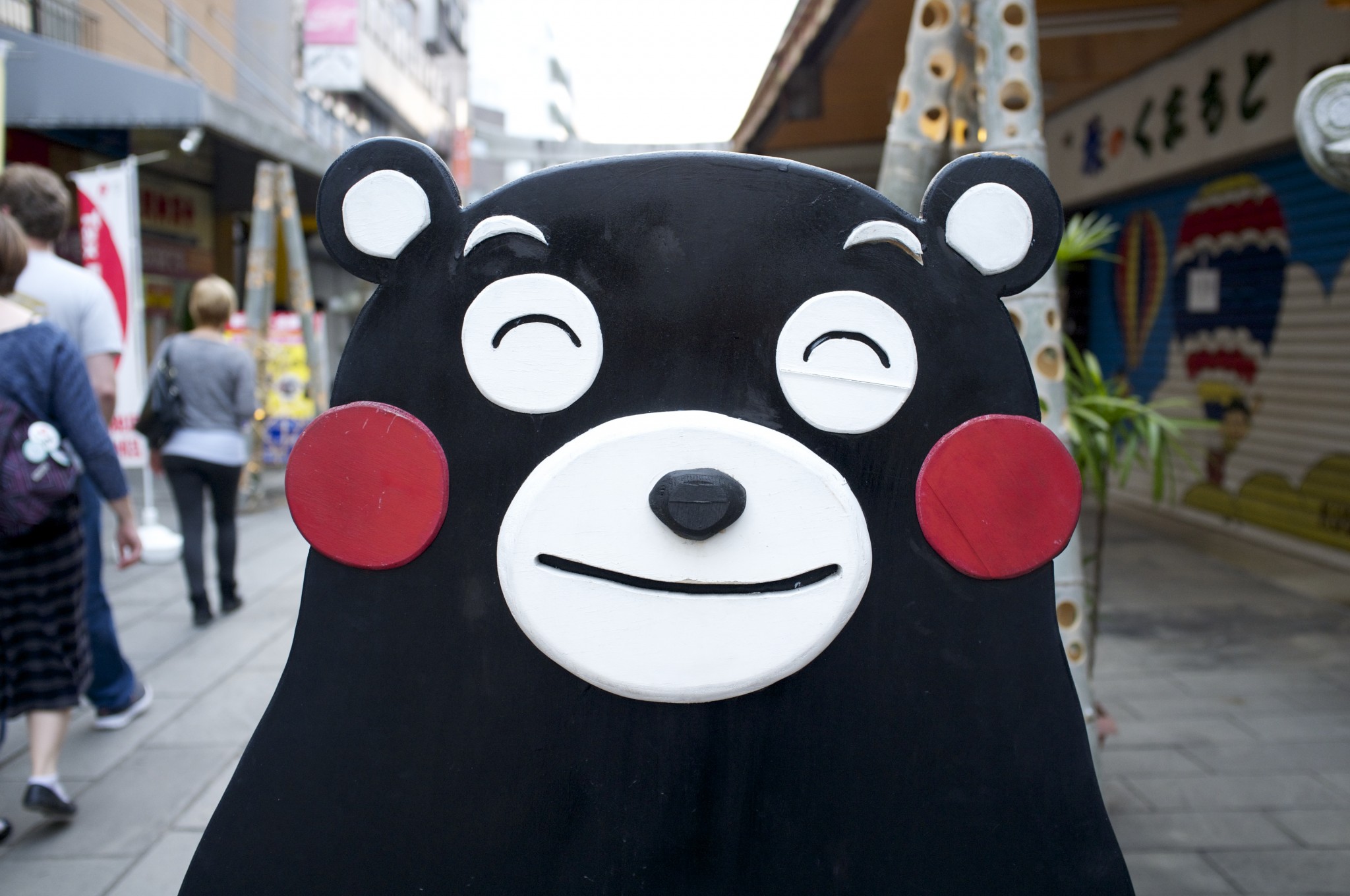 Please Bear With Us: Kumamon, The Mascot Character of Kumamoto

Kumamoto prefecture’s mascot character of Kumamon has become a prolific figure within Western internet culture, ever since a photo of him in front of a burning pyre at a 2011 Firefighters’ New Year Event went viral. The reason Kumamon’s appeal has been so profound among western audiences is likely the same as what makes so much of Japanese “kawaii” culture so intriguing. He markets the initial appearance of being incredibly cute, while simultaneously boasting a certain je-ne-sais-quoi that is profoundly menacing. Regardless of whether you find him cute or creepy, it is undeniable that Kumamon has established an international reputation for himself. Unfortunately enough, relatively few people are familiar with the story behind this bear, or the prefecture that he’s associated with… 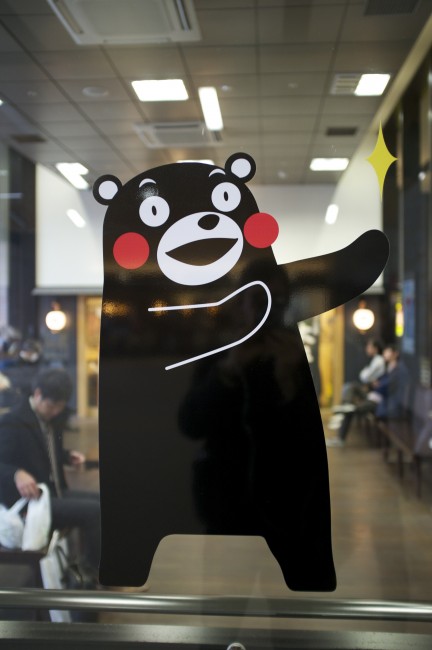 Why was Kumamon Created?

Kumamon, for those who are unaware, is the official mascot of Kumamoto prefecture in Japan, unveiled in 2010 with the opening of Kyushu Shinkansen ( the bullet train in Japan )  in order to promote tourism within the region.  His character is of course inspired by Kumamoto (the prefecture’s name literally translates into “bear origin”), whereas Kumamon is derived from “kuma” (meaning “bear”) and “mon” (meaning “person” or “thing” in Kumamoto’s local dialect). Kumamon exploded into even greater popularity in 2011, when he was awarded the Yuru-kyara Grand Prix, a nationwide contest for the most popular mascot in Japan. 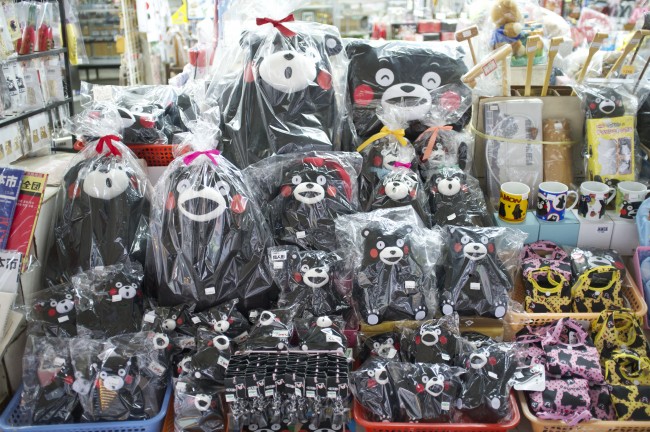 The character’s usage is royalty-free, as Kumamoto’s government doesn’t charge businesses within the prefecture for using of the character, meaning that the variety of Kumamon products that are available locally is virtually boundless. Kumamon’s wide-eyed grin can be seen marking everything from clothes, to groceries, to toilet paper. There is no shortage of mascot merchandise in Japan, though there are certain hotspots to be aware of for those in search of particular Kumamon products. 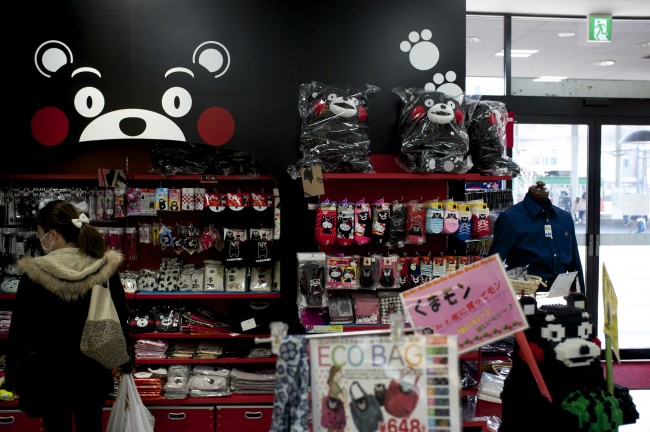 Where Can We See Kumamon in Kumamoto?

The main ports of rail entry – Kumamoto Station – was once renamed for a limited time “Kumamon Station.” It features a large statue greeting guests with Kumamon’s glistening, pear-shaped likeness in the central Shinkansen lobby. Beyond the statue is the Ekimachi 1-Chome shopping area, which hosts a plethora of shops selling a variety of Kumamon’s clothing, souvenirs, and snack foods. While browsing the station, you may want to be on the lookout for the Kumamon wall murals, in which he can be seen striking a variety of poses. 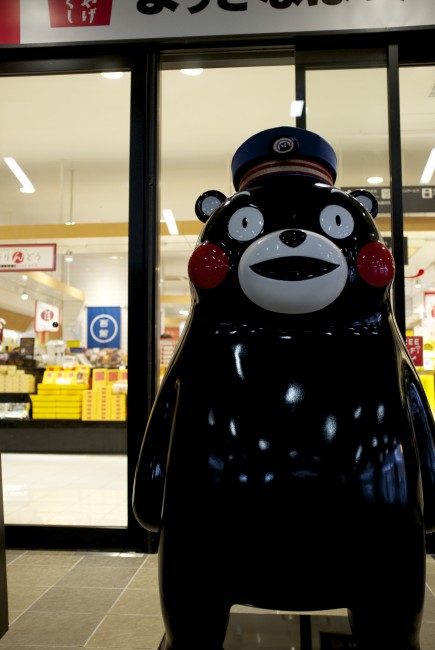 The mascot creeps everywhere, as you approach downtown and Kumamoto castle. From there, there is a view not to be missed: Kumamon’s face adorns the side of Shinkin Bank Building, gazing toward the castle’s observation deck. This view can be seen (along with a spectacular panorama of the city) by those who climb the castle, although he appears even more mammoth from the streetcar stop below. 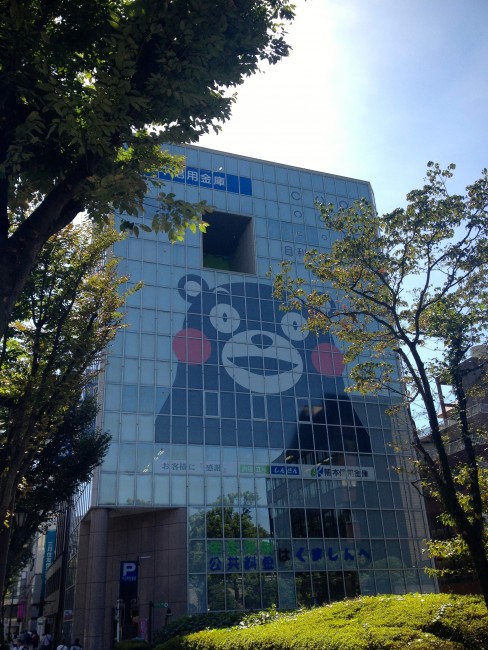 Those looking for truly unique Kumamon products would be best suited to visit downtown Kumamoto. Scattered throughout the entirety of Kamitori and Shimotori Shopping arcades are several souvenir stores which proudly boast Kumamon merchandise. Those who have an interest in sewing and crafts may consider visiting Makino, a fabric store just past the MacDonalds. There they sell both fabric in various Kumamon motifs, as well as some of their own handiwork made of said fabric.

Just past Shimotori and on the first floor of Tsuruya Department Store’s East building is the official “Kumamon Square.” Here you can get your hands on all sorts of Kumamon original goods and snacks, while watching some of Kumamon’s promotional videos. This is the most “official” of all the Kumamon shops out there; selling exclusive and special-edition Kumamon items produced by the prefecture itself. Across the street, the Contemporary Art Museum of Kumamoto is another good hub for unique Kumamon mechandise. The museum features several post cards and calendars that feature majestic spreads of Kumamon’s world travels. What a cultured fellow. 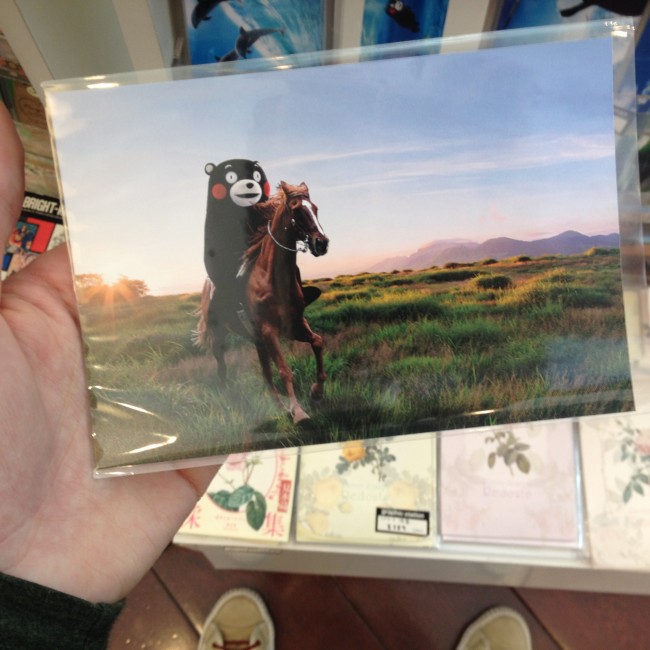 In order to represent Kumamoto’s reputation for being an active and adventurous prefecture, you will often find Kumamon out and about throughout the area. Those wishing to meet the beast himself can consult his PR schedule  at http://kumamon-official.jp/(in Japanese only). Devout Kumamon fans looking to make the pilgrimage to this bear’s origin will be in luck, as there is, of course, no shortage of Kumamon in Kumamoto City. This character will be keeping his wide eyes on you while you’re in his prefecture – whether you like it or not. 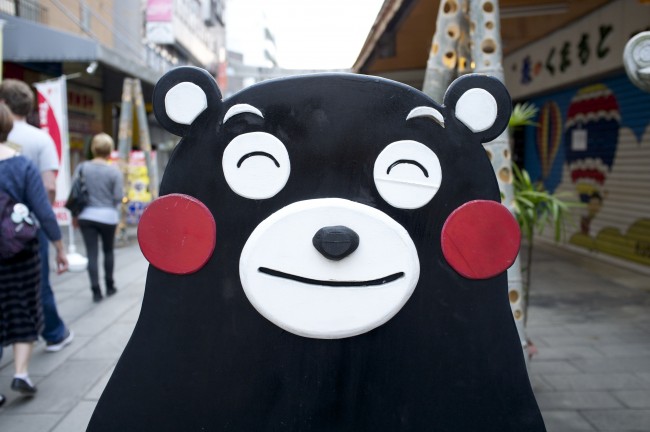