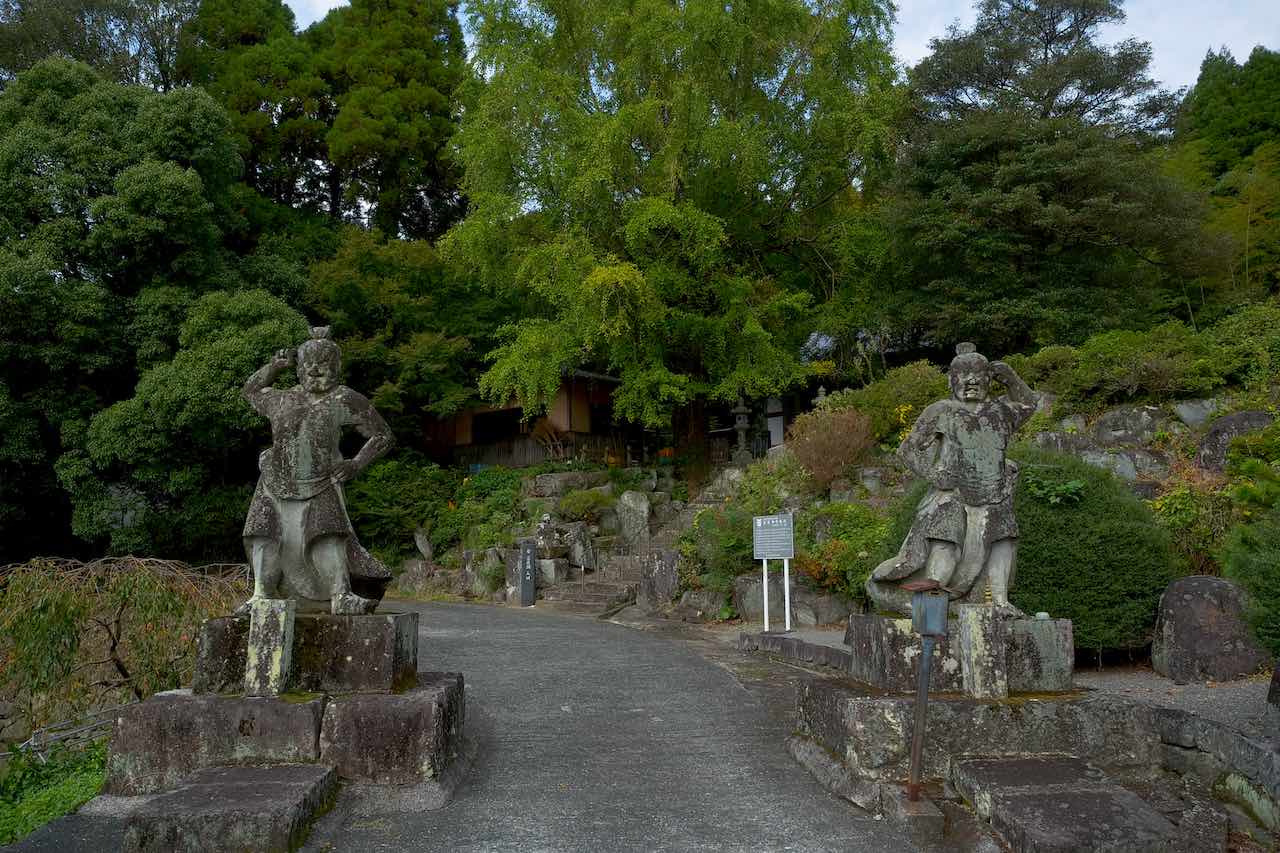 By Stefania Da PontApril 8, 2022No Comments

When talking about Kumamoto (熊本), the first image that comes to mind is probably Kumamon, the city’s cuddly black bear mascot, if not the symbolic Kumamoto Castle, which sadly was severely damaged by the 2016 earthquake. In the past, this city in Kyushu also hosted a great historical figure: Miyamoto Musashi, who is considered the greatest swordsman in Japan. This famous samurai is known to have spent time not only in the castle but also at Unganzenji temple, and especially inside its Reigando cave.

Unganzenji is just over 10 kilometers from the center of Kumamoto, but the route that leads you there will soon make you feel like the city is far behind. To reach the temple, you will climb steadily toward Mount Kinbo along roads lined by forests, fields, and citrus orchards.

Upon arrival, you will be welcomed by Miyamoto Musashi himself, in the form of a bizarre statue watching over the parking lot, sitting next to one of Japan’s ubiquitous vending machines.

The temple is surrounded by the calmness of the Japanese countryside. At the top of a stone staircase, two nio statues, the frowning guardians, mark the entrance, which is hidden among the greenery.

The temple’s main building is almost 700 years old. It is believed to have been built in 1351 by the Chinese-born Zen monk Toryo Eiyo. Unganzenji (雲巌禅寺) is also known as Iwato Kannon (岩戸観音), in honor of the statue of the bodhisattva (the same Kannon enshrined in the Sanjusangendo in Kyoto) housed inside the cave. Legend has it that the statue was mysteriously stranded in the cave even before the founding of the temple, ferried ashore by a wooden plank after the ship carrying it sank.

The temple has remained in the same place since its constitution. Although it has suffered damage from weathering, its location and history are unchanged. Since ancient times, the surrounding area has been considered sacred because of its arcane rock formations and used for ascetic practices. It is now the 14th stop on Kyushu’s 33 Kannon pilgrimage (九州西国三十三箇所 Kyushu Saigoku Sanjusan Kasho) and is part of Japan’s Important Cultural Properties.

The temple building, however, is just the starting point of the visit. From there begins the path that leads to the cave, through a forest populated by mysterious and disturbing stone creatures: the 500 arhats.

Concealed among moss and rocks, hundreds of stone statues pop up on either side of the path leading to the cave. They are arhats (rakan in Japanese), disciples of Buddha who have reached nirvana. A devoted merchant, Fuchitaya Gihei, spent 24 years carving them, from 1779 to 1802. Many of them show signs of age and some are missing their heads, due to earthquakes or to the destruction of Buddhist statues during the Meiji Restoration.

Many of them still display expressive faces, each one different from the other, illuminated by the light filtering through the trees. In the morning silence of the path, deserted at that moment, I could feel their gazes on me… Despite their immobility, they are living presences emanating energy. And they escort me to Reigando cave.

Climbing a steep stone staircase leads to Reigando (霊巌洞). This modern mode of access is a relatively recent element of comfort; in ancient times, you had to climb the rocks or use a rope ladder.

The cave opens up like a mouth among the rocks, wide but not too high, nor too deep. Looking up, on the ceiling you can see three Chinese characters engraved in the stone, representing the name of the place: 霊 (rei), 巌 (gan), 洞 (do). They have stayed the same since the founding of the temple.

My travel buddy and I have the privilege of being the only visitors at that moment. This allows us to feel the sacredness of the cave, which has been a place for asceticism and meditation since ancient times.

It is not difficult to imagine the most famous guest of this cave, Miyamoto Musashi, sitting there, immersed in meditation.

Who was Miyamoto Musashi?

Born in 1584, Miyamoto Musashi (宮本武蔵) was a samurai in the early Edo period, a military strategist and an artist at his daimyo’s service, considered the best swordsman in the history of Japan. From 13 to 29 years old he fought in 60 duels, always remaining undefeated. Later in his life, he dedicated many years to perfecting his martial arts techniques and founded his own sword school, the Niten Ichiryu.

As Miyamoto Musashi approached the age of 60, he retired and devoted himself to the study of literature and other arts and disciplines, such as painting and calligraphy. In 1640, invited by the feudal lord Hosokawa Tadatoshi, he went to Kumamoto, where he spent part of the last years of his life. When he retired to Reigando, he dedicated himself to meditation and writing, in particular of his famous work The Book of Five Rings.

Shortly after concluding the book, he died of disease around the age of 62 (an advanced age, considering the average life expectancy back then). There are several legends about him, and his figure inspired several works and characters in contemporary culture, from movies to manga.

The Book of Five Rings (五輪書, Gorin no Sho) is a classic among essays on military strategy and summarizes Miyamoto’s lifelong knowledge. It is also known as The Book of Five Elements, as it is divided into five chapters corresponding to the elements that constitute the universe according to the author.

The Book of Earth discusses military art and the figure of the samurai. The Book of Water focuses on the attitude of mind and body in battle, stating that they should be as flexible as water when fighting the enemy. The Book of Fire starts with the idea that even a small flame can start a fire, explaining how this concept can be applied in battle. In The Book of Wind, the element “wind” stands for “style” and the chapter analyzes the different schools of swordsmanship.

The last one is The Book of Void, a very short and purely philosophical epilogue. The void is the non-existent and the unknowable. It represents extreme freedom. Only by knowing the existing, can you know the non-existent.

“Examine, invent, discipline”: Miyamoto Musashi repeatedly writes this in the first four volumes of The Book of Five Rings. Following his path will lead to a free spirit, with no hesitations.

He also writes: “Respect the Buddha and the gods, but do not depend on them”. I wonder if this statement was inspired by his retreat at Unganzenji…

Taking a Break at Café Kokopelli

It must have been the sacred nature of the place, but the visit to Unganzenji and the cave left me in a meditative and relaxed state of mind. I wasn’t ready to move on to my next destination just yet. I needed a break in order to fully embrace the feelings awakened by the temple (as well as to eat something, because it was about lunchtime).

Unganzenji is situated in an isolated rural area, so don’t expect to find a wide choice of restaurants, let alone a konbini. Fortunately, however, the only available nearby option is quite peculiar and unexpected: Cafe+Antiques Kokopelli, a coffee shop that is also an antique and accessories store.

It is a lovely place with a retro, European-inspired vibe, hosted in a country house. The cafe had just the kind of relaxed environment I was looking for after visiting the temple. And the food was great too, both in taste and appearance!

How to get to Unganzenji from Kumamoto

By public transportation: Take the Sanko Bus (産交バス) from Sakuramachi Bus Terminal (桜町バスターミナル), then after about 30 minutes get off at Iwato Kannon Iriguchi (岩戸観音入口); the temple is a 20-minute walk from there. Please note that buses do not run often throughout the day.

By car: Renting a car is the most convenient option, as it only takes around 30 minutes to drive to Unganzenji (Iwato Kannon) from Kumamoto train station.

Unganzenji may seem like a skippable destination when compared to other more popular and impressive temples or attractions. But if you happen to be in Kumamoto, don’t make the mistake of cutting it from your itinerary or visiting it in a hurry. Arrive early in the morning and take your time to enjoy the mystical atmosphere of this sacred place surrounded by nature and history, made famous by Miyamoto Musashi.

Translator and Japanese language tutor. I live in northern Italy but I feel at home in Japan, where I travel as often as I can. I drink a lot of green tea, read tons of books and collect Japanese pottery and kokeshi dolls. Karee raisu is my comfort food.