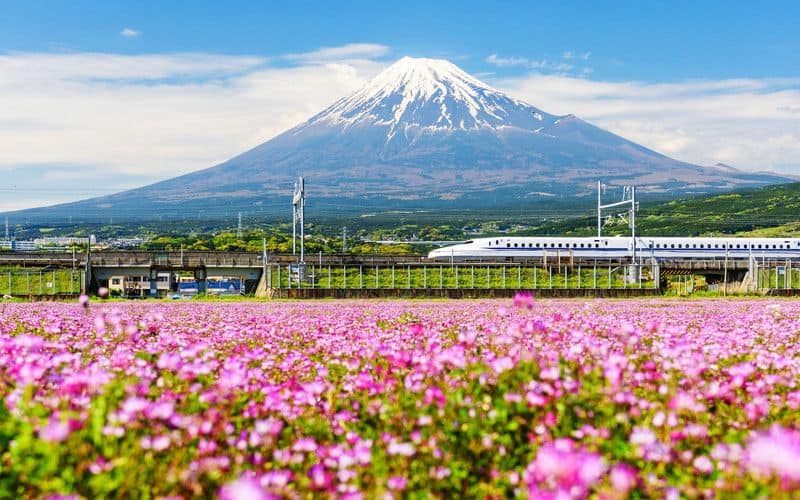 Travelling around Japan is always an adventure, with the efficiency and ease of the various shinkansen bullet trains. Perhaps the most well-known shinkansen route is the Tokaido Shinkansen line which connects Tokyo to Kyoto. The history behind the namesake of the Tokaido Shinkansen is a story in itself. Having lived and travelled within Japan for over 10 years, I never actually knew why it was named the Tokaido until I did some digging into the history of the old Tokaido Road.

The History of the Tokaido Road

Tokaido (東海道) literally translates to “Eastern Sea Route” and connected the old capital of Kyoto where the Emperor presided to the new capital of Edo (present-day Tokyo) where the Shogun lived. It refers to the most important of the five ancient highways (gokaido, 五街道) in Japan constructed under Shogun Tokugawa Ieyasu’s reign (1603-1605). Ieyasu wished to strengthen his hold over the country after uniting the warring daimyo (regional/feudal warlords). A clever politician, Ieyasu established a policy known as sankin-kotai, which required the daimyo to alternate living between their domain and a permanent Edo residence every other year. Effectively, Ieyasu held the daimyos‘s families hostage in Edo in order to prevent further future conflict. To make travelling easier, the five highways, including the Tokaido road was built.

This weaving, bustling road snaked its way from Kyoto up the eastern coastline shores connecting it to Edo.  The road was vital in maintaining trade, commerce, and communication between Kyoto and Edo. Ieyasu established 53 post stations (55 if you include the terminals of Nihombashi and Kyoto Station) on the Tokaido route for ease and comfort of the travellers, many whom travelled on foot, as horses were restricted for the use of the gentry.  Restaurants, teahouses, various accommodations, and government offices were all near the post stations for accessibility and a night’s rest. There was an average of 8 kilometers between each station.

The Tokaido Shinkansen line closely follows this ancient “Eastern Sea Route” and was named accordingly. Nearly half the stations of the Tokaido road (22 to be exact) can be found in Shizuoka Prefecture.

Utagawa Hiroshige and the “53 Stations of the Tokaido”

Everyday scenes of the old Tokaido life are immortalised in the beautiful ukiyo-e works of famed artist Utagawa Hiroshige. Ukiyo-e are a form of Japanese artwork made using woodblock stencils and paints.

Originally born Ando Hiroshige in 1797; Hiroshige traveled the great Tokaido road in 1832. Inspired by his journey travelling to and from Edo to Kyoto, he created 55 ukiyo-e prints, one for each post station on the Tokaido. It would become his most famous work “The 53 Stations of the Tokaido” (東海道五十三次).

Technically the terminal destinations of the route: Nihombashi in Edo and Kyoto station are not counted in the 53.

Tokaido in the Present

Today, you can find that the Tokaido history captured by Utagawa Hiroshige work is still very much alive and well in present day Japan, from various walking trails like the Hakone Hachiri, the Utsunoya Pass (of which I did a mini hike), various shinise businesses (traditional family enterprises still owned and operated by their descendants for over 100 years) and museums dedicated to Utagawa Hiroshige.

I was fortunate to spend time in Shizuoka Prefecture learning about Hiroshige and the Tokaido. The Tokaido Hiroshige Museum located roughly a 20 minute walk from Yui Station is built on the site of a historic Tokaido inn which was used by the nobility. The museum sits within the inn’s original walls and a serene Japanese garden.

I really enjoyed this museum for its simplistic process layout showcasing how a ukiyo-e print is made, and it’s collection of ukiyo-e first edition prints of “The 53 Stations of the Tokaido” displayed alongside vibrant photographic modern interpretations of the same scenes.

The first edition prints are displayed in constant rotation with other historical sites along the Tokaido, so expect it to vary. You can also try your hand at making your own simple versions of the famous ukiyo-e prints which are rather fun and a very sweet keepsake. The “make-your-own” versions also rotate in design. Another wonderful keepsake is the simple handkerchief printed with various Tokaido seals, and when you have visited the sites they represent, you can stamp them with the corresponding image.

Exploring Japan’s ancient Tokaido Road is extremely easy now, especially if you hold a JR PASS. By taking the Tokaido “Kodama” shinkansen (which stops at every station along the line), you can extend your travels between Tokyo to Kyoto by using one of the six shinkansen stations in or near Shizuoka Prefecture: Odawara, Mishima, Shin Fuji, Shizuoka, Kakegawa and Hamamatsu as your bases to explore the old Tokaido Road.

Getting to the Tokaido Hiroshige Museum