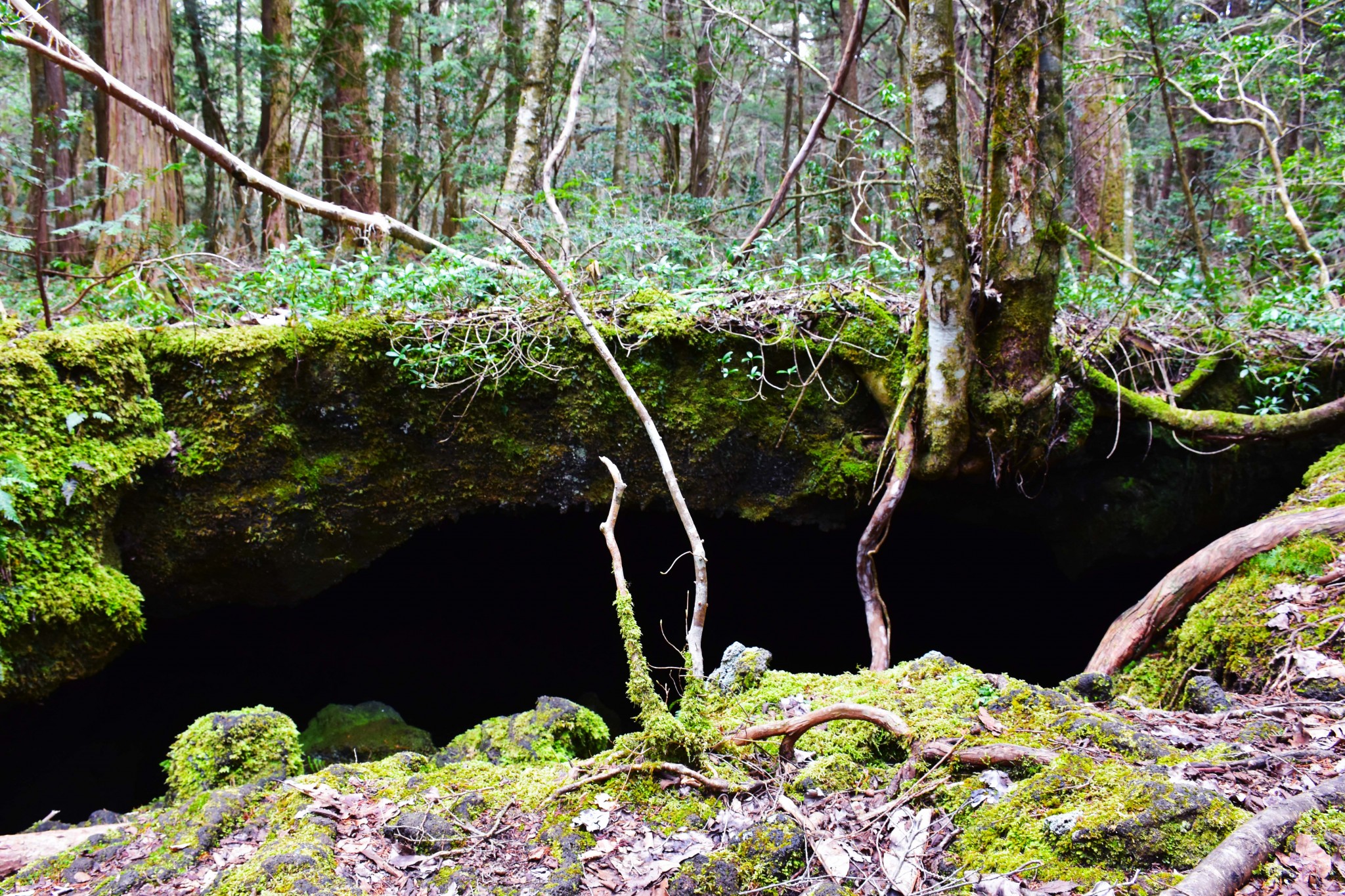 A note from the Editors: This article is written for people who are interested in hiking in the beauty of Aokigahara forest. We do understand there are those who are interested in the macabre aspect of this area (which is probably how you found this article). We have recently edited this article to focus on the hiking trails. We strongly recommend that you do not leave the designated paths as it is very easy to get lost in the forest and cellular coverage is spotty.

If you are struggling with thoughts of suicide yourself, we encourage you to share those thoughts with someone close to you or one of the many free resources available with people to talk to.

Japan’s infamous “suicide forest” is known as Aokigahara Jukai 青木ヶ原樹海 in Japanese, with Jukai meaning “sea of trees”. It is located in Yamanashi Prefecture in the northern foothills of Mt. Fuji 富士山. As its name suggests, the forest in this area is lush and dense, making it a refreshing place to hike during the hot summer days as a day trip from Tokyo.

If the forest seems eerily quiet here, there is actually a geological, not supernatural reason behind it. Over 1,000 years ago, Mt. Fuji erupted and spewed lava over the surrounding area. The forest eventually grew over the lava, but the rock below the soil absorbs sound, making the atmosphere seem quieter than it actually is. This volcanic soil also contains iron which can cause compasses to give misreadings and interfere with cellular transmissions, another reason not to leave the main trail.

Because of its macabre history, people sometime report sightings of or experiences with spirits or ghosts in this area. Of course, these events are reinforced by the portrayal of Aokigahama as a haunted place in folklore, movies, and television shows. Still, if you are intrigued by the supernatural and also love the beauty of nature, you won’t find another place quite like this in Japan.

The History of the “Suicide Forest”

It is said that a long time ago, families who could not feed all their children would sacrifice one of their family members to Aokigahara. That person would slowly starve to death so that the rest of the family could survive. Legend has it that this person would often become yurei 幽霊, a ghost that is unable to leave this world.

Although the dark reputation of Aokigahara has been around for centuries, it was unfortunately revitalized by the publishing of two novels, one in the 1960s and another in the 1990s, that glamorized this forest as a place to commit suicide.

In the late 1990s, the number of suicides that took place in this forest was so high that police started to do sweeps once or twice a year. Police do not publish the number of dead found in an attempt to draw less attention to this place as a suicide spot.

Despite the horror stories and dark history, I find this forest absolutely beautiful. The trees are tall and create a canopy that prevents the sun from heating up the forest and letting in too much light.

It is a silent and tranquil place. But as I have already stated, it is also a dangerous place to hike, especially if you wander off the trails. Stay on the trails and always hike with at least one other person. Besides the possibility of getting lost, there are many wild animals living in the forest.

I understand the attraction of this mysterious place. Even though I’m not scared or fascinated by these stories, it is still a place that calls to me.

Where To Start Your Aokigahama Hike

If you decide to hike Aokigahama, you have a couple of choices on how to do it. Aokigahara forest’s south end is near Saiko Lake. This is a good starting point for hiking in the forest, and there is also a great information place where you can get a map and directions in English before getting started.

There are several trails to choose from. They range from 40 minutes to several hours in length, depending on what you would like to see.

To get to Saiko Lake, you can take the sightseeing bus from Lake Kawaguchi. It is more convenient to go by car, and there are signs in English all the way to the starting point at Saiko Lake, and free parking once you arrive.

The Caves of Aokigahara

There are around 200 caves hidden in the area around Aokigahara, but there are two in particular that are developed and recommended for those who love a little underground exploring.

Saiko Bat Cave is located at the starting point of the hike from the south end of the forest near Saiko Lake. This cave will be your reference point when looking for signs if you are driving here. This is where you will find your information point with maps, and even audio-guided tours you can listen to while hiking. If you’re looking for bats, you may not see any; unfortunately, the bats were nearly brought to extinction a few decades ago and are still only slowly growing back in numbers.

From there, my recommended route is to continue toward Narusawa Ice Cave (Narusawa Hyouketsu). The temperature in this cave is always very low, around 3 degrees Celsius, so be sure to bring suitable clothing. You can see pillars of ice in the two halls of the cave throughout most of the year.

If you want to see special plants and wildlife, then you don’t need to search since you will find it in Aokigahara no matter which trail you choose. You’ll also find that even in light rain, you can easily hike in the forest because the thick canopy will keep you from getting wet. Wear sturdy hiking shoes, however, as the trail and stairs of the caves can be slippery.