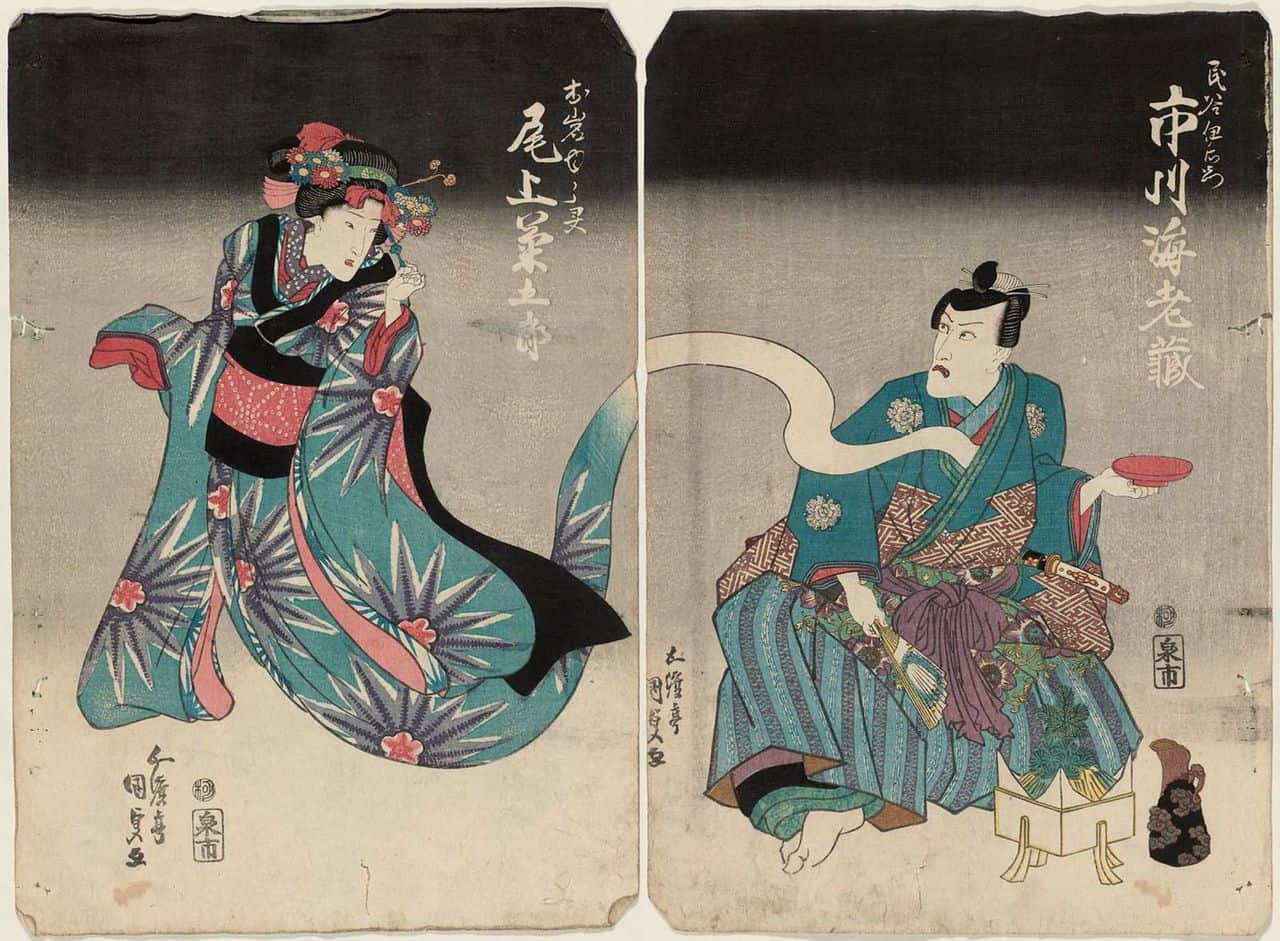 Yurei: The Japanese Culture of Ghosts through History

In many cultures, the deceased have great relevance. And Japan is no exception: death is almost as important as life. When a person dies, their soul travels to the yominokuni (黄泉の国), the Shinto afterlife, or the anoyo (あの世), the pure land of the Buddhists. But the road is not easy, and any obstacle towards that goal can make this spirit turn into a yurei (幽霊), a Japanese ghost.

These souls, trapped between the world of the living and the dead, have had a great transcendence in the world of storytelling in Japan. Legends, rumors, traditions, and mysteries have endured till nowadays. A clear example is the Obon Festival, one of the most notable dates on the Japanese calendar when families gather together to honor their ancestors.

Be brave, and immerse yourself in the world of the yurei!

The Beliefs of Death in Japan

Before I start, I will give a brief explanation of the meaning of death in Japan to help understand where yurei come from.

According to Shinto tradition, we all have a God within us — similar to what we know as a soul sustained by our flesh. When we die, God frees themselves from our bodies.

This spirit has to reach the afterlife, but this can be an arduous task. That is why, when a family member dies in Japan, the living relatives have to watch over the deceased, help them and accompany them during their journey to the afterlife by doing certain rituals. Once they have overcome all obstacles to the afterlife, this ancestor will watch over their living ancestors on the earth to protect them from any misfortune.

But those who have had an unnatural death, left some issues unresolved, or did not have a well-performed ceremony, could be stuck between life and death. Thus, the yurei are these agonizing souls who won’t rest until they solve their earthly problems.

The Features of Yurei

The word yurei comes from the kanji, yu (幽 – dark) and rei (霊 – soul). A yurei often has a human shape without feet, floating in the air. In addition, they have long black hair and wear a white kimono used during funeral rituals. They can also have some deformity since they take the appearance they had just before dying.

I want to note that a yurei is not a yokai. The most notable difference is that the yokai are supernatural but earthly beings; therefore, they are not dead. If you want to know more, visit the article where we talk about these beings (soon available).

There are several types of yurei, classified according to their earthly agony. For example, the onryo (怨霊) are vengeful ghosts who died having resentment to someone or something. There are also the kosodate yurei (子 育て幽霊), the spirit of a mother who died during childbirth and returned to the living land to care for her child.

Finally, I will mention the funa yurei (船幽霊), the souls of the people who died at sea.

Some yurei are aware of their situation with whom you can dialogue with, and even help them solve their problem to rest their souls. But, there are also the jibakurei (地 縛 霊), a ghost tied to a specific place. These are the most fearsome, as they have a curse (祟り, tatari) that can trap those around them.

Believing in the supernatural, superior, and fearsome spirits is deeply rooted in Japan’s unique dominant religion — a mix between Shinto and Buddhist — which greatly influenced Japanese culture and society into our current days. We can see the Shintoist’s idea that everything has a spirit or kami (神 – God) inside every thing and being, and the Buddhist‘s belief of the afterlife.

We can see some primitive features of ghosts in Hokkaido’s Ainu culture, who believed that spirits (takup) were the evil part of a person who sent messages to the living through their dreams.

In Japanese culture, the wrath of the dead who can’t rest in peace has always been feared. That is why every time an emperor died, it was necessary to move to another palace since the yurei of the former emperor could stalk his successor.

The same happened with a famous suicide ritual, the harakiri (腹切り) or seppuku (切腹): when a samurai lost a battle, he was allowed to die “with dignity” without being executed by their enemy, but by themselves. Thus, they avoided a possible vengeful yurei after his death.

Since the Heian period (794 – 1185), people developed religious practices to appease spirits. They even created the Goryo Shinko religion, where its temples were devoted to these difficult souls. However, it is unnecessary to go back centuries to see these sacred places dedicated to soothing these tormented souls. This is the case with the controversial Yasukuni Shrine in Tokyo, dedicated to World War II’s fallen soldiers.

We also have the example of the 2011 Tōhoku earthquake and tsunami. Many people died fearfully and, therefore, many frightening stories related to the appearance of yurei followed. Richard Lloyd Parry, a reporter for The Times of London in Asia, tracked the disaster. During his search, he uncovered stories of wives seeing their dead husbands or phone calls to the fire department, asking for help from houses that no longer existed.

It’s no wonder that something as important as ghosts have been reflected in Japanese art.

Many Edo Period artists made yurei related artworks into ukiyo-e paintings and woodblock prints. One of the first paintings was the “The Ghost of Oyuki,” created in 1750 by Maruyama Okyo and based on the artist’s own experience. One night, he woke up seeing the spitting image of his dead lover. It shocked him so much that he decided to paint her portrait, matching all the features of a yurei.

If you want to see more artwork, you can visit a collection during August at Zenshoan Temple (全 生 庵, Yanesen, Tokyo). They have 50 paintings representing different yurei.

Contemporary paintings draw on the culture yurei as well. For instance, in the Hiroshima Panels, artist couple Maruki Iri and Toshi Marukiha created a series of drawings that reflected the aftermath of the atomic bomb of WW2. The first of the collection is called Yurei and represents all the souls who became ghosts because they couldn’t die in peace.

Fiction and Traditional Tales of the Yurei

Fiction has a huge impact on the spread and creation of horror stories. We find characters representing yurei from the ancient Kojiki (古事記), a chronicle of myths, legends, and oral accounts of Japan’s history dating back to the 8th century, to the contemporary novel of Kafka on the Shore by Haruki Murakami.

During the Edo period, horror stories named kaidan (怪談) became popular, where many writers traveled to cities and towns in search of unique yurei ghost stories and legends within those areas.

Three of the best-known stories in Japan are the San O-Yurei, the three great ghosts. The first one is Oiwa (お岩), the yurei of hatred, and a Chinese adaptation. The second is Otsuyu (お露), the yurei of love, created for a traditional kabuki theater play. Last but not least is Okiku (お菊), the yurei of torment, a folk tale of uncertain provenance.

This last of the San O-Yurei stories is significant, as many legends talk about Okiku’s ghost, known as sarayashiki (dishes’ mansion). The story is of servant Okiku who worked for a wealthy family. This family owned an important collection of ten porcelain plates. One of the dishes disappeared, and they accused Okiku, who then threw herself into a well. There are many versions of this story, but one thing in common is the disappearance of the object and her tragic suicide. Even though there is no evidence, many ascribe Himeji Castle (姫路城) to where Okiku’s ghost dwells.

Many yurei characters appear in noh (能) or kabuki (歌舞 伎) plays, as death is often a recurring theme in dramaturgy. More specifically, kabuki was the precursor to many ghost stories during the Edo Period. This theater type was intended for the working class society, where many topics were treated without any taboo. Thus, a new genre of kabuki was created called kaidan mono (怪談物).

Moreover, it was there when they created the physical idea of the yurei, as we know it today. We can highlight the makeup named aiguma, distinguished for its extreme paleness and deep, black eyes — the very same features that we can see in some characters in the Ju-On film. Long-haired wigs were also essential, fostering the irrational fear of women’s long hair and special effects to generate a feeling of absence of legs.

Yurei became known in the Western countries, thanks to the Japanese horror movies (J-Horror).

One of the most famous movies is The Ring (リ ン グ, by Hideo Nakata, 1998), the most profitable horror movie in Japan. The story is about a cursed videotape, in which a girl appeared through the screen when one watched the tape. The character of Sadako has the classic appearance of a Japanese ghost, and, as she comes out from a well, she reminds us of Okiku’s story.

Another well-known yurei saga is Ju-On (呪 怨, by Takashi Shimizu, 2003). In this movie, we see a cursed house where trapped jibakurei seek revenge. I want to outline that the appearance of one of the characters, a ghost child, has clear references to the makeup of the kabuki theater, with deep black eyes.

Jiko Bukken: A House with Dark Past

In this last part, I’m going to talk about the jiko bukken (事故物件). This type of house’s classification includes those where murder, suicide, or any other unnatural death took place. You can also find houses built on top of a well, a crematorium, or a place where there was a fire or flood that caused damage or death—basically, any house with a dark past.

These houses are marked for life: its price is much lower since many refuse to live in a house with such a dark history, for fear a yurei could inhabit the house, and supernatural events could occur.

If you are curious to know which houses are jiko bukken, use the Oshimaland website for more of these haunted houses. If you move the map, you will see the large number of houses marked in Japan!

After everything you’ve read, it might feel like this is someone else’s story unrelated to us. But let me conclude this article with my personal experience of a yurei. During one of my trips to Japan, I shared a room in an old ryokan with a Japanese person. The next day, he confessed that a “ghost” had visited us during the night. A girl with long hair looked at us and had gone out through the window. And when I looked, the window was, indeed, open.

Was it true? Was it a series of coincidences? Something culturally deeply rooted? I can’t give any clear answer. I can say that after knowing all the history of the yurei, perhaps there are many inexplicable things that surround us, and still many more to know!