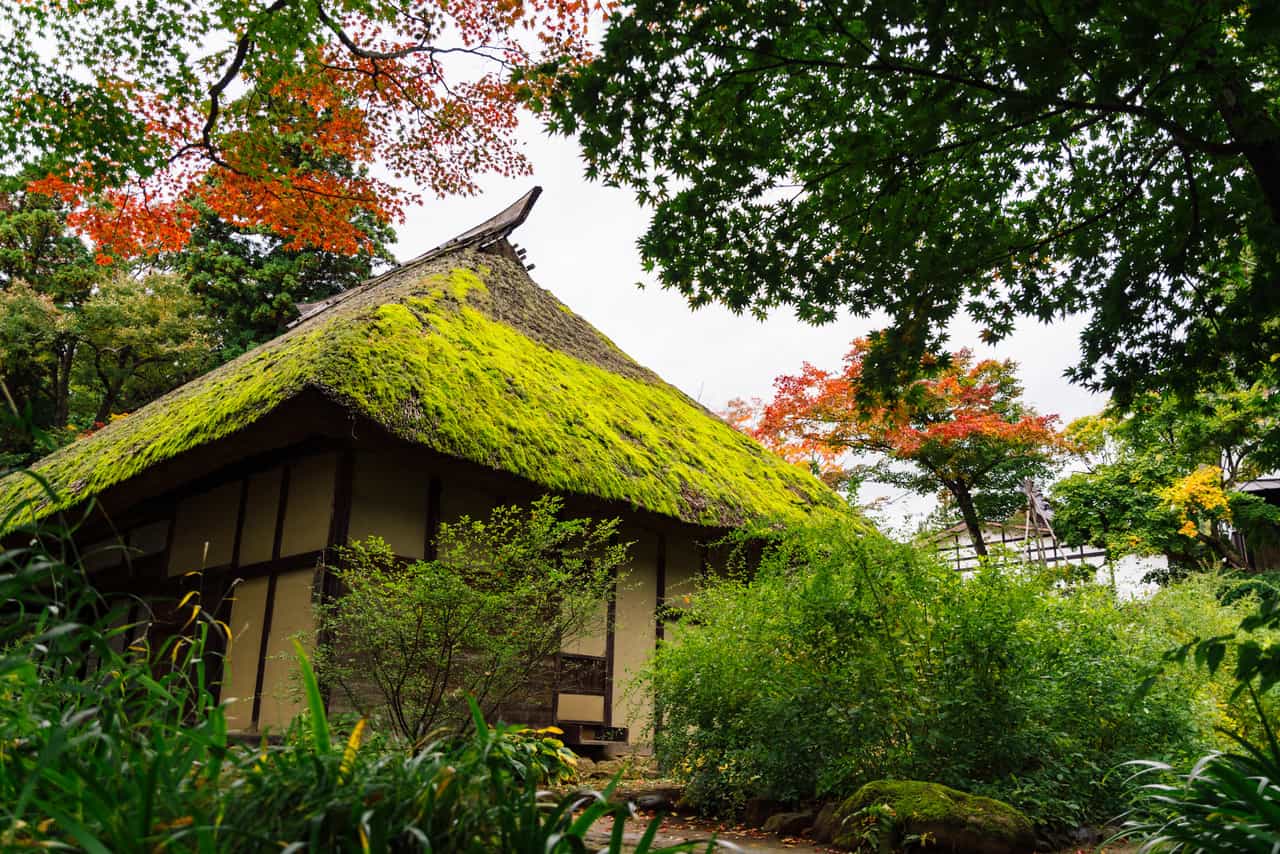 Among the Ancients: Exploring the Sacred Places of Iiyama and Kosuge, Nagano

The cedar trees were impossibly straight, like huge iron pipes driven into the ground by unseen hands and left for centuries to gather moss and dust. Standing at the base of one of the cedars and looking up reminded me of my scale among these silent giants, nearly insignificant in terms of size, age and stature. It was the silence that echoed here in Kosuge Village, where shrines that existed well over a millennium ago are still here, in the shadows of the great-grandchildren of the trees among which they were built. 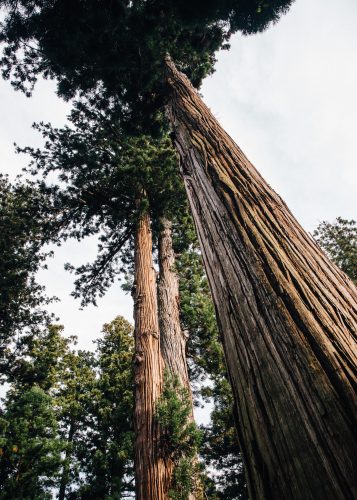 Belying the peaceful atmosphere of Kosuge Village is its history, steeped in the violence of battles over the strategic geographical location of the area. From the late 10th century to the late 12th century, battles between the Takanashi and Ichikawa Dynasties took its toll on the village. After a few centuries of peace and subsequent rebuilding, the Warring States period of Japan of the 15th and 16th centuries brought more destruction. Around the 1560s , the Samurai Warlord Uesugi Kenshin prayed for victory against his nemesis Takeda Shingen at the shrines of Mount Kosuge. In an apparent act of revenge, Takeda attacked the village in 1567, burning down all the important buildings except one. When peace returned to the area in the early 1600s, the members of the Uesugi clan rebuilt the damaged and destroyed structures. Today, the buildings and surroundings are no longer maintained by the clans nor the Shinto or Buddhist priesthood, but by the villagers who continue to live in the area. A large scale reconstruction of the area last took place in 1923.

Niou-mon (the Niou Gate) sits in the middle of a small intersection at the bottom of the hill leading up to Kosuge Village. It was the main gate leading to the temple complex built over 300 years ago. It appears strangely out of place both in location and in time, but actually it remains roughly in its original location as the village evolved around it. 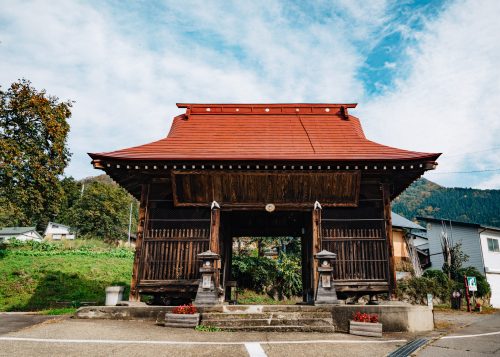 Ascending the village road, we came next to Koudou, once the lecture hall of the Ganryuji Temple before it was burned down by Takeda. It was restored in 1697 by the feudal lord Matsudaira and now contains three important statues of the Buddha. 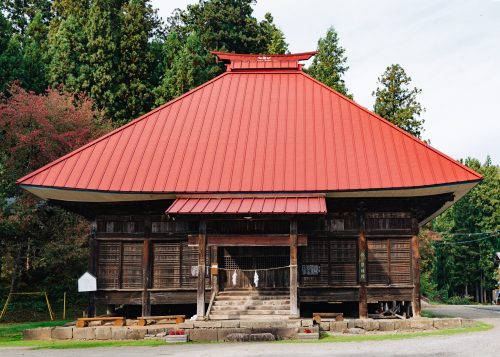 Behind Koudou, we entered the forest and climbed a path of stone stairs flanked by cedar trees to the Satosha Honden, one of the original shrines. My guide Takayanagi-san demonstrated how to purify yourself using the water and ladles at the entrance to the shrine. Clean your hands with the water one at a time, and rinse the ladle (not over the basin though) before replacing it. Some people also rinse their mouths, but do not do this by sipping water from the ladle; pour it into your hand first and sip from there. 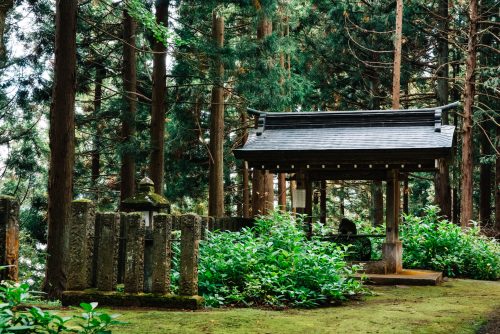 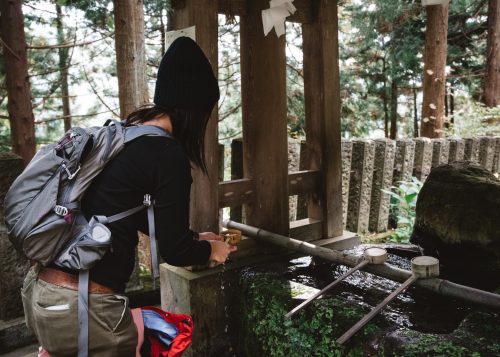 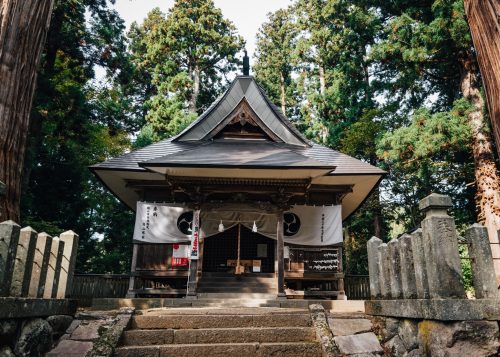 Continuing up the hill (are you starting to see the pattern here?) we came to Bodai-in Temple and the Kannondou. Buddhist objects dating back to the 12th century are contained in Bodai-in as well as Edo Period Buddhist art that are recognized as Tangible Cultural Properties of the city. I didn’t photograph the objects as I have to leave you something to discover on your own when you visit Kosuge Village, right? Outside Bodai-in, a collection of carved stones with Buddhist images sit under multi-colored maples, their faces worn down with time. 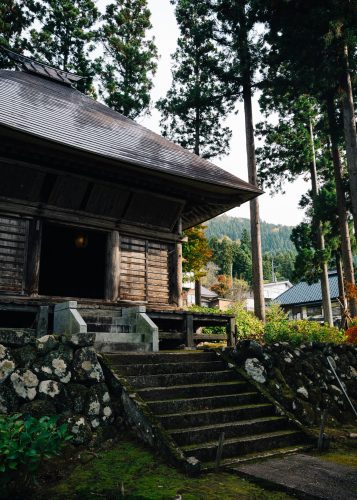 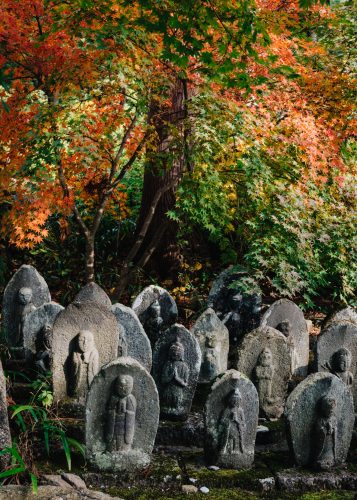 Another 100 meters up the hill brought us to the third torii gate of Kosuge Shrine, marking the final ascent to the ancient shrine itself. After spending the better part of the day trekking the Shin-etsu Trail before coming to Kosuge Village, neither Takayanagi-san nor I were feeling up to tackling the 1.2km, 310m vertical climb hike to the shrine, which takes about an hour from the third gate. The initial 800m of the climb is on ancient stone steps flanked by suginamiki, rows of cedar trees planted over 300 years ago. Rather than climbing any further, we consoled ourselves with the view back down the road toward Iiyama City against the backdrop of Nagano Prefecture’s mountains. The mystery of Kosuge Shrine would have to remain just that, a mystery, until my next visit to the area. 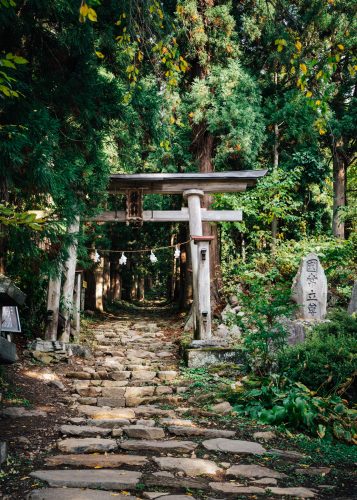 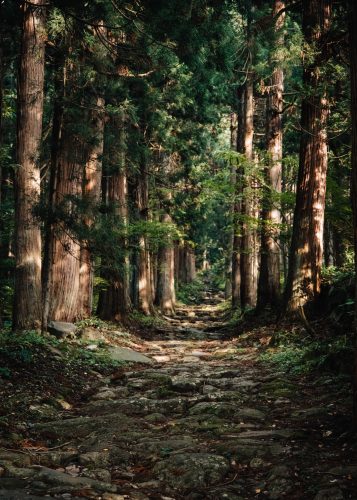 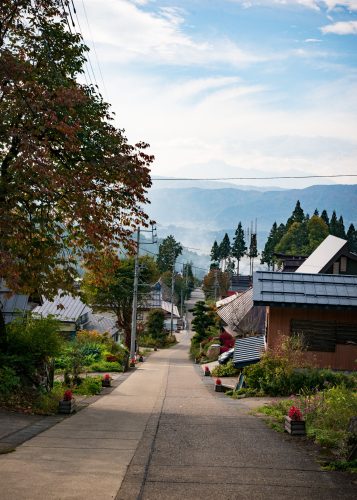 The next morning, feeling refreshed from a good night’s sleep, I decided to explore the area northwest of Iiyama Station before catching the train home in the early afternoon. Called “The Little Kyoto of the Shinshu District”, the foothills in western Iiyama City contain over 20 temples, which in the autumn are reminiscent of the temples in the Kyoto foothills, full of Japanese maples turning hues of red and orange. While my visit was a few weeks shy of peak season, the beauty of the coming fall was on display in several temples. 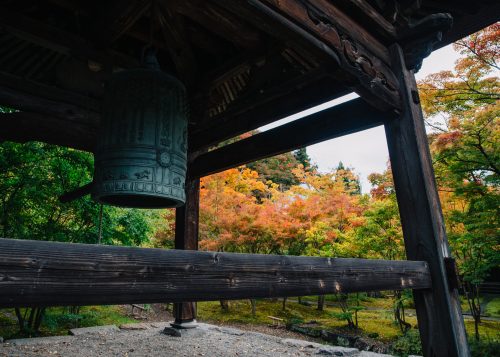 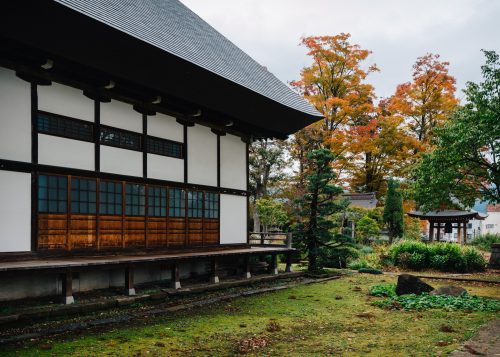 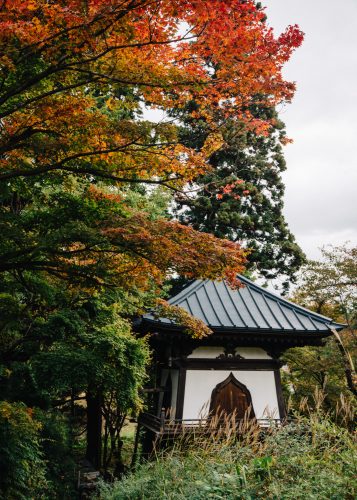 From Iiyama Station, I headed north toward Iiyama Cultural Hall, a modern architectural masterpiece by Kengo Kuma which was completed at the same time as the new Hokuriku Shinkansen Line in 2015. 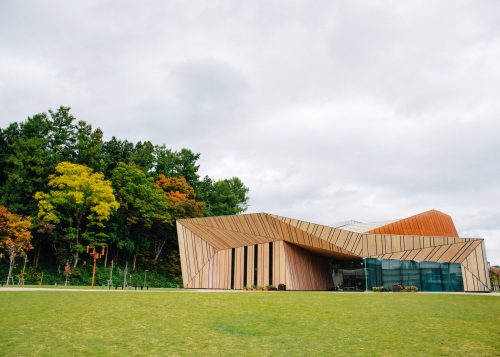 To the left of the hall, up a steep set of stairs is Katayama Inari Shrine, on a hill overlooking the city and a small cemetery. Inari shrines are ubiquitous Shinto shrines dedicated to the god of rice, and often use the image of foxes which are considered messengers of Inari. Continuing north down the hill and through the cemetery, you will come to Saikyoji, one of the temples along Iiyama’s “Tera Meguri yuuhodou”, the pedestrian path constructed to connect the various temples and make it easier to see them all. A map of the path is near each of the temples on the route, making it easy to figure out where you are and where the next temple is. 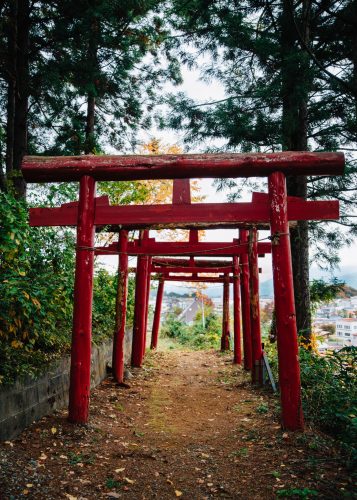 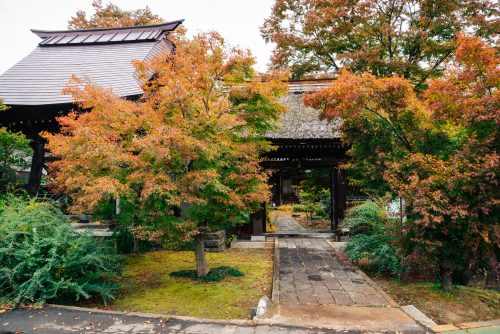 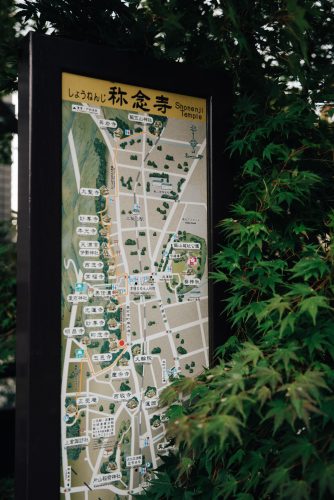 Perhaps the gem among gems of the temples is Shonenji, particularly in the Autumn when the courtyard so densely populated with Japanese maple explodes in color (again, I was a couple weeks early, so the colors are not at peak in my photos). Tour buses of domestic tourists are a common sight on Autumn weekends but the crowds are never so great that you can’t enjoy a moment of solitude among the trees. 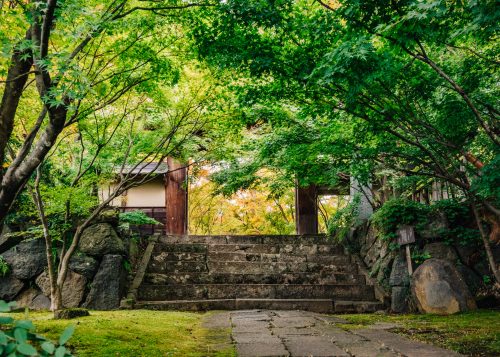 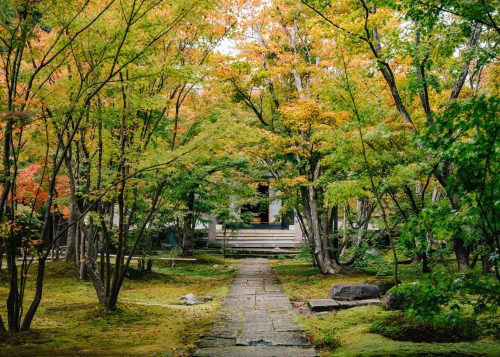 Not far from the entrance to Shonenji Temple is the Buddhist Altar Street, notable for the unusual architecture of the buildings which includes a covered walkway over the front of the store. Due to the large volume of snow Iiyama receives in Winter months, this architecture style keeps the sidewalks clear and protects the shops and houses that employ it. 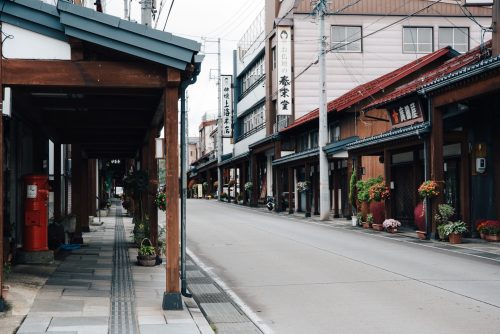 I dropped into one of the shops, which the young owner said had been in his family for 200 years, to ogle the Buddhist altars, assembled with care using some of the finest woods available in the area. The obvious question to me was how do so many shops selling Buddhist altars manage to stay in business in a relatively small city like Iiyama? The first part of the answer was that houses in Iiyama were on the whole much larger than those in big cities like Tokyo and had space for sizable altars, though modern houses were getting smaller in this respect. Nearly every household would have an altar, not to mention the large number of temples existing in the area that I had just been walking in. The second part, less obvious, was that Buddhist altar shops did not just sell new altars, they maintained existing ones. The maintenance requirements for all of the altars around the area ensured there would be plenty of business for everyone. 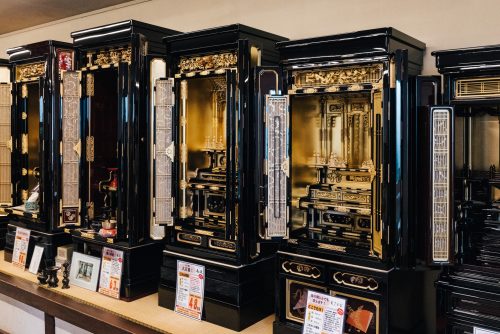 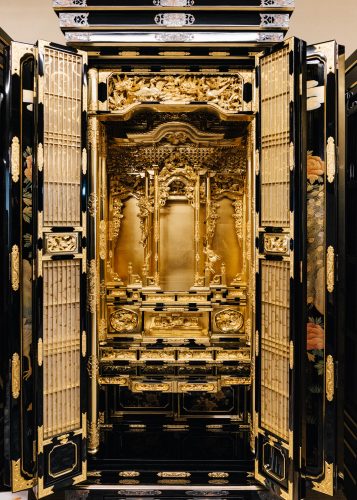 I would have continued to walk the Tera meguri yuuhodou to the visit the rest of the temples, but my phone’s alarm reminded me I’d have to hurry back to Iiyama Station to purchase some souvenirs and catch the Shinkansen back to Tokyo. And there lies the only problem with Iiyama: there is so much to do, you will always manage to run out of time or energy to do it all.

Getting To Iiyama City and Kosuge Village

Getting to Iiyama from Tokyo couldn’t be easier. Take the Hokuriku Shinkansen from Tokyo or Ueno to Iiyama Station and you will arrive in about an hour and a half. From Shin-Osaka Shinkansen station, you will need to transfer at Kanazawa and it takes about three hours and 45 minutes.

There is limited public transportation to get to Kosuge Village from the station so the best way to see it is to find out about a tour of the village from the helpful staff at the Iiyama Station Tourist Information Center on the Ground floor. The nearest bus stop is Sekizawa, which is about 1.5km from the bottom of Kosuge Village. Remember, you will still have quite a hike ahead of you if you want to go all the way up to the shrine, so don’t try this unless you are comfortable with long walks up and down hills!