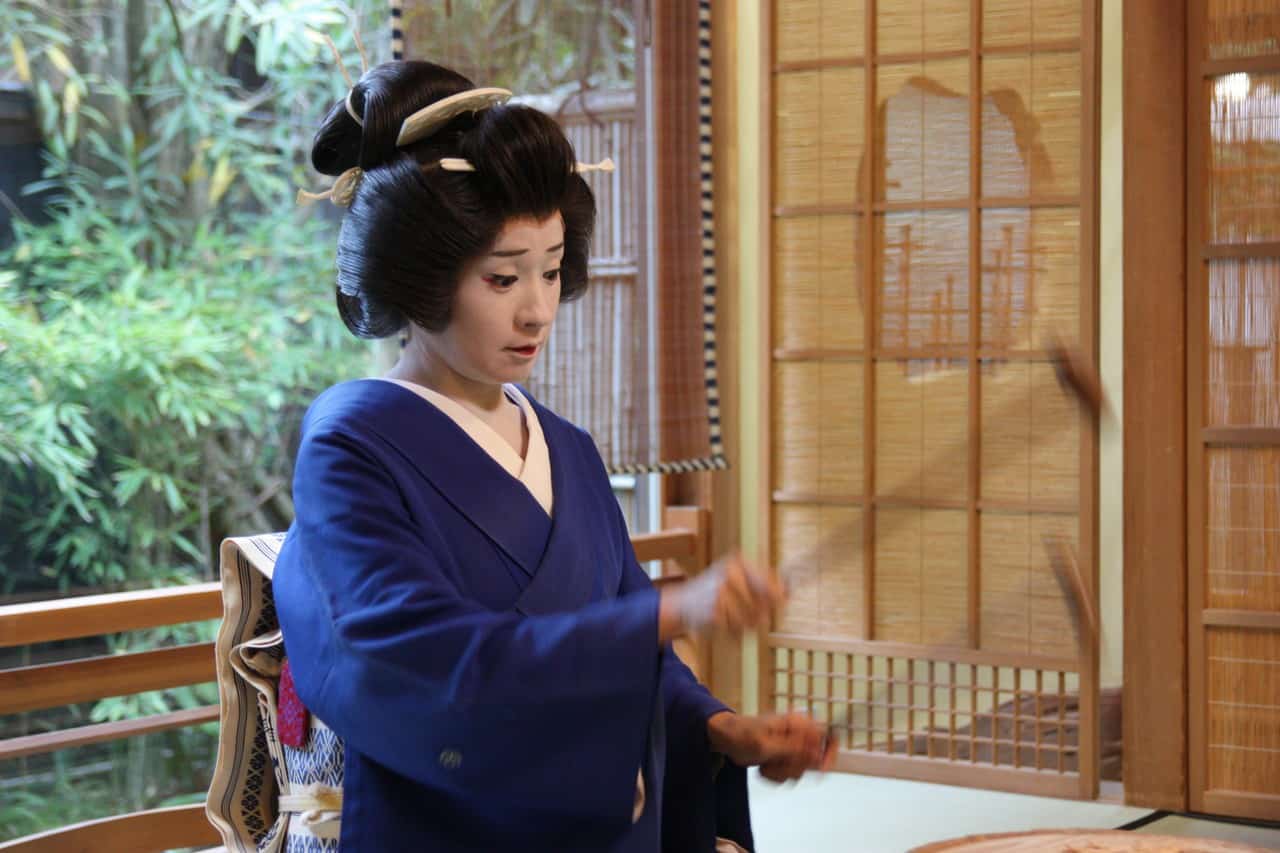 Meeting the Geishas of Niigata (Geigi)

Before visiting the city of Niigata, the only time I came close to meeting a Geisha was in the famous Gion district in Kyoto where I very briefly came across one. A sight of refined beauty, but almost unreal and out of reach, vanishing as fast as she appeared. Back then, I had no idea that other areas of Japan, such as Furumachi in Niigata, were famous for their Geishas and could offer visitors an entirely different experience. Follow along as we meet the Geishas of Niigata, known as Geigi! 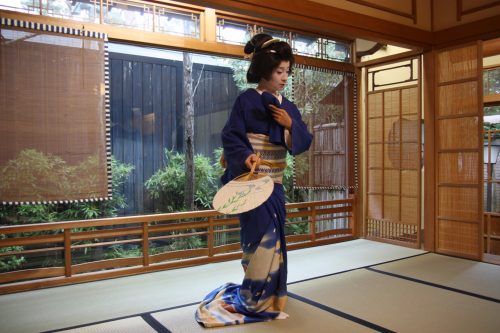 A city with a rich heritage

The city of Niigata, located in the prefecture of the same name, has quite a rich historical and cultural background. Facing the Sea of Japan, Niigata has been a key transit point on the Kitamaebune sea route for more than 300 years. It is thanks to this strategic position that the city became as prosperous as Tokyo and Osaka during the Edo Period (1603-1868) and started opening high end bars and restaurants to welcome all the rich merchants passing by. It is in that context that the Geishas of Niigata—or Geigi, as they are called in the local dialect—first appeared.

Back in those days, they were over 300 Geigis entertaining their guests with dances and songs they could only master after years of learning and practicing. These fascinating and delicate artists would also excel at playing traditional music instruments such as the shamisen flute and taiko drum. To host the performances given by the Geigis, luxury restaurants offering a refined traditional cuisine called ryotei started appearing all around the Furumachi historical district. 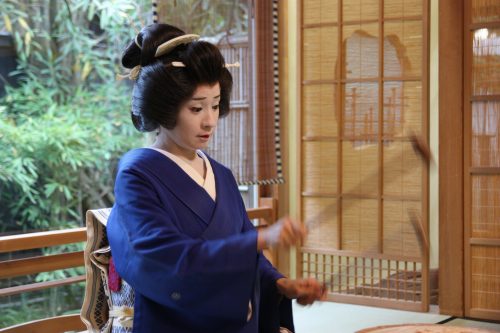 To this day, Geigis and ryotei make Furumachi a lively neighborhood, much to the delight of visitors coming from all over Japan and abroad. About 20 Geigis are still active nowadays in Niigata in the company of whom you can spend a bit of time. If traditionally meeting with Geishas is a rather exclusive event only aimed at a certain category of population, several options are offered in Niigata to make sure the opportunity to meet Geishas is offered to many visitors. You can of course make a reservation in a venue like a traditional tea house or ryotei. But that option being the most expensive, you can also meet the Geigis of Niigata during festivals organized by the city or via the Niigata Hanamachi Chaya program, where groups of visitors get to spend one hour with a Geisha in a villa.

As for me, I had the incredible opportunity to spend the evening in ryotei Ikinariya, an institution which opened its doors more than 300 years ago and has been one of the most renowned ryotei of the city ever since. It was even registered as a Tangible Cultural Property of Japan! For the anecdote, the ryotei used to be separated from a prison just by a small alley. From that striking contrast between the two places, it was renamed the alley of heaven and hell. 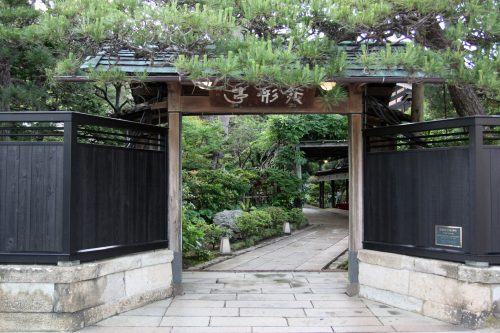 As soon as I set foot within the grounds of ryotei Ikinariya, I quickly understood where it got its heavenly reputation from. From the street, I could barely see anything from it apart from the three staff members already waiting for me at the time of my reservation. But once I was inside I discovered a beautiful Japanese garden. While I was already taking pictures of it, the staff members promised me it would be even more beautiful once the night has fallen. Except for the main building of the ryotei, the other 13 rooms spread out across the garden are so well hidden among the vegetation that I cannot spot a single one of them. 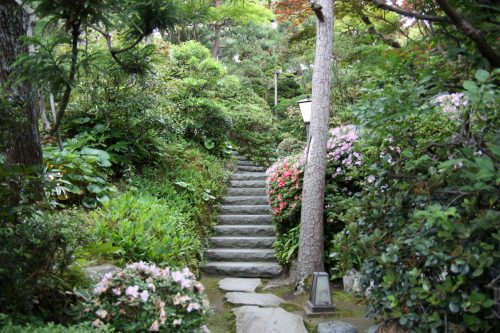 While I am expecting to be led to one of these rooms, staff members suggest I get started with a surprising activity! From the month of May until September, the ryotei offers their guests an appetizer called taki soumen. After crossing the small bridge, passing over the pond filled with a few koi carps, I discover a piece of bamboo cut open in half length-wise thus creating a little canal where water runs. I am given a bowl with sauce and a pair of chopsticks before being told that noodles will soon be passing in the water for me to catch! This exercise is not only fun but actually less difficult than it seemed and I managed to enjoy a few fresh noodles without any incident. 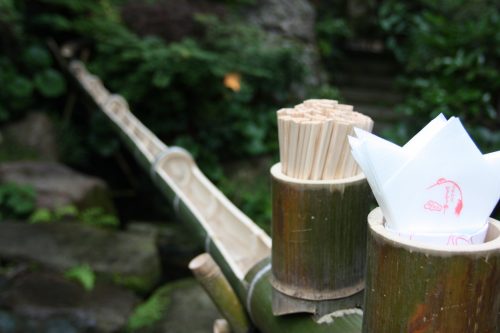 I was then guided to the room where dinner was to be served and where the Geisha was going to perform. The room was spacious, opening on a part of the garden, with a table at its center ready for me to take my place. Before dinner starts, the Geigi who I’ll be spending part of the evening with comes in to introduce herself. Though a bit worried about how I should be behaving in her presence, I do not miss the opportunity to contemplate her magnificent kimono, her impressive hairstyle and her make-up that is so distinctive to Geishas. But even more than her neat appearance, I am fascinated by her poise and the gentleness of her every gesture. Her movements are precise and light and she seems to be hovering over the floor when walking in the room. 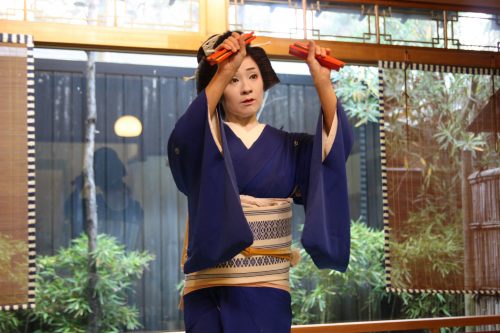 Our evening starts with a little game session (usually a game with Geisha would be after dinner). I am guided by the Geigi into a musical version of the paper/rock/scissors game, played to the rhythm of a shimasen flute melody. While you have to beat a small wooden drum following the right tempo with one hand, the other one is used for the duel. From what I understood, when you lose once, you have to spin around one time quickly enough to keep up with the rhythm. If you lose a second time though, the game stops and the Geisha will pour you a glass of sake. To be honest this easy game from your childhood becomes way harder and intimidating once your opponent is no other that an actual Japanese Geisha! 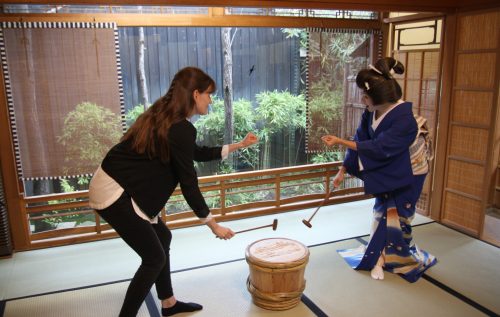 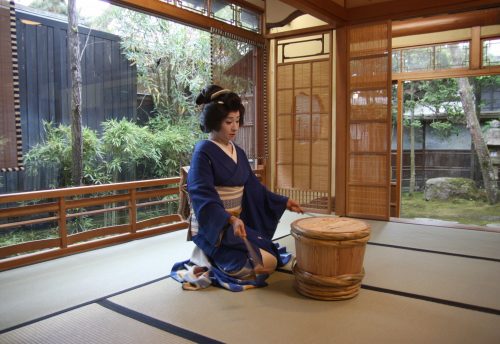 After giving a drumming performance, the Geisha leaves the room while dinner is being served. Before that, she takes time to carefully unfold my napkin and fix it to my shirt with a little pin. Then follows a farandole of delicious dishes all laid out before me. The traditional kaiseki menu offered at the ryotei highlights the many local specialties, such as fresh fish and edamame. It’s a sheer delight revealing rich and subtle flavors. 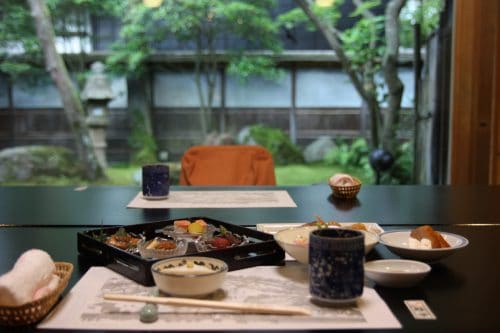 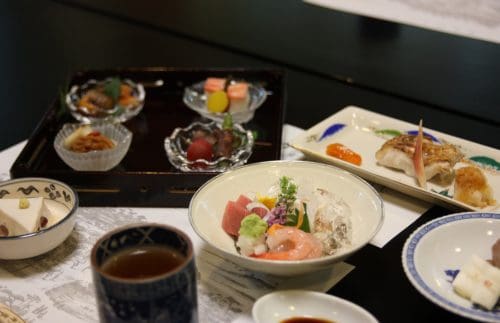 While I am savoring every bite, the Geigi and flute player come back into the room, this time to perform two types of dances. The first one with a nicely decorated fan and the second one with an instrument similar to castanets made of bamboo. 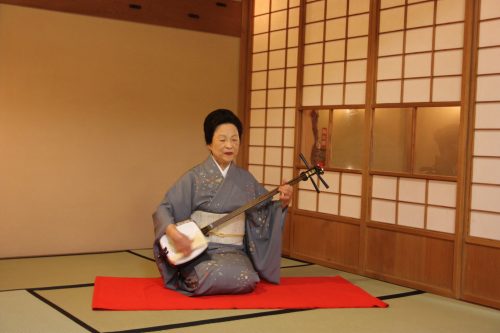 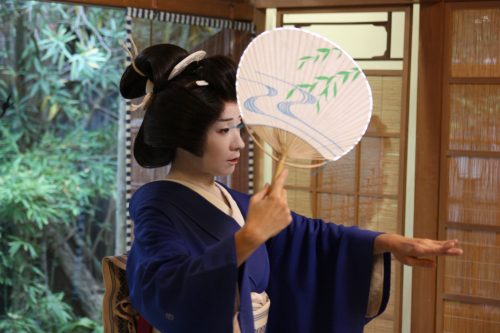 She will then come and sit next to me for a while, showing me this traditional music instrument, making conversation and giving me her card. The musician and the Geigi gladly accept to pose for a photo with me before leaving the room for good. Several staff members will then come by, taking the opportunity to clean one of my dishes or to fill my cup with tea to take a moment to chat. 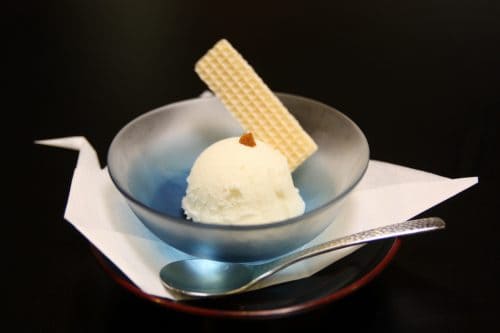 The evening ends on a sweet note with some soya ice cream served with a napkin folded in the shape of a crane, the symbol of the ryotei. And as I leave the room delighted by this rare and exceptional experience, the lit up Japanese garden quietly waits for me in the night to top it all off. 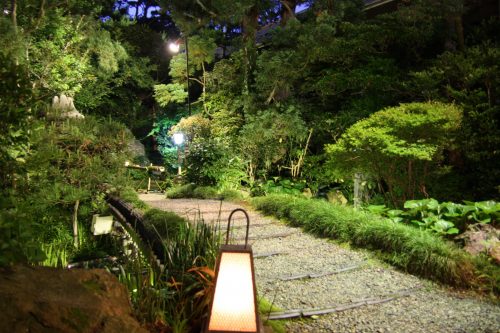 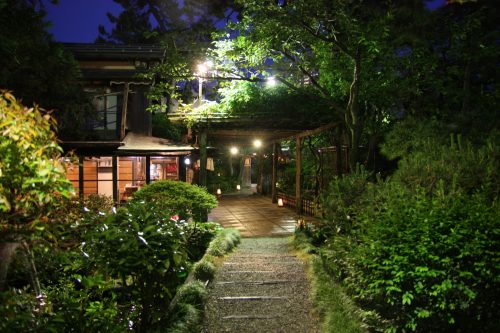 From Tokyo: The trip from Tokyo to Niigata can be easily made via the Joetsu Shinkansen Line in about two hours.

From Kanazawa: You will need around three hours and 30 minutes to reach Niigata from Kanazawa Station via the Hokuriku Shinkansen Line, with a change in Takasaki.

If traditionally not everyone can have such privileged access to Geishas, the ryotei in Furumachi makes it their mission to open their doors to all types of visitors to spread the word about the unique Geigi culture of Niigata. No worries about how to behave, the staff member will guide you and put you at ease. I could visit the place in the company of someone speaking Japanese so I had no problem communicating with the Geisha but I would suggest informing staff members if you don’t speak Japanese while making the reservation (by phone) as some Geishas might be more comfortable than others with English.

For more information on Ikinariya ryotei, check out this page.

And to get an overview of the Geigis of Furumachi, you can have a look at their website (in Japanese).