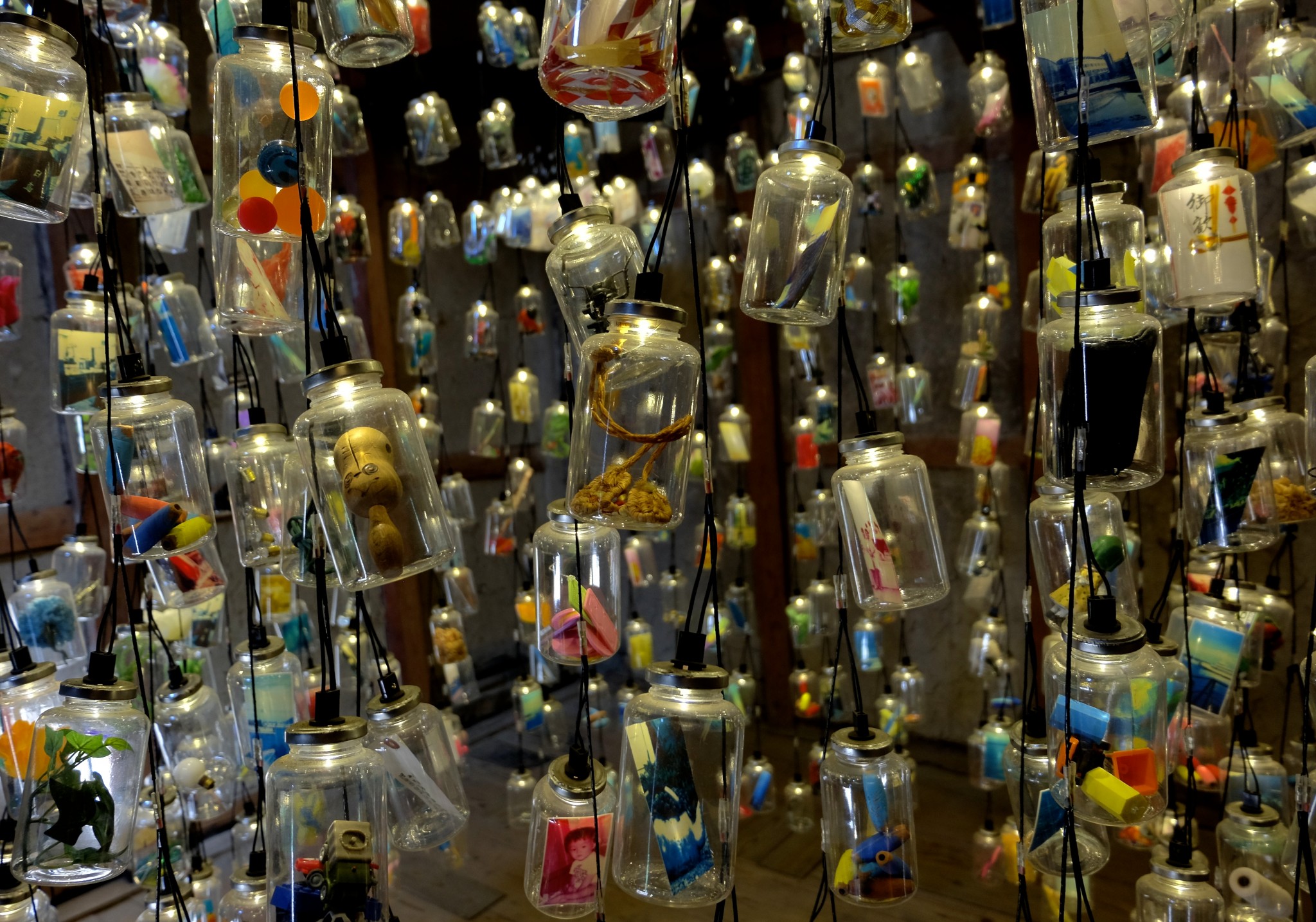 Whether art aficionado or artist, you may have heard of Japan’s mysterious “art islands” located around the Seto Inland Sea. The Seto Inland Sea lies between three of Japan’s four islands: Honshu, Shikoku and Kyushu. Once every three years, the Setouchi International Triennale brings the whole Setouchi community together to show the world an amazing array of Japanese and international contemporary art. During this time, islands that don’t usually attract many tourists  participate as host sites for the event, showcasing open-air art installations and sculptures to the public eye. 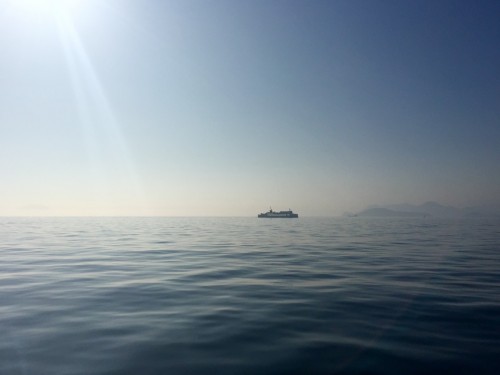 A few weeks ago, I had the lucky opportunity to travel to both Megijima and Ogijima during the Triennale and have the experience of viewing contemporary international artwork in a seemingly unlikely place.  I highly recommend that everyone planning on visiting Setouchi for the 2016 Triennale specifically go to Megijima and Ogijima if they have the chance during the festival’s two remaining open seasons. Its easy to visit both islands in one day from Takamatsu, as they are small and connected by the same ferry route. The sibling islands have a combined population of less than 400 people; as you can probably imagine, seeing contemporary art in such a remote Japanese environment is an experience of juxtaposition that you will not forget! 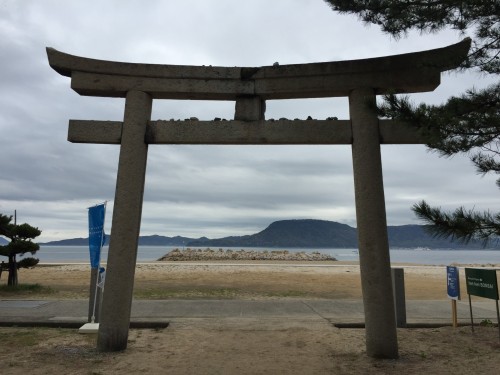 The view from Megijima on a misty morning

Megijima (女木島) is a small island located north of the port city of Takamatsu. In recent years, it has become a more popular tourist destination because it has been linked to the Japanese folktale about Momotaro, a boy born from a peach who visits a mythical island of ogres, “Onigashima.” Thus, Onigashima (Island of Ogres) is Megijima’s nickname. On top of the Washigamine Summit there is a lovely panoramic view of the Setouchi Inland Sea as well as a cavern that is considered to be the home of the ogres in the folktale. In addition, Megijima is home to over 2,000 cherry trees, and people have started congregating from Takamatsu during the spring season to see the beautiful pink blossoms blooming on the seaside. I was lucky enough to attend the Triennale during April and can bear witness to Megijima’s spring scenery – it is totally worth the ferry trip out here! 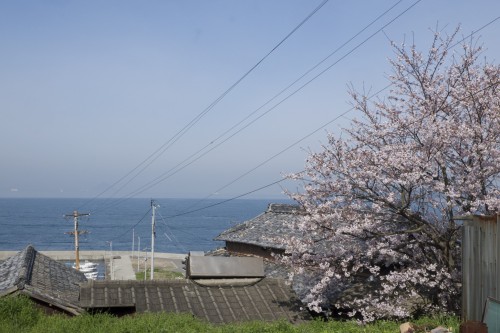 Megijima has only one port and its conveniently located in the community area where most of the art is. Because the island is so small, all the art sites are within walking distance of each other and you won’t get lost like you might on the bigger islands of Naoshima and Teshima. Though you should definitely try and see all 13 of Megijima’s art sites, I think Harumi Yukutake’s “Equipoise” and Musashi Hirao’s “feel feel BONSAI” were the most interesting sites on the island. Harumi’s work envelopes the audience in light reflections that move with the passing of the breeze as ten thousand hand worked mirror plates hang from the ceiling around you. Each viewer has a unique experience in this installation, depending on the weather, time of day, and how crowded the exhibit is, which allows each visitor to reflect on their surrounding in different ways. 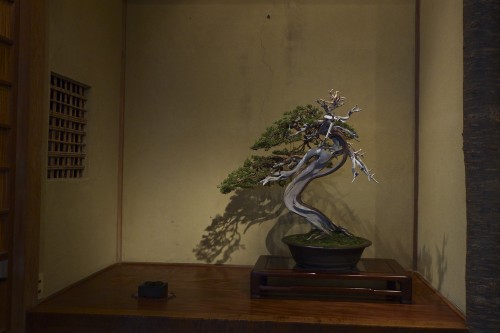 Hirao’s “feel feel BONSAI” is an experience I would recommend for any person that is interested in the Japanese bonsai and the deep philosophy behind it. The artist is often in the bonsai house, as he must maintain and upkeep it relentlessly during the festival, which allows more curious audience members the chance to ask him questions (don’t worry, his English is quite good!). It is a peaceful but stunning art house, complete with a garden, video and sound installation, and live events for each season. 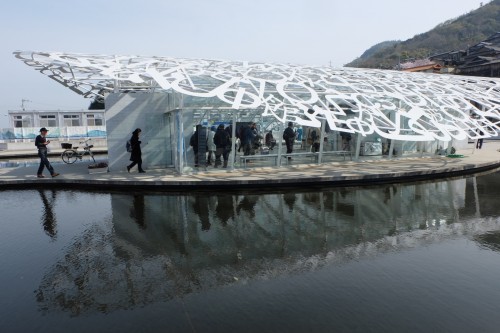 Ogijima (男木木島) is 1 kilometer north of Megijima, about 12 minutes further on the same ferry route. It is even smaller than Megijima, and very mountainous, with narrow and winding paths on steep hillsides, lined with traditional Japanese houses. Finding the different art sites on Ogijima is really fun, because you get to walk around the island’s only village, Ogichō, and get a feel for the local life there. Around each corner there were different surprises – local cafes and vegetable gardens, breathtaking views of the ocean, and of course all the artwork. Ogijima was surprisingly contemporary with 16 different sites, including sound and light installations, open air sculptures, community projects, a giant kaleidoscope, and even an infinity room. 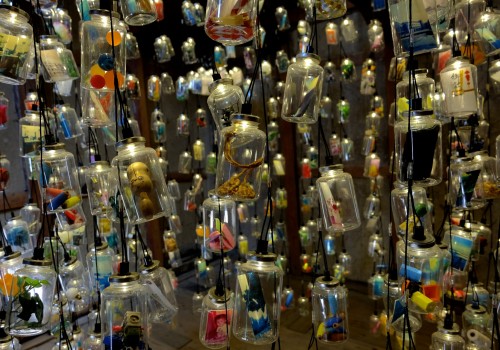 My favorite piece was Mayumi Kuri’s “Memory Bottle” art site. It was installed into an old storage building for boating supplies – the ceiling is very high and the interior is filled with delicate glass bottles with little lights inside the hang from the ceiling, each containing different items. Kuri actually involved the Ogijima community on her piece, harvesting ‘memories’ from the villagers in the form of small knickknacks, toys and photos. In this way, she gives viewers an idea of the things that the people of Ogijima hold dear to their hearts, allowing us to see into their lives. 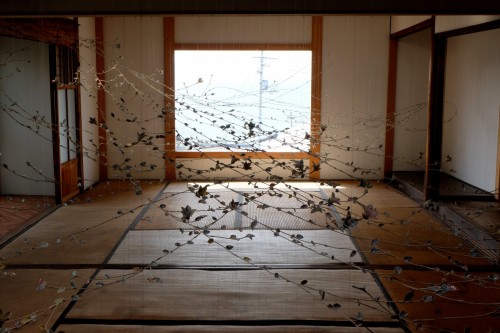 I also recommend seeing Haruki Takahashi’s “Sea Vines” art house – it is a traditional Japanese bedroom filled with vines suspended from the ceiling, leading the eye to an open window overlooking the ocean. The vines are beautiful from the moment I saw them; I felt that they alluded to the wind and waves behind them, but as I looked more closely I realized that they are painstakingly handmade from fragile porcelain – definitely a feat of artistic skill by Takahashi.

Megijima and Ogijima have so much to offer and so few people know about them! So if you are making the trip to Setouchi this year, don’t hesitate to see them both. They are the two sibling islands that you won’t forget!

Californian artist on a life journey; loves collage, coffee, patterns and collaboration. Currently making artwork in different parts of the world, and sharing her travels along the way. Feel free to check out her art at www.easte-art.com!