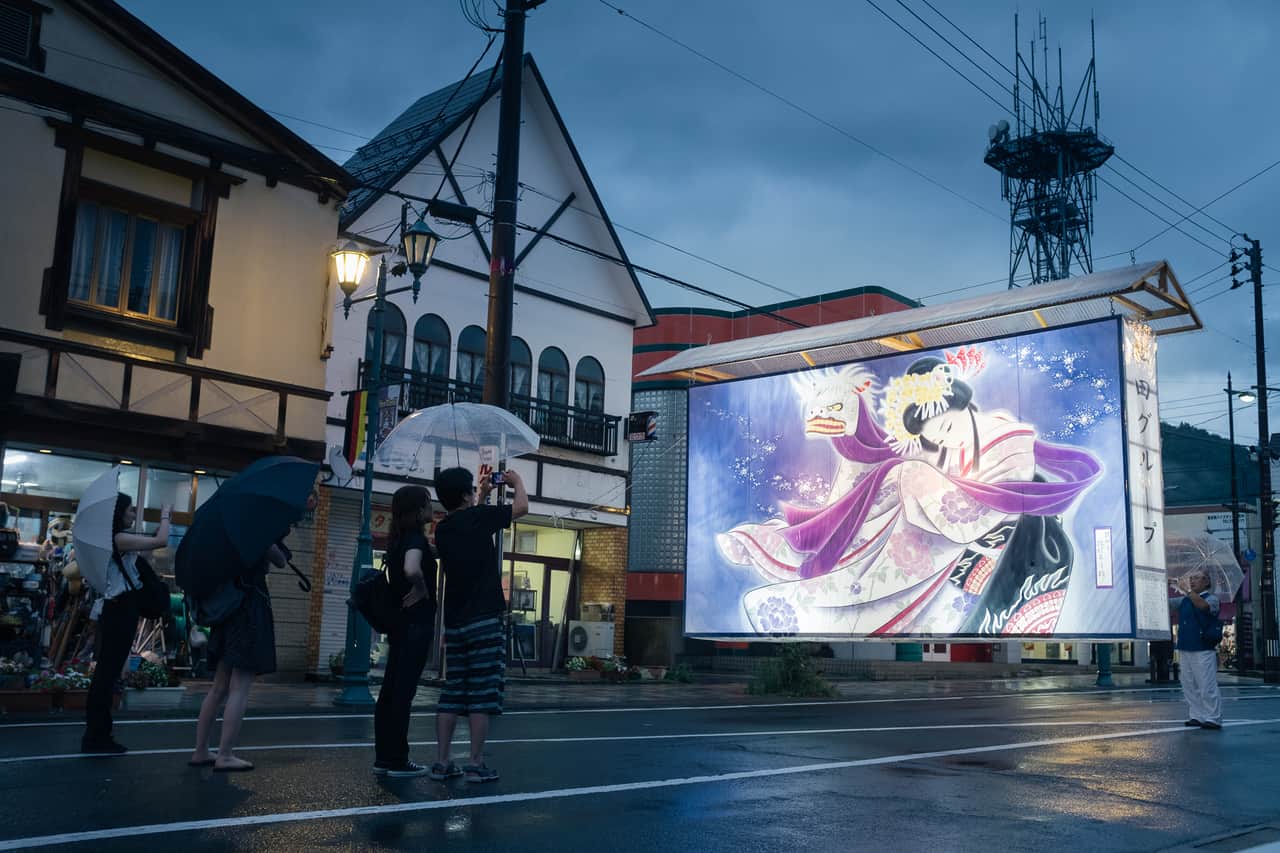 Tanabata festival, a tradition originally coming from China, is very popular in Japan. In Yuzawa, a small city located in Akita Prefecture, Tanabata Festival is celebrated in a different way than the rest of Japan. Drawings of women are painted on large lanterns to decorate the streets of the city centre, thus perpetuating a centuries-old tradition.

The legend behind Tanabata

Tanabata Festival finds its origins in a Chinese legend: a love story between a goddess and a human being. Madly in love with each other, the goddess, Vega, decides to leave the world of gods to meet her lover Altaïr. So focused on their love for each other, they spend all their time together and forget about their duties, which ends up making the gods unhappy with their union. The goddess has responsibilities and her father tracks her down. He decides to take her back with him to the heavenly kingdom, separating the two worlds by a river, the Milky Way, to prevent the two lovers from meeting again. The two poor souls now separated fall into despair, which doesn’t leave the gods indifferent. They decide to allow the two lovers to meet once every year: during the seventh night of the seventh month, the 7th of July.

In China, this legend has turned this day into a celebration for lovers. In Japan, however, the celebration is slightly different. It is taken as an opportunity for people to write down their wishes on colorful pieces of paper that they tie to the branches of bamboo trees. Vega and Altaïr, called Orihime and Hikoboshi in Japanese, will grant their wishes on that day. It is the perfect moment to wish for good health for the entire family or success at exams. All kinds of wishes can be found on these tiny papers that bring color to the streets of Japan during Tanabata Festival.

Edoro lanterns, a unique feature of Tanabata Festival in Yuzawa

In Yuzawa, Tanabata festival takes place in early August. During the celebration, the colorful pieces of paper containing the wishes of all the inhabitants are not the only thing to be found in the streets of Yuzawa. The main attractions are large painted lanterns illuminating the streets of the city, decorated with beautiful drawings of women. That specific tradition is way different than the original Tanabata story. A tradition that goes back to the Edo Period.

In the middle of the Edo Period, a princess of the Takatsukasa family was married to Satake Yoshiyasu, a clan chief. She then had to leave Kyoto, which was back then the capital city of Japan, to settle in Akita Prefecture. She started feeling quite lonely, so far away from the dynamic capital city she was born and raised in. The inhabitants of Yuzawa, sympathizing with her loneliness, created drawings and decorations to remind her of Kyoto and put them up in the streets of the city. This later became a tradition and every year since then, the inhabitants of Yuzawa celebrate Tanabata Festival this way.

Crafted by hand, the drawings displayed every year are true works of art. And they are actually renewed every year. Each time, the inhabitants redouble their efforts to create beautiful decorations for the streets of the city. The edoro are quite large and lit up from the inside. The smaller ones are displayed on the side of the streets while the larger ones are displayed in the middle of the road, which is closed during the festival. Each edoro has two sides, with two different drawings.

All eras and styles are represented. Most of the drawings are traditional ones, but you can also find a few creations with a more modern style, inspired by manga and anime.

In Yuzawa, Tanabata festival includes several events. When the night falls, the lovely streets of Yuzawa come alive in a convivial and friendly celebration. The princess is still part of the festival, represented by an inhabitant of Yuzawa during a parade along the edoro lanterns and thus honoring the reason these drawings of women were first displayed in the streets of Yuzawa.

You can also watch bon odori, a traditional dance performed during summer festivals in Japan. The massive flags waved in coordination with the precise movements of the dancers will sure make a lasting impression on you. Rain started falling on Yuzawa while I was attending the festival and, unfortunately, shortened a bit the evening. But the dancers still braved the elements to offer this dance to the viewers and to the gods.

Rain did not prevent anyone from sampling many food stalls installed along the streets. Takoyaki (octopus balls), yakitori (grilled chicken), chocolate-dipped bananas…the best of Japanese street food can always be found during festivals.

And if you wish to enjoy the festival in the same way Yuzawa inhabitants do, you can rent a yukata. Wandering in the streets wearing a yukata and taking pictures side to side with the edoro lanterns is part of the tradition. It is overall a very sweet and enjoyable festival, but mainly a very beautiful one. A great opportunity to create wonderful memories in the North of Japan.