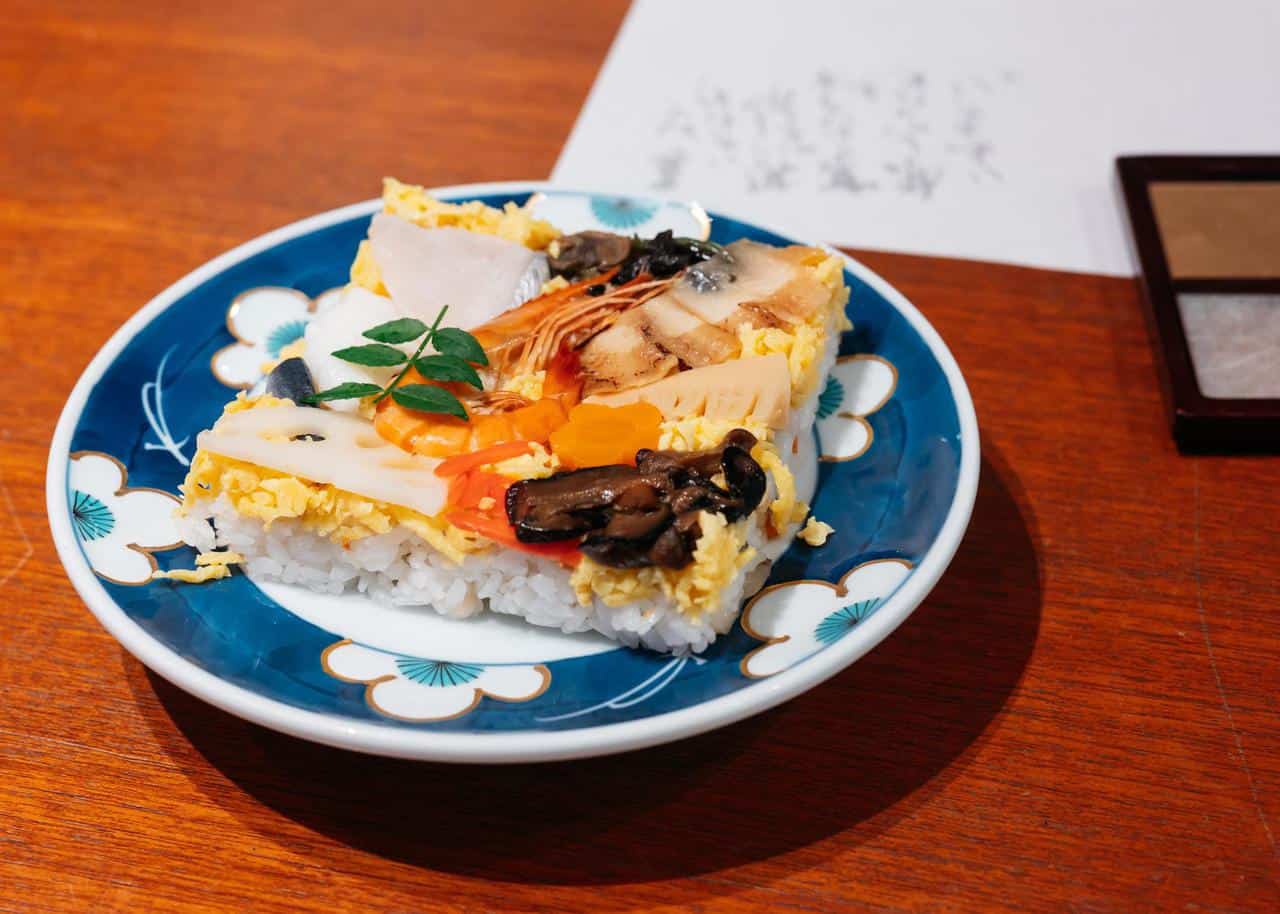 The History and Culture of Okayama Through Sushi

The tip of his knife sliced through the cucumber, first in a half dozen vertical strokes, then turning the knife on its side, a smooth horizontal stroke, fanning the slices into tiny branches resembling leaves. In the first five minutes of his demonstration Namba-san created the representation of the three auspicious plants of Japanese traditional design: pine, bamboo and plum, from a single cucumber.

Namba-san, Chairman of the Okayama City restaurant Kidoairaku, may be an accomplished sushi chef, but he flashes his winning smile more frequently than his knife. His passion for sharing the nuances of Japanese culture through one of its most famous foods, sushi, led him to offer a sushi making experience at his fine restaurant.

Surrounded by diners enjoying lunch and conversation, we stood around a table in the middle of the restaurant as Namba-san revealed the secrets of making the perfect nigiri sushi. Cradling an oblong ball of vinegar seasoned rice in one hand, he explained the “float”, an indentation made with the thumb in the bottom of the rice so that the entire bottom of the nigiri is not in contact with the surface of the wooden plate. The float keeps the rice from becoming hard if it sits for a while, thereby keeping the nigiri fresher longer.

I should note here that because I couldn’t make sushi and take photos at the same time, one of my hosts from Okayama City was kind enough to step in as a subject. But Namba-san generously allowed me to experience it for myself later, off-camera!

The skill of the sushi chef, according to Namba-san, is partly judged on the speed and precision he or she can get the finished product down on the plate. The less contact the fish has with the warmth of your skin, the better the taste. But the logistics of making the nigiri is only one dimension of a skilled chef. There is also presentation, which Namba-san demonstrated by creating sushi in the shape of various flowers. The other critical skill a chef needs to master is the art of hospitality.

If you’ve ever watched the documentary, “Jiro Dreams of Sushi”, you may have an idea of the breadth and depth of Japanese hospitality at the sushi counter. For example, the chef might bring out a selection of fresh fish and ask the customer which pieces they prefer. Or they might note whether the customer is left or right handed and place the nigiri to make it easier for the customer to pick up.

After completing our lesson on making nigiri sushi, Namba-san began a history lesson on the origin of the famous Okayama sushi dish known as barazushi. This dish was born out of defiance against the Lord of Okayama, Ikeda Mitsumasa, who created a decree that citizens of Okayama should only eat “one soup, one side dish” per meal for the purpose of frugality.

The ingenious people of Okayama created a way to deceive the officials who would occasionally stop people on the street to inspect their meal boxes; rather than top their rice with extravagant toppings of seafood and vegetables, they put those items on the bottom, under the rice. After reaching their destination, they simply flipped the box over onto a plate, revealing a feast for the eyes as well as the stomach.

The delicious barazushi at Kidoairaku consists of several types of seafood including anago (salt water eel), aji (mackerel), ebi (shrimp), and salmon, as well as lotus root, and various pickled vegetables. The empty spaces are filled with shredded egg and the whole layer is finally covered with vinegar seasoned rice. Together with the nigiri we had made earlier, a plate of lightly battered tempura and a bowl of miso soup rounded out a very filling meal.

Before departing for his next appointment, Namba-san presented me with a certificate stating I had completed the experience of learning to make nigiri and barazushi, a wonderful souvenir to show to my friends when preparing them perfectly formed nigiri with warm Japanese hospitality.