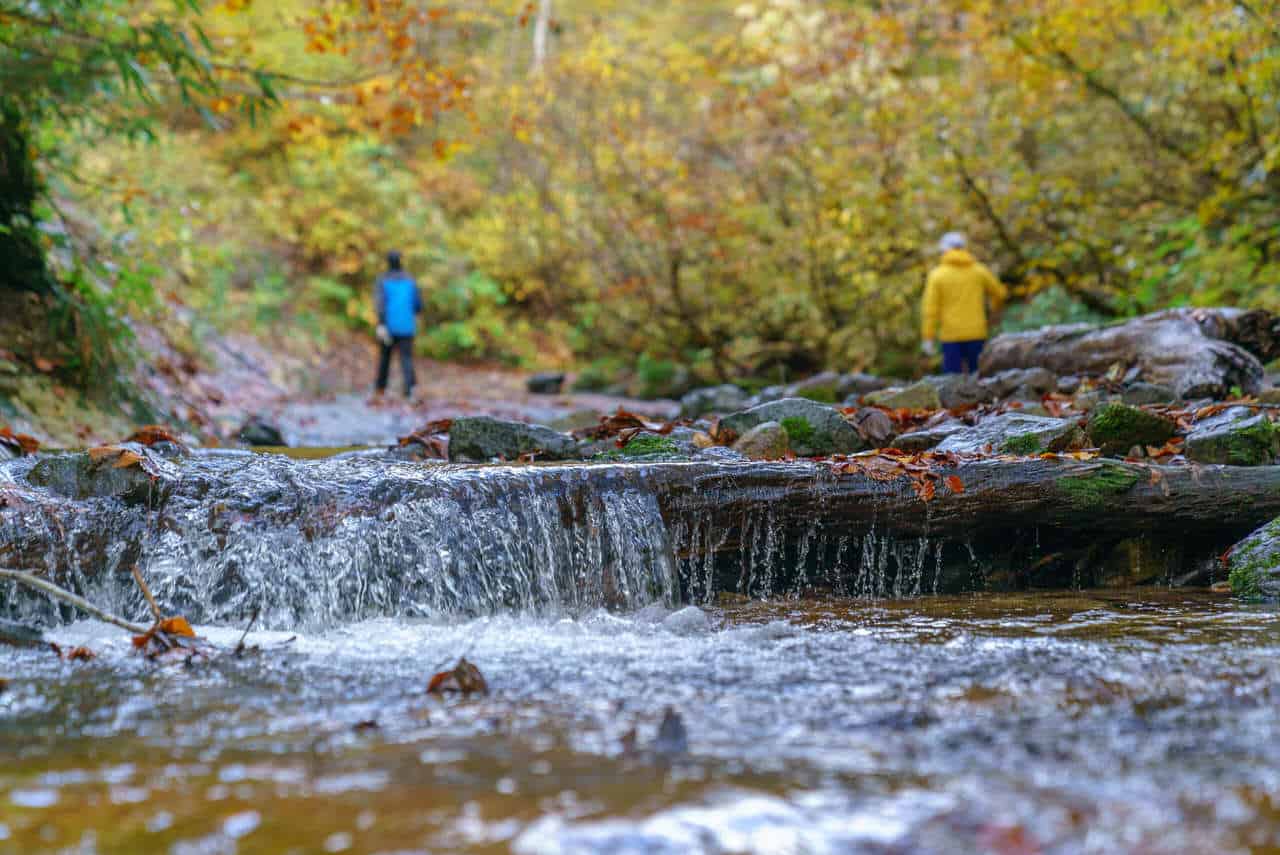 Shirakami-Sanchi tour guide, Yukio Koike, moved to Aomori Prefecture 33 years ago to study Environmental Science at Hirosaki University. The Kanagawa native’s intention for traveling so far north was initially to go skiing during his time off. But, unbeknownst to him at the time, he would fall in love with the mountainous Shirakami-Sanchi and the ways of the Matagi, a unique group of traditional winter hunters of the region.

The World Heritage Site Shirakami-Sanchi is the largest pristine beech forest in East Asia, with a diverse ecosystem that has remained relatively untouched over the last 8,000 years. After a chance encounter with the Matagi, Koike-san became fascinated with the culture and decided to become a disciple of Matagi himself. “He showed me how to catch a fish with his bare hands and start a fire in the pouring rain. That’s when I first thought, Wow, the Matagi are amazing.”

Who are the Matagi?

The term Matagi (マタギ) came into use in Japan around 500 years ago for the community of hunter-gathers that spread from northern Tohoku to the northern parts of central Japan, who followed strict lifestyle rules. They lived in the style of the people of the Jomon Era (ca. 10,500–ca. 300 B.C.), where they hunted animals, gathered wild plants and mushrooms, and lived off the land.

The Matagi of Shirakami lived here in tandem with the Ainu, the indigenous people of northern Japan with traces of Ainu culture and language is still found today. Being Matagi is a way of life and a belief system — One must not traverse the forests whistling or singing for fear of upsetting the mountain gods. Fire and water are divine, and stream waters used to wash rice must be emptied further up in the mountains so that the river and woods remain unpolluted.

The Matagi abide by a strict set of rules. For example, the traditional bear hunting period lasts only two weeks. When they harvest wild vegetation, such as mizu, they would only take 30% and leave the rest to recover for the following year.

Around the middle of the last century, the lifestyle of the Matagi fundamentally changed. Younger Matagi had begun to eschew the lifestyle and moved to larger cities to work in mines or at dam constructions. Unable to source an income by traditional means, the Matagi started to get jobs in the forestry sector.

In 1993, the Shirakami Sanchi area became a World Heritage Site, and the Matagi once again found a way to sustain themselves in harmony with the forest — by working as tour guides and teaching people about Matagi culture and values.

If you are looking to connect with the Matagi culture, Matagi Tours is your best option. Koike-san and the other guides of Shirakami Matagisha customize tours with activities such as collecting mushrooms and wild vegetation for dinner, staying overnight in a Matagi-style log cabin, building bonfires, and trekking through Shirakami Sanchi’s vast forests and waterfalls visits.

For our short trek, Koike-san suggested we walk along a secluded stream to learn about the local wild vegetation. The rock surface can be pretty slippery, so we donned a pair of traditional split-toed tabi boots with soles covered with sharp nails to help navigate the streams with ease.

The tours run year-round except for a short period in the middle of winter when the area is inaccessible due to three to four meters of snow. You can book a Matagi tour or a wide variety of other experiences via the Shirakami Calendar website (Japanese only).

The Shirakami Sanchi Visitor Center educates visitors about the region’s history, the forest’s diversity, and Matagi life, showing the tools they crafted and used (with detailed descriptions in English and Japanese) and how they adapted to different seasons, with interactive exhibits to keep the kids entertained.

Known as the winter hunters of Japan, the Matagi would catch rabbits and Japanese serow (now a protected species) in the winter. Once a year, the Matagi will hunt a bear as a part of their spiritual bond with the land.

If you feel adventurous, you can try the bear meat rice bowl for lunch at the Rest Stop “Tsugaru Shirakami” Beech Nishimeya just across the road from the Shirakami Sanchi Visitor Center.

The Nishimeya Village of Shirakami Sanchi is accessible via train and bus or by car. If you are traveling by shinkansen from Tokyo, transfer at Shin-Aomori Station to the local Ou Line train and get off at Hirosaki Station. You can then get a bus to Nishimeya Village, which will take around 50 minutes. If you are traveling by car, Nishimeya is a scenic 1.5-hour drive from Aomori City or a thirty-minute drive from Hirosaki City.

A tour with the traditional Matagi hunters and gathers is just one of the many unique experiences awaiting you to visit the Shirakami Sanchi region. If you plan on visiting the Aomori region for the Aomori Nebuta Festival or the famous cobalt blue Aoike Pond, a tour with the Matagi is a must-visit on your list.