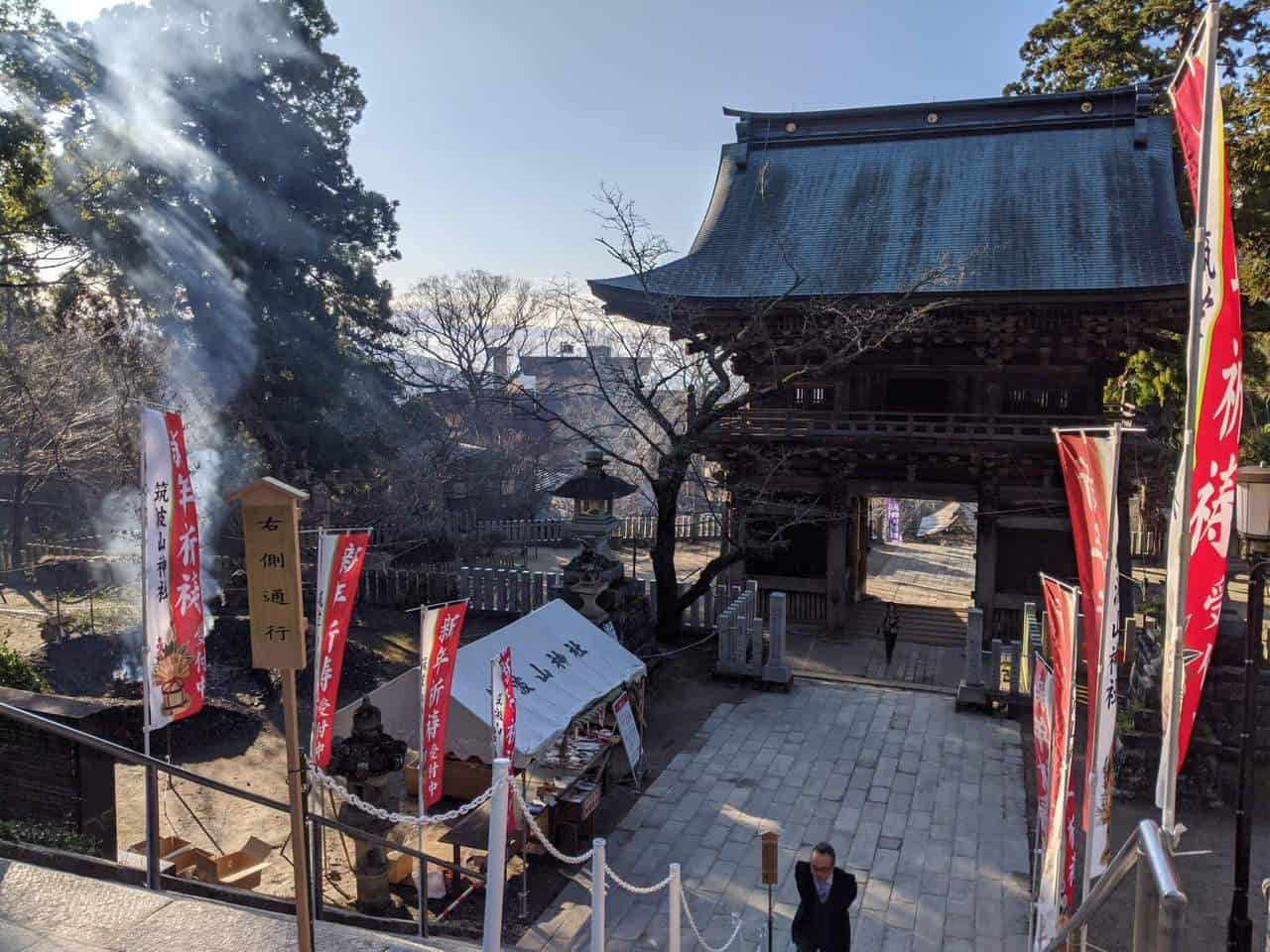 In the Foothills of Lovers: A Journey to Mt. Tsukuba

“Fuji in the West, Tsukuba in the East.” This is the phrase used to describe the importance of Mt. Tsukuba to Japan. Located in Ibaraki prefecture north of Tokyo, a beautiful, natural region, Mt. Tsukuba and its two peaks are said to be composed of lovers. Travelers visit Mt. Tsukuba not just to hike or trek, or enjoy the changing of the seasons through Ibaraki, but to make a pilgrimage to a sacred place and ask for the blessing of the mountain in their quest for a soulmate.

Hot Springs and Lavish Food in a Cozy Ryokan

My journey to Mt. Tsukuba was simple because I came by car, although there are plenty of shuttle buses from nearby train stations to take tourists to the mountain’s town at its base. For those who don’t want to, or can’t make the hike up the mountain, there are also ropeways that travel to the peak. By car, I traveled up the roads that snaked past small shops along the mountain’s foothills and directly to my destination for the evening: Tsukubasan Edoya.

Tsukubasan Edoya 筑波山江戸屋 is an over 300-year old ryokan (Japanese-style hotel) in the foothills of Mt. Tsukuba. Ryokan differ from regular hotels largely because of their onsen (hot spring baths), which are open to all guests to use. Onsen across Japan often receive their steaming hot water directly from mountainside hot springs. Tsukubasan Edoya has a lovely bathing facility available for its guests, and of course complimentary bathrobes, towels, bags for carrying your shower supplies, soap, etc. If you’re uncomfortable bathing in front of others, you can always go late (after 9pm or so), and it’s more likely that the baths will be empty or nearly empty. It’s important to note that ryokan like this often don’t have bathing facilities in your room, so the onsen is your only place to get clean.

I arrived at Tsukubasan Edoya and was greeted at the front desk, given my room key, and told about the policies of the ryokan. Ryokan often include breakfast and dinner, but meals are served at set times (another feature of ryokan), so I had to decide when I wanted to eat within specific windows of time. At the door, I was given a number for my shoes in case I wanted to leave the ryokan. I also had the chance to check out the gift shop in the lobby, and a spacious seating area perfect for reading next to a set of wide, glass doors that let in plenty of sunlight.

My room, on the fourth floor, was a traditional tatami room with a tea set and kettle available and ready for making green tea. I made some tea and called the front desk to ask them to put out my futon (a traditional bedding set that goes on the floor). Then I got washed up a bit (there are sinks in the rooms), changed into my yukata (traditional robe-like clothing for men or women), and went to dinner.

Dinner was on another floor, and after being greeted very graciously by the wait staff, I was shown to a private tatami room where my meal was already waiting at a table. A member the of staff came and explained the meal to me – which items go with what, how to dip this in that, what courses were coming, when they will be served, and so on – and then gave me a drink menu and closed the door behind her on the way out. I was left completely to myself, in utter and beautiful silence, to eat, be at rest, and contemplate the food as I ate.

The meal was comprised of a staggeringly beautiful set of tiny dishes that were gourmet variations on Japanese food such as sushi, tempura, tofu dishes, nabe (hot pot), pickles, vegetable dishes, and dessert. It came with a complimentary glass of umeshu (plum wine), and I had the option to order additional drinks like sake. Naturally, I decided to take advantage of the opportunity and ordered a flight of different types of sake perfect for cleansing the palate and staying warm.

After dinner, I went to the onsen and because it was a little later than peak hours, I had the entire place to myself. I stayed as long as I could, nearly until the onsen closes at 10:00 pm, before drying and heading back to my room to pass out on my futon.

The following morning I got up rather early, donned my yukata again, and went to breakfast. Unlike dinner, breakfast was served in a banquet hall on a different floor. Breakfast was arrayed much like dinner, all tiny dishes to experiment with, and I also had miso soup and as much rice as I wanted. There were fixings on a separate table to make neba-neba don, which is a combination of natto (fermented soybeans), okra, raw eggs, spring onions, and soy sauce all mixed together and eaten with a bowl of rice. It’s somewhat of a brave choice for a tourist visiting Japan for the first time, but it should definitely be tried at least once. Having gotten used to this kind of dish a while ago, I made a bowl for myself and enjoyed it with breakfast.

During my time spent at Tsukubasan Edoya, the staff were exceptionally courteous, well-mannered, and helpful. This made the entire experience easy, wonderful, and memorable. The ryokan’s location right at the base of Mt. Tsukuba is unparalleled and makes any trip that much easier to enjoy and get around.

The Blessing of the Gods at Tsukubasan Shrine

After breakfast at Tsukubasan Edoya, I headed out to visit Tsukubasan Shrine 筑波山 which was built on a holy site that has stood in the same location for nearly 3000 years. The ryokan is not only located at the base of Mt. Tsukuba, but directly next to Tsukubasan Shrine. It’s not an exaggeration to say that I stepped out of the front door of the ryokan and after ten steps I reached the stairs leading to the shrine.

Even by the time I arrived a little after 8:00 in the morning there were already a fair amount of hikers and trekkers making their way to the shrine. It wasn’t crowded by any means, but it was very easy to tell how busy the place would eventually get. At that time in the morning, souvenir shops around the shrine were just starting to open, maintenance staff were cleaning, and the air was beautifully bright and crisp. It is this level of care that lends to the impression that you are standing in a sacred place.

There’s a bridge at the lowest part of the shrine that leads to an entrance gate, followed by a flight of steps that lead up the central shrine itself. There are watchful guardian statues at each junction and smaller shrines aside the main shrine. As usual, there is a rack for visitors to tie a piece of paper to in order to bind their problems to the shrine. All in all, Tsukubasan Shrine is meticulously cared for and gorgeously arranged.

I went up to the main shrine, tossed a coin into the offering tray, made a wish, did the usual 2 claps, 2 bows, 1 clap in Shinto fashion, then smiled on my way out and down the steps back to the ryokan to check out and continue my journeys.

In the end, my journey to Mt. Tsukuba and Tsukubasan Edoya was as rejuvenating as it was rewarding. I visited an often-overlooked, truly special place that was all the more rich for its comparison to a mythic summit like Mt. Fuji, and went up a less-traveled path to the coziness of a 300-year old ryokan to sleep in the shadow of a mountain far, far older.

How to Get to Mt. Tsukuba

Akihabara station – Tsukuba station (Tsukuba Express): about 45 minutes
and then take the Shuttle bus, about 40 minutes.