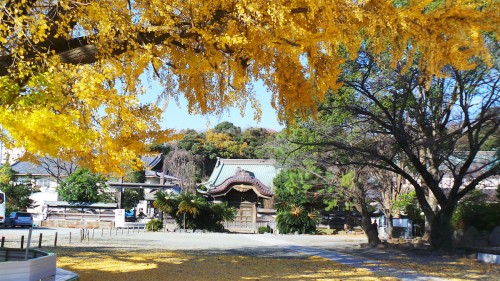 Yugyo-ji temple (also known as “Shōjōkō-ji temple”) is a very interesting historical place located in Fujisawa, a city you can easily reach by train from Tokyo, so come off the beaten path pay it a visit! It’s a godsend for curious travelers looking for peace and serenity!

Yugyo-ji temple (also known as “Shōjōkō-ji temple”) is a very interesting place located in Fujisawa, a city you can easily reach by train from Tokyo. Despite its historical importance, this temple comes off the beaten path since it is very little visited! It’s a godsend for curious travelers looking for peace and serenity!

With its several buildings, this temple is the general headquarters of the Ji Sect, an offshoot of Pure Land Buddhism which has over 400 temples and 350,000 followers.

The temple was founded in 1325 by the fourth Patriarch Ta-A Donkai from Matano clan.

Since its foundation, the temples buildings have been often burnt down by fire caused by war or accidents, and reconstructed on every occasion. When the entire temple was destroyed by fire in 1513, the principal deity was moved to Chōzen-ji Temple in Suruga. It was not reconstructed until 1607. 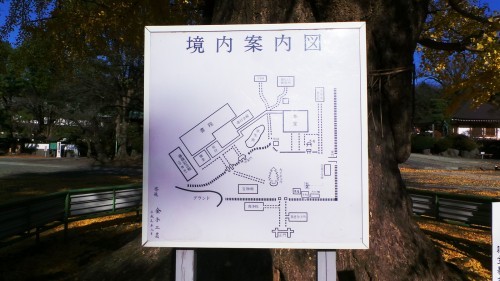 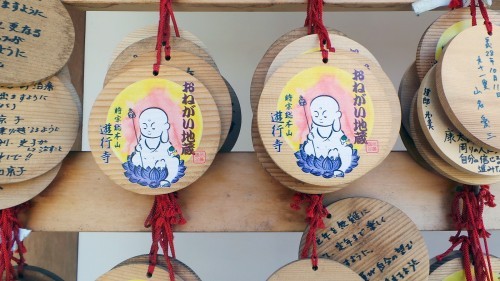 The different parts of the temple

The main entrance to the temple is the gate called “kabuki” because it has two pillars connected with a horizontal beam (and also called “Kuro-mon” or Black Gate because it is painted in black). It used to be a four-legged gate before it was burned down in the Meiji period. 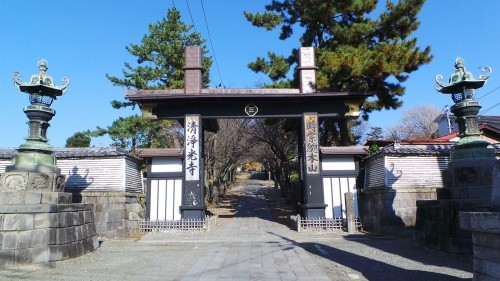 Behind the gate, the Iroha-zaka slope and its 48 steps symbolizing the number of the vows of Amitābha, the Buddha venerated by the “Ji” sect. It is intended that the visitors going up the steps will think deeply of these vows. 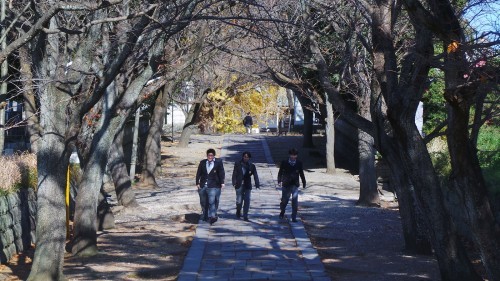 At the end of the slope, you will find Ōichō, a large and beautiful ginkgo tree with yellow leaves estimated to be 700 years old. Visitors are often resting in the shade of its leaves. 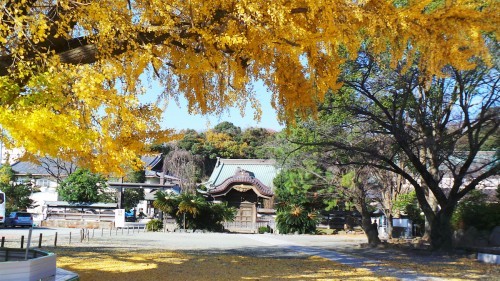 Hondō of Yugyō-ji is one of the largest wooden main halls of all Buddhist temples in Tōkaidō area. It was re-built in 1937 with wood and a copper roofing. Take a look inside: you will find the prayer room lavishly ornamented! 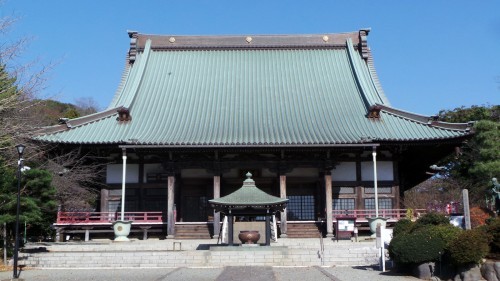 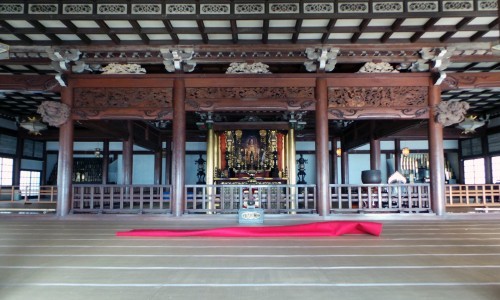 On the right-hand side of the main hall, you will find this statue of Ippen Shōnin (1239-1289), a saint monk (“Shōnin” means “Saint” in Japanese) regarded as the founder of the Ji Sect. 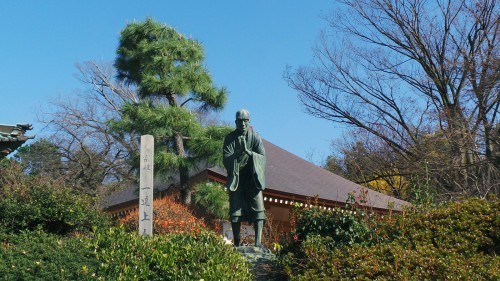 Built in 1859, this gate is the oldest wooden building in the precinct. It has a chrysanthemum crest on the main ridge of the roof, which indicate a relation with the Imperial family, and a trefoil hollyhock crest under the roof, which is the crest of Tokugawa family. Until today, it has been used as the main gate of the temple. 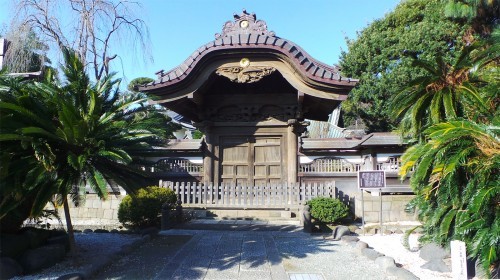 Behind the Chūjaku-mon gate, there is the Gobankata, the official building of the temple, where you can meet the monks. It used as the official entrance hall. It collapsed in the Great Kanto Earthquake of 1923 and was rebuilt afterward.

Behind the Chūjaku-mon gate, there is the Gobankata, the official building of the temple, where you can meet the monks. It is used as the official entrance hall. It collapsed in the Great Kanto Earthquake of 1923 and was rebuilt afterward. 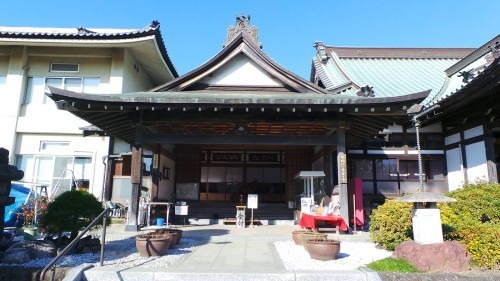 To the left of the main hall, a path lead to the annexed buildings of the temple. Following the path, you will see a nice pond, a beautiful Japanese garden and a rustic cemetery. 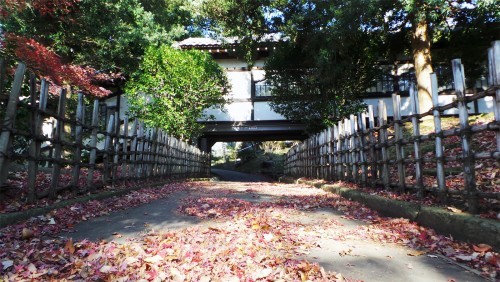 You will not find many koi carps in this pond! The golden fish were all released in 1687, when the “Shōrui Awaremi no Rē” (ordinances concerning compassion for all living creatures) was issued. “Hōjō-ike” (the ceremony of releasing captive animals) is held on occasion of “Shunki Kaisan-ki” (Spring Memorial Ceremony of Temple’s Founder). In 1966, a statue of Kanzeon Bosatsu was erected on the shore of the pond. 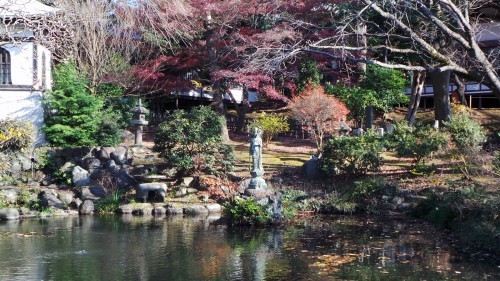 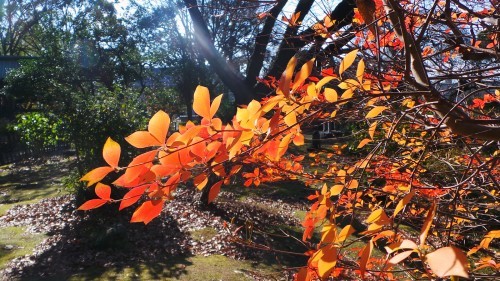 I was amazed to find those bloomed flowers (I think they are camellias)! 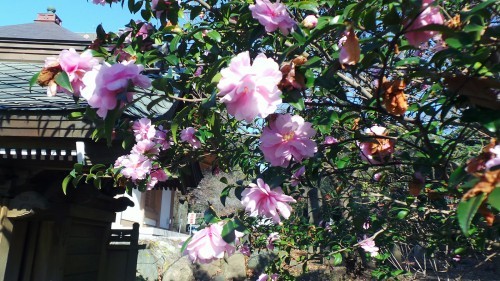 During the Edo period, the building located near the entrance of the temple was an accommodation for travelers along the Tōkaidō road. Today, you will find it a small museum and some meeting rooms. You can have a look, it’s free! More information on their website (in Japanese). 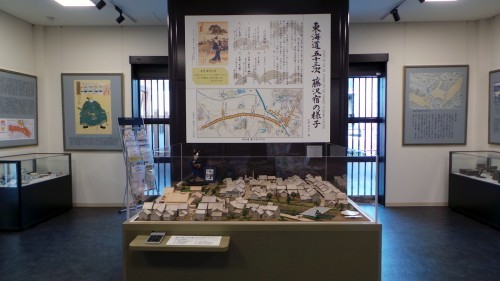 You can reach the temple from Fujisawa station with a 15-20 minute walk. If you come up from the Fujisawa Ukiyo-e Museum, you can take bus 10 from Kamidai Koenmae station (神台公園前) (in front of the museum) to Yugyōji mae station (遊行寺前) before the temple.

To get to the temple, you have to cross the Yugyo-ji bridge: 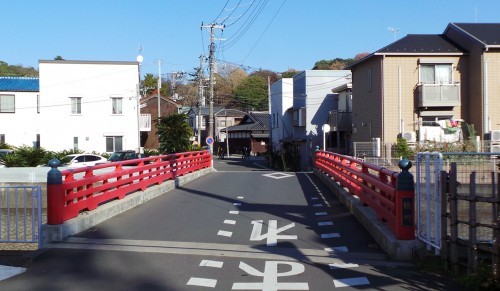 It is the same bridge you can find on this ukiyo-e of “The Fifty-Three Stations of the Tōkaidō!” (6th post station): 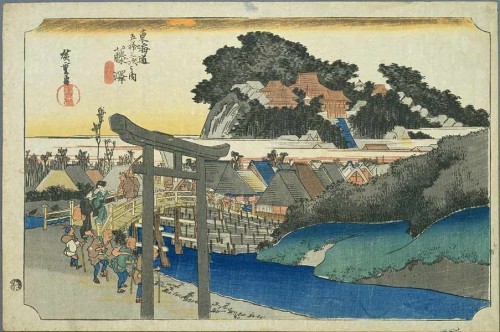 Another version of the 6th station in Fujisawa. You can see the Yugyo-ji bridge which still exists in Fujisawa today. Artist: Utagawa Hiroshige.