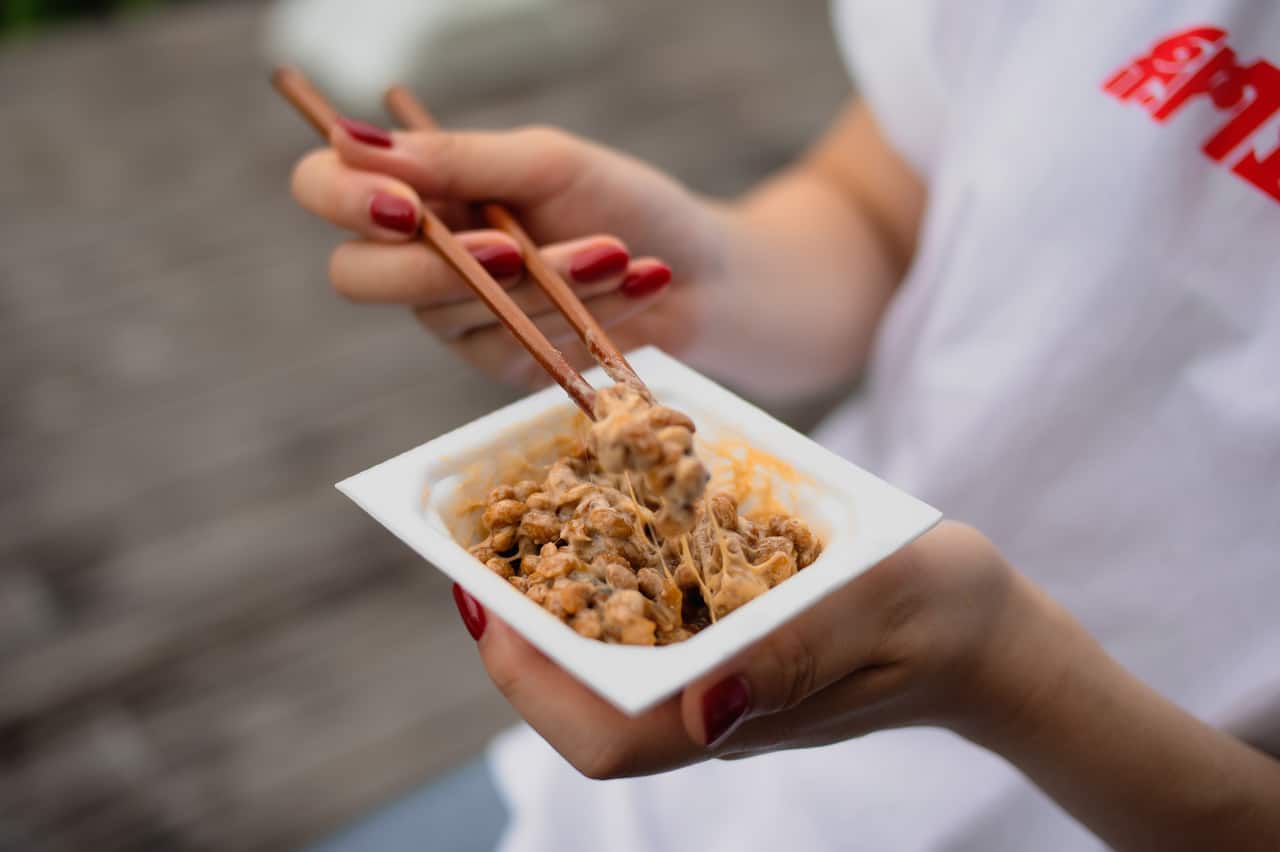 While Japan is a food lover’s paradise, there is no universal agreement on what foods people will eat. Some visitors to Japan gasp in horror at the thought of eating raw seafood, various grilled chicken parts, or even things as innocuous as pickled vegetables. But it seems no Japanese food riles up people’s emotions quite like natto 納豆, the smelly, slimy, fermented beans that are a staple of Japanese breakfast. In an unofficial poll of my non-Japanese friends, it is one food that people universally turn up their noses at, and quite literally. Yet, one brave young woman is on a mission to change that.

Suzuki Mayuko had a premonition of what she wanted to be in life from her earliest childhood memories. She recalls her grandfather creating makizushi (sushi rolls) containing natto for her cousins and her younger sister. As Mayuko waited patiently to receive her natto roll, she remembers how her excitement would build until she could hardly stand it. It wasn’t until many years later, while working as an intern at a food venture company, that she realized her passion. After being asked what her favorite food was, she realized how she wanted to share her love of natto with more people. She began to create events and social media to promote natto as a food, which, in her opinion, is both nutritious and delicious. Today, she has added to her natto resume as a writer for a prestigious Japanese magazine (Hanako) and a purveyor of natto-related goods in her eCommerce shop, Natto Tengoku (Natto Heaven).

Simply put, natto is made from soybeans fermented using the Bacillus natto bacteria. While it ranks near the top of the list of healthy Japanese foods, it ranks completely opposite in terms of appeal. During the fermentation, the beans acquire a slimy texture and a strong taste and odor that is often unpleasant to those who are not used to it. Even in Japan, it is usually consumed with a bowl of rice and seasoned with mustard or soy sauce to improve the flavor.

You’ll most likely encounter natto during your visit to Japan if you opt to eat a Japanese-style breakfast, often at a ryokan or farm stay. However, it usually comes sealed in a container as not to offend your sense of smell. Nobody in Japan will be offended if you pass on it, and in some cases, you may be asked explicitly if you want it or not before your meal even arrives.

The Health Benefits of Eating Natto

As a person who consumes 3 to 5 packs of natto per day and promotes natto as a full-time job, Mayuko could have easily crowned herself the “Natto Queen.” Instead, she chose the moniker “Natto Musume,” which roughly translates to just an ordinary girl who loves natto. As she explained it, she intended to be friendly and approachable when it comes to questions about natto, and the name was an essential part of that persona. Mayuko posts reviews of different types of natto from all over Japan and simple recipes that include natto as an ingredient to her thousands of followers on social media. She admits that not everyone who follows is a natto lover, but some just want to encourage her as an individual following her passion in life. And that’s fine because if she can convince them to try natto, it’s a win for her.

The first time I met Mayuko, I boldly proclaimed my dislike for natto to her, a reaction she met with a good-natured laugh. She realizes natto is not to everyone’s taste, but the value of natto as a superfood that can be made easily even in the poorest of countries is something that cannot be ignored. In areas where health issues caused by poor food quality are common, natto could literally be a lifesaver as an immunity booster and a reducer of heart disease.

The health benefits of eating natto are widely documented. They include lower cholesterol, lower blood pressure, reduced risks of blood clots, and large quantities of vitamin K2, which is linked to reduced heart disease. Moreover, because it contains probiotics, natto is also believed to strengthen your immune system. The fiber of the beans also aids in a healthy digestive system. Mayuko suggests that even people who don’t like the taste of natto should find ways to consume it in dishes that mask the intense flavor for its health benefits alone. She is currently working with a major university in Osaka to produce vegan natto chocolate using freeze-dried natto that she claims tastes like nuts.

Can a non-Japanese Person Learn to Love Natto?

I challenged Mayuko to find a way to make natto palatable for a person like me. She responded by inviting me to a natto party the following day. At the party, I sampled different types of natto as well as dishes Mayuko prepared with natto. She prepared two types of pasta with natto and poke like dish with soy sauce marinated maguro (raw tuna) and natto over rice. If I have to be completely honest, I didn’t love any of the dishes I tried, as lacking other strong-flavored ingredients, the overpowering flavor of the natto was still detectable. I’m also not fond of the slimy texture of natto, and that too was evident in the dishes she created that day. Mayuko suggested that diced natto mixed into curry is a great method for completely masking the natto flavor and texture. It is also possible to rinse the sliminess off of the beans with water. However, you will inevitably lose some of the nutritional value this way.

Because I wasn’t thrilled with the soybean-based natto prepared for the party, Mayuko went to her “natto cellar,” also known as the freezer, to fetch me something she thought I would like better. This was Tsuyudaku Wasabi natto つゆだくわさび納豆, made from black beans rather than soybeans, which had a milder flavor and aroma. This natto also comes with a small package of wasabi paste which is mixed into it that masks the flavor. Although she told me I could just sample it if I didn’t like the taste, I willingly ate more than a few bites as the wasabi was the dominant flavor, and it was quite pleasant.

Having carved out her place in the Japanese-speaking world to share her love of natto, Mayuko is now interested in learning English for the purpose of sharing natto with the world. While most non-Japanese people would agree she has her work cut out for her, the fact remains that she got the most stalwart anti-natto person I know to admit that natto can actually be edible: me.

With thanks to Yuki Yoshida @yuki_avocado for the impromptu interpretation for Mayuko and me.

Local Gastronomy in the “Satoyama” of Hida Takayama