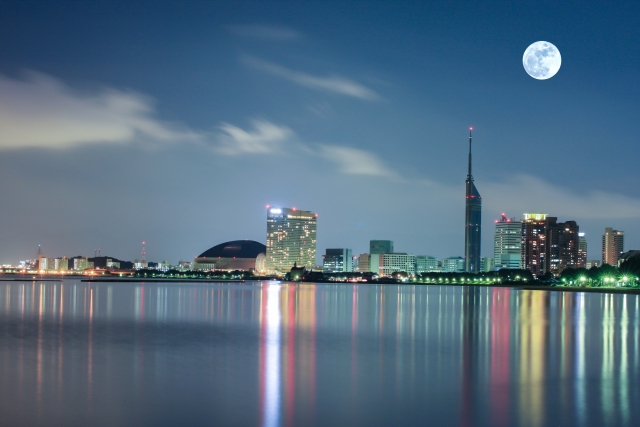 What makes Fukuoka City so attractive?

Sponsored by  THE BANK OF FUKUOKA, LTD

Fukuoka City is a popular destination for tourists, as well as being a popular place live. Recently it was ranked the 7th most liveable city in the world in a survey by Monocle. So what is it about Fukuoka that makes it so attractive? 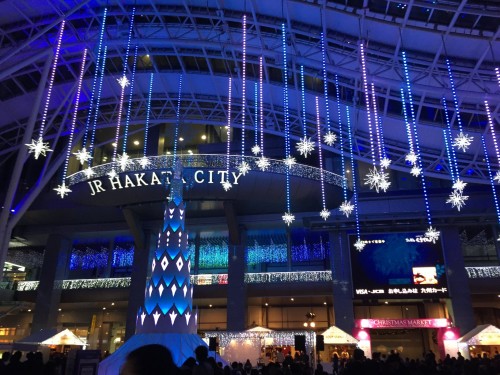 One thing many people have said about Fukuoka City is that it has all the convenience of the city, but with a friendly and fun atmosphere. It isn’t too big or small, as well as not being as crowded as bigger cities like Tokyo. If you visit Fukuoka City you’ll find plenty to see and do, from modern shopping centres to traditional sites. As well as being a fantastic place to go shopping and eat out, the city is also close to the sea and countryside. Fukuoka City really has the best of both worlds! 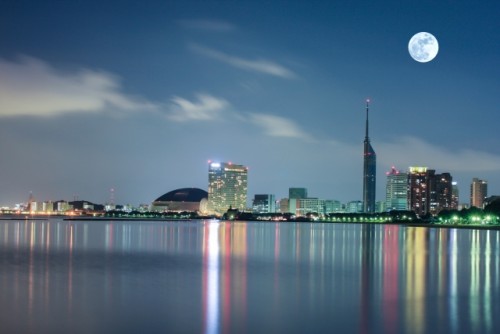 A view of Fukuoka Tower from Momochihama Seaside Park 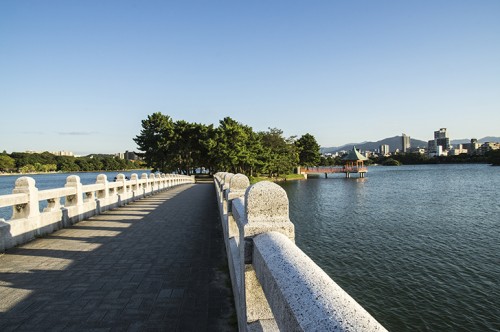 Fukuoka is well known for its local cuisine, popular among local people as well as visitors to the city. One of the most popular is tonkotsu ramen – made with pork broth. There are plenty of ramen shops around the city, most where you order on a ticket vending machine. These only accept cash, so make sure you have some on hand! In different areas of the city you can try some variations of tonkotsu ramen, like Hakata Ramen and Nagahama Ramen. Explore a bit and sample some of the options!

A great place to try ramen as well as many other local specialities is at “yatai” – or food stalls. Fukuoka has many yatai compared to other cities in Japan, where they are rare. In particular, plenty of these stalls open by night in the Nakasu area. They have a friendly atmosphere and are a great way to experience Fukuoka’s local culture. They are enjoyed by people of all ages and you can chat to them and maybe make a new friend! 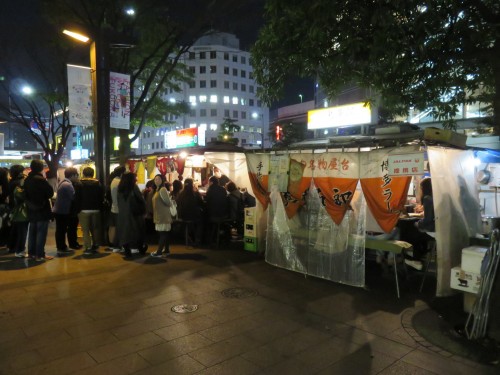 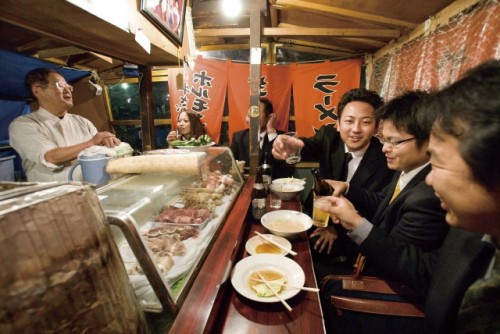 Yatai food stand  ※Provided by the City of Fukuoka

As well as popular local dishes, Fukuoka also has a wide variety of restaurants with all kinds of food from Japan and around the world. Fukuoka actually has one of the highest concentrations of restaurants in Japan. You can find anything to eat, whatever you are in the mood for. 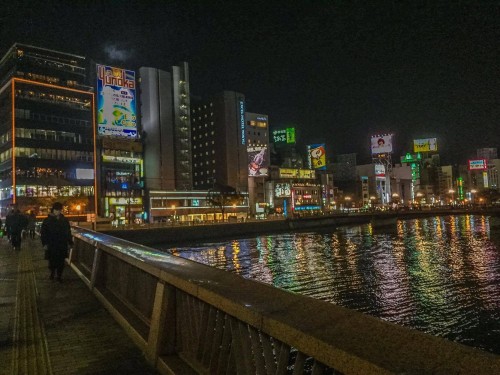 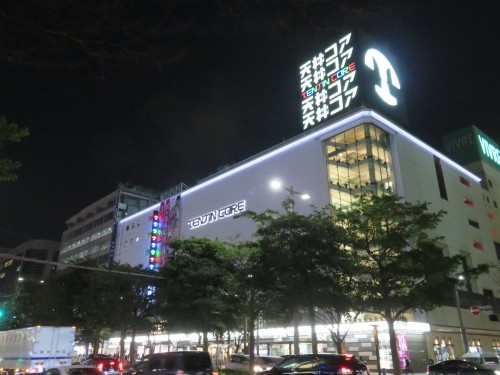 For shopping you are also spoiled for choice in Fukuoka! Hakata and Tenjin have some large malls with great selections, while you can also visit some local shops in areas like the Kamikawabata Shopping Arcade. There’s a different atmosphere here compared to bigger areas like around Hakata Station. You can experience the local culture a bit more deeply here, as the arcade is also connected to the annual Gion Yamakasa – one of Fukuoka City’s biggest festivals. It’s a great place to pick up some unique souvenirs! Be sure to have some cash for the shops that don’t take credit cards. This shopping arcade isn’t far from Canal City – another fun shopping centre with hourly water shows. 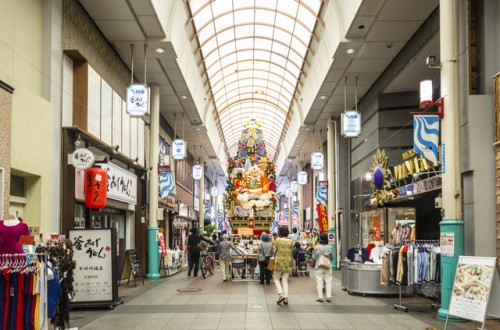 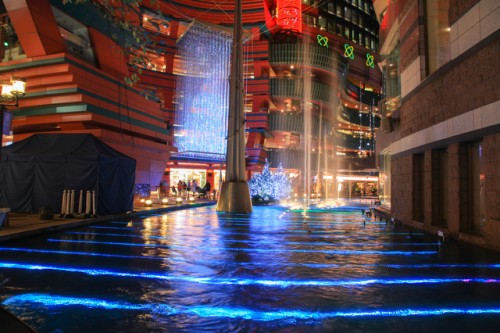 Within this bustling, modern city you can also find some traditional sites like shrines and temples. Some of the most famous are Kushida Shrine and Sumiyoshi Shrine. You can also see some beautiful nature in areas like Nokonoshima island, known for its stunning views of flowers. This is an island just off of Meinohama in the western end of the city. You can get there on the underground then take the ferry to Nokonoshima island. Payment for this is only accepted in cash. One of the less famous temples is Touchouji temple in Hakata. This temple features a large Buddha statue you can go inside, and a stunning five story pagoda. 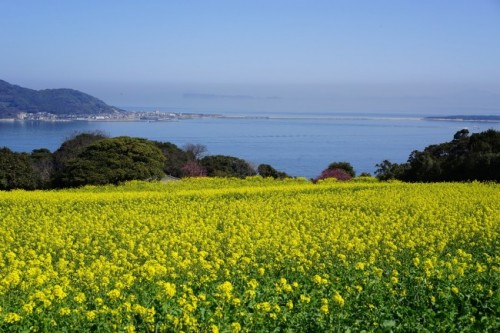 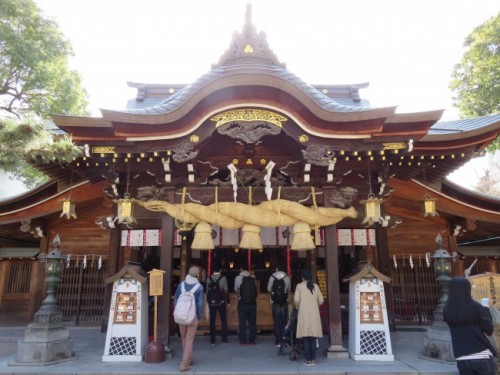 Kushida shrine, at the center of Hakata Gion Yamakasa, is one of Fukuoka’s most beloved shrines 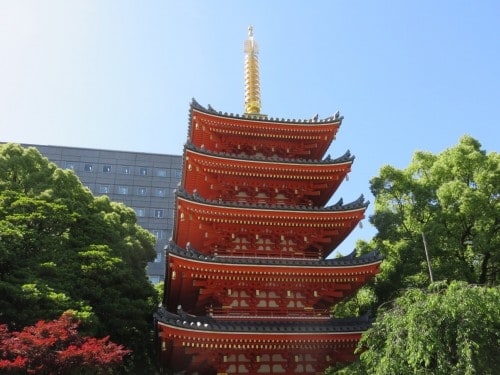 The five story pagoda at Touchouji temple in Hakata

Fukuoka City also has an ideal location, making it very easy to access. From Seoul it takes only 1 hour 20 minutes by plane, which makes it even closer than Tokyo. Fukuoka is also around 1 hour 35 minutes from Shanghai and 3 hours 20 minutes from Hong Kong. There is also a flight running to Fukuoka from Helsinki, which continues until October 2016. Fukuoka Airport is very close to the city centre, taking only 6 minutes on the underground to Hakata Station.

The Fukuoka Underground and Nishitestu Buses and Trains are the most convenient way to get around the city, especially with day pass options for unlimited travel throughout one day. They have comprehensive routes to areas all over the city. Since these are separate lines to the JR Lines, you cannot use a JR Rail Pass here so be sure to have some cash to buy your tickets. Fukuoka Bank’s currency exchange branches are conveniently located in Hakata and Tenjin, as well as in Fukuoka Airport.

Japan is still a cash run society, and big cities like Fukuoka are no exception. To truly experience Fukuoka City with its rich culture and delicious cuisine, make sure to get some cash to use! While bigger stores may accept card payments, places like yatai and shrines will not. Fukuoka has a lot of things to offer and to truly experience this vibrant city, exchange some money and go out and experience it!

Fukuoka Bank has currency exchange offices in convenient locations. They offer several different currencies, including British Pounds, US dollars and Euros, to name a few. Each branch has an easy to use currency exchanging machine as well as a staff run counter, so there is always someone there to help. Branches are open every day including holidays, and are open from 8am to 9pm. (Note: from 9am to 9pm at Tenjin Fukuoka Bank currency exchange. ) 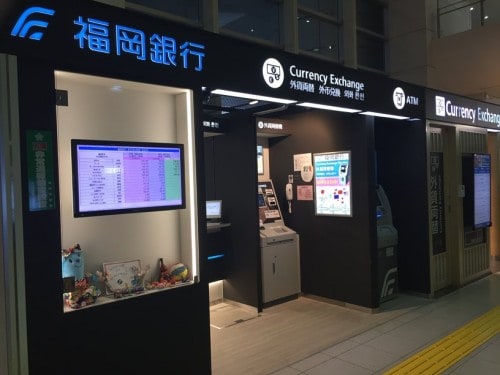 In the international terminal of Fukuoka Airport there are two branches, so you can exchange money when you arrive. If you’re leaving Japan from Fukuoka you can also easily exchange your yen here. 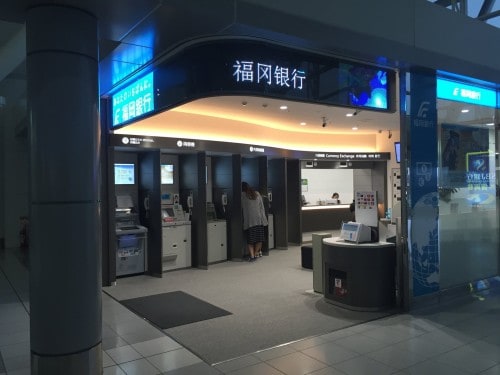 There is another branch in the centre of JR Hakata Station, near where you can also find ticket offices. 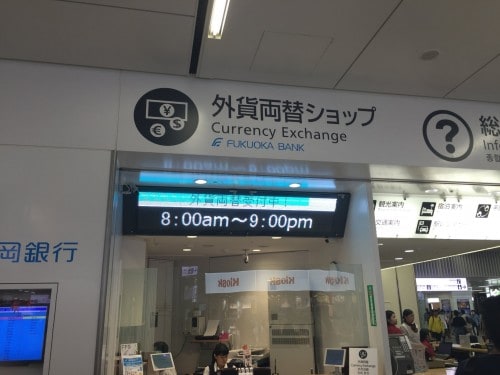 They also have a branch in Tenjin just next to the Nishitetsu Fukuoka(Tenjin) Staton – especially convenient before you take a train or decide to stop by some of the nearby yatais! 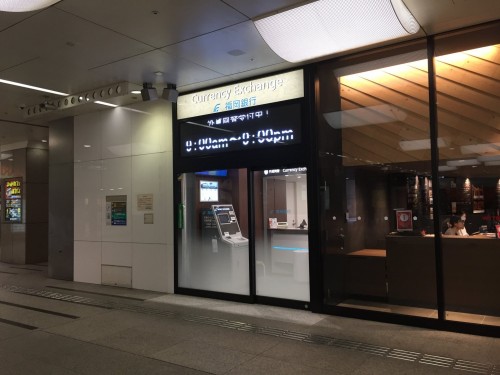 JR Rail Pass holders can also get a discount on some transactions! *Only at JR Hakata station 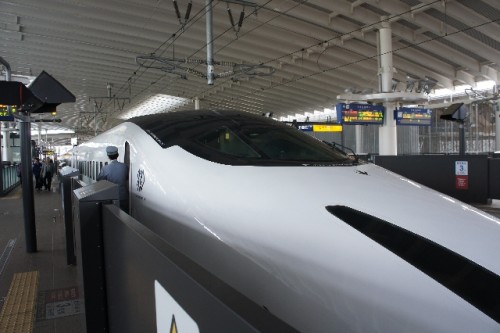