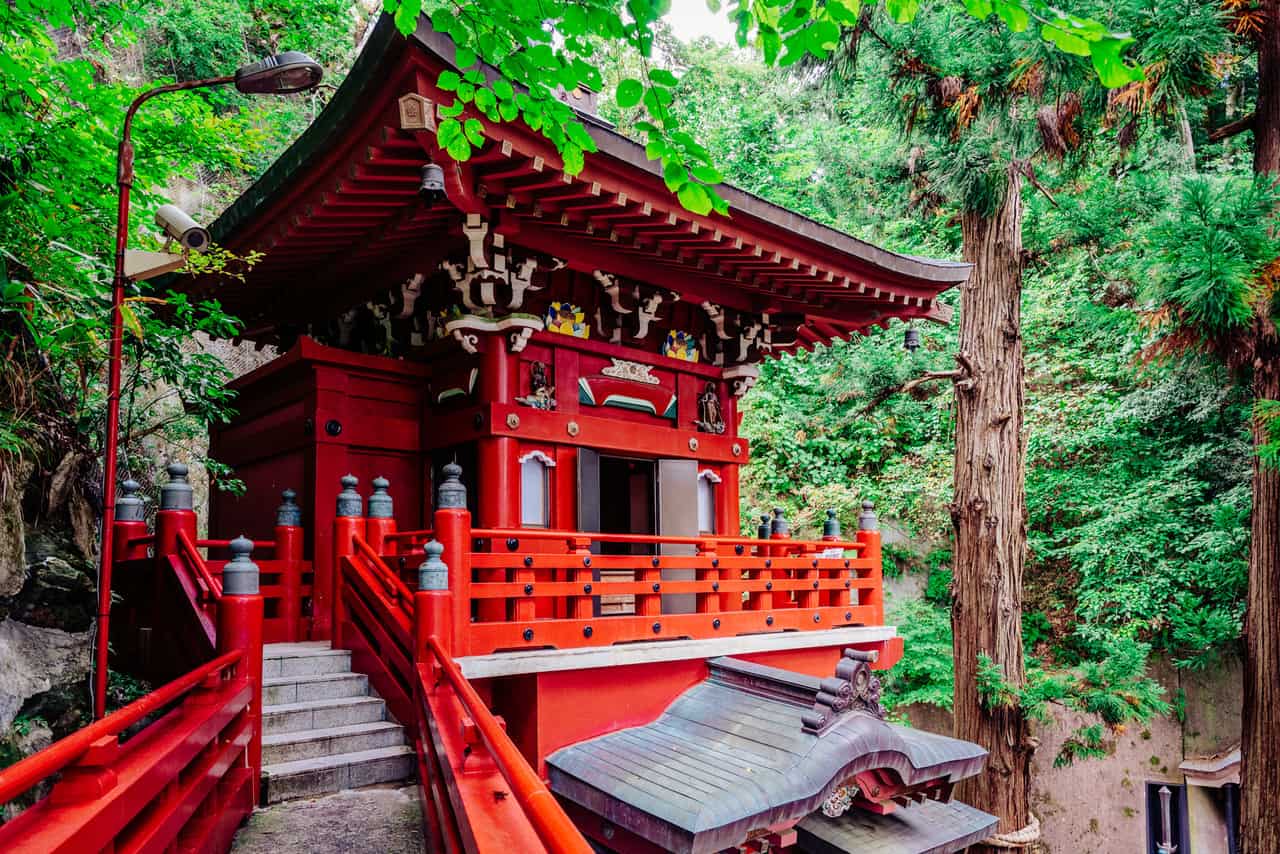 I peered into the darkness beyond the corridor faintly lit by an array of candles, straining to see what lay beyond. To my dread, I could see nothing but the encroaching darkness. If I wanted to know the secrets of Nakano Fudoson’s ancient tunnels, I would have to venture inside myself. 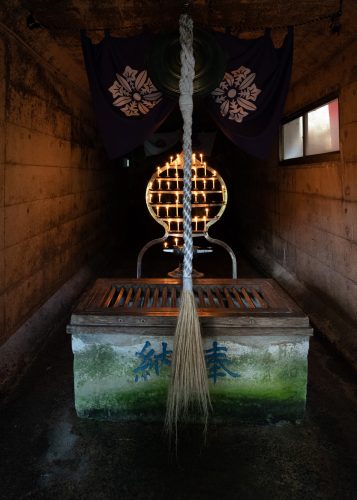 I had come to Nakano Fudoson Temple from a weekend spent in Fukushima City where I attended the Iizaka Kenka Matsuri and stayed at a beautiful historic ryokan called Nakamuraya. I thought Nakamuraya, built over 300 years ago in 1688, was historic. But when Nakamuraya was a brand new building, Nakano Fudoson temple had already existed for over 500 years.

The main temple of Nakano Fudoson sits on the edge of a small valley, probably carved out of the mountain by the constant flow of water which cascades down the hillside behind the building known as Dainichido. The main temple sells an array of charms and wards that are supposed to protect you from bad luck. There is also a special charm you can purchase customized for your future year. Using a computer program, it predicts which part of your body is likely to get injured in the coming year and creates a charm protecting you from such injury. Does it really work? Who knows, but it is much cheaper than health insurance.

The ceiling above the main hall of the temple is decorated with paintings of some rather frightening looking people and non-humans associated with Buddhism. This particular temple is dedicated to Fudo, one of the Buddhist gods responsible for protecting the knowledge of Buddhism. 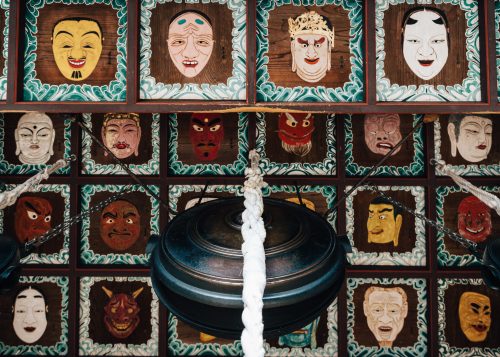 This is the image of the Fudo himself. While he looks frightening and demon-like, he is supposed to be a benevolent deity. Proof that he is not a demon are in his own hands; his left hand holds a cord meant to bind demons and his right wields a sword called “Kurikara,” the Devil Subduer. 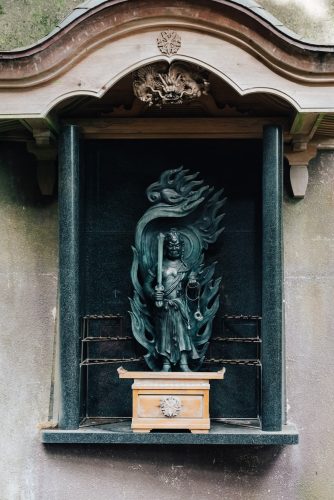 Besides the main temple, there are three other buildings in the valley. The first building at the top of the valley, nestled in the trees, is called Kitoden. It is said that praying at Kitoden will protect your eyes. 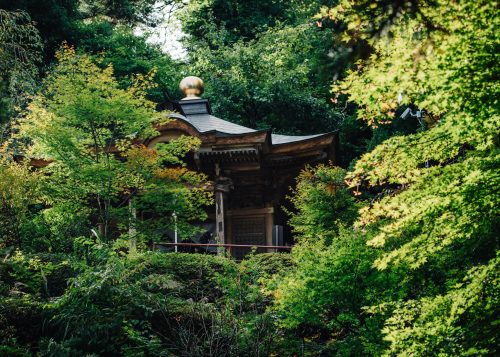 Continuing past Kitoden, you will come to the bright red temple Dainichido. The upper part of the temple contains an incredibly intricate room which holds a Buddhist image that is only revealed to the public once every 20 years. If you’re fortunate enough to be there to see it, perhaps the Buddhist gods are smiling on you. But if not, the room itself is breathtaking. By the way, if you are amazed at the great condition of Dainichido considering the complex is 837 years old, it is because Dainichido was built in 1981 in honor of Nakano Fudoson’s 800th birthday. 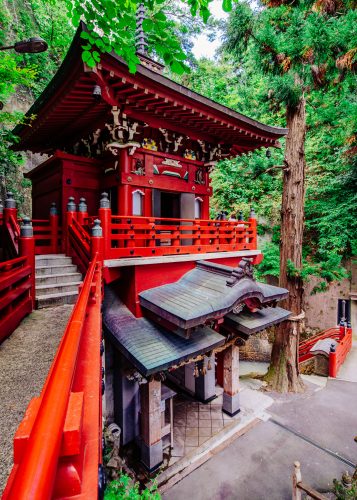 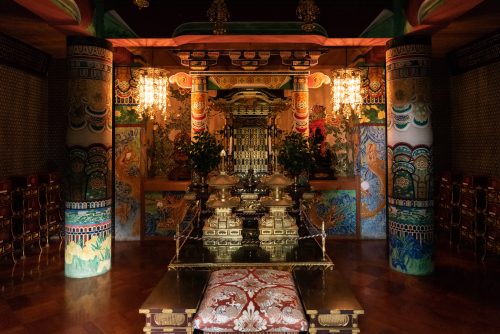 Below the Dainichido Temple is one of several entrances to the Okunoin Caves. Within the caves there are a number of passages leading to niches containing Buddhist images. If you have a touch of claustrophobia like me, you’ll likely stand at the entrance, building up enough nerves to go inside. A small child squeezed by me and skipped into the darkness. I guess I was going to have to do it.

Though the caves are tight and were carved out of the cliffs hundreds of years ago when people were much smaller, it never feels like you’re going to get lost, nor are you ever in complete darkness. Though I did take some photos inside the caves, I’ll let you visit yourself to see what is in inside. I have to leave some of the mysteries for you to enjoy on your visit Nakano Fudosan, right?

The third building is called Jakkomon and it basically functions as another entrance to the caves. All told, there are four entrances/exits to the cave complex, one coming out of the middle of a large tree! 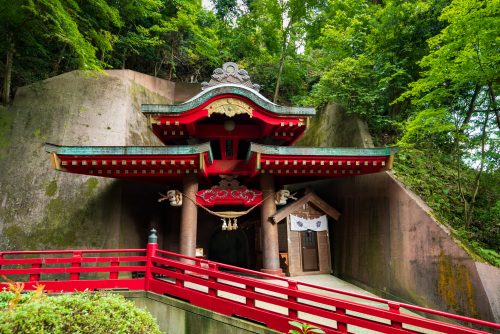 There is one more feature of of Nakano Fudoson which is impossible to overlook: the large and beautiful waterfall that cascades from the cliff wall into a pool next to Dainichido. Every year on February 28th, this waterfall and pool are the site of the Toshi Festival, a festival to ward off the evil fire god. Participants in the festival pray in a circle standing in the pool while the freezing cold waterfall pours over them. It would certainly be a good reason to return to Nakano Fudoson in another season, where the white snow is an amazing sight covering the bright red buildings. 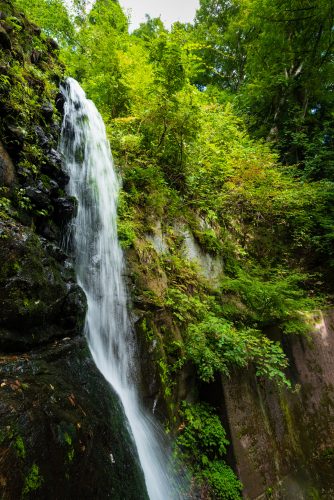 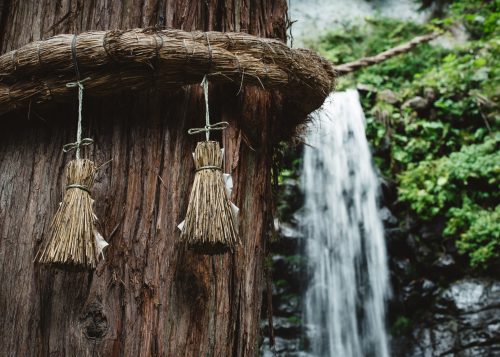 Take some time to stroll the temple grounds and enjoy the peaceful tranquility brought about by the sounds of the water falling into the pool, the summer insects chirping, and the breeze blowing in the trees. Follow some of the other paths and see what interesting things you might discover. 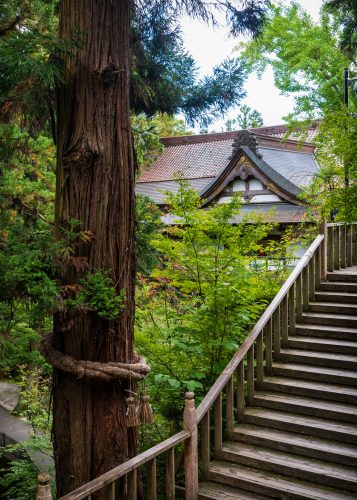 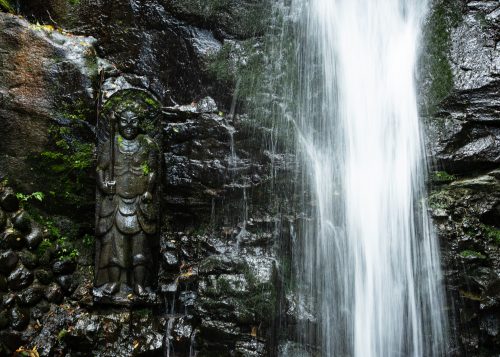 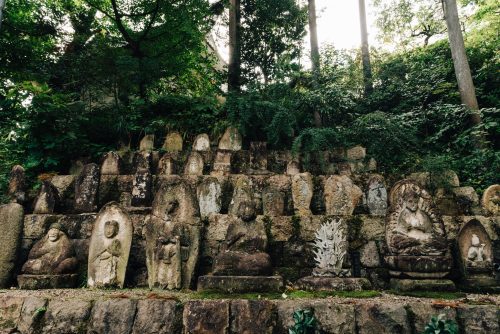 Nakano Fudoson is very close to Fukushima City and easily accessible by bus or vehicle.

If you drive, like I did, it is about a 10-minute drive from Iizaka Onsen Station, where I stayed at Nakamuraya Ryokan. If you don’t have a vehicle, take a bus from the east side of Fukushima Station and get off at the bus at the Nakano Fudoson Iriguchi (entrance) stop. The bus takes about 25 minutes and it is a 5-minute walk from the bus stop.