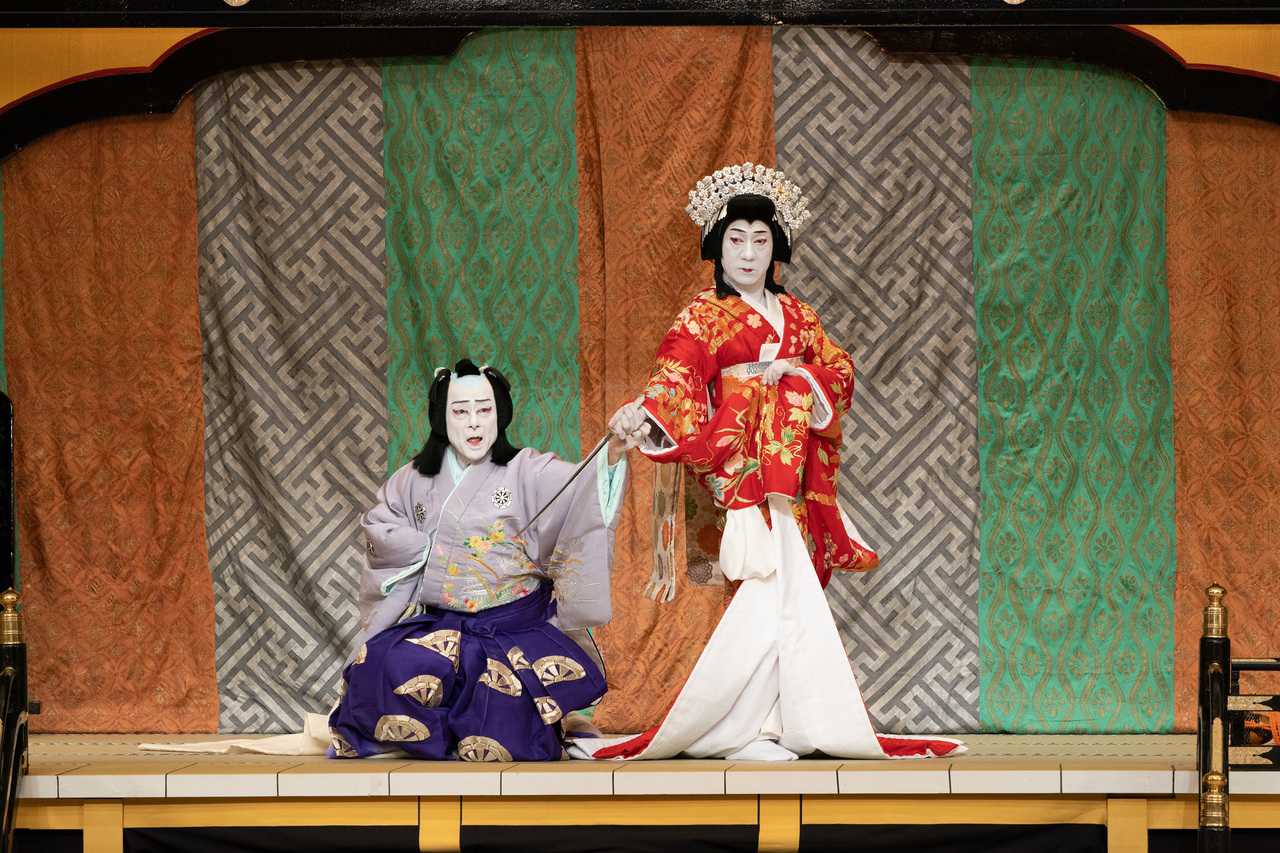 A Look Into Japan’s Past, Present and Future through Kabuki and Architecture

By Toshiko SakuraiAugust 18, 2021No Comments

A samurai on the run. A distraught courtesan. A relentless fox. History and folk tales collide on stage, where a 400-year-old craft still shines in the spotlight of the National Theatre of Japan.

The theatrical skills of Kabuki (歌舞伎) bring to life the magic of a shapeshifting kitsune (狐, fox) with the tale Yoshitsune Senbon Zakura, or Yoshitsune and the Thousand Cherry Trees. This is one of the most popular Kabuki plays still performed nowadays after its debut almost 300 years ago. As such, it was the chosen masterpiece on this special day. As part of the Japan Cultural Expo activities, Discover Kabuki provides another opportunity to become acquainted with this art form. Earlier this year, a medley of Kabuki dances featured some of their best highlights, as one of the many programs carried out nationwide within the context of the international exposure of the 2020 Olympic Games.

Among the most prominent traditional performing arts, Kabuki plays are fascinating for foreign audiences because of their uniquely polished aesthetic and radically different dramatic conventions from western theatrical ones. Historical references intertwined with traditional literary works tend to carry a lot of contexts that unfamiliar viewers may lack to try to understand the plays. This is why an introductory segment called “How to Appreciate Kabuki in English” is held where kabuki actor Tanenosuke Nakamura explains some basic concepts with the help of TV personality Ayako Kisa’s English translation.

We learn about the Hanamichi (花道), the runway employed to make entrances into the stage from among the public, which is also a device to bring some scenes closer to the spectators. It follows the Agemaku (揚幕) or the curtain that signals when someone will appear on the Hanamichi. And the ever-present Gidayuubushi (義太夫節), the pair sitting on the upper right side of the stage that recites the story in a chanting manner while playing the shamisen; along with the background music behind the Kuromisu (黒御簾), comprised of singers, shamisen players and drummers who dictate the mood of the scene through their tunes.

Once the explanations are done, the audience becomes eager for the beginning of the actual play. Yoshitsune Senbon Zakura is a play partly inspired by the literary epic Heike Monogatari and the historical events surrounding Minamoto no Yoshitsune’s getaway from pursuers sent by his older brother Yoritomo. The full play consists of 5 acts divided into 15 scenes which may take a whole day to perform. Because of this, today, Kabuki plays are performed in shorter segments which may consist of one act or a few scenes depending on the circumstances. In this case, the chosen scene is Kawatsura Hogen Yakata (The Mansion of Kawatsura Hogen) from the fourth act because it’s one of the most well-known scenes.

Besides the previous explanations, the play implements subtitles and audio guides in English so we don’t miss any details. The main performances are undertaken by actors Komazo Ichikawa and Matagoro Nakamura, undertaking the roles of Shizuka Gozen as an Onnagata (a male specialized in female roles) and the magical shapeshifting fox Genkuro Gitsune, respectively.

What follows is an unforgettable succession of striking characters in elaborated garments aided by scenery arrangements and skillful representations that surely left everyone wishing to see the rest of the acts by the time this scene came to its emotional conclusion.

Through four centuries of existence, the art of Kabuki has remained faithful to its roots while also implementing many innovations into the craft. In a similar vein, Kengo Kuma’s global portfolio sets him apart as a maverick that infuses Japanese architectural traditions with design innovations and the usage of unconventional materials. It’s worth mentioning that he was also responsible for the design of the latest iteration of the Kabukiza Theater.

It’s no wonder that another one of the activities promoted by the Japan Cultural Expo is a major exhibition showcasing a retrospective of his works. One of the leading figures in Japan’s contemporary architecture, he’s also one of the architects involved in the design of the Japan National Stadium. After being hosted in Nagasaki Prefectural Art Museum, the exhibition lands in the National Museum of Modern Art in Tokyo on June 18, 2021, until September 26, 2021.

Perhaps the unlikeliest comparison when thinking about performing arts. But Kengo himself has expressed finding inspiration in the works of journalist and urban theorist Jane Jacobs (1916-2006), who likened the daily activity on the streets of her neighborhood to “an intricate sidewalk ballet.” Every movement and interaction, no matter how big or small, was part of a larger and complex system of synergies involving people and objects, observations which would later become instrumental in understanding design of public spaces from a human perspective.

Jacob’s set of ideas has influenced Kuma in the way his works are conceived. His structures aren’t inert boxes of steel and concrete but rather living things that invite interaction and allow space for organic growth. Public spaces are thus the stage where the Japanese architect becomes the choreographer of a social entity.

Acutely aware of how human behaviour is shaped by infrastructure, he’s been set on shifting gears and changing the point of view for a fresh perspective and a new radical stance in the human relationship with the environment.

This point of view is dictated from a cat’s perspective.

Kenjiro Hosaka is the curator of the MOMAT. When interviewed about this exhibition, he was adamant about portraying Kengo Kuma in his whole facet as creator and intellectual as well as a mastermind of small public spaces such as a bar or a shop, not just as a designer of photogenic buildings. It’s the reason why he was selected as the first living architect to be featured this way at the museum.

Kuma himself acknowledged that his international works tend to be of a much grander scale than his domestic projects, which may sometimes be a bit more understated, responding to practical needs according to the visitor’s intended use. Times are pretty different from the 1960s when Kenzo Tange’s National Gymnasium left a long-lasting impression on a young Kuma. He reminisces that Japan at the time was expanding and the architecture was drawing from the period’s zeitgeist. Today’s Japan is shrinking, he reckons, and his designs also reflect this. He explains this is the role of an architect.

Pandemic times brought forth new challenges and the need to rethink spaces. While rediscovering his Kagurazaka neighborhood, the inspiration came from the area’s wandering felines. A GPS tracker following the movement patterns of two semi-stray cats began to draw a portrait of what a human relationship between public and private spaces could be like. So he formulated the concepts of Hole, Particles, Softness, Oblique and Time. These are based on the premises of human dwelling spaces; movable objects that foster interactions; textured surfaces that bring us safety and warmth and move us away from hard, sterile and slippery façades; terrain natural shapes that flow better instead of limiting ourselves to horizontal/vertical axis, and lastly, the time passage as an added value to dwellings and its influence in community creation.

The original plan consisted of a wide variety of performances that were supposed to be available in multiple languages, but Corona safety constraints have resulted in Discover NOH & Kyogen (see flyer for details) being the only other performance that will be carried out in multiple languages. This activity is scheduled for October 21, 2021, and ticket sales will be available from September 9, 2021. However, there are other performances where an outline in English is provided, like Japanese Taiko Drumming on August 7, 2021, and Flows of Japanese Music IV: Flute & Shakuhachi on October 9, 2021.