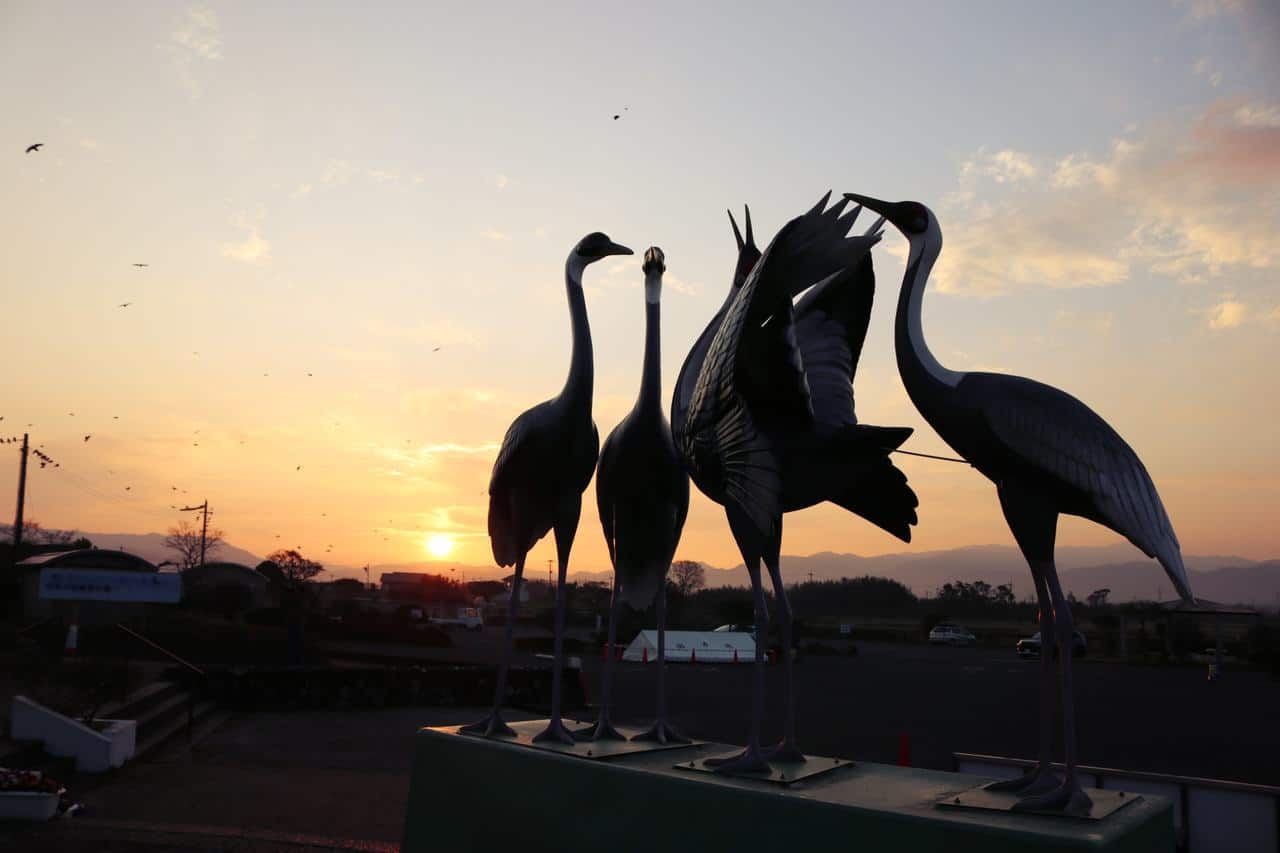 Observe the Japanese Cranes of Izumi

After having a wonderful rural experience in Izumi City, I had a very special sight to see: the Japanese cranes of Izumi. Our goal was to arrive before the sunrise and observe how these animals are fed.

I was really excited to experience this because it is one of the places with the largest number of migratory cranes; as many as 10,000 overwinter in Izumi. Moreover, different types of cranes are living together, which is quite a strange phenomenon as normally they prefer to remain separate.

In Izumi, there are four or five types of cranes that travel to this area for overwintering including the Hooded Crane (brown with a white head), the White Napped Crane (white neck and a red face) and the Sandhill Crane. These big birds – reaching 3 to 7 kg – live in Siberia, Russia, or northern China in the warmer months. Winter is so intense that they migrate to warmer places.

The Symbolism of Cranes to Japan

Cranes are animals with surprising behaviors. They are always together with their families, consisting of three or four members. Their behavior symbolizes family unity for Japanese people. It is for that reason that the image of the crane is used in weddings and marriage, symbolizing a strong union.

Crane couples that mate during the winter time, return to their country together to incubate an egg. After being born in the spring and living six months through summer, the baby crane can already fly back to Izumi! These birds can grow 3 centimeters a day, so it is no wonder that they can reach a large enough size to make the flight. After their first winter, they separate from their parents to create their own families.

Additionally, cranes are known for their long lifespans as they can reach between 20 to 30 years old. Have you ever asked why they fold crane origami for the recovery of sick people in Japan? It is because these animals are symbols for a long and healthy life.

One thing you might be wondering is why Izumi City? Why did they choose this exact area to spend their winter vacations?

As far as we know, these birds feel safe in marshy areas because at night they sleep by standing in the water, so as to be protected of predators. Long ago, the protected area was an ocean converted to a rice paddy, so they must have felt very safe here.

Protecting the Cranes from People

The crane winter migration in Izumi began in the middle of the Edo Period (beginning of the 17th Century) until the middle of the 19th century. From that time they were heavily hunted, so the population was sharply decreased. From 1921, a law was created that forbid the hunting of these animals. Their situation gradually improved up to 1952, when the area was recognized as a Special Natural Monument, and later, the creation of the Kagoshima Crane Conservation Committee in 1962, an association fighting for the crane conservation in the area further protected these animals.

Coexistence Between Humans and Cranes

In 1962, the government decided to proclaim the 50-hectare rice fields as a protected area during the months of November to March. The fields are owned by farmers, so the government gives them a subsidy in exchange for leaving their fields untended during the winter months. Altogether there are two protected areas: the Arasaki area, where the Observation Center is located and the Higashi Kantaku area, one kilometer away.

Thus, the local Izumi government cares for all its inhabitants, including cranes. The Kagoshima Crane Conservation Committee carry out daily tasks, such as their feeding.

Every morning at 7 am during peak period, the conservation group brings huge 1.5 tons bags of grain and feed the cranes. By feeding them, they prevent the animals from invading neighboring fields and eating the entire crop of other farmers.

On the cold February morning of my visit, it was not very appealing to get up from the warm futon. But cranes were waiting for me, so … good morning!

At 7 am we arrived at the Observation Center. While I was getting out of the car I heard a curious sound that reminded me of people screaming at a concert. We climbed to the upper level of the observatory and… wonderful! So many wild birds in that area, more than 300 types, some on the ground, others flying, and most of them were cranes.

The Crane Observation Center is an observatory with an exhibit explaining the ecology of the cranes. Because we arrived before the 9 am opening time, the observation center was not yet open to the public. But we had the opportunity to watch the feeding of the cranes from around the center.

After our visit, Katsuhiko-San took me to the second protected area in order to see the cranes from a closer perspective. Amazingly enough, we met a group of English tourists who had visited that area exclusively to see the cranes.

Later in the day, after enjoying a really authentic experience in Izumi City, I went back to the Observation Center during opening hours to see the exhibits. A good tip is that they have a free audio guide in English that can be accessed through a QR code. There are also many origami decorations, and they even teach you how to make a paper crane!

I really like animals and being able to learn about their habits. Having the opportunity to visit Izumi’s pride, the protected area of the cranes, and listen to the people who live daily with these animals speaking proudly to defend them filled my heart with joy. So, for me, this experience will be remembered both for the magnificence of the cranes and for the love of the Izumi inhabitants.

How to Get to the Protected Zone?

The best way to travel is to rent a car (from the Izumi Shinkansen Station) or take a taxi.

From December to February there is a bus. There is a one day ticket for 1000 yen that you can buy on the bus. This ticket also includes admission to the Conservation Center.

For more information visit the official website. To learn more about the cranes visit this page. If you would like to know more about Izumi, I invite you to read about my other experiences, such as staying in a rural house or strolling around the Samurai Town.