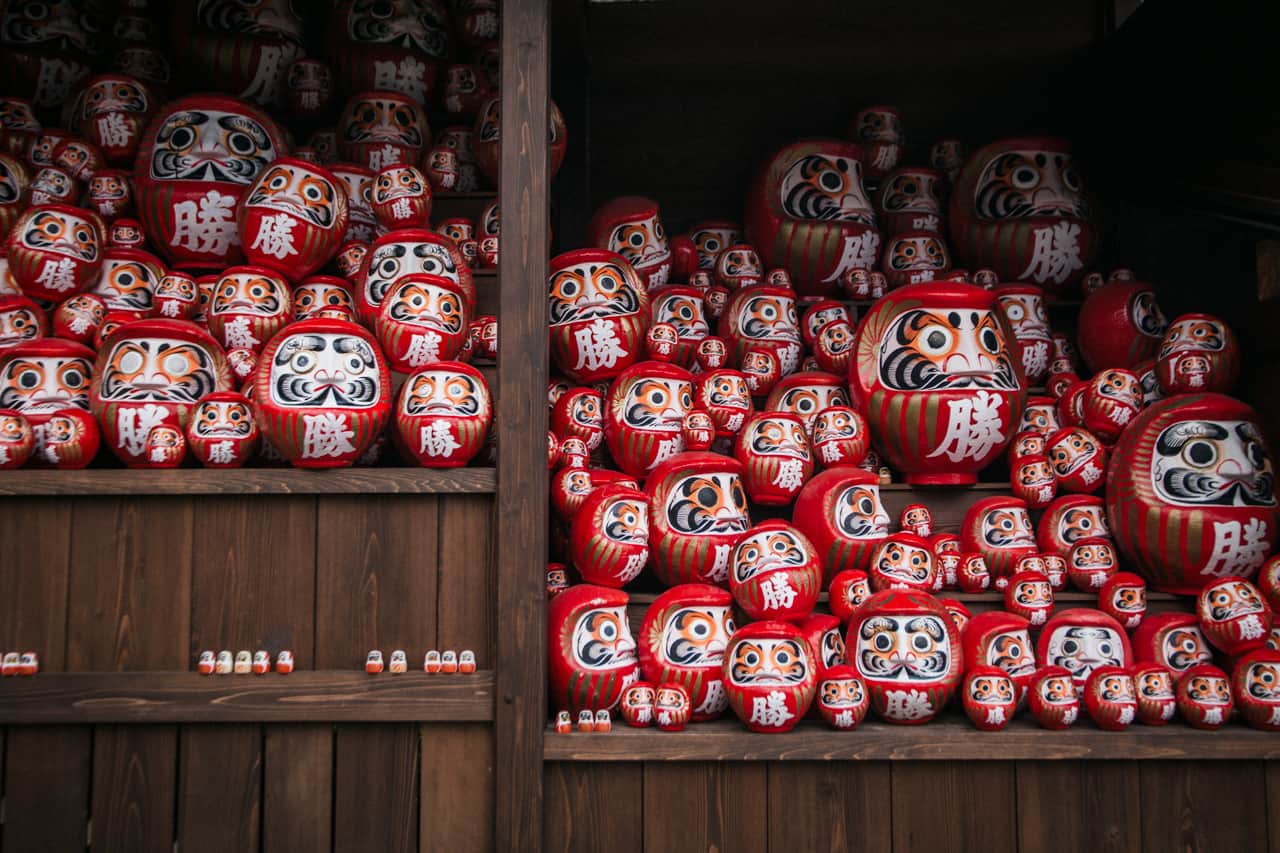 Katsuo-ji Temple: The Home of the Winning Daruma

Close your eyes and imagine a path in the middle of a mountain, surrounded by trees of red, ocher and yellow. The sound of dry leaves crunching under your feet, the roar of a waterfall in the distance. The smell of wood and wet grass and a gentle breeze against your face. Katsuo-ji Temple (勝尾寺) is located in this idyllic setting very close to Mino Park (箕面公園), a place that, in autumn, turns into a stage for a fantasy tale. Hundreds of daruma dolls (だるま) guard every corner of this sacred place.

Located in the north of Osaka (大阪) in the Mino (箕面) mountainous region, Katsuo-ji is the perfect enclave to escape the city and immerse yourself in nature.

Katsuo-ji, the Temple That Healed the Emperor

The history of Katsuo-ji Temple dates back to 727 when two Buddhist monks, Zenchu and his brother Zensan, built a hut where they devoted themselves to Buddhism. Almost forty years later, in the year 765, Prince Kaijo (Emperor Konin’s son), with the help of Zenchu and Zensan, established Miroku-ji Temple (弥勒寺) in place of the hut the two brothers had built. Their mission was to reach the spiritual realm of Buddha.

In 880, the Emperor Seiwa fell ill, and the devoted flocked to Miroku-ji to pray for his recovery. After overcoming his illness, many owed this miracle to Miroku-ji temple, and the Emperor later renamed the temple Katsuo-ji: “The Temple of the Victorious King.”

Initially, the chosen kanji (Japanese characters) were 勝王寺 –Katsu (勝) meaning ‘victory,’ Ou (王), meaning ‘king’ and Ji (寺), meaning ‘temple.’ However, the character for ‘king’ was considered too pretentious and not keeping with the values of Buddhism. The kanji was later changed to 尾 (ou), meaning ‘tail.’ While preserving the original pronunciation, the temple settled on 勝尾寺, a much more modest version of the original name.

For years after, the Shogun (feudal lords) congregated at Katsuo-ji Temple to pray for their victories. Now, people visit to offer their prayers for success in studies, love and sports competition at the temple.

The Winning Daruma, the Emblem of the Katsuo-ji Temple

One of the features that set Katsuo-ji apart from other temples is the omnipresence of the daruma. Known as Kachi-Daruma (Winning Daruma), the Katsuo-ji daruma is the emblem of this sacred place. As the dolls watch every corner of the temple grounds, they provide a unique atmosphere to Katsuo-ji Temple.

What is Daruma? A Brief Introduction

The daruma is one of the best-known amulets of Japan. Unlike other charms meant only to attract luck and fulfill wishes, the daruma symbolizes perseverance and serves as a reminder to set goals in one’s life. When first purchased, the eyes are left white, and the owner paints them black once they have achieved their goal. If left incomplete, the doll acts as a reminder to stay motivated to complete their work.

Daruma is made of wood and have no arms or legs. Their weighted base prevents them from falling or tipping over, which represents perseverance and reminds us not to falter in the face of adversity.

The daruma is modelled after Bodhidharma, the founder of Zen Buddhism. According to legend, Bodhidharma spent nine years staring at a cave wall in intense meditation. One famous account tells of his limbs atrophying after lack of use for nine years, and in order not to fall asleep, cut his eyelids off. As a symbol of motivation, sacrifice, and never giving up, the daruma has been depicted without arms or legs and with white eyes ever since.

Once you get your daruma doll, write the goals you’d like to achieve on the back. Next, go to the main temple building (right in front of the daruma shop), pick up a stick of incense, and pray for your goals’ success. Afterwards, stick your incense in the ashes and purify your daruma into its smoke and infuse it with positive thoughts.

Finally, with a permanent marker, paint the left eye of your doll. Once done, your daruma will be ready to travel home with you. The single painted eye will help remind you to finish your goal so that you can paint the other eye. Once you’ve painted both, it will effectively complete your doll.

Visitors can also purchase a mini daruma for 500 yen with an omikuji (おみくじ, fortune paper) inside. Many visitors place their daruma throughout the temple grounds, which adds to the magical atmosphere of the place.

The Entrance of Katsuo-ji Temple

The temple complex has a large, red torii gateway that is hard to miss. After we parked our rental car at the parking lot and paid for our 400 yen admission fee at the ticket office, we continued.

As impressive as the large red torii door was, I was more surprised after going through it. As I walked through the bridge across the central lake, a dense mist came from the sacred water to envelop me and transported me to a mysterious, fantasy world.

Once I returned to reality, I climbed up the stairs that led me to the temple’s main building. On the way, hundreds of little daruma watched me pass by. The short walk became a hide-and-seek game – trying to find the hidden daruma in the most unlikely places.

A Pilgrimage of 88 Temples

One of the unique features of this temple is a small room of 88 statues. It has a special connection to the Shikoku pilgrimage, as every statue represents the 88 temples along the pilgrimage route in the Shikoku region. The popular belief is that when walking this route, one becomes aware of their true self, and as a result, reduces frustration and superficial desires disappear.

I finally made it to the main temple building. This time, I didn’t buy a new daruma doll, as I had an incomplete one I acquired during one of my trips in Gunma prefecture (群馬県), back at home. If fulfilling one goal was already challenging, achieving two would be an impossible task!

Beyond the main temple was a viewpoint that I could take in the natural landscape surrounding Katsuo-ji Temple. There were also dozens of small daruma watching the horizon from this privileged enclave.

Farewell to the Goddess Benzaiten

Before saying goodbye to Katsuo-ji, I headed towards a small shrine dedicated to the goddess Benzaiten (弁才天), the deity of music and fine arts. In the middle of the great lake and beyond a beautiful red torii gate, was the shrine. The soundtrack was the sound of water falling from a wooden platform and hitting rocks below. It sounded like the perfect musical harmony for the deity of music.

Finally, my visit to Katsuo-ji, one of the most fascinating temples I’ve seen in Osaka prefecture, came to an end. And while I advanced towards the exit, I couldn’t help but stop several times to contemplate the beauty found in every corner of that magical place.

Before leaving, I visited Mino Park near Katsuo-ji Temple. Walking along its paths felt like a true immersion into nature. Enjoy a beautiful waterfall, eat tempura momiji (Japanese maple) leaves deep-fried in a sweet batter and keep your eyes open for the monkeys that inhabit the park.

Mino Park is the perfect place to end your day and enjoy the fresh air before heading back to bustling Osaka. For more information, please read our article of Mino Park during its magnificent season of autumn.

How to Get to Katsuo-ji Temple

To get to Katsuo-ji Temple, I’d recommend travelling by car, as it will allow you to explore the area more freely without waiting for public transit.

To get to Katsuo-ji Temple by public transport, these are the most convenient ways to get there:

I recommend checking the bus timetables and asking for other transportation options at an Osaka tourist office before starting your journey to Mino.