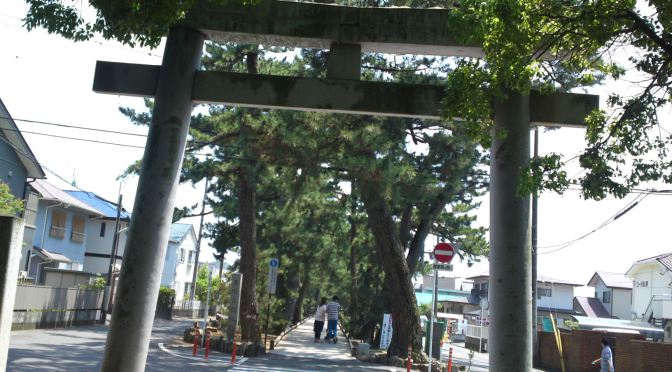 The Legend of Hagoromo in Miho Beach Pine Forest, Shimizu

This pine forest, the peninsula of Miho and the beach of Matsubara have become a World Cultural Heritage in the company of Mount Fuji in recent times. With all its pine trees (as it’s name indicates) is also the home of a very ancient and famous legend all over Japan: The Legend of Hagoromo!

The monument marking the entrance of the “Path of the Gods”

Take your time and take a rest if need be

The whole path is lined with venerable pine trees

The Legend of Hagoromo, “Hagoromo (羽衣)” means veil or garment. One day a local fisherman discovered a veil hanging on a low branch of a pine tree.

Just as the fisherman was going away with the veil a lady deity appeared and told him it was her veil and to give it back to her.

The fisherman asked for a dance in exchange for her treasure without which she wouldn’t be able to go back to heaven.

Playing on her lute she performed the “Dance of the Moon”

Naturally the hotel has a statue commemorating the legend

Every year a Traditional Noh Theater play is performed inside the forest to relate Hagoromo’s legend of the Celestial maiden and her veil.

The legend says that the pine tree is 650 years old

The very pine tree and its low branch

More information but only in Japanese

The Noh play takes place there

Don’t worry, the park has plenty of shops for food and refreshments – and facilities

Visitors come from all over Japan

The pine forest has it own minuscule shrine called “Haguruma”

Many people of course visit the beach

But it is still too early for the bathing season