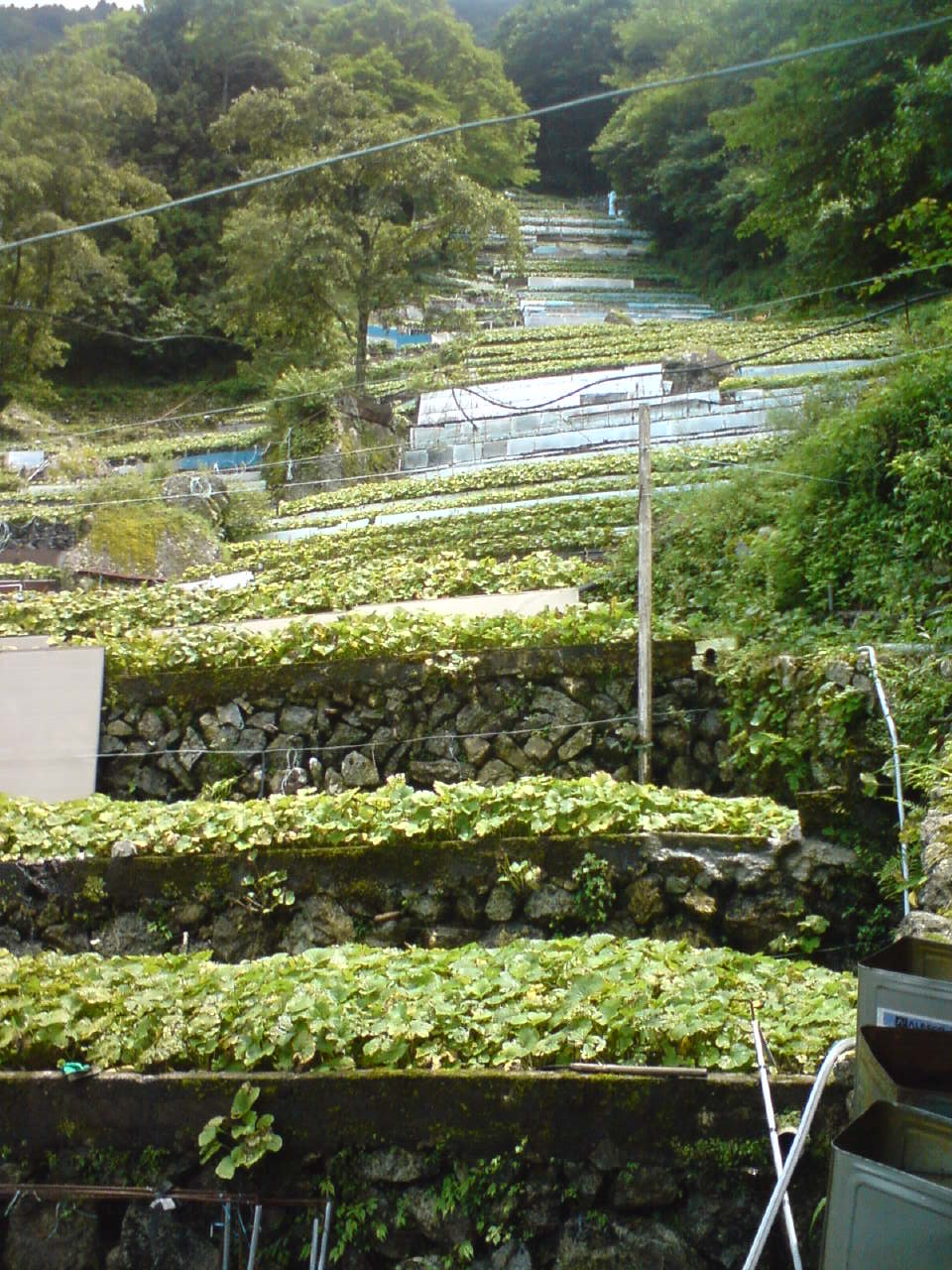 A visit to the birthplace of Wasabi, Utogi 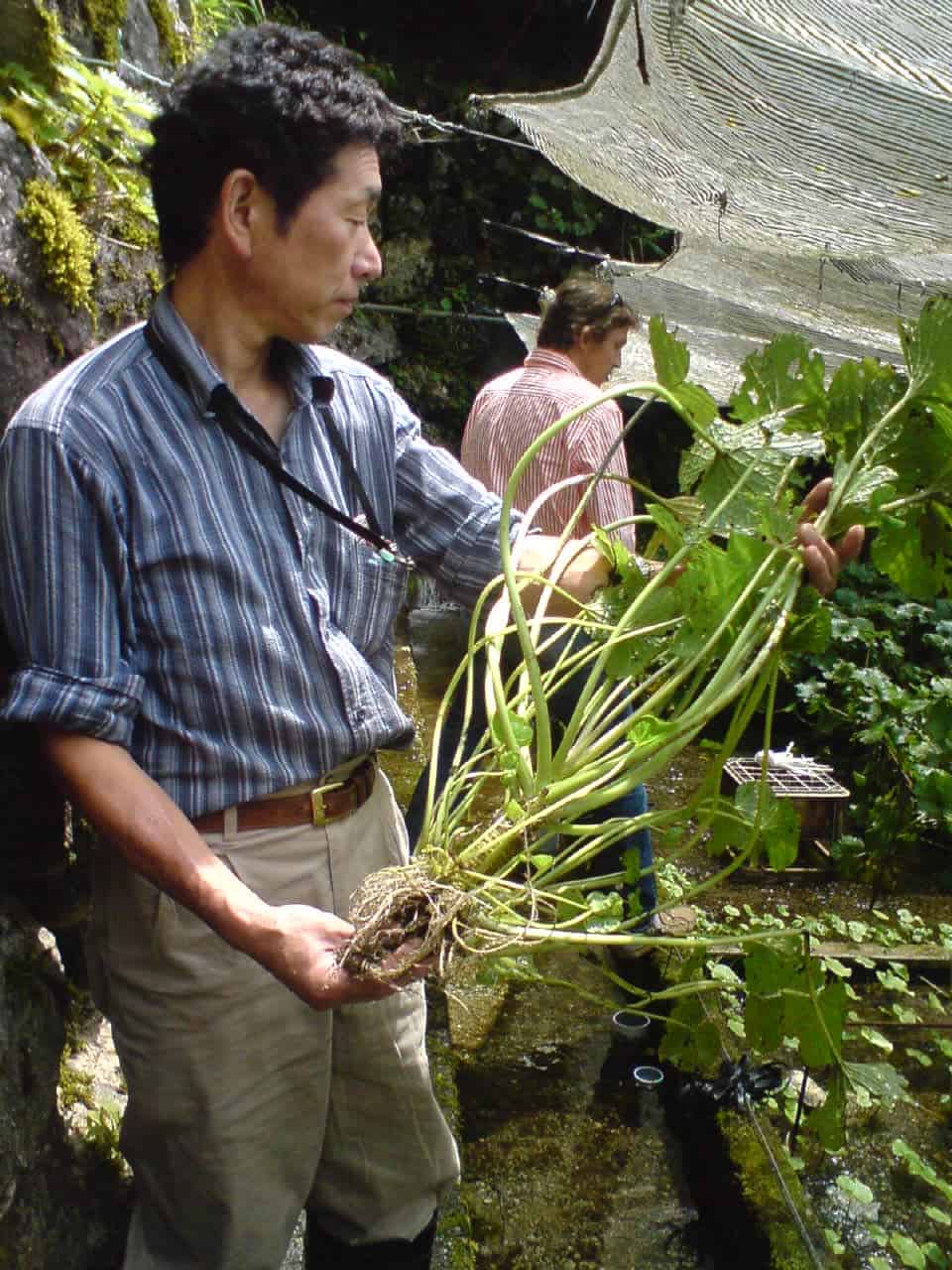 The other day I received a phone call from my good friend, Dominique Corby, the Chef/Owner of French Kappo Dominique Corby in Tokyo.  He told me that the French/German ARTE TV Channel was coming to Shizuoka City to make a long report on green tea (Shizuoka produces 45% of all green tea in Japan), wasabi (Shizuoka produces 80% of all organically-grown  wasabi in Japan) and the fishing industry in our Prefecture (they will visit the Fishing Harbor of Yaizu).

Corby wished to enroll my help to “prepare the ground” for the TV crew as I was not only living in Shizuoka, but I knew my wasabi well. He didn’t have to ask twice.Rooting in our plan, a third Musketeer named Stephane Danton of Ocharaka – a French specialist of green tea in Kanagawa Prefecture who exports green tea from Kawane Honcho in Shizuoka – joined us on Thursday and Friday the 12th and 13th in a rented car and we left on a grand mission. 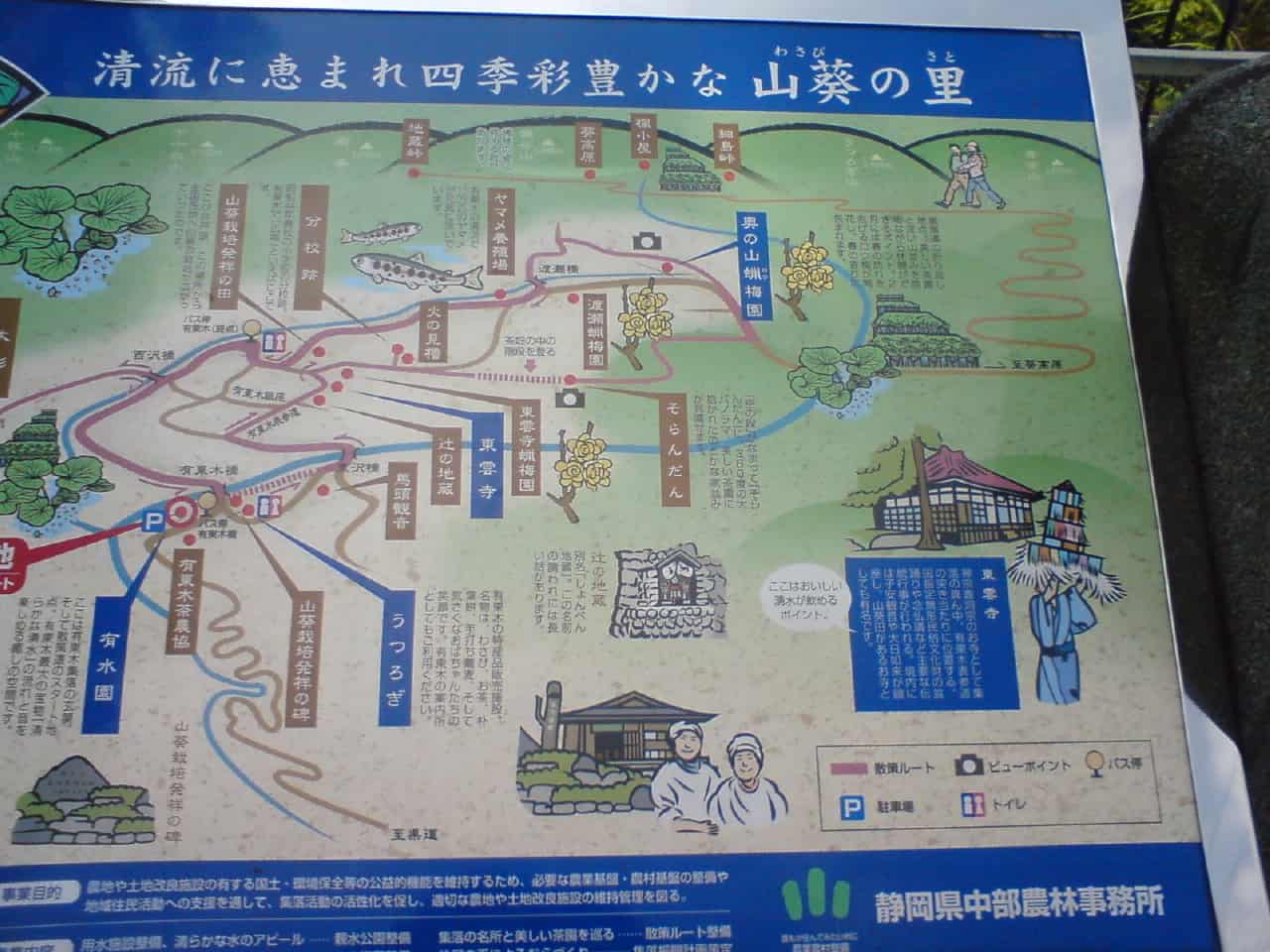 Utogi is also the starting point of some great treks

We did spend the whole previous day following Stephane in tea growing farming homes and communities, as the rain just made it impossible to visit the wasabi fields in their altitude. So we left early in the morning on Friday from Shizuoka City in blistering heat. The ride is not that hard, 18 km along the Abe River and 3 more km up in altitude, what with the beautiful vistas between high steep forested mountains. We reached Utogi at around 11:00 a.am. where Mr. Yuma Mochizuki was already waiting for us. 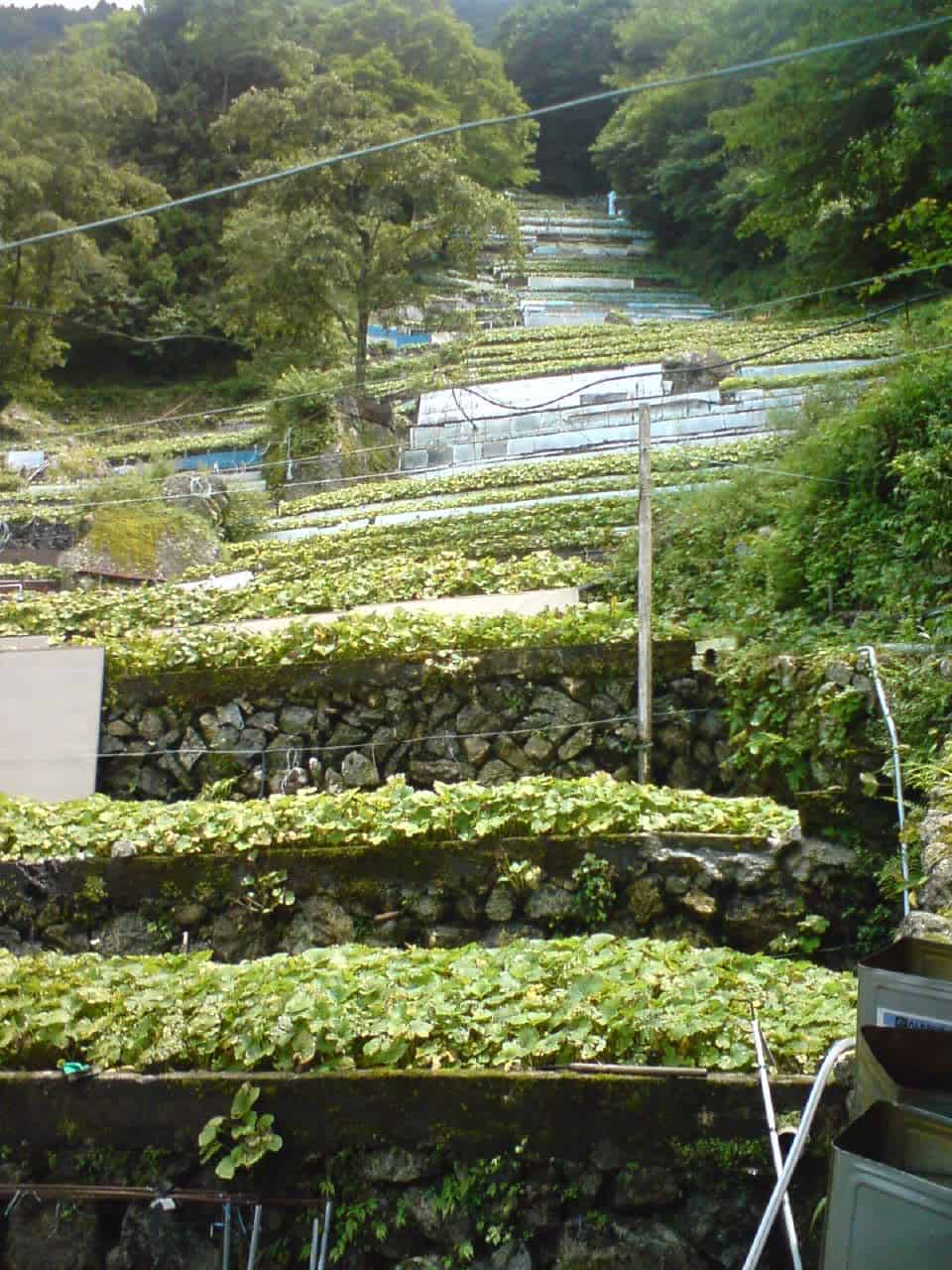 Mr. Yuma Mochizuki is of the 10th generation of a celebrated wasabi-growing family. He presently owns 5 fields dispersed throughout the Utogi Mountains, and is trying to buy more land in Fujinomiya City as the demand for wasabi is growing and there is simply no space left in Utogi. Wasabi grows in the wild and its stems and leaves have been consumed as a vegetable and a natural medicinal herb for eons. It is only in the beginning of the 17th Century that a farmer in Utogi succeeded in growing the root that is so appreciated in the world. Wasabi roots of a small size will develop in the wild after 2 or 3 years, but they are too sour and “green” to be consumed at all. Although its cultivation is purely organic/macrobiotic in Shizuoka Prefecture it does need the help of a human hand. 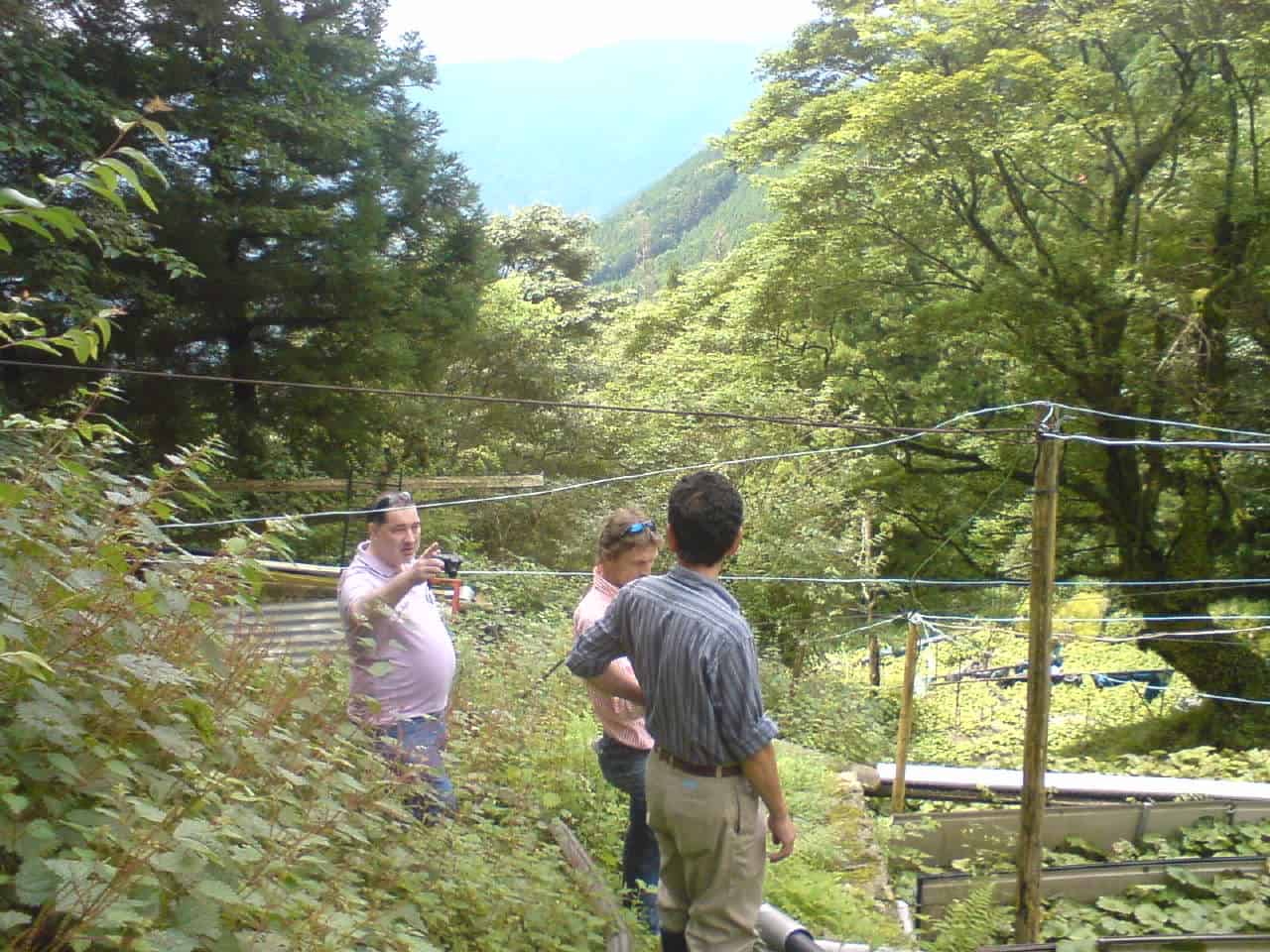 Mr. Mochizuki first took us to his highest field at almost 1,000 metres (well over 300 feet) to an almost inaccessible locale among trees, steep slopes and up impossibly narrow and slippery “stairs”, but it was certainly worth it. He then took us (always by car as walking was not much of an option what with the heat and the distance between fields) to the field that would appear on TV. 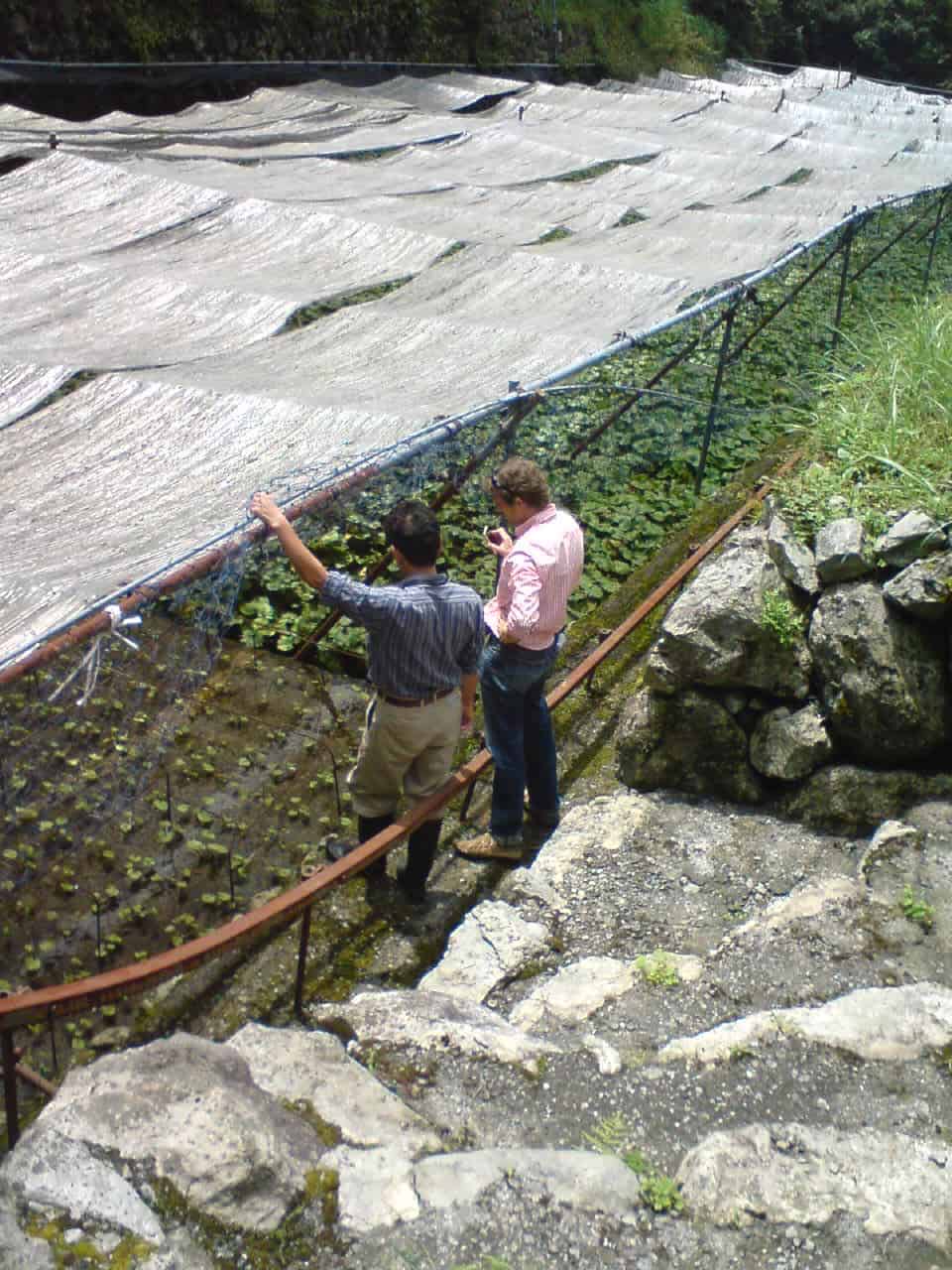 The whole field is covered with a black mesh net to protect it from too much exposure to the sun. These nets are stretched over the field only when it is directly under the path of the sun. Some fields are not, but all fields have to be protected with supplementary solid side nets to keep wild monkeys, wild boars and wild deer away as they would leave nothing of the stems and leaves. 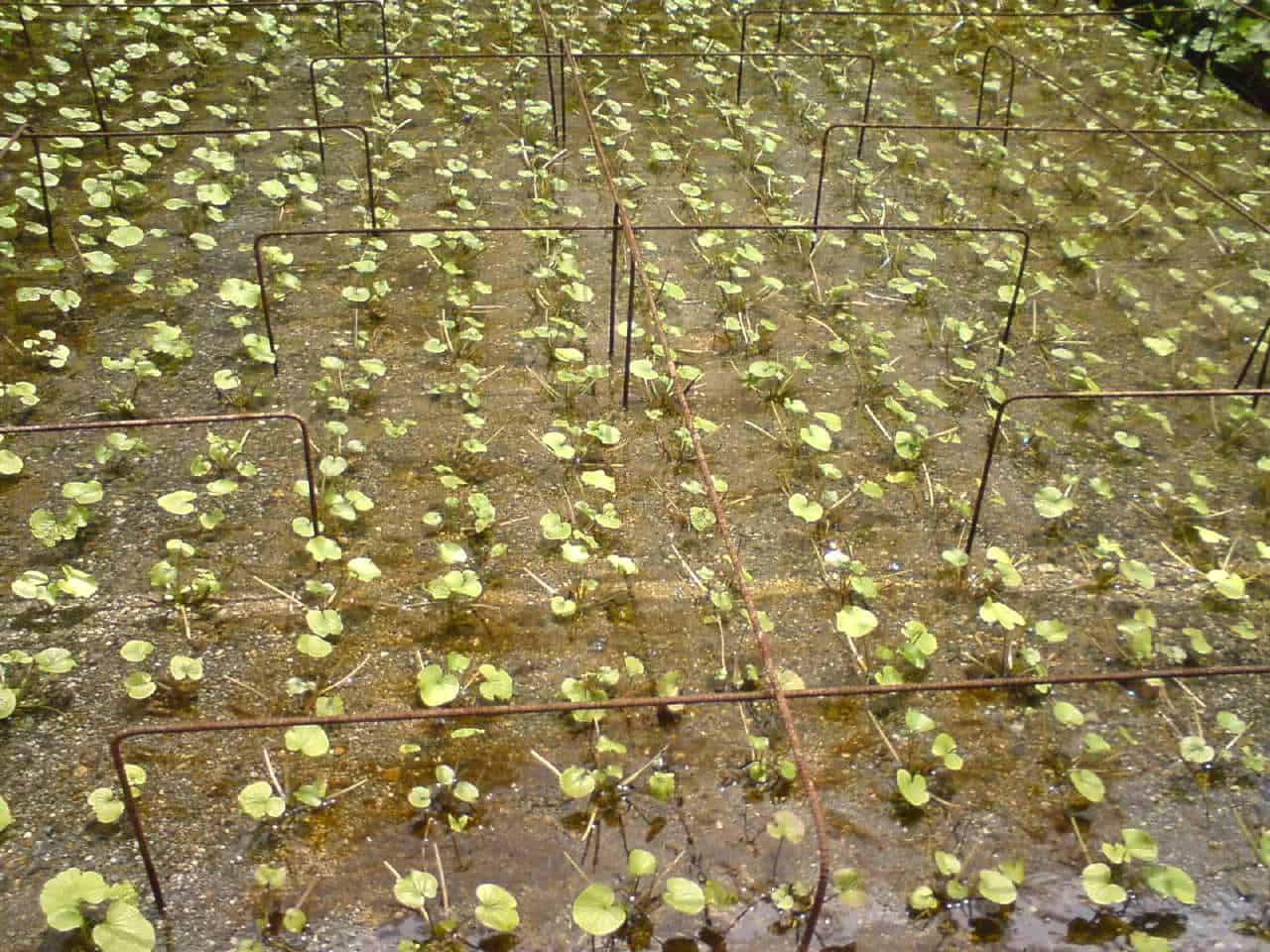 Wasabi seedlings have to be regularly replanted every one or two years depending upon the variety. There are actually more than 100 varieties of them. Mr. Mochizuki grows ten of them. The seedlings above had been replanted only one month ago. 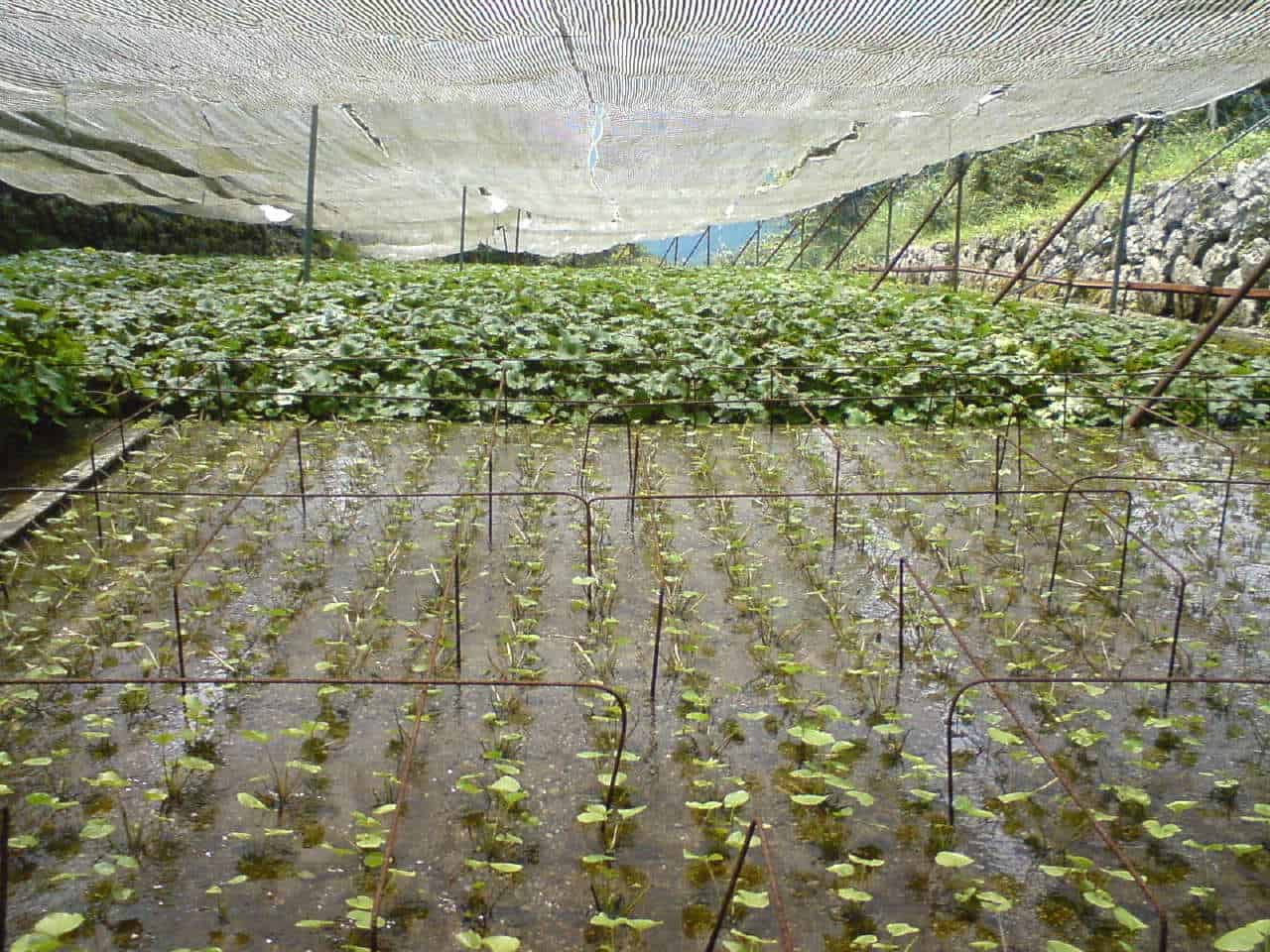 Here is a “view” (from under the nets) of the upper part of that particular field with about one-year-old wasabi plants in the background. 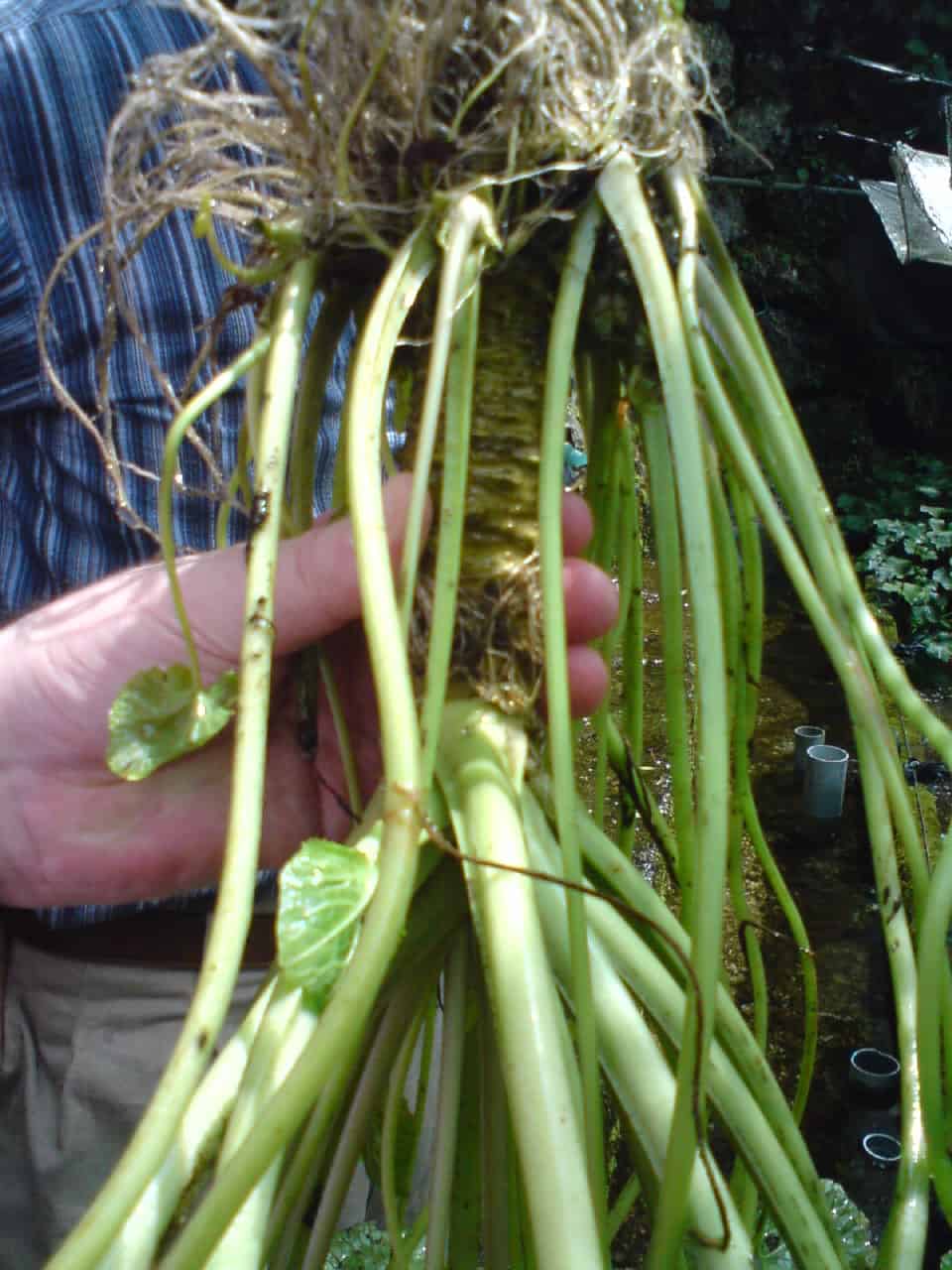 After one or two years, the wasabi plant matures to almost one metre in height; root, stems and leaves included. Subsidiary plants will grow from the bottom of the main large root. These will be cut out to be replanted as seedlings. The large root will be harvested for the wasabi paste. The stems will be pickled in Japanese sake white lees to become “Wasabi Tsuke”, a delicacy one can use to season his/her bowl of freshly steamed rice with or with fish and fish paste. The leaves can be pickled too, although they are eminently edible raw, steamed or cooked. Shizuoka people use them as “vessels” to taste miso paste! 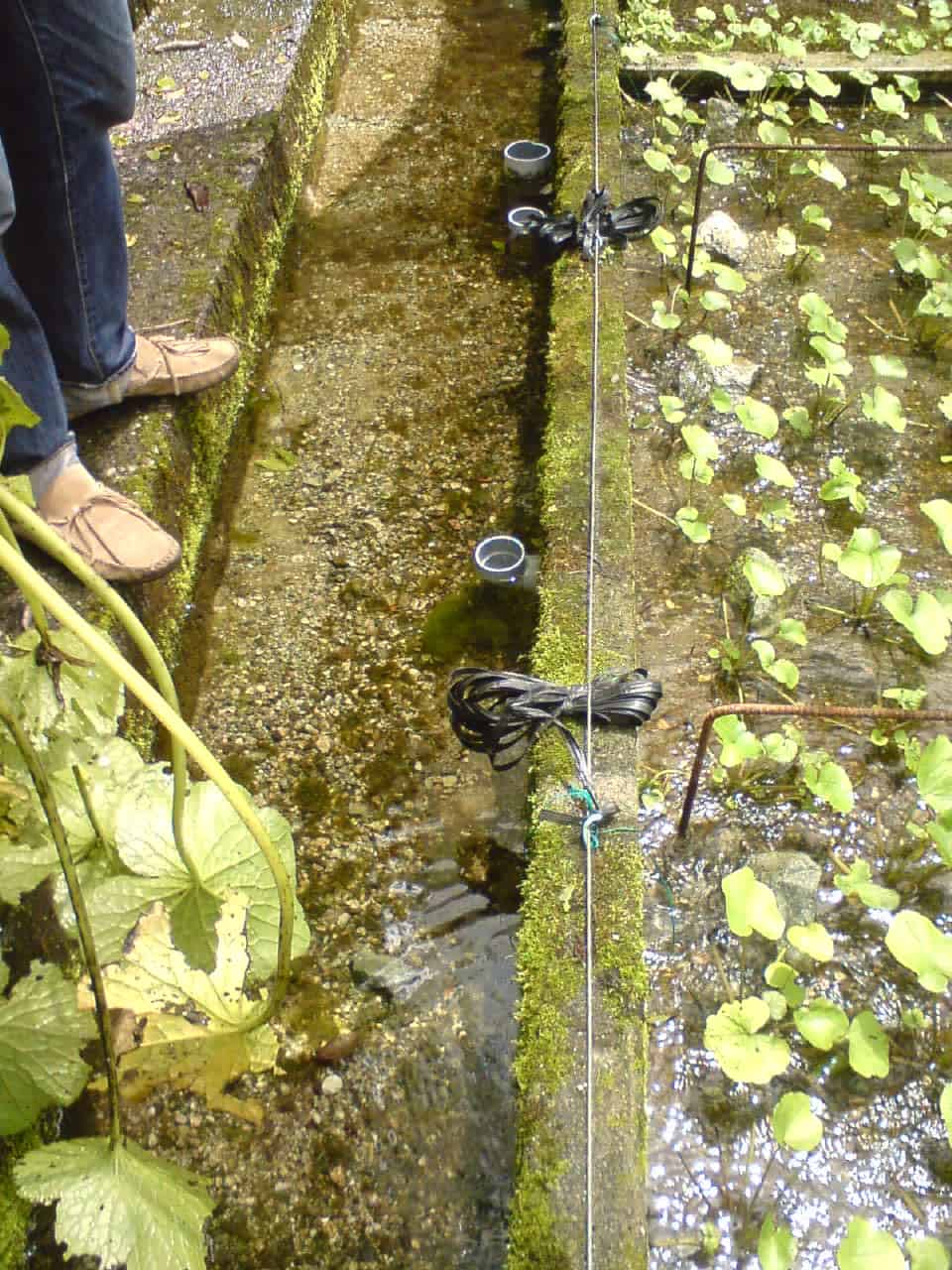 Only pure mountain water flowing at a constant temperature may be used in the culture of wasabi, that is “sawa wasabi” which grown in water as opposed to “hatake wasabi”, of a very inferior variety, usually not grown in Shizuoka Prefecture. Stagnant water is out of question. Moreover, and this is a little-known fact, individual field sections and fields in general do not communicate with each other. Water comes through pipes directly connected to mountain streams to bring water to each field section. It is then diverted to side funnels which prevent any water from going back into another field.

True environmental/ecological and organic culture as apart of the bed sand and water, nothing else goes into those fields.

Although Mr. Mochizuki was very busy preparing the big festival to be held on Saturday and Sunday with the whole community, he kindly took the time to invite us to his enormous Japanese house (all sitting on tatami there) to share tea and sample his wasabi crop. We had the pleasure to meet his very gentle spouse and the energetic 11th generation Yuma Mochizuki (望月佑真). 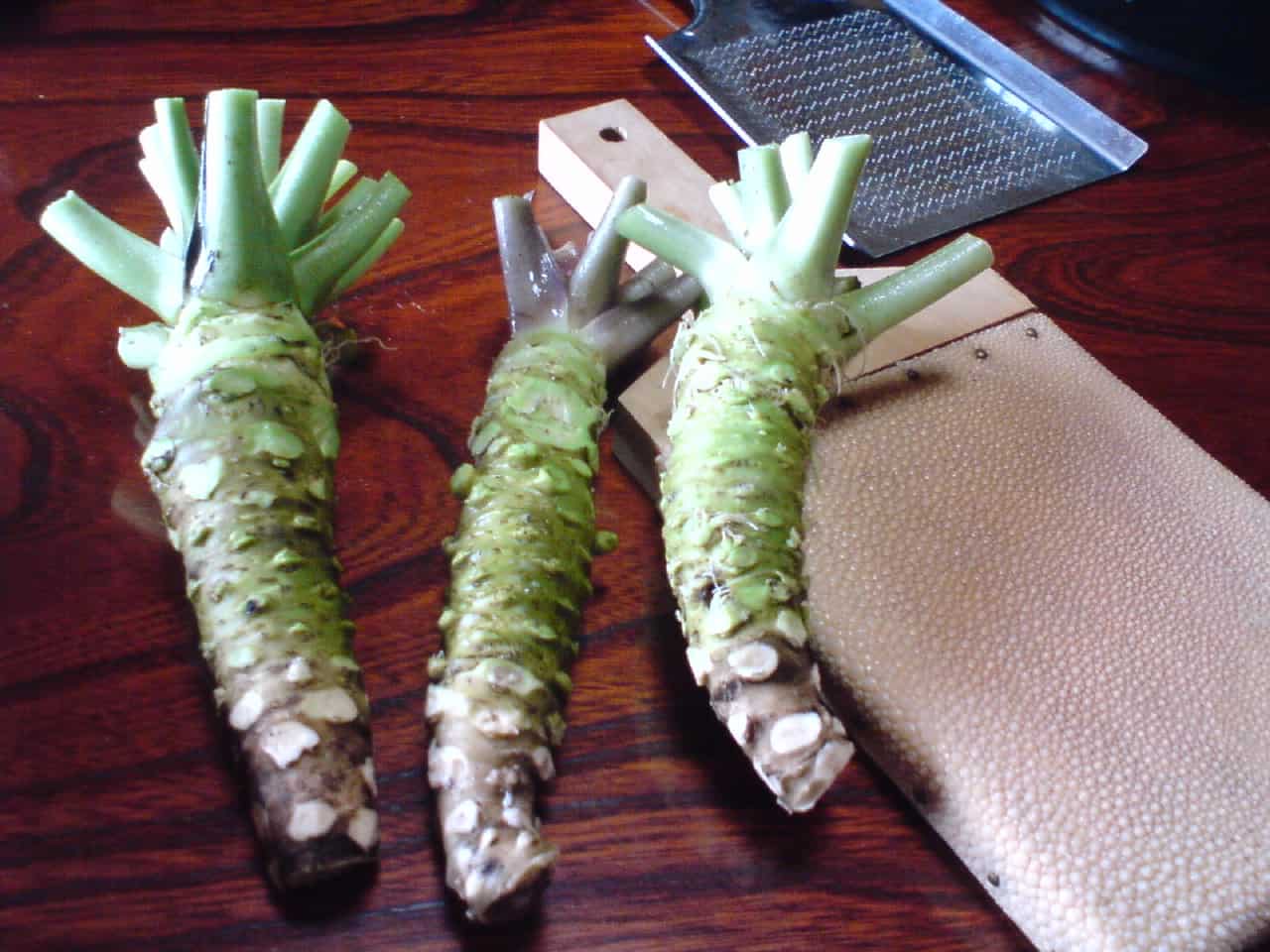 Here are the best samples of 3 of the best out of the 10 varieties the Mochizuki family grows. Can you guess which is the best one?… The one in the middle with the dark stems. It was actually elected twice “Best wasabi in Japan”! 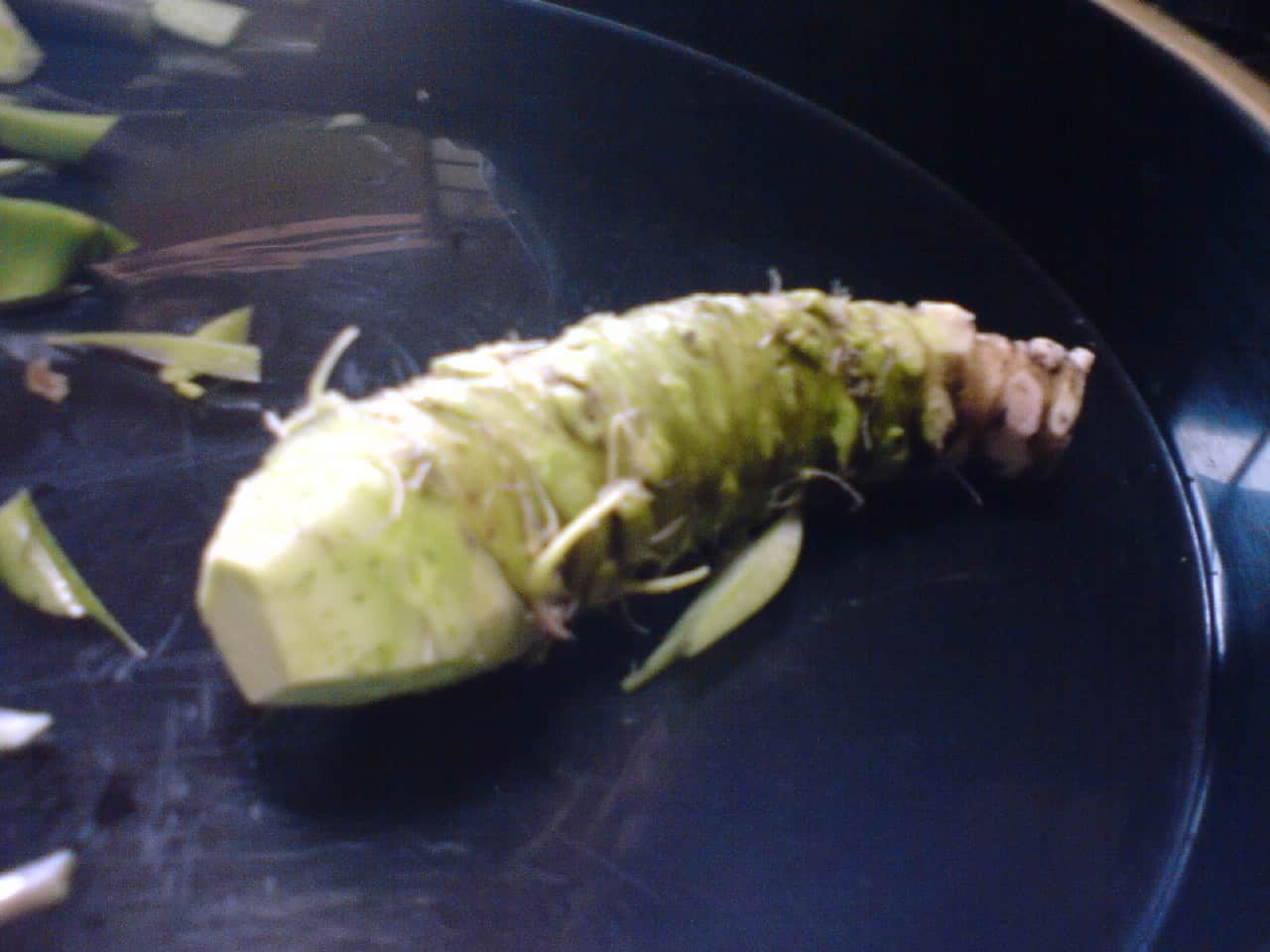 Now, where do you grate the stem from? The pointed end or the stem end? Well, this is according to priorities, but usually after chopping the stems away from the root is first grated from the top as it will hotter as you come closer to its pointed extremity. This way you can control the “heat” of the root (or mix the whole later). 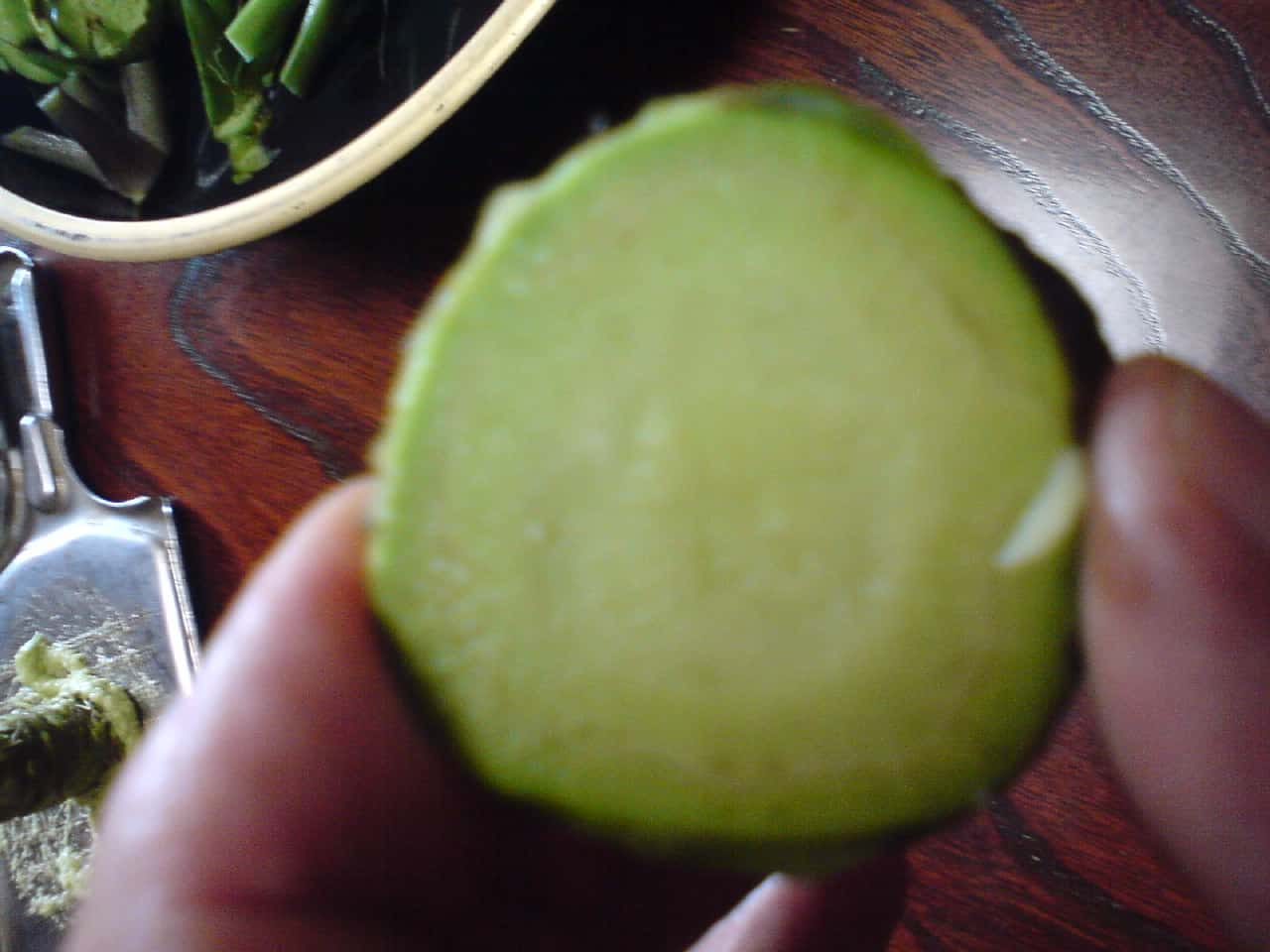 Have you ever seen the cross section of a healthy root? 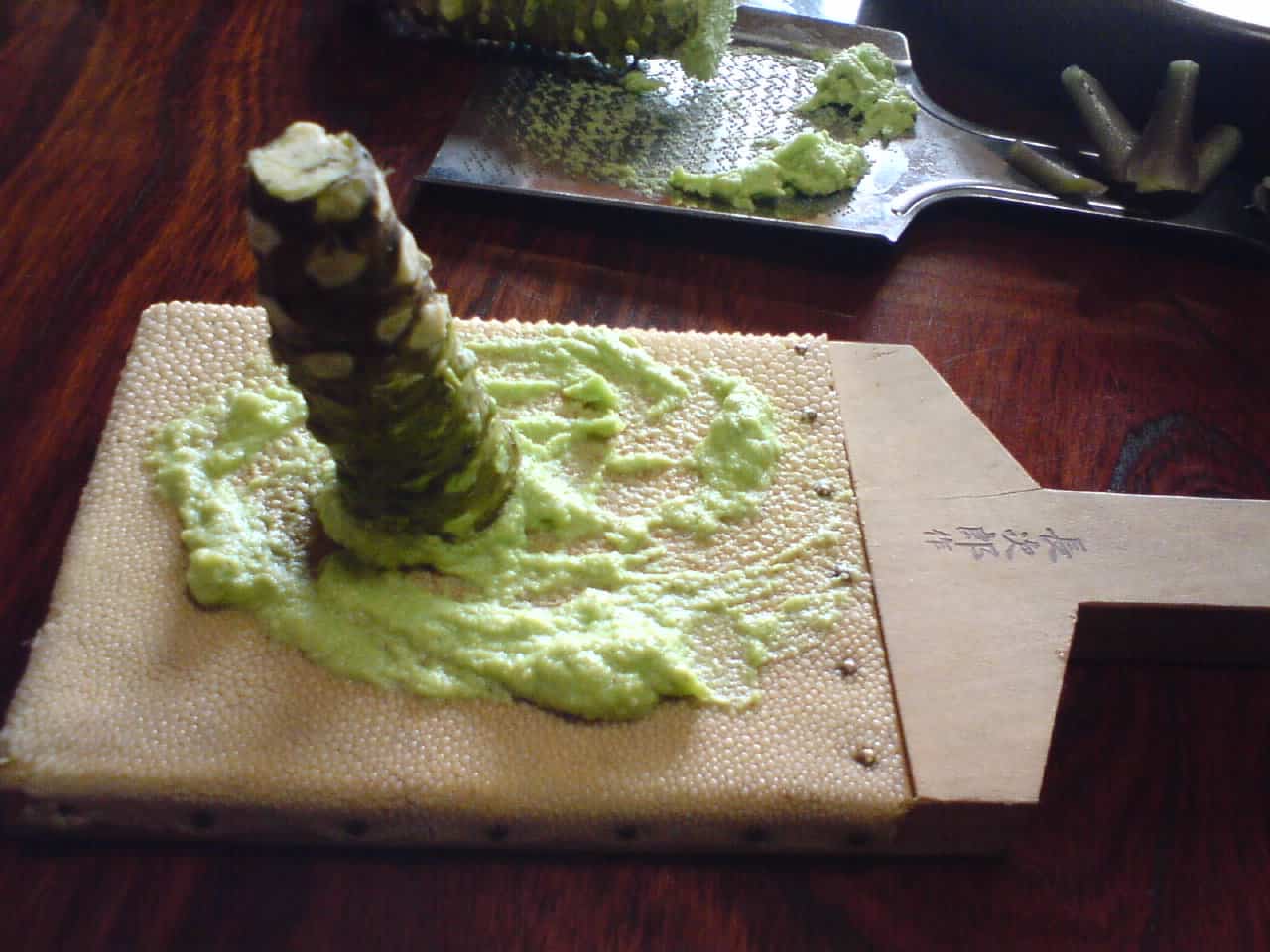 The traditional way to grate the wasabi root is on a wooden slat covered with shark skin. Mr. Mochizuki explained this is now done only for the sake of tradition. Sushi and soba chefs will grate (away for the clients’ eyes) on a new and very efficient metal grater (in the background). 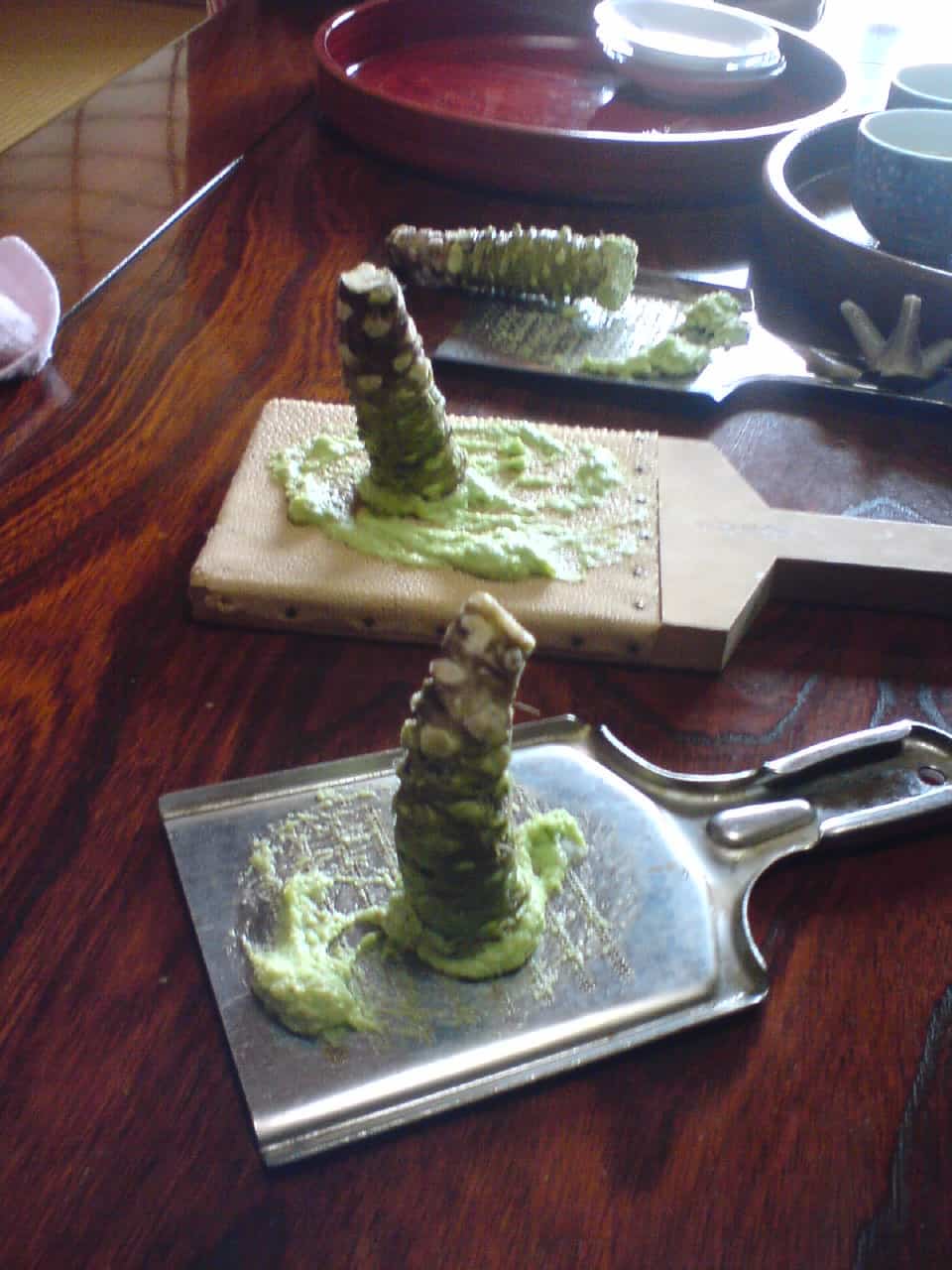 Look at that extravagance, Mr. Mochizuki was indeed so generous in his demonstration