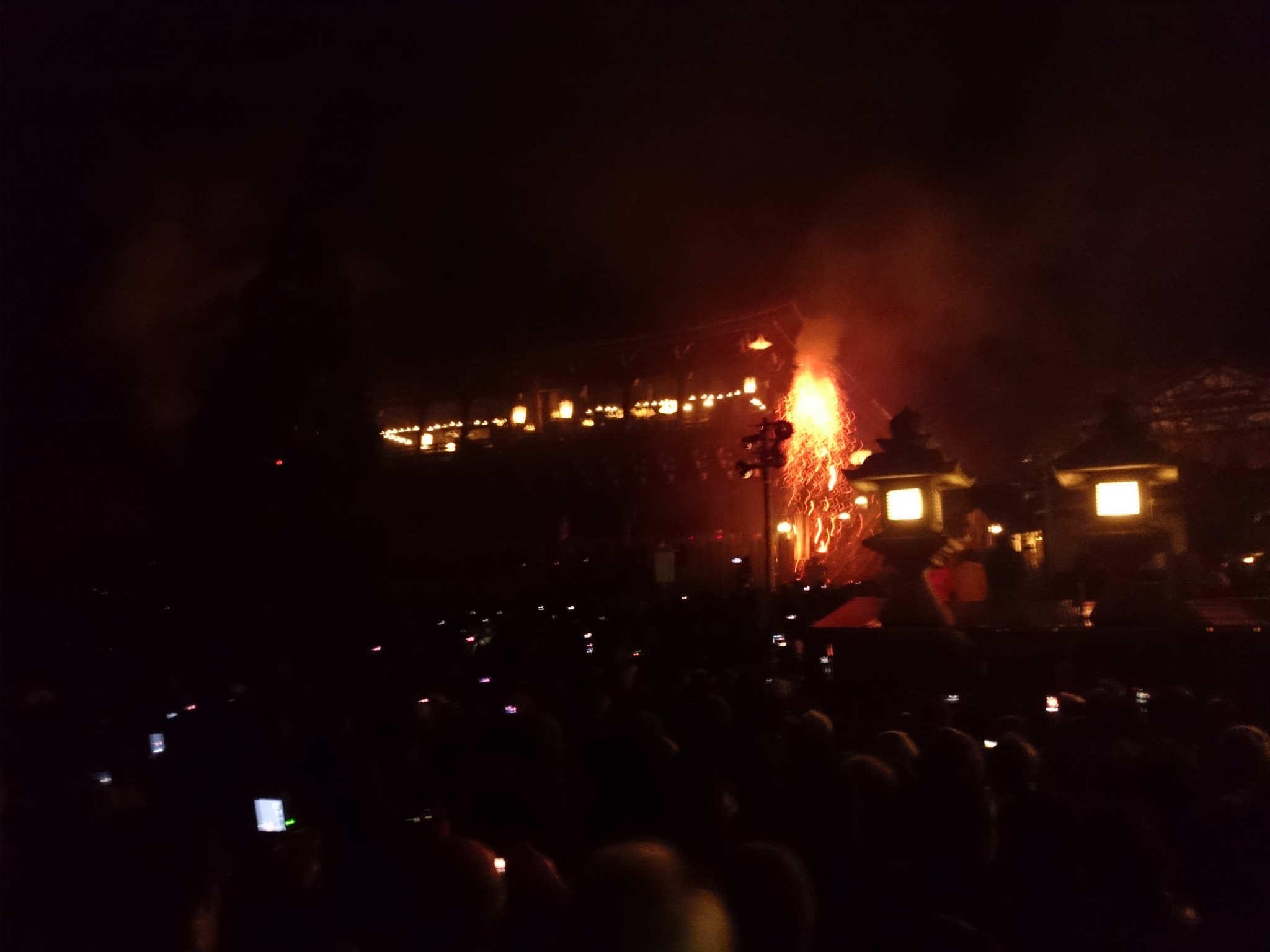 For over 1000 years, the annual Omizutori (お水取り) festival has been held at the Nigatsu-dou temple in Nara. With such a far stretching history, it is believed to be Japan’s oldest continuing Buddhist tradition. The festival originates from (at least as the story goes) a party thrown by the founder a long time ago. He invited thousands of Gods to his ceremony, but the God Onyu-myojin was late because he was busy fishing. I do like how these Gods are so human sometimes… To make up for his tardiness, Onyu-myojin caused scented water to sprout from where he stood, and thus holy water springs at this place just once a year during the festival.

When to Arrive at the Omizutori Festival

One thing about the festival is that it starts at 19:00, so you have most of the day to enjoy Nara beforehand. Of course you should go to the Nigatsu-dou temple as early as possible to secure a good spot. This is something I didn’t do, and regret it. I can say that between 18:00 (when I arrived) and 18:30 the crowed almost doubled. In other words make sure to get there no later than 18:00 to avoid a really bad spot.

Nara has many attractions though, like cute deer, many shrines, temples and of course delicious foods. This sweet is called matcha. It’s like a custard jelly type texture and it’s pretty incredible.

How to Get to the Temple

To reach the festival location from Kintetsunara station, walk east along the main road, through the pedestrian tunnel and all the way until you hit the park.

Take a left toward Todai-ji and pass through its first gate.

At the pond outside Todai-ji take a right turn.

And head through the daimon and up the stairs which take you to the festival at Nigatsu-dou temple.

What to Expect at the Festival

As you can see, the festival is quite crowded…the spot I got for arriving at 18:00 is not very good… but it could have been a lot worse.

Just before the festival begins they cut the lights! Cue the sea of smart phone screens. It is also requested that you kill the flash on your camera, but unfortunately many people are just rude.

The monks bring the burning torches up the staircase to the right of the temple, running all the way. They really make a show of it too, twirling them around and sending the sparks flying! A still shot really doesn’t do the Omizutori festival any justice to be honest, which is all the more reason to make it there yourself.

If you get to Nigatsu-dou early enough, you can get a spot at the courtyard in front of the temple. From here you might be lucky enough to have the sparks rain down on you. Yes that’s right, I said “lucky enough”. Apparently if this occurs, you will be blessed with good luck for the year.

After the burning of the torches ends, most of the crowd disperses and goes home, but many remain to climb the stairs and pay a little visit to the temple.

It looks really nice at night, with the burning lamps and bustle of people.

After seeing the view of Nara city from the porch of Nigatsu-dou, you can head home by walking down the flight of stairs that was used during the Omizutori festival. Have a look at the ground, it’s covered in ash from the burning torches! I saw many people collecting this ash into bags. Maybe it’s good luck or maybe just for their gardens? Who knows… does ash make a good souvenir? Probably not.

I like this photo, because I’ve never seen Todaiji without people everywhere. Being in a tourist spot after hours has its advantages.

Additional Information about the Omizutori Festival

Time: The Omizutori festival runs for about 2 weeks, from March 1st to March 14th each year. This makes fitting it into your travel itinerary easy, and definitely worth doing. There are a few variations between the days though so if possible you should plan for one of the bigger days. The 1st to the 11th and the 13th are essentially the same, with 10 torches set alight from 19:00. The 12th is a much longer ceremony with bigger torches where the audience is moved through the courtyard, ensuring all attendees get a good view. The 13th is very short in comparison, but “the flame that burns half as long burns twice as bright”. In other words they burn all the torches at one time, instead of piecemeal, which is arguably a better experience.

I hope you will enjoy the Nara Omizutori festival! Any reason to go to beautiful Nara is welcome, and this is one of the best around.