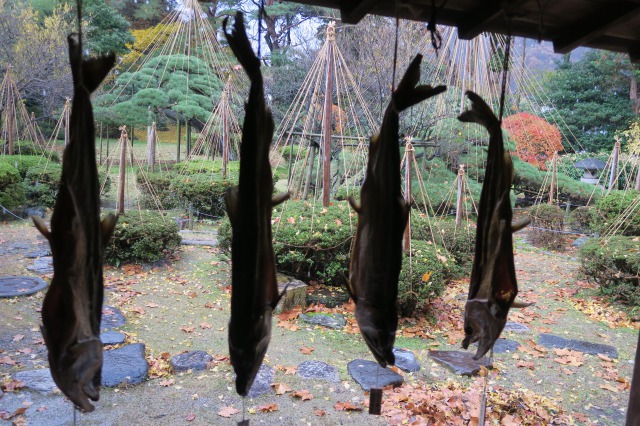 Salmon drying and Amazake trying: A stroll around Murakami 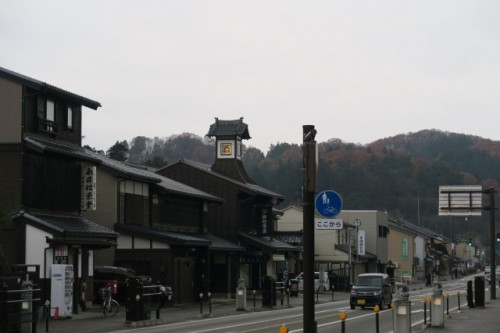 Murakami is an old town, built upon a wealth of tradition, Samurai, a little sake and of course, a lot of salmon. The buildings are clearly archaic in their style and filled with rich culture, but have been well maintained to preserve the rich roots of their heritage. Families live within their shops, people are calm, friendly and welcoming, and the streets are quiet and peaceful. Mixed with the freshness of the breeze blowing in from overseas and you’ve got yourself a serine haven, unlike anything you’ll ever see in Tokyo. 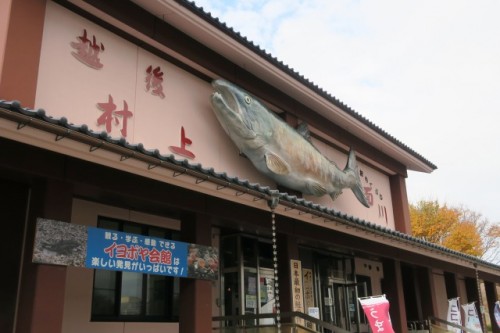 Take a stroll through the process of salmon fishing and preservation, in this highly informative museum, and witness the age old breeding methods right before your very eyes. The museum shows you the process of the egg growth, from youth to their final hatching. 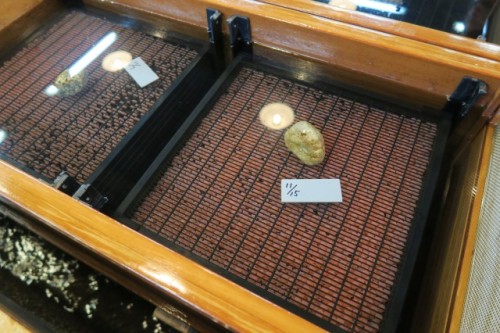 You can also see a few examples of other kinds of fish, crabs and creatures as well as get a look inside the restricted spawning area of Miomote river through glass windows on the bottom floor of the museum. 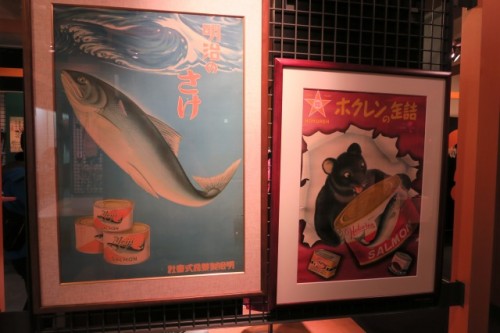 The upper floors hold examples of the archaic boats, the dreaded hook and nets, all of which are still used today. There are even fish drying in the museum and one red coat, some hats and some shoes made from salmon skin. The museum even holds some classes to learn the craft of making clothing from salmon skin. 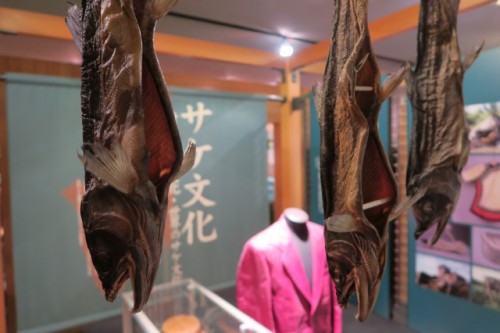 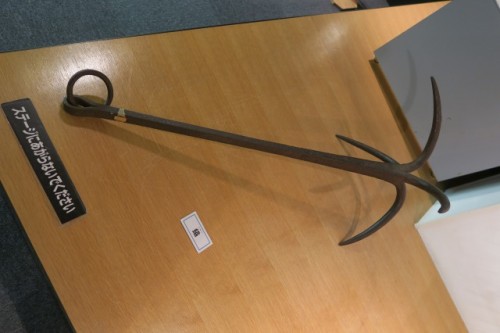 Our third stop on our walk through history was the Samurai, Wakabayashi residence. The smell of firewood and smoke filled our nostrils as we walked through the small entrance, took off our shoes and made our way into the main area. An elderly man was sitting cross legged on the floor in front of what can only be described as a big Japanese fireplace, called an inori. These inori are sunken into the ground, and are only generally used in the winter months to both heat the house and to cook or boil tea. The smoke from the fumes are also said to treat the wood in the house, further protecting it from the damages of rot and small insects. 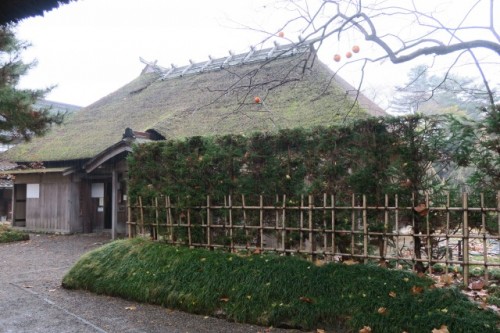 Coming in from the cold and rain to the sights of warm soup over a small fire was sheer perfection. We sat down and watched the man spoon two lots of warm soup and some Konyaku into a bowl and hand it to us. This was my first time eating Konyaku, which they all described as potato. To me, it didn’t have the texture of anything like potato. In fact, the texture was completely unique to me. The outside felt a little soft, but when I bit into it, it broke into pieces. IT was a completely unique experience for me, and I was exceedingly grateful for the warm, smoky soup that soothed and warmed my insides. 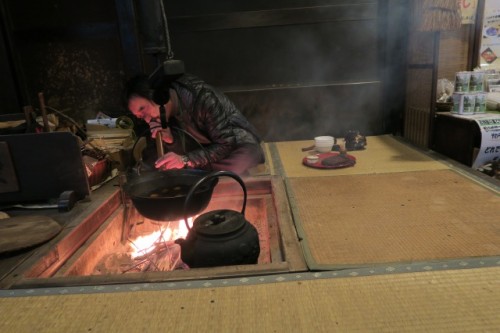 After relaxing there for a while, we decided to explore more of the house. There was a complex of many rooms and even an upstairs, though this was off limits. The rooms were fairly similar and simplistic, but there were a lot of them; perhaps more rooms than I’ve ever seen in one house, and all with different views of the beautiful autumn coloured Japanese garden. The Samurai would stay in each of the rooms, with the whole building itself acting as some kind of Samurai hostel for both the Samurai and their families. 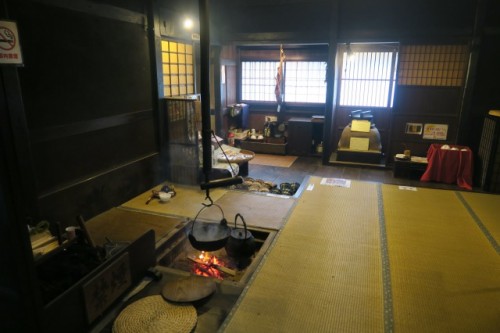 The people of Murakami are dedicated to keeping their traditions in fact and, in such fashion, any slight changes or repairs made to the house are pinpointed using post-it note arrows.

You can cruise around a number of the old residences in the area for ¥1,000 or simply stroll around this one for ¥500. 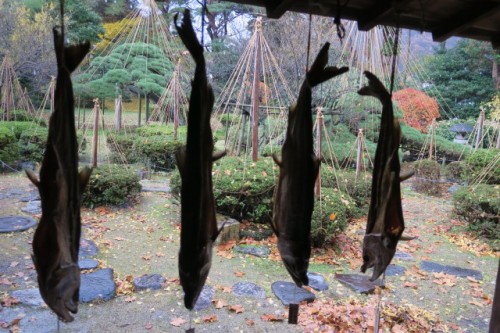 On our stroll through the famously fishy town, we passed rows upon rows of salmon drying outside houses, restaurants and market places, but not quite as many as what we were about to see. 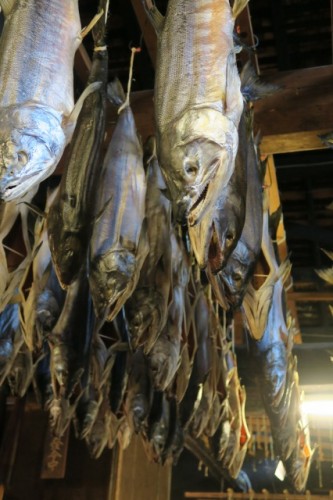 We arrived at a beautifully, large, dark wooden house with, what looked to me like an old fashioned London taxi, sitting outside. Apparently, the outside of the shop had been used for a very famous advert in the past, so it was the prime spot for those people that wanted to recreate that classic shot. 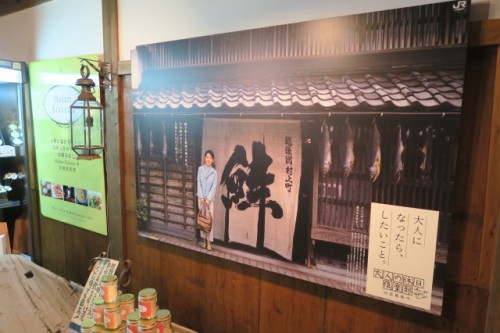 After a failed attempt at that pose myself, we entered and were met by the most beautiful wooden interior, complete with a staircase containing side drawers that I could envision in a house of my own one day. Next to the entrance, was a fireplace, upon which were some small glass bottles sitting in a water bath in a pot. We were told that it was Amazake, a low or non-alcoholic fermented rice drink, which is naturally very sweet and naturally healthy. I was intrigued and we were later permitted to try some. It came in a small sake glass and had the consistency of warm rice pudding. The drink was so sweet and soothing, but did appear very strange to me at first. However, as I drank it, the more solid speckles of rice dropped to the bottom and landed in a clump. I’m not entirely sure how to drink it, but it’s definitely a wildly new and delicious tasting experience that I would highly recommend. 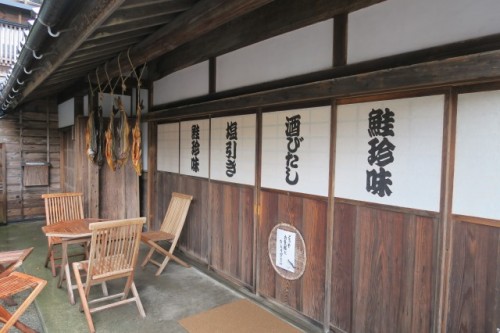 We moved through the shop, filled to the brim with salmon, complete with samples for trying, and went to the back, where we were surprised to see two things. One was the sight of around 1,000 salmon hanging from the ceiling and down the corridor as far as the eye could see. The second, was what seemed to be a families living room right next to us. It turns out, that the family that own the shop actually live within plane sight, right there in the shop. We could even see their family pictures from generations ago.

We were able to talk to one of the chief dryers as well, who told us all about the rice drink and the salmon drying, before then asking me about Britain. It turned out that the car outside belonged to him, and that he was a bit of a British enthusiast. He wanted to try out his English on us too, which meant we were better informed too. 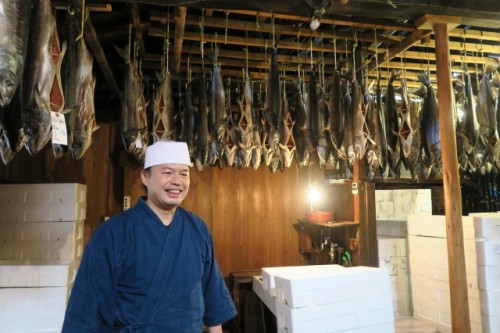 We made our final stroll back to the station, passing a number of monuments and beautifully archaic houses that matched the rest of this old castle town. The autumn leaves were falling in radiant reds, oranges and yellow and the whole landscape shimmered with peace and tranquility. Walking around was definitely a highlight for me, particularly because of the beauty of autumn and the refreshing feeling of the sea breeze. I can’t imagine a better time to go than in autumn. 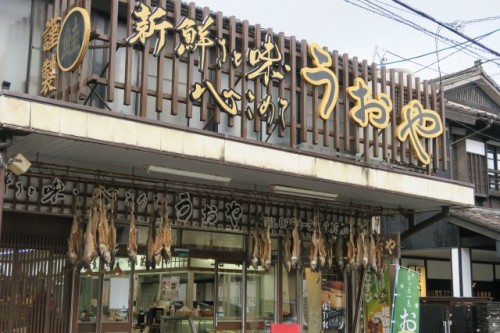