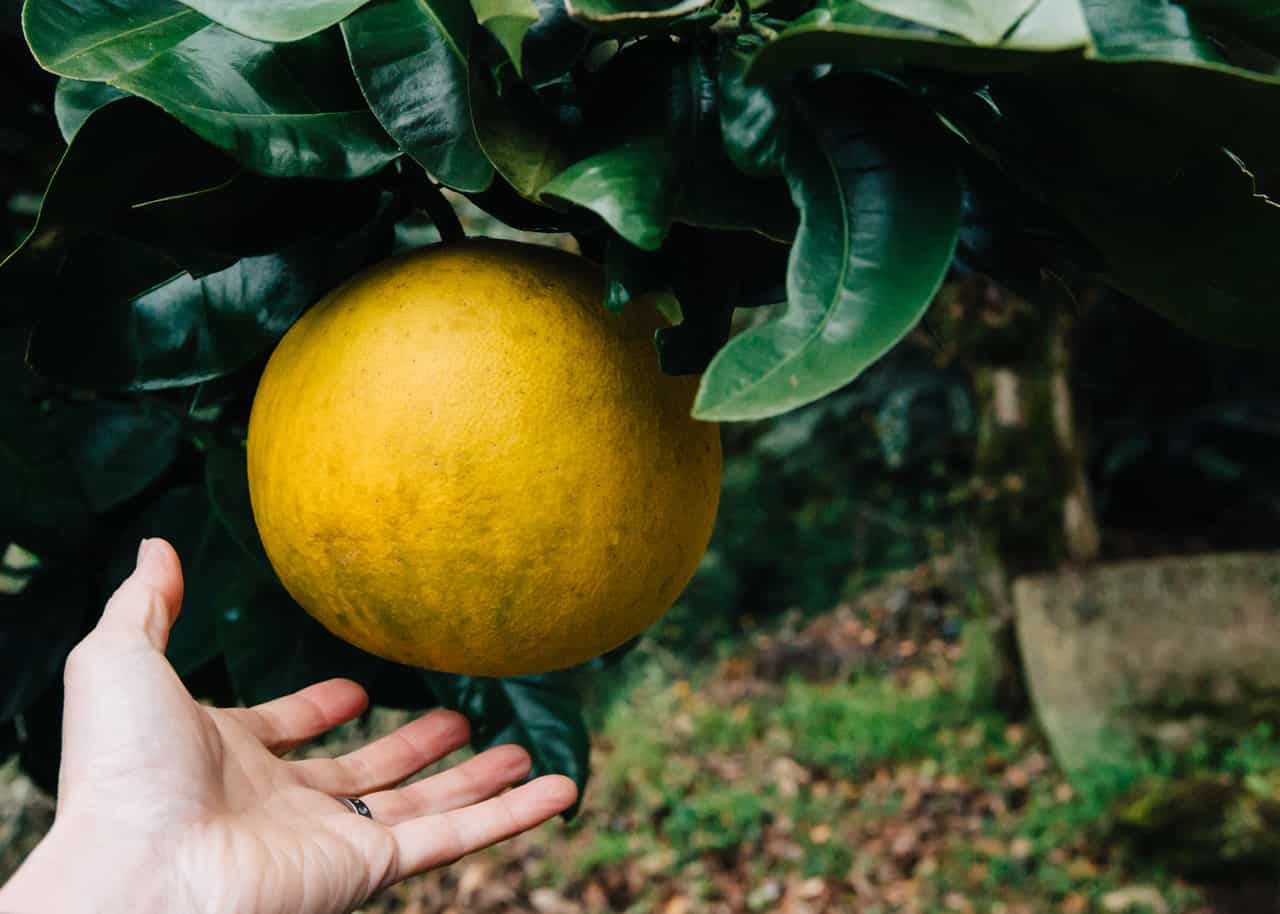 Food and Friendship at Wakabayashi Farm Stay in Yufu City

Using Google Maps to navigate to a destination in Japan is a bit of an adventure in itself. Roads in rural Japan range in width from “narrow” to “is this a bike path?” and Google has no search parameters to help differentiate between the two. So when I chose to navigate from Oita Airport to my farm stay at Wakabayashi avoiding the highway traffic, I knew it was a bit of a gamble. A gamble which took me on some hair-raisingly narrow roads winding through the mountains in complete darkness. It was no wonder I ended up being half an hour late for dinner (and in a cold sweat) when I finally arrived.

But there was Yukio-san, smiling as he patiently waited for me, coming out to the street to make sure I found the house okay and guiding me into a parking spot. And inside the kitchen, Makiko-san had a feast prepared and waiting for us as she greeted me warmly. Yukio-san cracked open two cans of beer and we settled in to enjoy a hearty Oita home cooked meal. 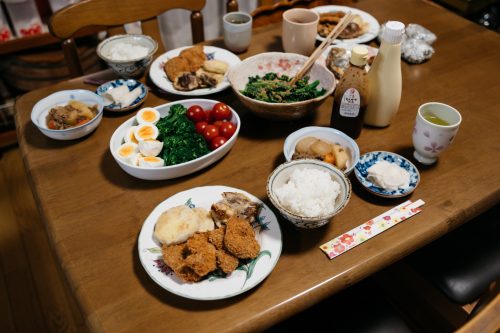 It was a fine homestyle meal put together by Makiko, with some breaded chicken katsu, vegetable tempura, a little beef and vegetable stew, steamed spinach, broccoli, tomatoes and boiled eggs. Too much to eat in one sitting but Japanese cooks excel at using leftovers from dinner for the next morning’s breakfast, often in very creative ways. Though we barely touched the boiled eggs, they returned the next morning as a lovely egg and tuna salad side dish.

Yukio and Makiko have been hosting guests at Wakabayashi farm stay for four decades and Yukio is active in several organizations which allow him to interact with foreign visitors on a regular basis. Guests from over 50 nations have enjoyed the hospitality of Wakabayashi over the years, most of whom leave notes of appreciation in the farm stay’s guestbook.

Yukio-san’s family name is Ono, which can trace its history in Oita Prefecture back to the mid 1500s. At one time, his family owned quite a large amount of land in the area, though what he still owns is quite large, including part of a local mountain. He laughs about the idea of land ownership, telling a story of someone who once offered to “give” him the land rights to a mountain in the area, but he turned it down. Maintaining land in rural Oita can be more expensive than the value of the land itself.

As a man with such a long history in Oita, Yukio-san is full of information about the area and is happy to share his stories with his visitors. Of course, his knowledge goes well beyond Oita history and with a little prodding, you might get him to let you check out his self-proclaimed “man cave” outside the back door. 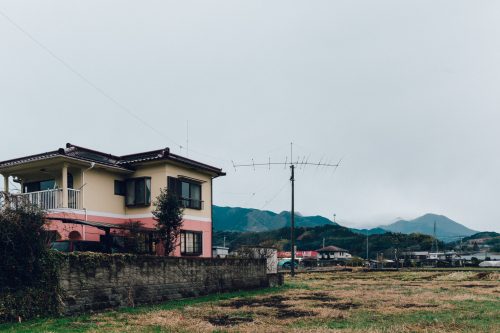 When you get inside, you realize that huge antenna outside the house isn’t for capturing high-definition TV broadcasts. It’s a shortwave radio antenna, a hobby that has become a bit of an obsession for Yukio-san. He showed off his substantial collection of antique shortwave “ham” radios, all returned to working condition after he lovingly repaired them. Rotating the antenna a bit, we picked up a brief broadcast coming from Iwakuni, near Hiroshima, a few hundred kilometers away. Yukio-san has conversed with ham radio operators all over the world, picking up bits of their languages along the way. We thumb through a book of postcards sent from operators all over the globe, including his prized signed card from a conversation he once had with James Irwin, who piloted the lunar module on the NASA Apollo 15 moon landing mission. 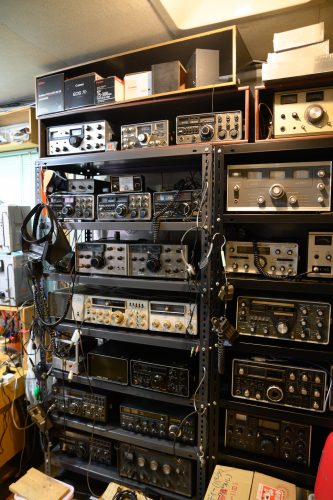 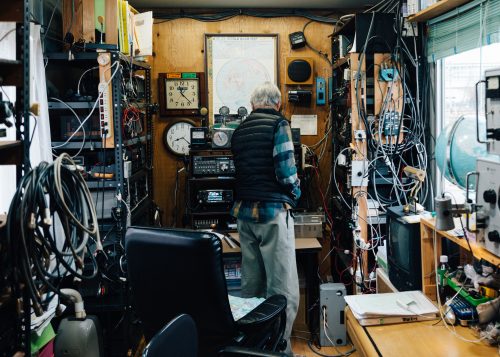 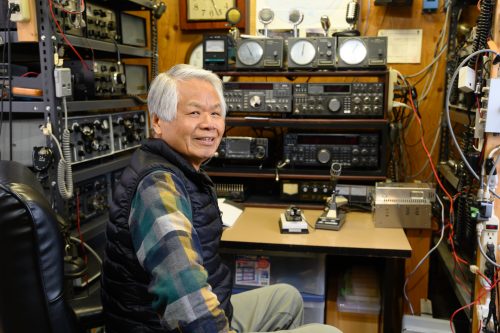 Indeed, many of Yukio-san’s life experiences are based on his love for meeting new people. We talked about his surprise meeting and conversation with a gentleman hiking in the mountains who happened to be the Emperor’s son’s father-in-law. And how his friendship with a visiting Iranian professor spawned a visit to Iran where he received a gift from the President of Uzbekistan and had an extraterrestrial encounter in the dark of night in the middle of the Iranian basin (it’s a story you’ll have to hear from him to believe!).  When you think you’ve heard everything, he’ll spin you another tale from his life that will blow your mind. Yukio-san is the real-life, Japanese Forrest Gump.

Wakabayashi is actually two separate houses, the house Yukio-san grew up in and the one he lives in now with his family. The original Ono house is where you will stay, a traditional style country house with spacious rooms and a real onsen bath (the water comes directly from a local hot spring). Due to its unusual brownish color, Yukio-san jokes there is coffee in it. It is a little disconcerting to have the hot water come out of the tap looking dirty brown, but the water has been tested long ago and is safe for consumption or bathing. It is a very soft water and leaves your skin feeling baby smooth. Sorry, it doesn’t taste like coffee though! 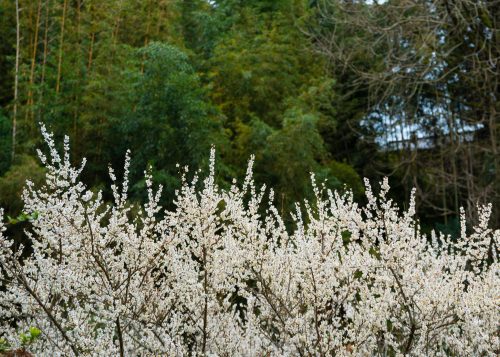 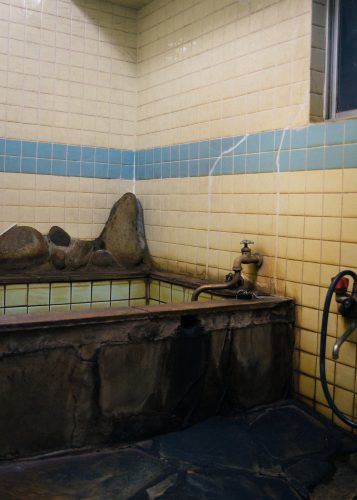 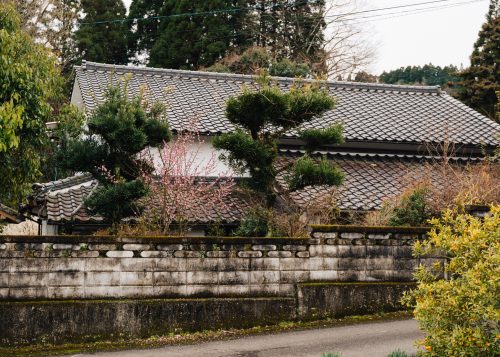 Because of the cold snap that was hitting Japan during my stay, Makiko-san prepared a bed for me with a heating pad and several layers of warm blankets. There is also a heater/air con unit in the bedroom, but the bed was prepared so well I honestly didn’t need it until it was time for me to get up and leave the comfort of the warm bed! Unlike many Japanese guest houses, Wakabayashi provides beds to sleep on, though I suspect they also have futon for those who want the experience of sleeping on the floor.

It should come as no surprise that Yukio-san’s outgoing personality has earned him many friends in his community. With a quick phone call, he arranged an impromptu activity for me: a bamboo weaving experience led by his friend, Mihara Keiji, a local bamboo artisan. Keiji-san and his wife Moe have a company called Shochikudo which manufactures and sells handmade bamboo baskets made by the couple. Shochikudo serves the dual purpose of carrying on an important traditional handicraft of Oita while at the same time making sustainable, natural good for things people typically buy made from synthetic materials. Bamboo grows in abundance in the Oita countryside and if it is not maintained through cutting and thinning, it becomes invasive into the farmlands.

The Miharas are not originally from Oita, but came to Oita to learn the art of bamboo weaving. Not only are they skilled artisans, they lend their expertise to teaching others the craft. You can check their Facebook page for future events where you can participate, though I was fortunate enough to get a one-on-one lesson with Keiji-san. 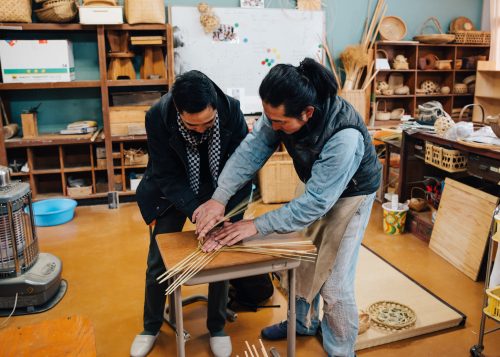 Keiji-san taught me to make a simple basket called “Four Waves” after the shape of the curves that make up its sides. There is no glue, staples or ties involved; it is all just weaving that holds the basket together. After we finish the basic shape, Keiji-san simply checks the bamboo for cracks or breaks and trims the excess material away. 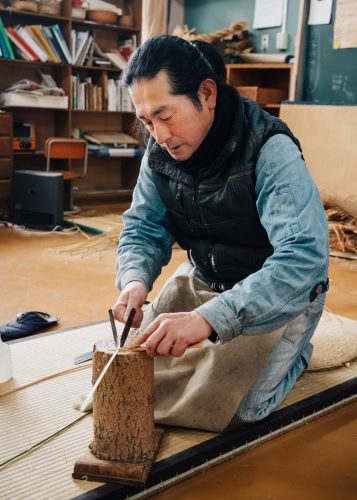 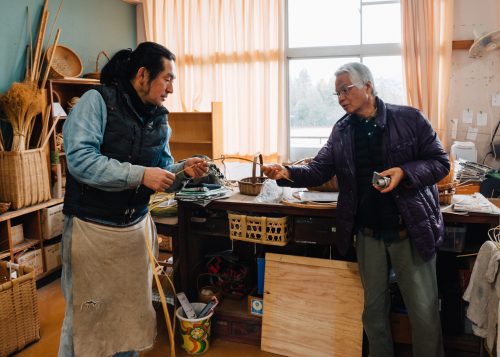 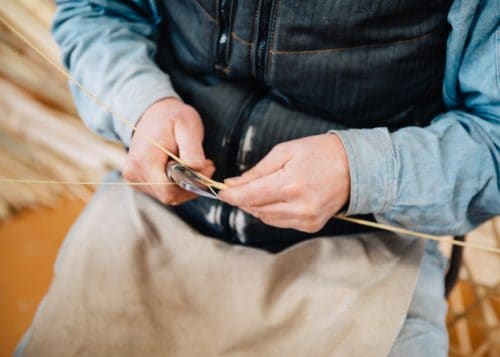 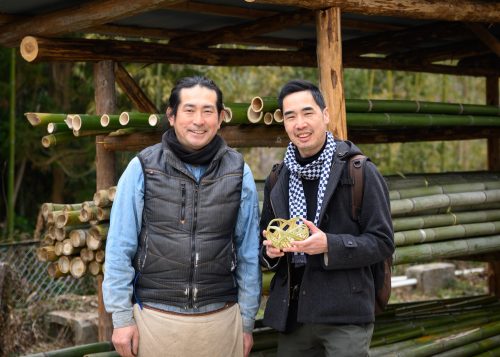 Since it was the off-season for farming, I could not participate in the typical activities of a Wakabayashi farm stay like helping with the rice harvest or picking fruits and vegetables. Instead, Yukio-san graciously took me on a guided tour of  Yufu city, visiting the hot springs towns of Yufuin and Yunohira, driving up into the hills to a view of Mt. Yufu and the town below, and out to a unique natural spring where the water is not only mountain pure, but also comes out naturally carbonated (you can buy water here in quantity, but you can also just taste it for free).

You might wonder if it is a waste to do a farm stay experience during the off season, but in my opinion, it isn’t a mistake, but rather an opportunity to focus on another aspect of farm stay: the relationship with the owners. Though I wasn’t working on the farm this time, I still had ample time to talk with and build a friendship with my host family. Over meals and during the car rides, we had plenty of time to chat, learn and laugh. I left Wakabayashi with new friends in Yukio and Makiko and that is not just a memory for me to cherish, but a living relationship that I can continue to cultivate through communication and social media.

As noted, you will probably need a rental car to discover Yufu city from Oita airport or one of the larger train stations in the area including Yufu station. Being a rural area, train travel alone is probably not the most convenient way to get around. Overall, it took a little under 3 hours from Tokyo: a 1.5 hour flight, a little over an hour’s drive and some transit time to the rental car shop.

Wakabayashi can host up to three people and farm activities vary based on the time of year you choose to stay. If you wish, they will pick you up at Yufu station. It is also conveniently located near the beautiful natural landscapes of Mt. Yufu and several onsen areas including  popular Yufuin, nostalgic Yunohira Onsen, and unique Nagayu Onsen.