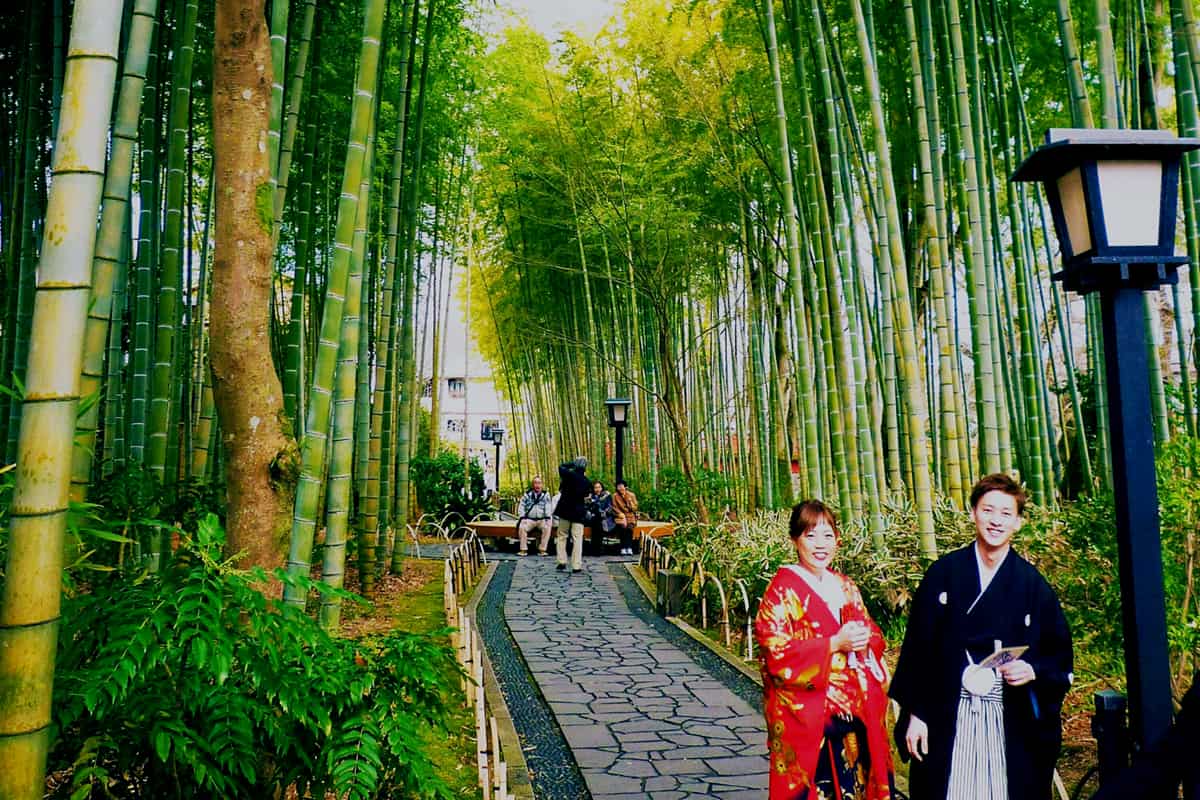 Partially hidden among hills and mountains in the Izu Peninsula, a small, charming onsen town awaits discovery: Shuzenji. Traditional hostels, modest bamboo forests and fairytale bridges embellish the beautiful village. If you are not really one for dreamy aesthetics, then you might, hopefully, be charmed by Shuzenji’s intriguing history. Back in the day, Edo’s shogun city, Tokyo, was known as Koedo (‘Little Edo’). Similarly, some 1000 years ago, towns whose aesthetic imitated that of the capital city were named Shokyoto—’Little Kyoto’.

Our trip across Shizuoka has now taken us to Izu. Specifically, to Shuzenji Onsen, a memorable ‘Little Kyoto’ filled with hot springs. Let us show you the wonders of this enchanting little onsen town!

On our way to Shuzenji

Our journey took off at Atami, the starting point of our Shizuoka trip. Pay careful attention to the coach you board: Odoriko-go’s trains are divided in two and and they part ways at Mishima Station. Once in Mishima (the next station from Atami), half of the train travels to Shuzenji, while the other one moves on to the very limits of the Izu peninsula, to Shimoda. Keep in mind that JR Pass does not cover travel between Mishima and Shuzenji, as that stretch is operated by another company. Rail Pass  holders will be charged ¥500 for this trip.

You will need to board the last coaches (from the number 11 onwards.) If you look down, you will see detailed signs painted on the ground. These indicate both coach numbers and the destination of that specific car. 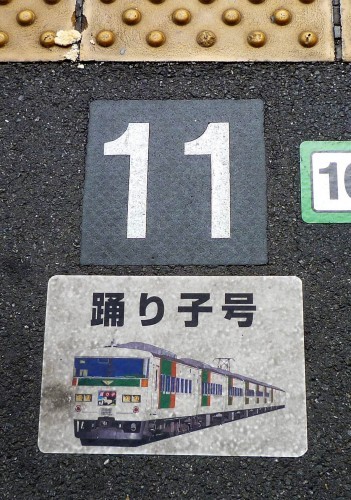 Once the train arrived at the station, we were able to appreciate up-close just how robust it really looks. It is as if it came straight from the past. Some of the trains used on this line are modern and up-to-date, but older versions from 1981 are still in use. 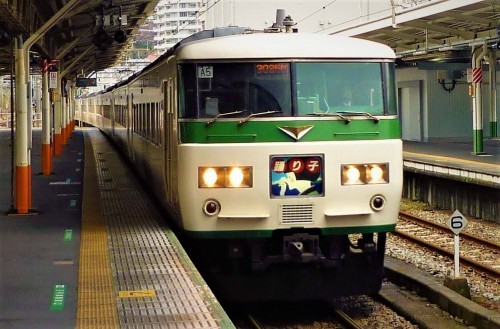 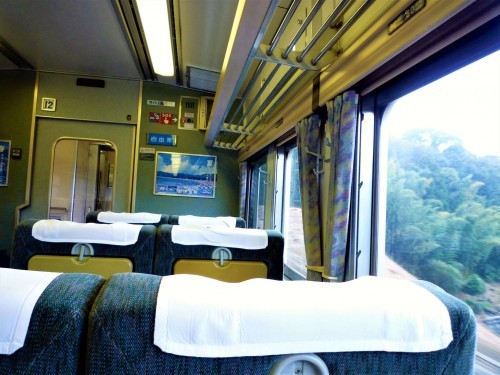 Once we stepped inside, we found ourselves back in the ’80s. But the trip ahead of us would take us even further back in time.

We exited the train at Shuzenji Station and walked towards the nearby bus station. Stop number 1 was the one we needed. 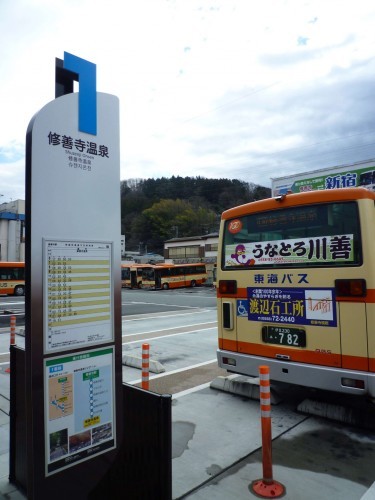 15 minutes later we finally arrived at Shuzenji. Its old paths and roads, once owned by members of the Minamoto clan, transported us several centuries back in time. These lords established the first shogun government in Kamakura. For the first time ever, Japan’s political powerhouse was moved to the eastern region of the country.

It did not take too long for us to run into a torii gate. Just minutes after arriving in Shuzenji, we came across the gate to Hie, Shuzenji’s Shinto temple. 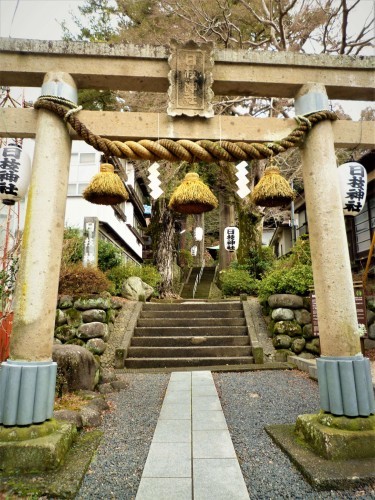 Only a few steps separated us from the Buddhist temple from which this town got its name. This place is believed to be the first temple where Kukai —an influential monk posthumously known as Kobo Daishi—began his preaching endeavors. In the 19th century, Buddhism was already largely established in the Kyoto region, and was quickly spreading towards the east. 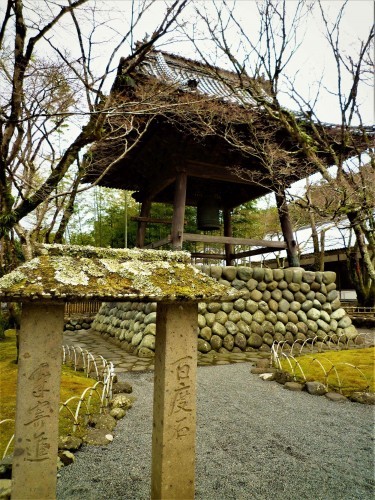 Kukai’s name showed up plenty of times during our walk through the temple. Before leaving, we made sure to take our time to appreciate the garden and the many architectural and sculptural wonders found inside before leaving. 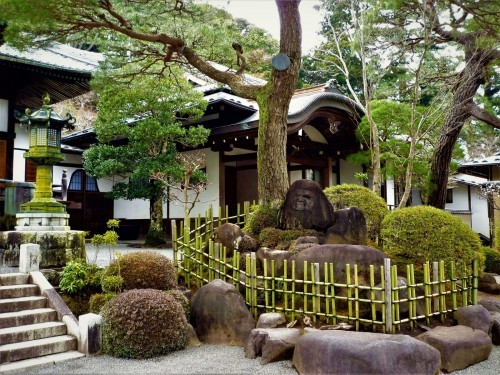 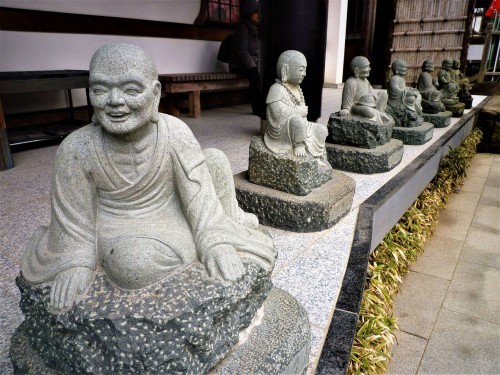 English, Chinese, Korean and Spanish speakers will be able to read about the town’s history, as there are informational  signs in each of these languages placed in certain areas. 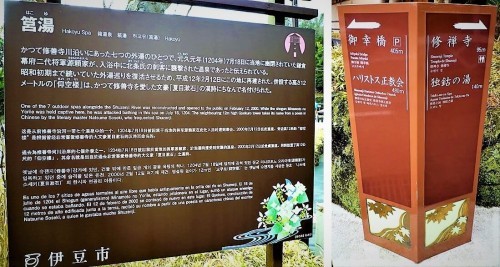 A walk among hot springs

Hot springs are everywhere in Shuzenji (but unfortunately, I had no time to enjoy them.) Some of these onsen are truly remarkable, even from the outside. Let me highlight Hakoyu Onsen, whose tower definitely does not go unnoticed. 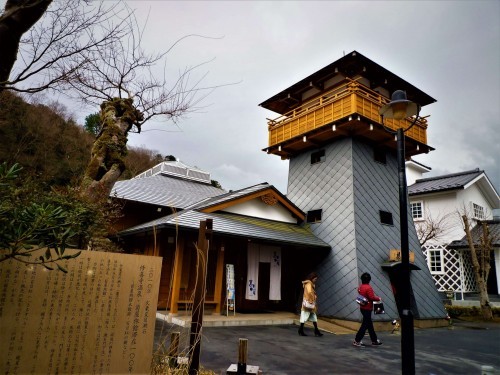 Modernly constructed, this onsen imitates an old hot spring that was once located in the same spot. It is famous for having been the setting of a prominent historic event. In 1204, the then-shogun Minamoto no Yorii was the target of an enemy attack while taking a bath here, an event which ended in his death.

Tokko no yu, an open-air onsen, is another spot with a fascinating history. This hot spring is just a little pool which emerged next to a river a long time ago. It is now covered by a colorful pergola and surrounded by a wooden fence. In a way, this primitive hot spring ‘gave birth’ to the city. 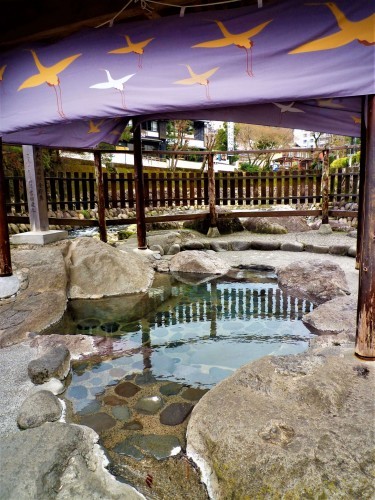 Kobo Daishi makes a stellar appearance here. The story goes as follows: the monk was meditating here one cold winter morning when he saw a boy washing his ill father in the freezing waters of the river. Deeply moved by this sight, and compassionate as he was, Kukai hit a rock with his tokko—a metallic stick—breaking it into pieces. Warm water emerged from the crack, creating the hot spring we see today. 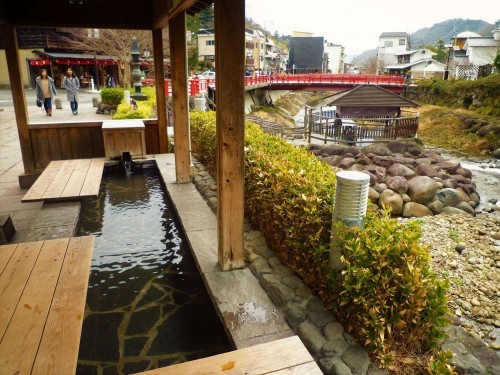 Visitors can sink their feet into the warm water of this onsen.

A short walk, a million views

Shuzenji is definitely not a big town. However, the scenery changes completely every step we take. Following the river upstream we arrived at the famous red bridges: Katsura (named after the river) and Kaede. The river and the vegetation around it make it look like we are miles away from civilization. 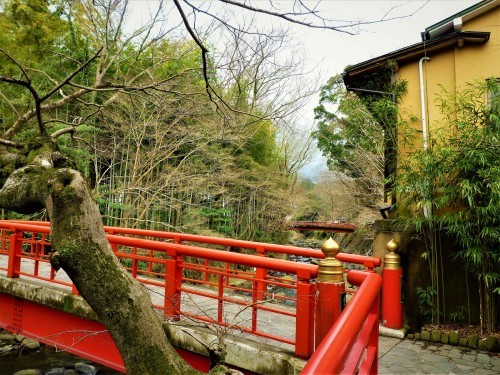 Time seems to stop walking among Shuzenji’s tall bamboo trees. Chikurin no michi (literally ‘path in the bamboo forest’) is the perfect spot to take a picture of yourself in a kimono. At least that is what the couple from the following picture—who were being interviewed by a TV crew—stated. 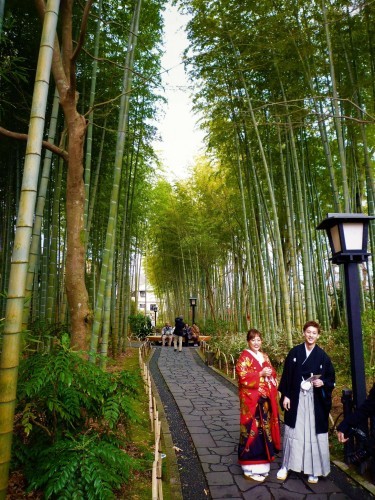 Once outside the town, we kept walking all the way to the grave of Noriyori (son of Yoshimoto, from the Minamoto clan). Like his brother Yoriie, he also died here. Noriyori was victim to a political/family misunderstanding that ended tragically for him. 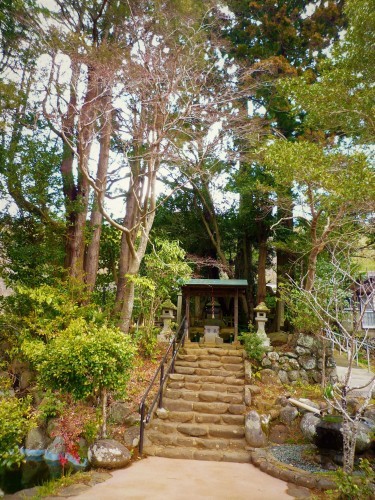 Before leaving, let us try some local food

There are many other attractions in the area, such as temples, parks and even Yoriie’s grave. But we had no time and… we were very hungry. So, we decided to try some specialty soba at a local restaurant. 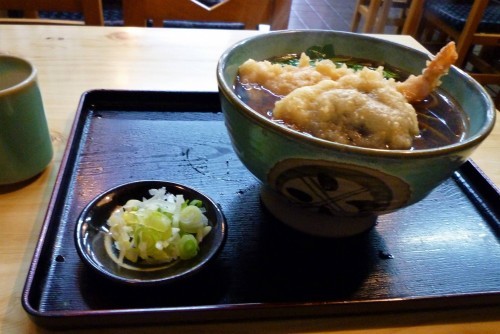 Soba can be enjoyed year-round. Warmed, and topped with vegetable tempura, it is the perfect meal for a cold, February morning. On hot summer nights, you can alternatively enjoy it sunk in cold iced soup.

Once we filled our stomachs, we headed back to the station. We did not have enough time to see the mountain observatories, famed for their exceptional views of Mount Fuji. But there are more many places for us to discover in Shizuoka, including a spot very, very close to the sacred mountain… Stay tuned!