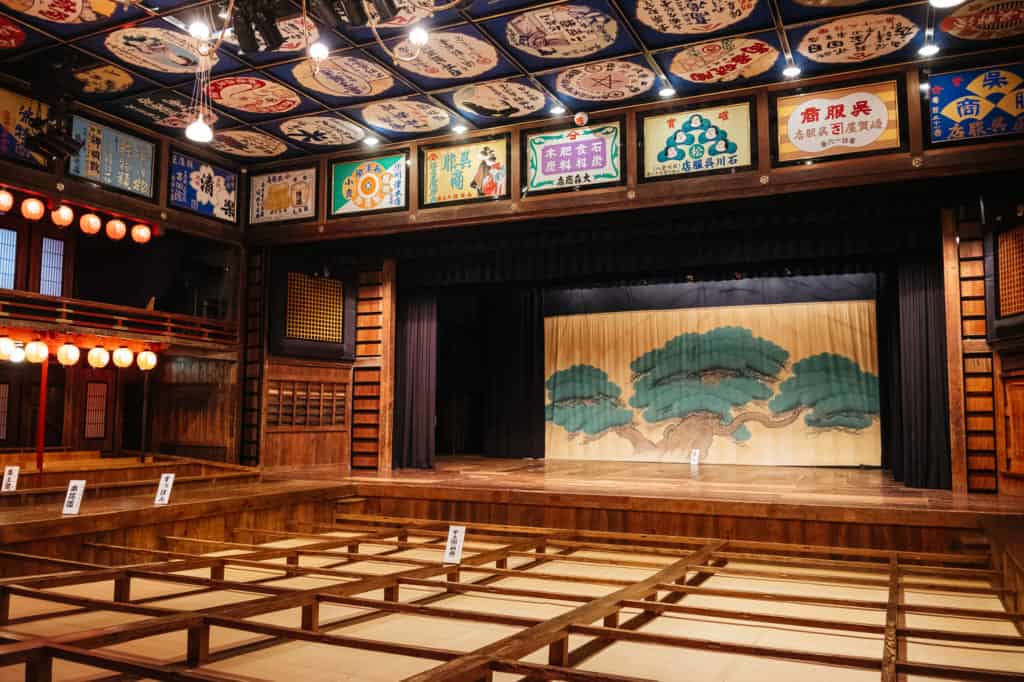 A Theater and Show Preserving the Past in Yamaga, Kumamoto

Some say the beauty of Japan lies in the way it attempts to balance the reverence of its deep history with the progress of modern times. You witness the contrasting natures of Japan juxtaposed in the ads plastered in train stations, in the kimono-clad ladies absorbed in their smartphones, and often in the Japanese countryside, where long practiced traditions are carried on by people who place great value in the past.

Watching the synchronized movements of the performers of the Yamaga Tourou (Lantern) dance on the stage of the Yachiyoza Theater reminded me of that balance between Japan’s past and present. Here was a classic dance being performed in this majestic theater which had an over 100-year history. Both the dance and the theater are reflections of Yamaga’s history, faithfully carried on by its modern residents.

The Rise, Fall, and Resurrection of Yachiyoza Theater

Yamaga is a small city in Kumamoto Prefecture that prospered over 100 years ago when it thrived as a center of commerce and an onsen hot springs resort area. It was at that time Yachiyoza Theater was constructed, taking advantage of the growing popularity of the performing arts among the common people of Japan. Its premiere performance was kabuki, but over the next 50-plus years, it hosted a variety of entertainment, from live concerts to movie screenings.

Yet, as the people’s taste in entertainment changed, the theater’s popularity faded. It temporarily closed its doors in the 1970s before a group of local people rescued and renovated it. Eventually, they managed to have it designated as a national important cultural asset in 1988, protecting it for the future. Today, the theater is the venue for a wide variety of entertainment, including the dance performance I came to enjoy.

I visited the theater not only for its performance of the Yamaga Lantern dance but also for its historical significance to Yamaga city. On days in which there are no performances, you can still tour the theater, either on your own or with a Japanese language tour, with an English handout provided. What you’ll discover about the building itself might surprise you.

Though Yachiyoza Theater was built in 1910, its structure is modeled after a Kabuki house from the Edo Period, and the atmosphere is undoubtedly reminiscent of that time. Hand-painted advertisements adorn the ceiling panels, and the main seating is tatami mat floor separated by low wooden rails. Balcony sections along the sides are lined with low wooden benches, offering excellent views even for those in the “cheap seats.”

Despite being a small theater, the builders of Yachiyoza Theater equipped it with state-of-the-art technology for the early 20th century. Go under the stage to view the rails on which the stage revolved, allowing a second scene to be prepared in advance without interrupting the performance.

Also below the stage, a stage lift carried actors up from the trap room. This device was commonly used when characters suddenly appeared in performances, such as spirits or ninja.

The theater represents the best of traditional Japanese design and Western advancements in theater arts available at the time. Kametaro Kimura, the amateur architect responsible for building Yachiyoza, studied various theaters throughout Japan and traveled to Shanghai to also learn about the Western style of theater design.

Nearby Yumekogura is the museum containing many artifacts from the theater, including performance posters and flyers, costumes, and props. It was repurposed as a museum from a former storehouse constructed in 1887. Being able to see the tangible history of Yachiyoza helped me to appreciate the cultural significance of the theater.

Against the backdrop of colorfully lit paper umbrellas, two kimono-clad dancers perform the traditional Yamaga Tourou Dance. The delighted audience clap along with the rhythm of the song, first sung in the Meiji era.

The dance is typically performed during the annual summer festival in Yamaga on August 15-16, a celebration of lights punctuated with hundreds of lanterns, a spectacular fireworks display, and a dance troupe of 1,000 female dancers.

Because not every traveler can attend the festival, the dance is performed at the theater several days per week, with one or two performances per day, from October to March.

*Closed every second Wednesday of the month and Dec. 29 to Jan.1.

The best way to experience Yamaga is by car. Having a car, you can easily visit popular destinations like the theater, tea plantations, ancient shrines and the plentiful onsen hot springs. Rental cars are available from areas around nearby large cities like Fukuoka or Kumamoto or near the airports and Shinkansen stations. Driving times from major cities:

From Fukuoka city: about 1 hour 10 minutes

From Kumamoto city: about 1 hour

From Oita city: about 2 hours and 30 minutes

If you don’t have a car, the next best thing is a free shuttle bus service offered by Kumamoto Prefecture. This shuttle service serves 4 cities and towns in Northern Kumamoto: Tamana, Nagomi, Yamaga, and Kikuchi. Details can be found on their website or download the PDF.