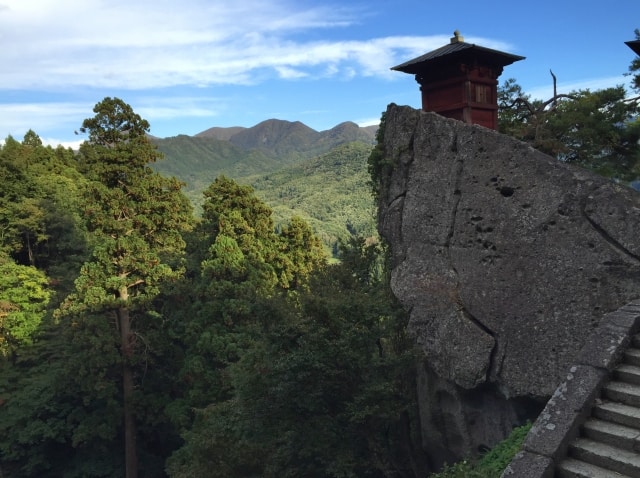 Yamadera- A Brief Look at the Natural Beauty of Yamagata

Where is Yamadera “Mountain Temple”? 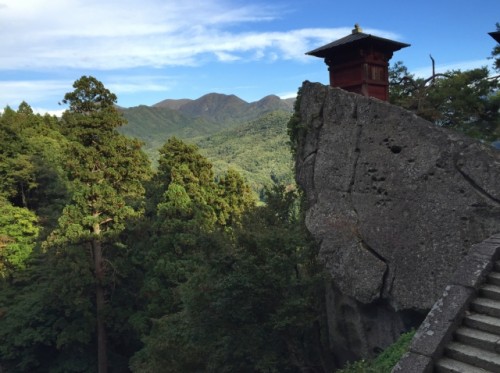 The area of Northern Honshu known as Tohoku is not always the first destination in mind for the tourist new to Japan. The mountainous region north of Kanto, from Fukushima all the way up to Aomori, may lack some of the glamour of Tokyo or Osaka, but makes up for it with its scenic beauty. Tohoku is particularly known for many of its beautiful temples and shrines. Due to their remoteness, they possess a certain calmness and serenity that is sometimes lacking in the more well-known cultural treasures farther south. Within Tohoku you have the Prefecture of Yamagata, the next door neighbor (or possibly little brother?) of the more populous Miyagi. This mountainous region is known for its delicious cherries, wonderful onsen (Japanese style baths), and gorgeous temples. One such temple is Yamadera.

Yamadera (in Japanese: 山寺) which means, quite literally, mountain temple. More specifically, Yamadera, also known as Risshaku-ji, is a series of temples first opened in 850 AD that was frequented by artists and Emperors alike.  Why such a big deal? Maybe because the place in question looks like this: 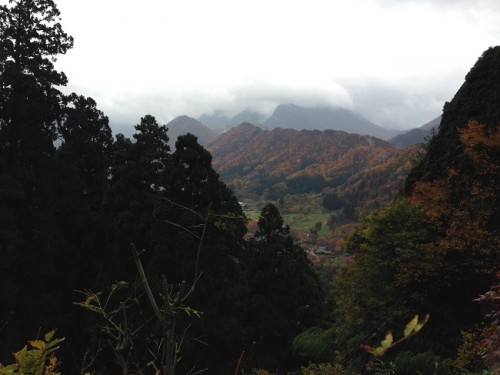 Nowhere to Go But Up!

I went here in November, right before the end of what is referred to by locals as “Koyo,” the time when the fall colors really bring out the beauty in the land. Though the first snow had yet to fall, I was greeted instead by an intermittent pattering of rain. It gave a misty quality to everything I saw. From the time I left Yamadera station, I could see much of the rural charm of the area around the temple, with nary a McDonalds to be found: 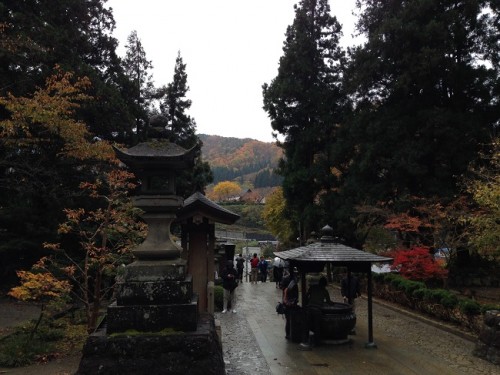 After a short walk to the temple, I could see right away that this would be a hike. True to the name, to get to the temples, you had to climb the mountain. The early climb was rather easy, and gave an immediate reward:

A Rather Roomy Retreat at Yamadera 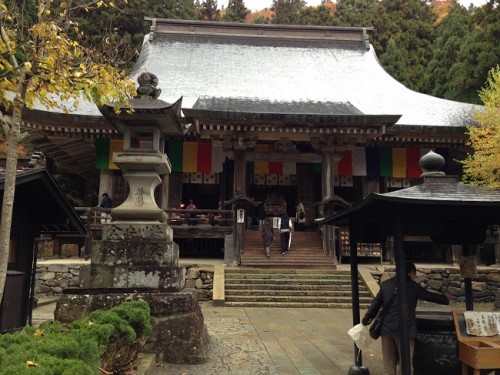 Just past the “Sanmon” (Mountain Gate), and the beginning of the journey.

Though Japan is known as a rather small country where space is often in short supply, such is not the case here: the temple grounds encompass a vast region and visitors need not feel cramped as they view it. Many of these temples were used as training places for Buddhist monks, and even those not religiously inclined can enjoy them. 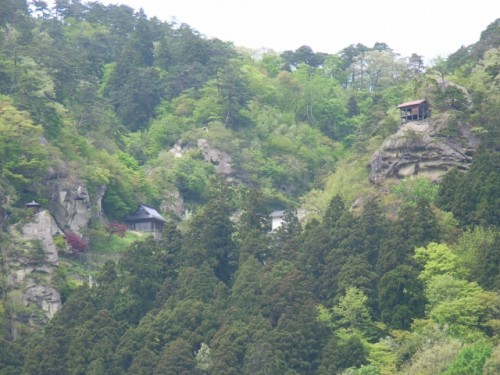 And Farther up The Winding Stair

After viewing one temple, it was time to move onto the next. There are many things to see at Yamadera, such as the famous Basho statue (after the famous poet), and the Hie Shrine (where a festival is held in May). Yamadera not only includes these old structures, (some from as old as the 1300s!) but also the homes of the caretakers of the place. Though tourists are not allowed in, it seems that one home had a few visitors anyway: 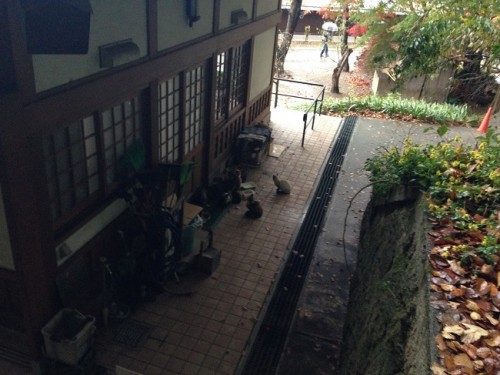 As I climbed father and farther up the approximately 800 stone steps, the view of the town below also became quite striking. At Yamadera, one need not be rushed, though the stairways can be a little narrow as they wind around the mountain. 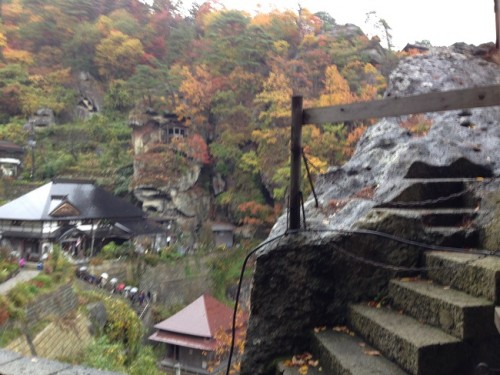 The Steep Staircase up to Godaido

Braving the rain, I continued up, passing by rows of stone lanterns, as well as what appears to have been ancient grave markers. It had a somewhat otherworldly and spiritual quality, so long as I ignored the man with the selfie stick behind me.

The Room with a View

When you finish your hike up the mountain, there is an observatory called “Godaido” which gives a fantastic look at the scenery below. Though it doesn’t take too long to get from top to bottom, I felt satisfied enough to treat myself to a delicious soba lunch in the town. For those who want to stick around longer, you can also check out the Yamadera Basho Memorial Museum. It is dedicated to the Haiku Poet Basho, who was especially fond of Yamadera, and whose statue is located on the grounds. 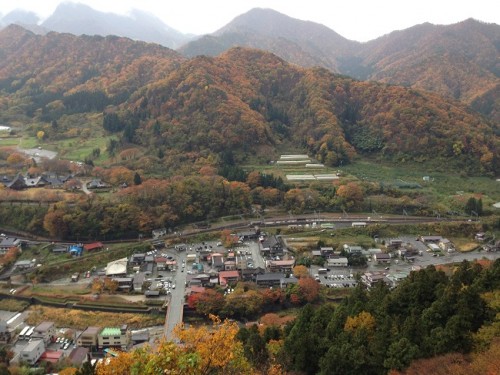 View from the Top

Yamadera can be a wonderful day trip for the traveler who wants to see as much of Tohoku as possible. It can be easily accessed from Sendai station, and can be enjoyed any time of the year. Why not check it out for yourself? Happy travels! 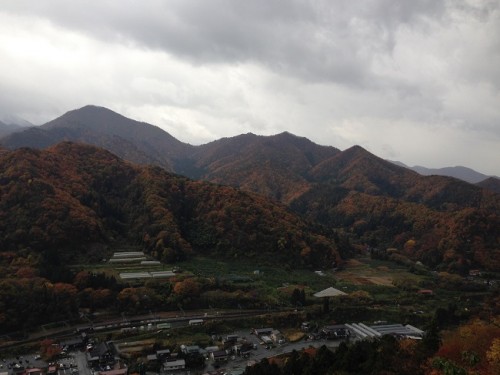 JR Senzan Line from Sendai to Yamadera Station (About 50 minutes)