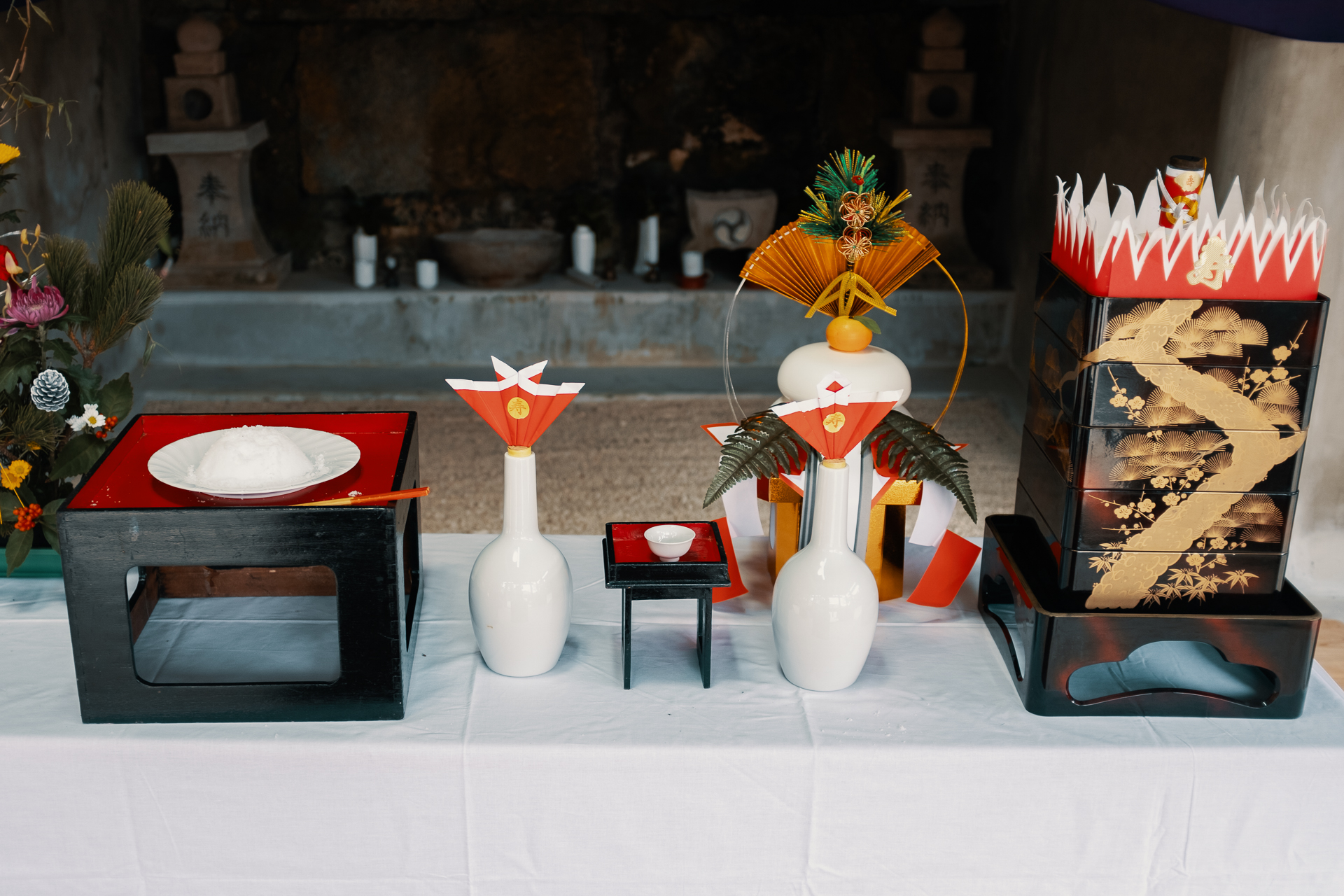 When my mother decided to visit me in Japan at the end of the year, she asked for one thing: that we could go somewhere that would not be too cold. I immediately told her that it was very easy, we just had to go to Okinawa!

It was the first time I traveled to the Ryukyu islands (琉球) and I had to plan the itinerary for this two-week trip and to find the best places to spend the new year. After visiting the island of Okinawa (沖縄), we went to Taketomi Island (竹富島) where I booked a room in a minshuku (民宿). A quiet New Year’s Eve on a small island lost in the middle of the Pacific Ocean in company with our Japanese hosts. Did I make the right choice?

Taketomi Island is located off Ishigaki Island (石垣島), in the south of the Ryukyu Archipelago. It takes around 15 minutes by boat to reach the island from Ishigaki port. With its 5km², Taketomi is a very small island mostly covered by fields and forests, and the last census counted 351 inhabitants in the small village of the island.

The Ryukyu Islands have not always been part of Japan. The Ryukyu Kingdom was independent until its annexation by the Japanese Empire in 1879. Therefore visitors coming to the Ryukyu Islands can discover a very unique culture. What makes Taketomi Island different from the other Ryukyu locations is its very well preserved architecture that cannot be found anywhere else in Japan. From time to time, you can come across buffalo-drawn carts, a traditional transportation mode in ancient times that became one of the island’s touristic attractions. It gives even more charms to these traditional dirt streets lined with stone walls protecting the village’s wooden houses with red roofs.

The few small cars seen on the island are mainly used by owners of the guesthouses to pick up their clients at the port. The island is so small that you can easily go everywhere on foot, but renting a bicycle will give you complete freedom that becomes even more pleasant by the absence of cars in the streets. Once we get our rental bicycles, we straightly went to the beaches of Taketomi.

A Dip in the Ocean on the New Years Eve

The beaches of Taketomi are paradise: white sand, turquoise water, calm and shallow sea… A haven of peace featuring a treasure of biodiversity: star sand. If you give a close look at the sand, you should find some star-shaped grains of sand. But this sand is actually made of tiny endemic organisms that can be found only in Okinawa Islands, especially on Taketomi Island and Iriomote Island (西表島).

We decided to spend the holiday season in Okinawa to get away from the winter cold, but I didn’t expect such a mild climate. When I dipped my feet in the ocean, I was amazed to find out that the water was not cold at all. When I talked about it with our guesthouse owner, he offered to lend me a mask and a snorkel and challenged me to swim in the ocean. I don’t normally have the chance to dip in turquoise waters on New Year’s Eve, so I decided to take up the challenge!

That day, the sky was cloudy, and I had to put a small jacket over my t-shirt. That’s probably the reason why I immersed myself very easily in the salty waters of the ocean that felt almost warmer than the air. But talking about a dip is very exaggerated. No matter how far I went, the water was still under my knees… I decided to put on my mask and my snorkel anyway and look under the ocean while I tried to swim in these shallow waters.

Refreshed by this unexpected swim, my body and my soul purified before the new year, I decided to stay on the beach a little more to admire the sunset from the shores.

Minshuku is the Japanese equivalent to our guest houses. Usually, a minshuku will not have all the amenities and all the comforts of a hotel room or a ryokan. Still, a stay in a minshuku gives you the chance to be as close as possible to the locals and to experience the daily life of Japanese people. And that was exactly why I decided to spend the New Year in a minshuku, with the hope to celebrate New Year’s Eve with Japanese people and in their own way. Because in Japan, the New Year is not made of fireworks and alcohol. It is a very traditional event spent with the family, so spending New Year’s Eve with a Japanese family gave us the unique opportunity to taste these traditions.

We were not the only visitors of the minshuku that night. Three Japanese women joined us to share the delicious dinner our hosts prepared for us: a myriad of small local dishes made with products from the island, including a delicious papaya salad. The indispensable New Year’s mochi (餅) could be found in a small bowl of broth, and the dinner ended with a bowl of soba, or toshikoshi soba (年越しそば) to be specific, the “year-crossing noodles”. These thin and long Japanese buckwheat noodles are a symbol of longevity and part of the traditional dishes of the Japanese New Year to bring luck for the coming year.

After the dinner, our hosts joined us to share the last hours of the year with us. The television was turned on the Kohaku Uta Gassen (紅白歌合戦), a musical show that has broadcasted on new year’s eve for over 65 years. Very much followed during this special evening, it became what we could call a kind of a modern tradition for the Japanese New Year.

We enjoyed this pleasant atmosphere together until midnight, eating some snack foods, including puffed rice balls, dried fish bones, and other Japanese snacks. At the same time, we tried to communicate despite the language barrier. A simple but enriching moment that will stay engraved in our memories.

The countdown started on the television, and it was the beginning of the new year. We wished each other a happy new year in Japanese: shinnen akemashite omedeto gozaimasu! (新年明けましておめでとうございます) Then it was finally time to go back to our room and to spend a peaceful night on a comfortable Japanese futon.

Visit of the Temples of Okinawa on the New Year

On January 1, Japanese people visit a temple or a shrine. This first visit of the year to a spiritual place is called hatsumode (初詣). Some go at midnight, at the end of the 108 bell chimes ringing in the Buddhist temples on the evening of December 31. The other three visitors at the guest house invited us to join them on their visit to one of the island’s shrines in the morning. Offerings had been placed in the shrine, and our friends explained to us how to pray.

A last stroll on the island led us to the beach, where some fishermen were patiently waiting for the first catch of the year. It was time for us to leave this peaceful island where we had the chance to share the Japanese New Year traditions thanks to the kindness of the people of Taketomi Island.

A short boat ride brought us back to Ishigaki island and the vibrant atmosphere of a small city. People were crowding around the temple to pray and to draw an omikuji (おみくじ). Omikuji are small pieces of paper containing predictions about your future. It is possible to draw omikuji throughout the year in temples and shrines, but on the New Year, everyone wants to know what their year will be made of. An omikuji can be auspicious or much less pleasant. But never mind, if your omikuji doesn’t foresee anything good, hang it in a tree and let the wind take those bad omens with it.

This wonderful moment of peace in Taketomi Island was behind us. However, we still had amazing destinations to discover in the Ryukyu Islands, starting with Kabira Bay (川平湾) the next day.

How to Get to Taketomi Island

To go to Taketomi Island, you will first need to go to Ishigaki Island. It takes about 3.5 hours of flight from Tokyo (東京), 2 hours from Osaka (大阪), and 1 hour from Naha Airport (那覇空港) on Okinawa Island.

Ferries travel between Taketomi and Ishigaki Port. It takes approximately 15 minutes and costs around 1,300 yen.

Spending the New Year on the small island of Taketomi was one of the highlights of our trip to Okinawa. Sharing the Japanese New Year’s traditions with the island’s inhabitants in magical sceneries was the perfect way to start a new year!