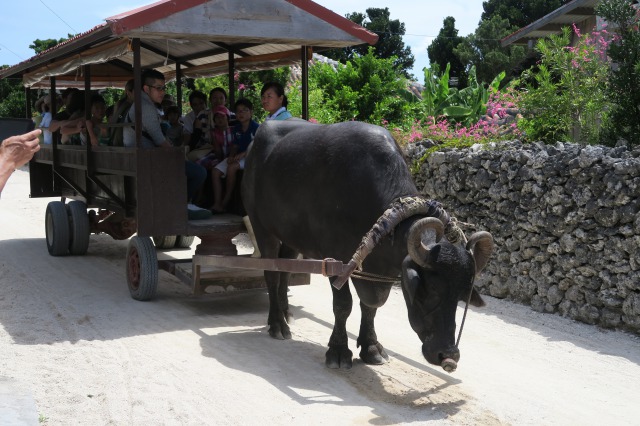 Traveling Back in Time on Taketomi Island, Okinawa 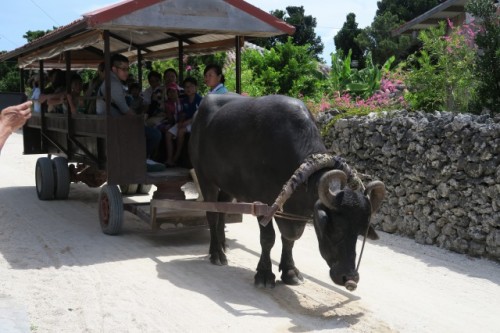 Taketomi Island (Okinawa Prefecture) is a tiny yet amazing land, transporting you back to older and simpler times in a traditional Ryukyu village. Thanks to preservation efforts, we can now witness and interact with a whole island that is almost entirely comprised of traditional style, one story houses, archaic stone walls and the red tiled roofs of Ryukyu culture. Not only this, but every house is guarded by Shisa statues in an array of interesting, different and sometimes down right creepy styles. The Shisa are designed to ward off evil spirits from the household, and I have to say, this island had it’s fair share of completely unique ones, different to any I had seen in Ishigaki or Naha. 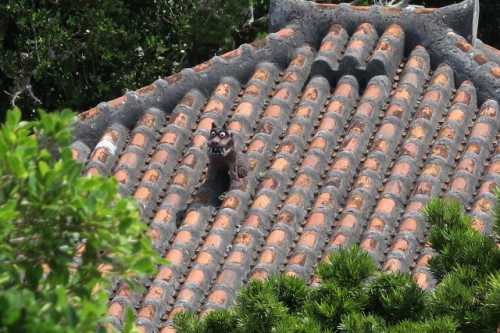 My First Impressions of Taketomi Island

For me, the island was simply perfect. There were no big chain stores, no skyscraper buildings, no pachinko and hardly any cars anywhere. And to be honest, when you’re on Taketomi Island, you really don’t miss any of that stuff (particularly the incessant clanging of pachinko machines). The air is clean, the sun warms your back and everyone is on the streets – whether on their bikes or eating ice cream from the nearby local shops. The atmosphere is sheer bliss. But it gets even better when the water buffalo come along… 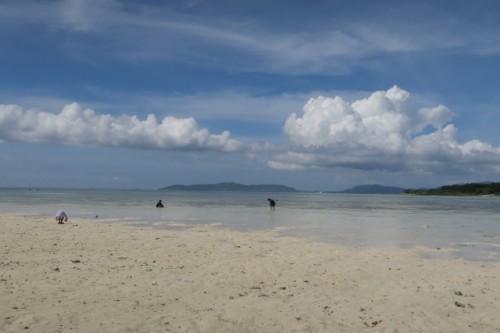 If you cruise the area far enough, or indeed get lost on the island as my friends and I managed to do, you will find water buffalo here and there grazing on grass in their natural habitat. Yet, more likely, you will find them pulling a cart full of people taking a tour around the island. The buffalo’s great strength, muscular physique and steaming nostrils demands the attention of anyone in the area. They look incredibly powerful, dangerous and beautiful. No doubt, they will definitely cause you to stop in your tracks to take a look. But of course, I would not recommend you go too close to them. You’ll understand why if you ever see it’s size or the look in it’s eye. 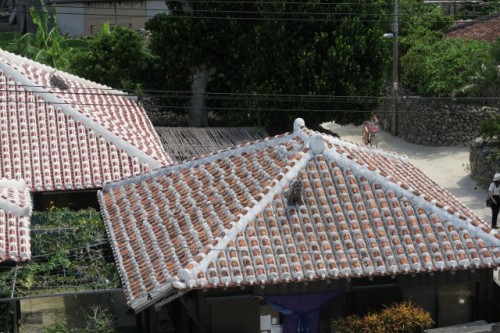 One of the most popular things to do on Taketomi Island is take a water buffalo cart ride. This costs around ¥1,200 and operates between 8:30am and 5:00pm. During the 30 minute ride, you will travel around the village while a Japanese speaking guide explains the history of the island, sings songs and plays Okinawan music on their Sanshin (an Okinawan stringed instrument). What is particularly impressive however is how the water buffalo knows its own route by heart and requires no guidance! 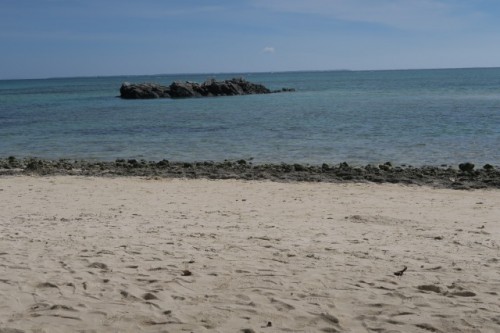 If you’re set on exploring the island to the fullest, I would recommend renting a bike as I did. Although there are multiple bike rental places on the island, its easier to get your bike rental with your ferry ticket. This is possible by simply going to the ferry terminal in Ishigaki and asking one of the staff there.

At the ferry terminal, the staff will call the agency who will arrange a shuttle service for you from Taketomi Port to the bike rental place. From there, they will set up your bike and give you a numbered map with a few suggested routes. They will also indicate bike parking points and provide English explanations of each destination – all on one easy to read laminated card. We began to pick and choose from the sightseeing areas and beaches and were on our way within a matter of minutes. There is also the option to go to a bike rental agency on the island, costing ¥300 per hour or ¥1,500 for the whole day. 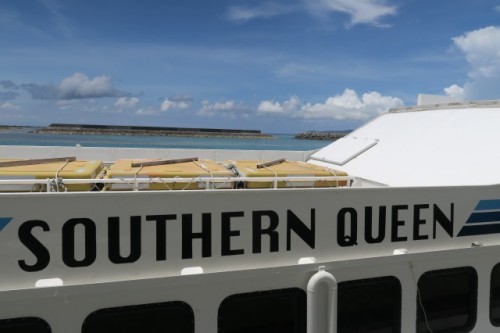 Cruising along the white sandy roads with the wind in your hair, exploring the beaches and whizzing down hills was by far the best thing we could have done. There is just something so great about riding a bike downhill – particularly as there is very little threat of being hit by a car! Not only this, but we were free to cruise around the entire island in no time at all, making it not only fun but also really convenient.

What’s more, we didn’t have to worry about where to put our bikes, since we never seemed to be too far from a bike parking area. Of course, you can walk around the island but I do not think that it would be as fun or relaxing. It’s worth mentioning here that there are no car rental services on this island, but I can only see that as a great thing. 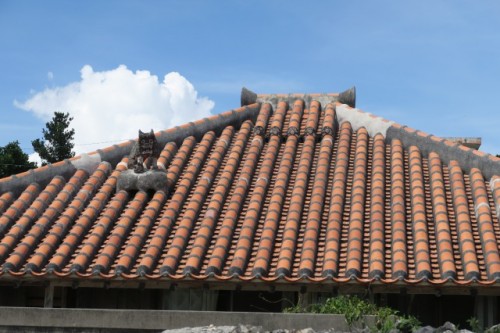 One of the first destinations on our suggested bike map route was Nagominoto Tower – a 4.5m tall tower in the centre of the village. Since it was so close to where we were, we decided to have a look. There was a fairly sizeable line waiting to catch a glimpse of the island but, since I absolutely love beautiful landscape views, I deemed it was worth the wait in the sweaty sunshine. 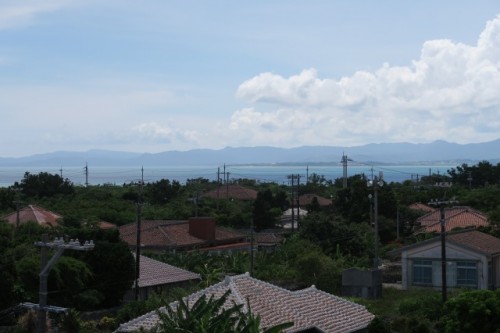 The platform itself is only big enough to fit about two people on, at a squeeze, and the steps are the steepest and narrowest I’ve ever seen in my life, so I decided to go up there alone. The view was quite nice. You could indeed see the many houses around the island, the rows of red tiles and the interesting Shisa guards, but I could not see the edges of the island and nor was it the best sight I have ever seen. In addition, there are so many people waiting, that you feel quite conscious of being up there for too long. In summary, this is one you could perhaps skip, particularly if there is a long line. 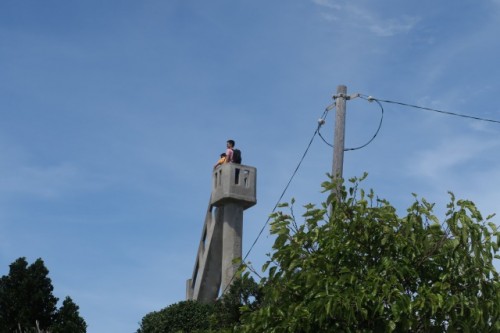 Something you shouldn’t miss however is Kaiji Beach. While swimming and snorkelling are only possible at high tide and there are no facilities here, it turned into one of my most treasured Okinawa memories.

I’d had my heart set on this beach since before I’d even decided to go to Ishigaki island because of its famous star sand. You can see this sand bottled all over Okinawa as souvenirs. Yet, despite this, the ground was not as scattered with stars as I had thought it would be. In fact, we had to dig around a little in the beaming sun to even find one. Though, we managed it in the end. 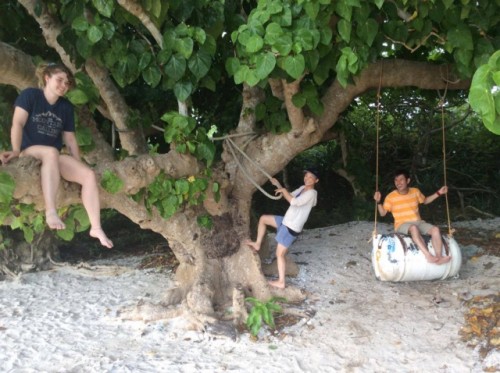 Turns out that the star sand – that’s actually the skeletons of small organisms that live among the sea grass – wasn’t the highlight of the beach. Whilst relaxing among the shade of some trees on the beach, we found a barrel swing and further exploration led to an extremely large, climbable tree with ropes. Laying in the tree, singing and playing with my new found friends is now a special memory that I will never forget.

Taketomi Island can be reached easily from Ishigaki Island. Three ferry companies offer high-speed rides every 30 minutes between 7:30am and 5:30pm, with a short break at around noon. A roundtrip fare will cost around ¥1,300 and takes just 10 minutes. There is also an infrequent car ferry that takes around 15 minutes. There is no need to book a reservation, but you can do so in English at aferry.com if you wish. 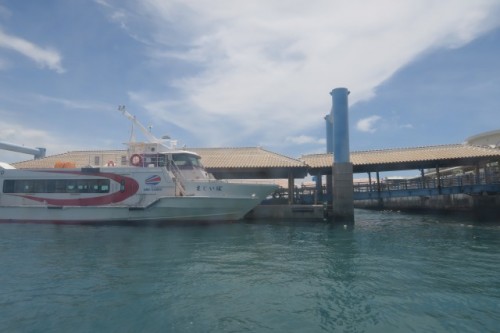 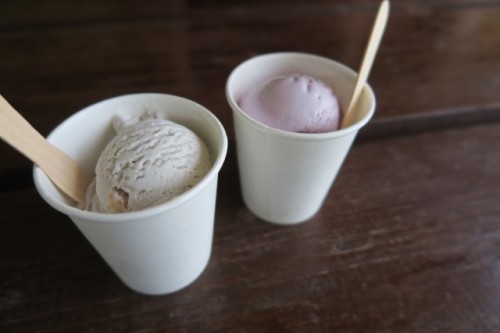