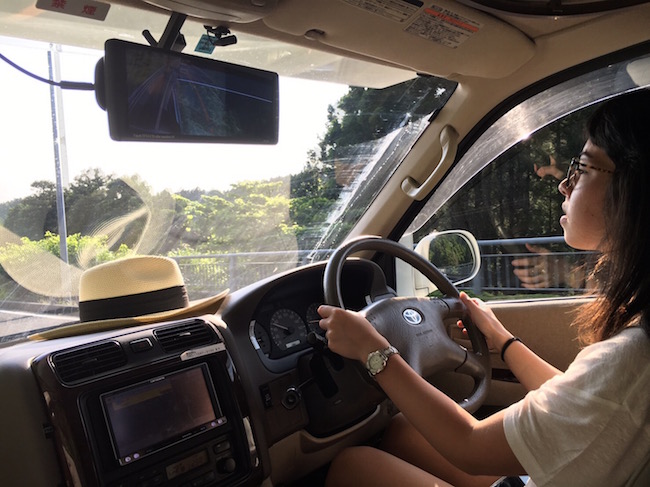 Tips From An American Driver in Japan

Driving comes as second nature for many of us Americans who grew up living in cities or suburbs with so much land to cover on wheels. For many, including myself, it’s a rite of passage as a teenager to finally get that ID telling us that we are responsible enough to get behind the wheel. Fast forward a few years; there may come a time when you’ll have to finally drive in a foreign country. No, I’m not talking Canada, but a place as foreign as Japan – where driving rules and practicalities can be just as different as the language.

I recently drove a rental camper van in Japan for the first time, and here I recount some of my experiences and share some of the differences about driving in this country.

Get The Japanese Driving Permit

First and foremost, make sure to attain an International Driving Permit before leaving the US. This just takes a quick trip to your nearby AAA (American Automobile Association) with a valid license (from a country where you lived for at least 3 months with the license), a passport photo, and $20 in hand. The permit is valid for a year, but if you plan on staying longer, you will have to renew either in person or by mailing your request. If you are or going to be a resident in Japan, though, you won’t be able to renew your permit, which is intended only for tourists. In this case, keep on reading to find out how to get your Japanese license!

Driving Laws and Safety in Japan

The driving age in Japan is 18 – not 16 –which means that even if you legally can drive back in the US, you can’t drive in Japan until you’re at least 18 years old. Even then, many rental car companies will have different restrictions and costs for younger drivers.

Also, in Japan, you drive on the left side of the road with the driver’s seat being on the right. Both of these are opposite of the US, which definitely frightened me at first, but it surprisingly came naturally! Just as a rule of thumb: always remember that the driver seat is closest to the middle of opposing lanes.

This lane difference also means that turning right on red (like we do back home) is dangerous and very illegal! In fact, all turns on red are illegal in Japan, so don’t even try. On the other hand, U-Turns are legal at many intersections. Even though most traffic signs are written in English and Japanese, Japan is still full of road signs I’ve never seen in the US before. Here’s a helpful link to get familiar with the signs you’ll see.

Don’t forget that distance and speed are measured in kilometers, not miles, so read your speed limit signs carefully. Luckily, your Japanese car will already show your speed in kilometers but pay close attention in the beginning anyway. Speaking of speed, Japanese drivers tend to drive faster than the limit, even in cities and run to make yellow lights. Always look both ways at intersections and keep up with the flow of traffic on highways.

That being said, Japanese drivers tend to be more polite than American drivers, certainly an extension of the overall culture of Japan. It is rare for people to cut you off in traffic and common for people to wait to allow you to pull out of a parking lot in front of them. It’s an unspoken courtesy to flash your hazard lights a couple of times if someone yields for you as an acknowledgment. Also, people only honk their horns as a warning of real danger or tap the horn as a “thanks”; the horn is rarely used to express anger at another driver.

Japan also has absolutely zero tolerance for drinking and driving. While in the US, we can legally have a blood alcohol content level below 0.08% (roughly one drink), this doesn’t apply to Japan. If you’re committed to driving for that day, you’re committed to not drinking any alcohol until you’ve finished driving. Don’t put yourself and others at risk, especially in a foreign country where driving will take a bit more concentration and care.

Things I Wish I Knew Before I Started Driving in Japan

As it might not come as a surprise to you, the streets of Japan are very, very narrow. And often, these narrow streets are considered two-way streets! I had to drive down some of them in the camper van when we first tried to get out of Tokyo, and though we made it out without any dents and scratches, it still left my palms sweaty with worry. You won’t find many streets with roads big enough for tractors, even between rice fields. Most cars here are more compact than back home, likely made to fit the narrow streets of Japan. Remember to always be aware of the size of your vehicle, and keep this narrow (street) mindset even when you get out into the countryside.

Have you ever had to make a quick decision to turn or change lanes and quickly turn on your blinkers? Well, I had to do this while driving in Tokyo or going fast on the expressways. And every time, I ended up spewing water or turning on the windshield wipers instead of my turn signals! Keep in mind the turn signal and windshield wiper controls are opposite to what you are used to. Be sure you pay close attention to where all your controls are so that you don’t come off as a driver who doesn’t use your blinker or can’t turn on the headlights through dark tunnels (oh yes, that was a scary one).

When you are using expressways, remember they are expensive! I’ve driven cross country in the US without ever coming across a single highway where I had to pay. Personally, the only place I’ve used a toll fee was the Seattle 520 bridge, which is no more than $5. In Japan, all expressways are toll roads, so you pay according to the distance you drive and it adds up quickly; a few hours on the road can cost you over 10,000 yen. Of course, what you are paying for are pristinely maintained roads and clean and convenient rest areas, but the price is steep.

Getting a Japanese License

After my little test drive weekend, I feel more confident in Japan driving. Since I’m living here for a few years, getting a Japanese license seems like a reasonable next step! If you’re in the same boat, and if you are an American too, just remember that the process will be a bit tougher. Unlike residents from countries with the bilateral agreement, we Americans have to retake the practical driving exam along with the written exam (unless you have a license issued in Maryland, Washington, or Hawaii).

And don’t jump the gun on car hunting before the exams are done, because Japan has a brutal average pass rate of 35% (20% in Nagoya) for the practical exam. And if you want to drive a manual transmission, you’ll have to drive an automatic to test for your license!

~Wish me luck and see you on the road!

Helpful Resources for Foreigners and Americans Driving in Japan