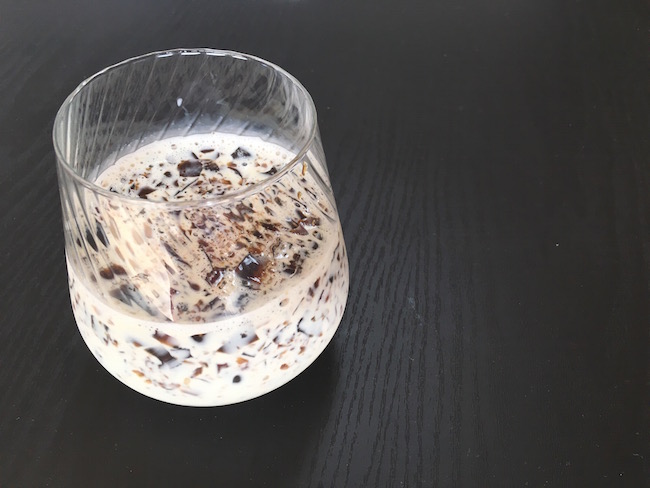 Coffee as Dessert? The History and Recipe for Coffee Jelly

Some people think of Japanese food as sushi and ramen, but the cuisine of Japan has been influenced by the West since its first connection in the 16th century. At that time, the Portuguese introduced bread to Japan, which is why bread is known by its Portuguese name, pan. Japan has been quick to assimilate many foods of the world, from curry to pizza, giving them a unique Japanese twist. Perhaps one of the more interesting imports to the world of Japanese food is coffee jelly, a dessert that came from the West but thrives today in Japan.

The History of Coffee Jelly

The introduction of coffee jelly コーヒーゼリー to Japan dates back to the early 20th-century. During the Taisho period, when Japan idolized Western culture, Japanese people craved a dessert that imitated molded jellies of the West. The exact origins are unknown, but one article suggests coffee jelly was created in Boston in the late 19th century.  There are many ways to eat it; by itself or in iced coffee, with ice cream or other sweets; there’s no limit to the sweet (or bitter, if you prefer) goodness. Although it was invented in the West, today, it is a dessert that is actually pretty unique to Japan.

The invention of coffee jelly in Japan actually makes a lot of sense. An agar-based gelatin called kanten was invented in Japan during the Edo era, so the basis for making jelly existed in Japan long before it was invented. The Japanese taste for coffee only came later when everything from the West, including their strange alternative to tea, became a fad.

Convenient stores and grocery stores sell many varieties just like pudding (ぷりん) or yogurt, and it’s exciting to try out different sweets and toppings that go with the bitter jelly. Coffee jelly is also super easy to make at home, so here’s a taste of my own recipe!

How To Make Coffee Jelly

The first step is to make the coffee. The simplest way is to use instant coffee, to which you can add sugar or sweetener before you pour in the hot water. If you prefer a higher class dessert, brew yourself a new cup or two from your favorite beans. In the original recipe, the inventor wanted to avoid wasting a perfectly good pot of coffee, so he just used whatever was left at his restaurant at the end of the day.

Whatever you decide to do, make sure the coffee is good and hot before the next step. Here, you add some gelatin and stir with a spoon. Add more hot water to fill up the container, then stir the mixture as you pour in the rest of the gelatin packet. Make sure the mixture is evenly stirred in.

Step 3: Allow It to Cool Until Solid

Let the mixture sit and cool for about 5-10 minutes. Then, put the lid on the container and put it in the fridge. Let it sit overnight, or until solid. Once the jelly is ready, you can enjoy it in many ways!

Ideas on how to enjoy coffee jelly: