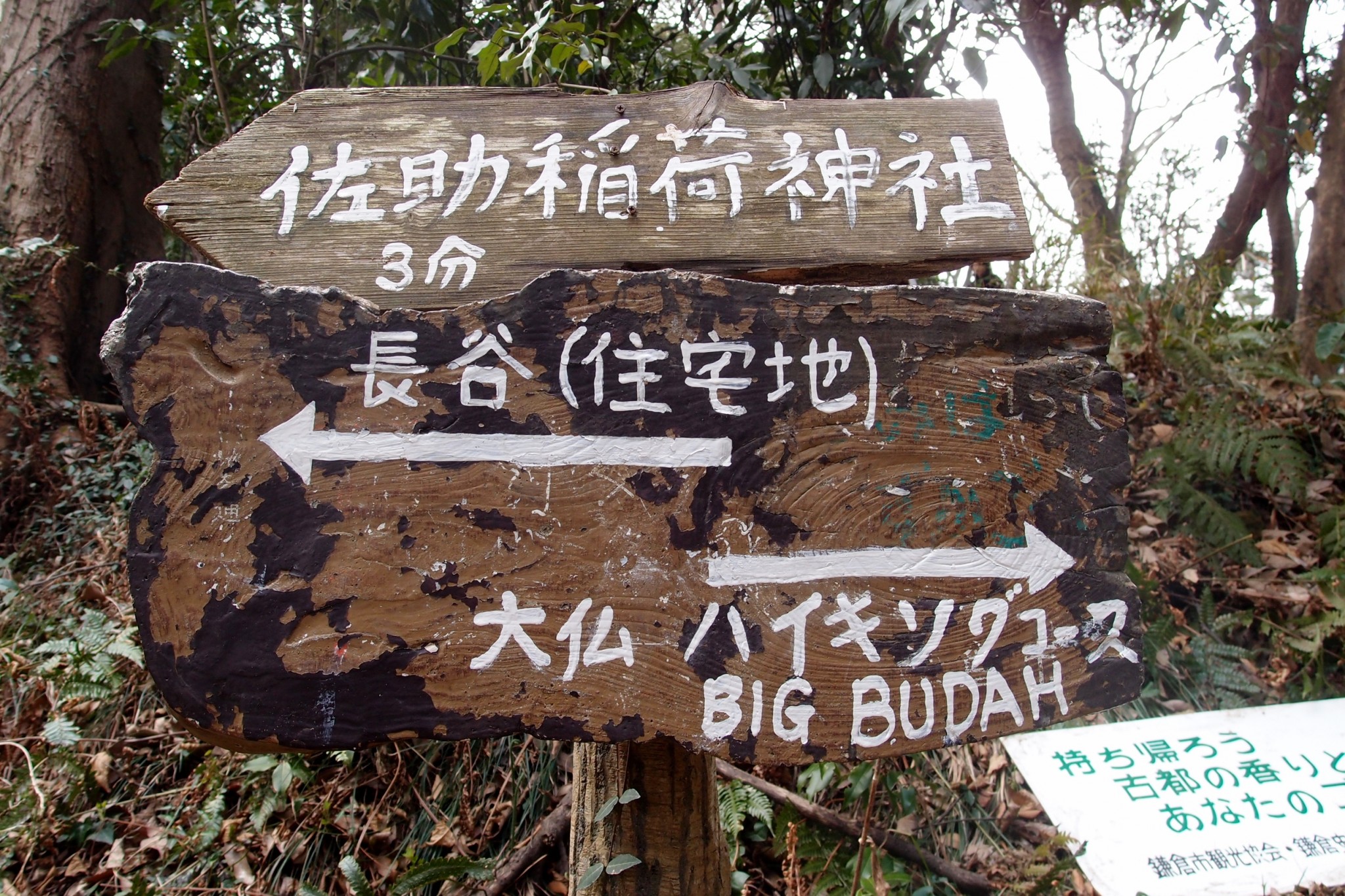 Hiking might call to mind an expanse of unhindered wilderness. In Japan, where close communities were once hemmed in by impenetrable forests and clumped mountain bunches, hiking can be done a short ways from many ancient capital towns. Branching out to olden passes led to Kamakura, and like a woodland serpent smooth and occasionally ridged, the Daibutsu hiking course flicks this way and that just outside Kamakura city. 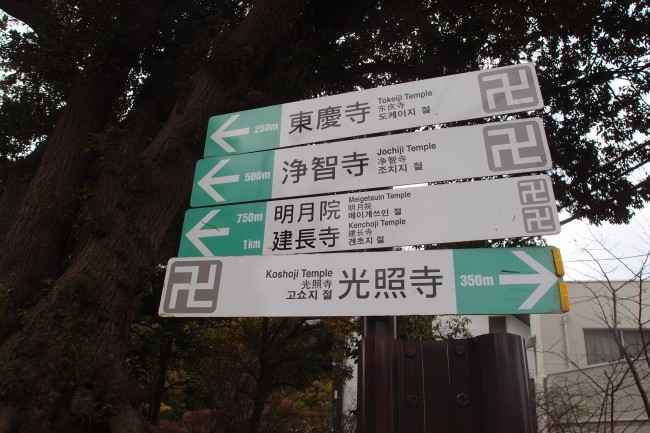 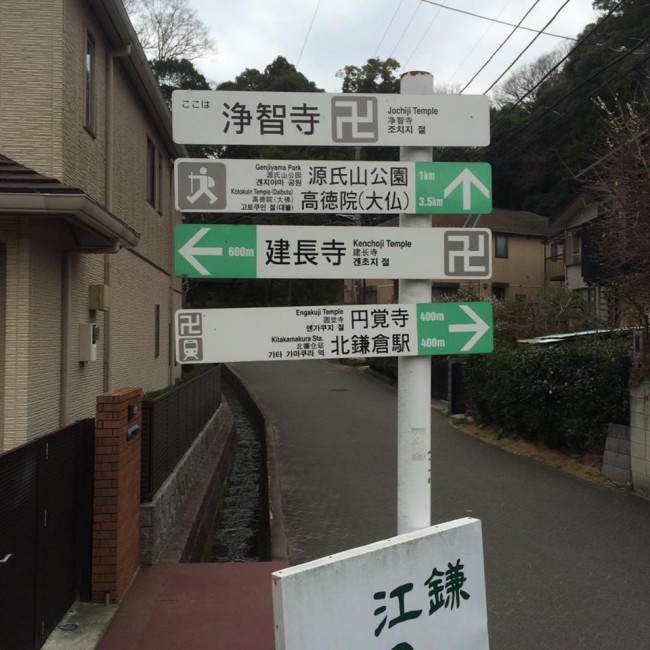 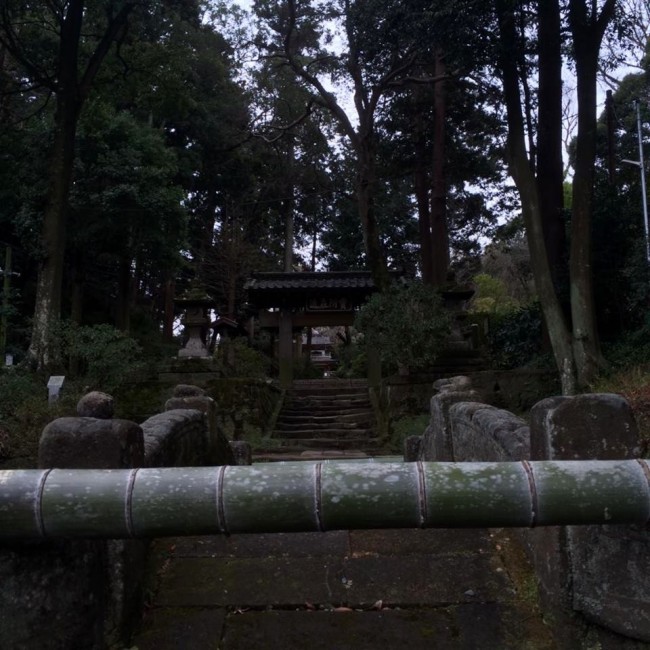 The Kamakura hiking course’s first temple at Jochiji is in earshot of the nearby JR line. Pavement and concrete kept up with the times continue from the street for a small while. However, with Jochiji’s two gates, one framed smaller within the first’s opening, they contract the outer world to a timeless point. The temple is dedicated to the past, present and future. 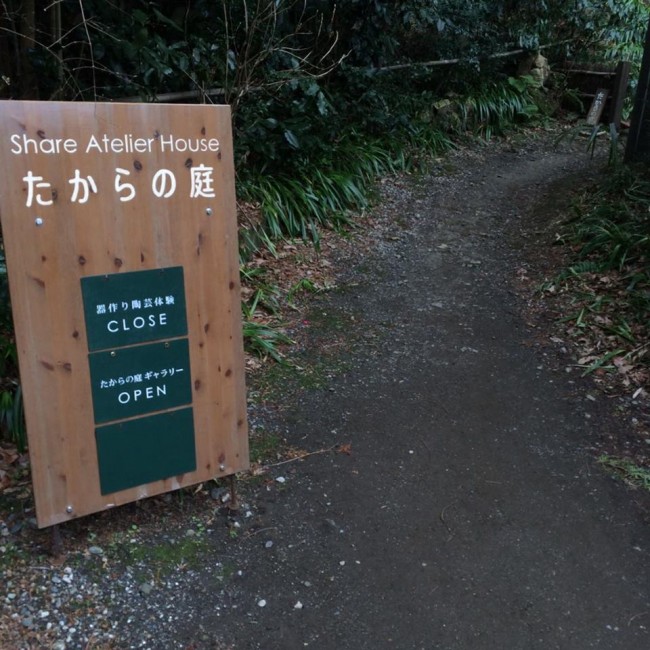 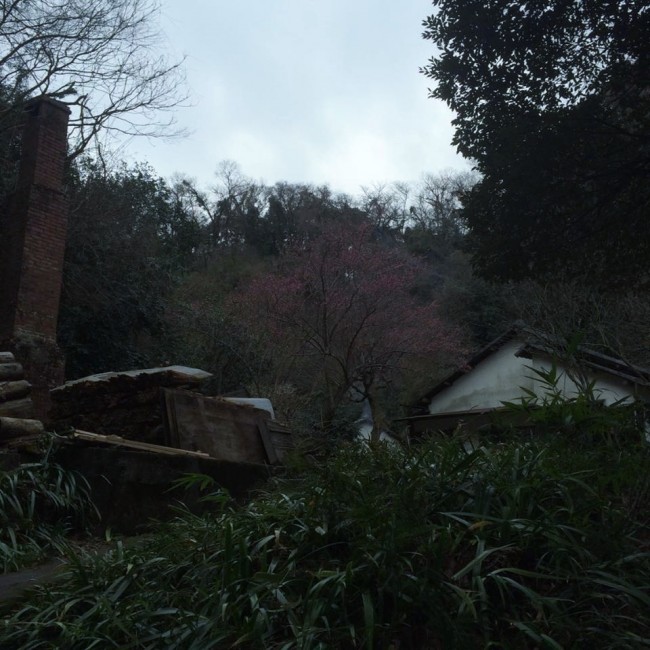 Outside Jochiji, peaked Japanese roofs on well-concealed houses share the shrine’s sanctified auras. Bamboo beds smother the pavement after a brief struggle. Here, where the hills huddle, is the craftsman collective at Takaranoniwa. Workshops and a gallery are held inside its cottage as a woodworking stove curls smoke through the little clearing. 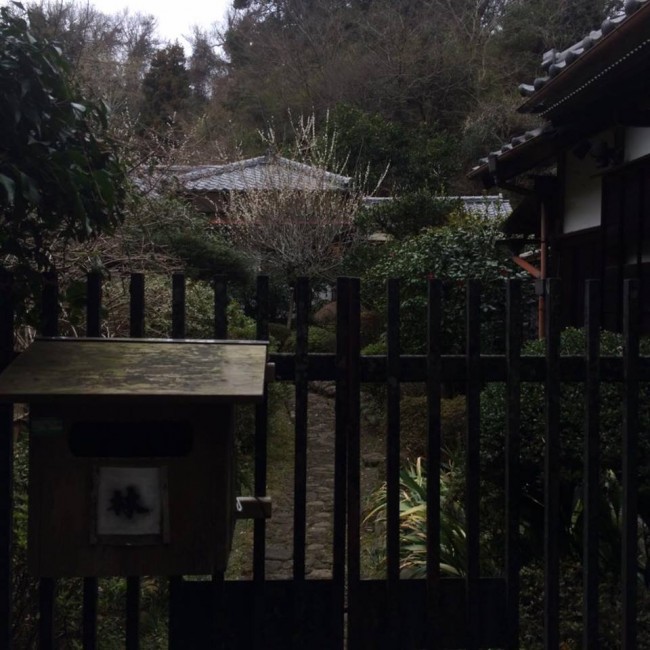 The woods deepen past Takaranoniwa. Fenced by shrubs, with their doorways in a distance’s obscured detail, more nearby Japanese estates are parted from the trail. It doesn’t feel like crossing the domain of man, but rather a plane of spirits. No one is seen trimming their gardens or sweeping their doorsteps around these haunts, claimed as they are by nature. 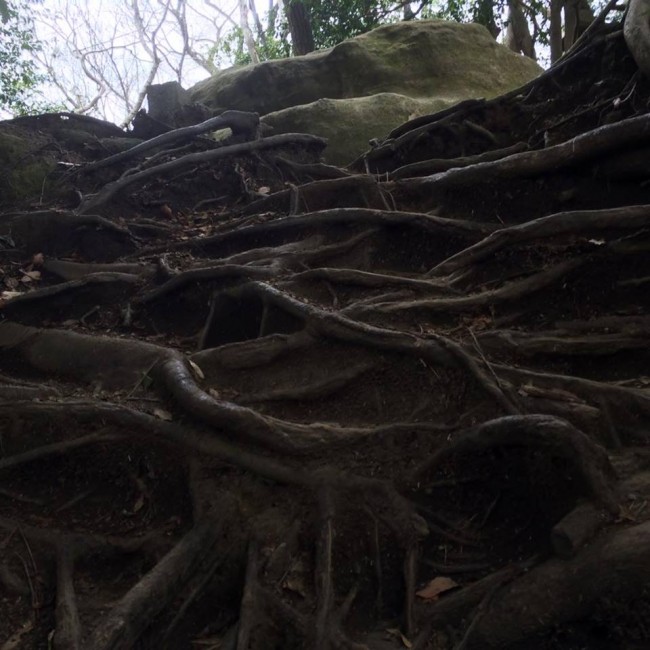 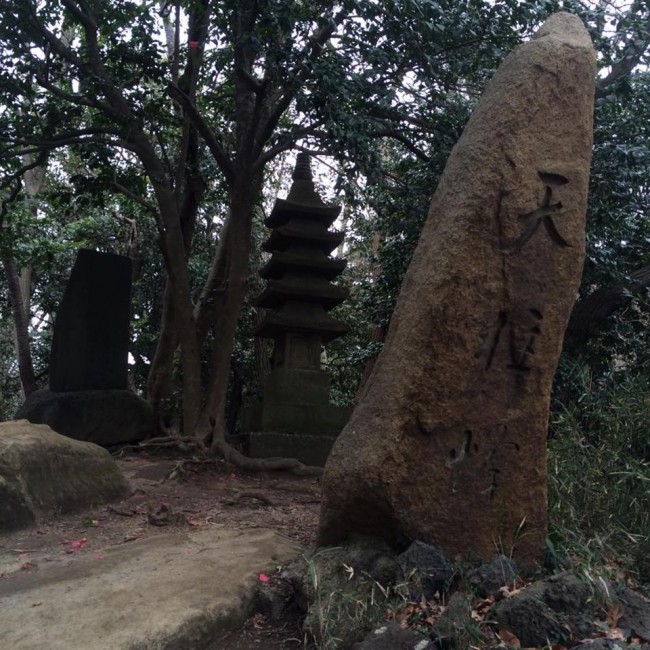 The Daibutsu trail becomes a serpentine spine. Parsed-apart roots crawl on the ground; take care avoiding these nature gnarls. Little climbs will bring you to stone fingers planted on knobs of the earthen spine. They are tattooed with cascading calligraphy. 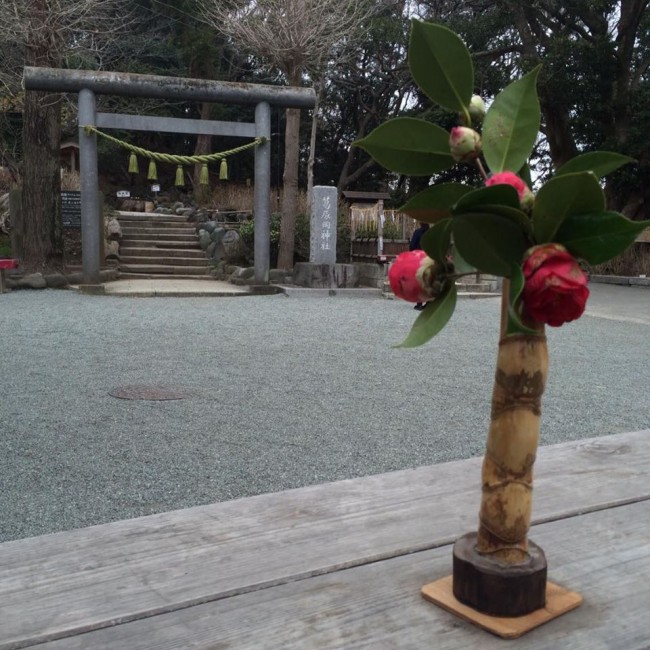 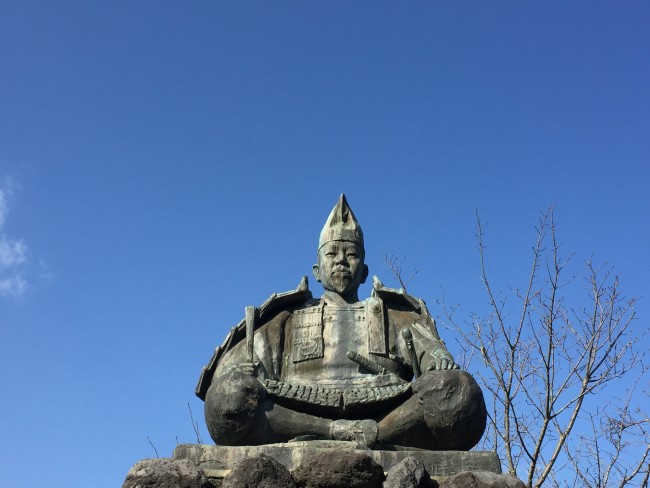 The woodland broaches a broad opening. To the right is Kuzuharaoka shrine’s entrance. While visitors wish for love on heart-shaped votive tablets, the shrine is also the historic execution site for a man who betrayed the Kamakura shogun. A monument to the first Kamakura shogun sits perched on a nearby hilltop in Genjiyama park. 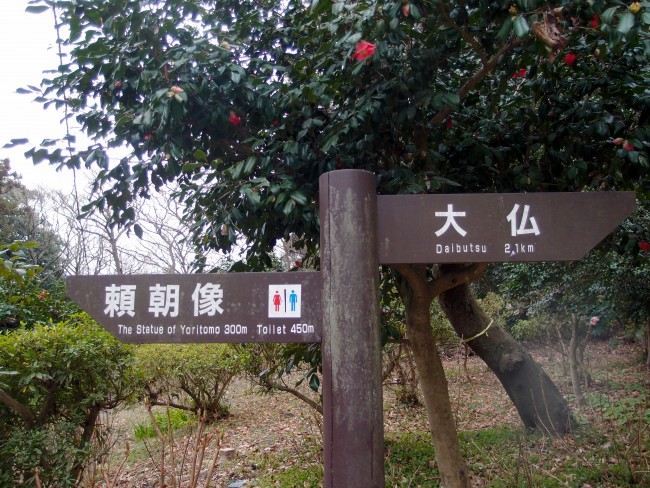 Genjiyama park is situated at the nexus point of a couple roads. Here, a vaguely circular intersection allows cars passage through the profuse nature of Kamakura hills. There, in relief for anybody concerned about directional clarity, are many signposts listing directions. 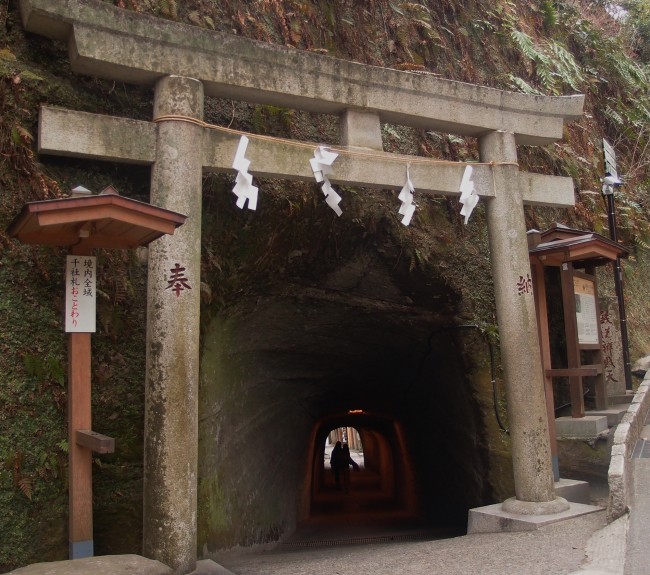 While Genjiyama’s bamboo-benched offshoot is to one side, Zeniarai Benten shrine lies within a cave down on a hillside looking east towards Kamakura. Bring your money stacks here, wash them and watch your wet assets double in value. Though its concerns are material, Zeniarai’s caves feel deeply spiritual. 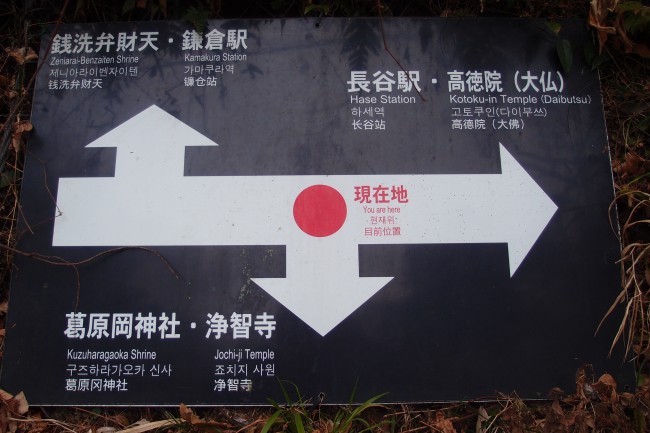 At the intersection, look for a signpost directing you towards the Daibutsu. Follow through new patches of wood, opening at places like beach shrubs to open sea.
A couple houses without a single soul stand at the roadside. With the Kamakura panorama from one and the distinguished age of the next, I could imagine old couples sipping sake while speaking poetry at their windows. Though the residents are absent, opposite the old home a bone white grove of trees is spaced proportionately; spires sequenced by a specter. 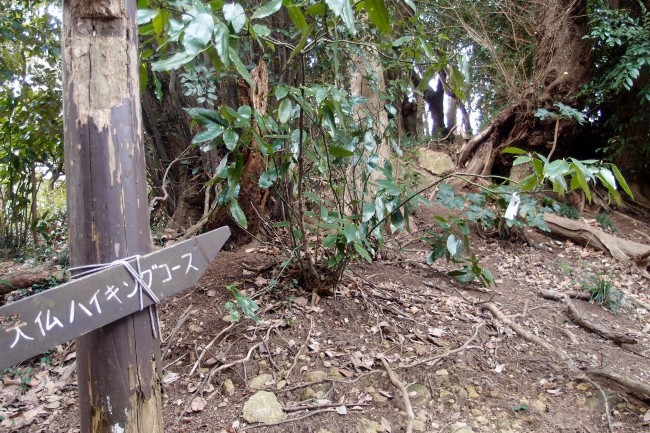 The ghostly gambol continues, spiriting oneself away from the inhabited area. Tall trees lean in the wind, groaning most ancient nature enchantments. The greenwood groves are planted with tufts of knee-high grasses. Where trees and hills give way, these ground-groping grasses allow you some Kamakura bay sights. Although a modern addition, there is a landmark spire that stands steaming over Kamakura vale which you can also enjoy. 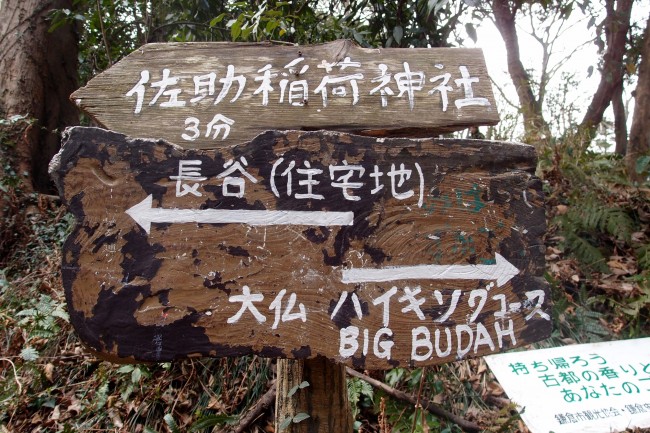 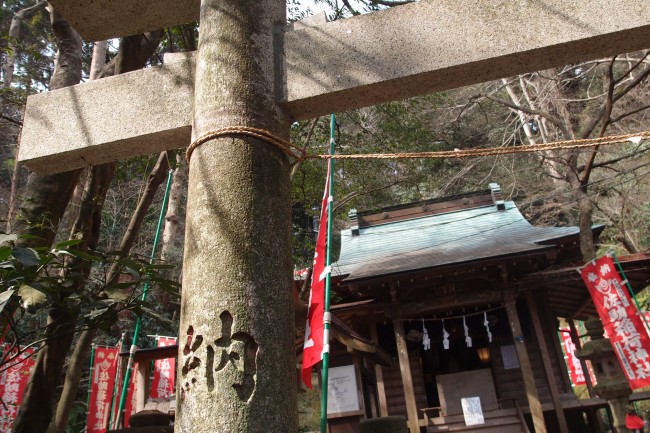 In one level place the path splits. Sasuke Inari shrine is marked with Japanese lettering – take the left and descend. Continuing the descending sensation, orange torii gates traipse their fox trail into Kamakura town. The god Inari is famed for his foxes, his messengers to mankind. Litters of small fox china are planted around the green shrine. 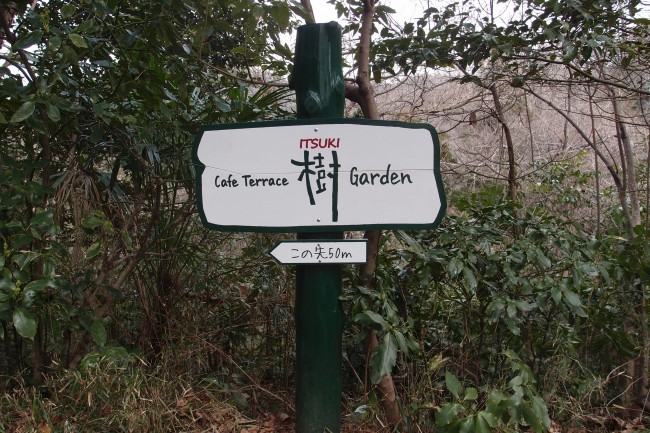 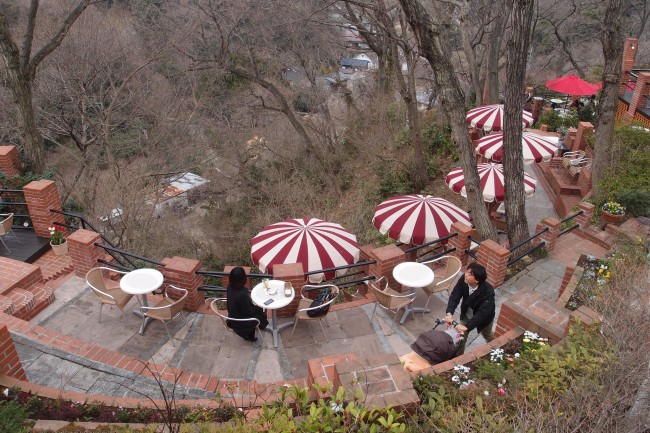 Back at a crude sign, walk on through the forested hills. If your legs are tiring and strength is waning, wait until you come to a sudden knob circled by those low grasses. Look for a painted green sign marked “Itsuki cafe.” Following a hill-inlaid stairwell, you will arrive at the cafe’s white chalet looking over its baked brick terrace. Enjoy a double shot of espresso over the cafe notch’s nature niche.
Rejuvenation sipped to the last drop, reunite with the trail. From Itsuki cafe, the winding way unwinds as the hiking course’s run slows close to the ground. The sky opens over quaint garden green fit for fairies at play, and warped steps change into an even stairwell. Before long you will round a bend for the round-bellied Daibutsu.