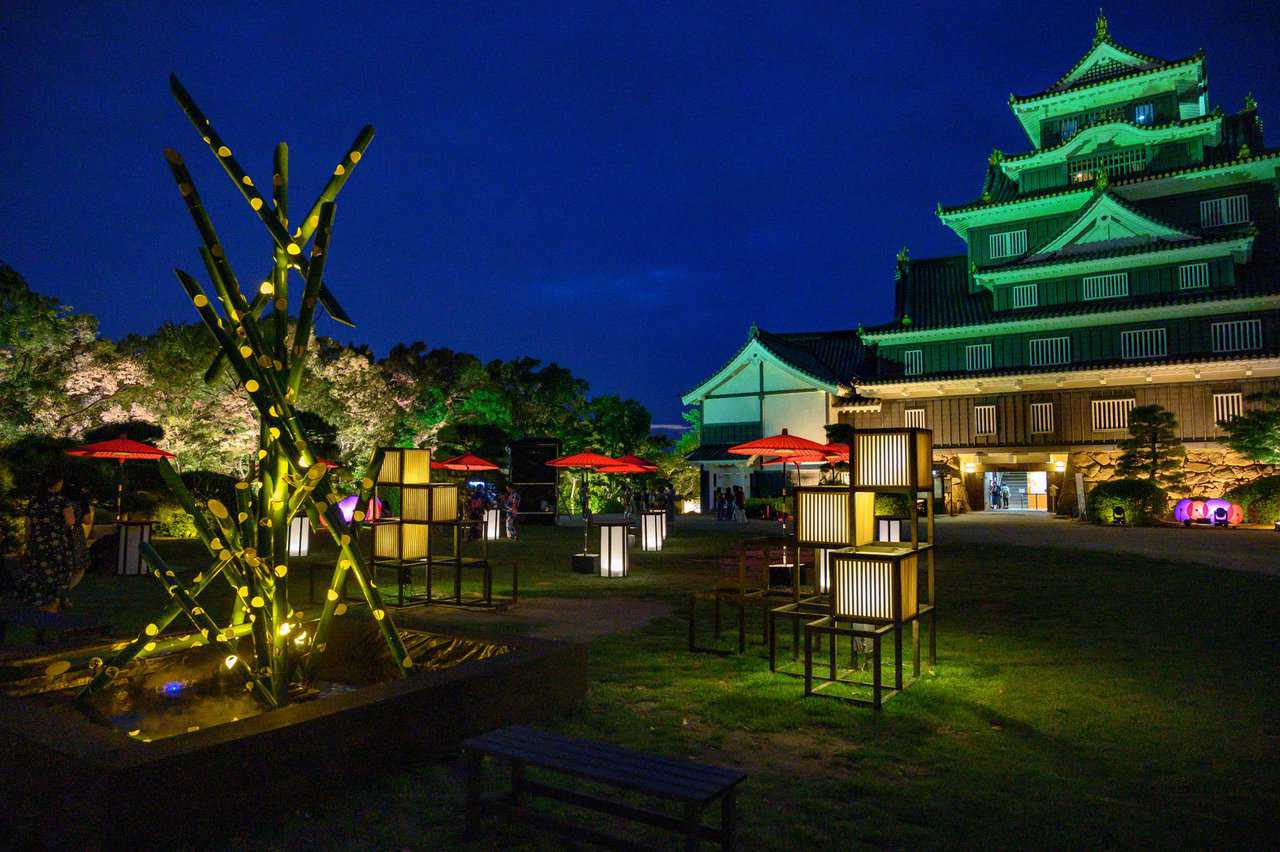 Day or Night, Okayama Castle is One of the Most Beautiful Castles in Japan

Perched on a hill overlooking the Asahi River, Okayama Castle, also known as “Crow Castle” (烏城 U-jō ) once acted as a stronghold for the Toyotomi Clan but now watches over its neighbor on the other side of the river, Korakuen Garden, one of the three most beautiful gardens in Japan.

The castle was built by Ukita Hideie, whose family loyalty to the Toyotomi clan ran deep; his wife Gohime was Toyotomi’s beloved adopted daughter. Though it took nearly 25 years to complete the construction, Ukita only presided over the castle for 3 years when his loyalty to Toyotomi and the treachery of some of his trusted allies caused him to be on the losing side of the Battle of Sekigahara. Ukita was banished, his castle and land given as a reward to the man who betrayed him, Kobayakawa Hideaki. In an act of poetic justice, Kobayakawa died just 2 years later without an heir and the Ikeda Clan was given control over the castle until the end of the Edo era, during which Korakuen Garden was built.

Today’s structure is a modern concrete structure, rebuilt in 1966 after being destroyed by Allied bombings during World War 2. There are now six floors and a basement of attractions in the castle, which although are not realistic to the original structure, provide visitors a level of comfort and convenience many other castles do not, including an elevator to the upper floors.

Because of the modern construction, Okayama Castle is able to offer activities and amenities that visitors to Okayama might enjoy. On the second floor, there is a Bizen Pottery studio where you can make simple items using the technique and material of Bizen, a style of pottery invented in Okayama Prefecture over 800 years ago. With the help of a skilled craftsperson, I made a Bizen tea bowl here.

After donning an apron and receiving written instructions in English, the craftsperson guided me step-by-step through the process of making a bowl. After placing the clay in the center of the potter’s wheel, I formed it into a mountain and then with my thumb, hollowed it out like a volcano.

Next I used both hands to squeeze the walls of the bowl thinner and thinner as I rotated the wheel to keep the thickness as uniform as possible. As the clay dries, small cracks form which need to be smoothed over using a damp chamois cloth. Finally, the master creates a beautiful spiral design inside the bowl, a step that is too difficult for an amateur like me.

The workshop also provides various “stamps” you can use to create designs on your creation. The stamps represent icons famous to the region: the legend Momotaro and his friends, samurai helmets and even the castle itself. Some of the larger stamps are made to use on flat objects like plates, so I chose from a collection of the smaller stamps which could be used on the inside or outside edges of the bowl. The last step was to engrave my name on the bottom so the bowl can be identified later to send to me by mail after it has been fired.

The entire process of making a bowl took about an hour, though time will vary depending on the difficulty of the item you wish to make and the level of detail you want to invest in it. The cost is a reasonable 1230 yen, though you will need to pay postage to have the item sent to you later as it takes another 1-2 months to fire and finish it for you. You may need a reservation to participate during busy periods but on the weekday I went, it did not appear a reservation was needed.

The Sweetest Dessert of Okayama Castle

In addition to the pottery studio, there is a place to dress in luxurious kimono and take portraits as if you were Japanese royalty (free, but reservation needed), several locations to take “trick art” photos, a lovely gallery about Ukita Hideie containing the amazing watercolor portraits of artist Kimiya Masago and several pieces of historic armor, and a restaurant serving, in addition to Japanese soba dishes, an exquisite fruit parfait. Given Okayama’s status as a fruit growing region and an appetite worked up making my tea bowl, I decided to stop in for a cool treat.

The staff offered the choice of momo or ichigo (peach or strawberry). The prevailing image of Momotaro as the hero of Okayama influenced me and I chose the peach, which was clearly the right choice. The juicy sweet peach slices floated on a scoop of vanilla ice cream which in turn floated on a layer of peach infused gelatin. A huge perfectly round grape topped the creation, held in place by a cushion of whipped cream. A perfect way to end a day at the castle before returning to my hotel to prepare for a night at the castle.

A Night at Okayama Castle

Back at the hotel I took a quick shower and nap and changed into my summer yukata, a comfortable and stylish way to enjoy an evening stroll through the castle grounds and nearby garden. As darkness fell, I headed back to the castle in the relative cool of the evening.

Though the castle is illuminated every evening until midnight, August provides a special opportunity for an evening stroll in both Korakuen garden and the castle grounds. Beautifully lit sculptures and tables with Japanese umbrellas are set up in the courtyard for visitors to enjoy a laser light show using the castle as a backdrop several times per evening. Young ladies in bright summer yukata arrive in small groups, laughing and posing for photos together.

Between shows, visitors can sit and enjoy the illuminated sculptures and castle, snapping selfies or other photos. When the show begins, the fog machine fires up, the music increases in tempo and visitors are treated to a exciting show featuring lasers, spotlights and other spectacles. The show lasts for about 10 minutes to the glee of the spectators, then reverts back to its normal illumination. After the show, take a short walk down the hill and across the bridge to enjoy the sister illumination event at Korakuen Garden.