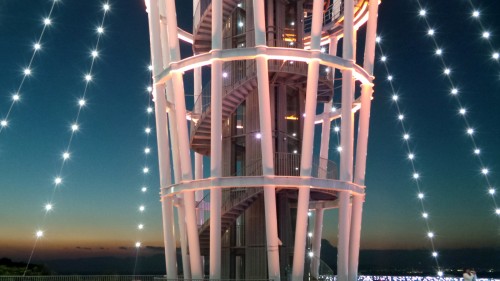 You have until Feb.19, 2017 to admire “Enoshima Illumination Festival”  on Enoshima Island. This award winning illumination event is one of the most important winter illumination festivals within the Tokyo and Kanto areas. It’s only a short train ride from Tokyo, so you can’t miss it!

If you know a little about Japan, you may have already realized that Japanese people love having fun! Here, every season is a great opportunity to organize festivities. Sakura in spring, matsuri in the summer, koyo (foliage) in autumn, and snow festivals and illuminations in winter. Daylight falls into darkness around 4:30pm, which could be depressing. But not in Japan where everything is always a new source of positivity and an opportunity to celebrate. As a result, creative and beautiful light festivals are organized all over the country! 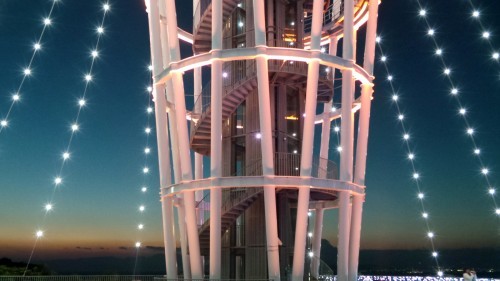 This small island is located in Sagami Bay, south of Kanagawa prefecture, and is known to be a romantic date spot. The island itself is only four kilometers in circumference and composed of a yacht harbor and a forested hill among many other visiting spots. Connected by a bridge to the mainland, Enoshima Island welcomes many visitors on the weekends, including couples who come to ring “Ryuren no Kane,” the Lovers’ Bell. 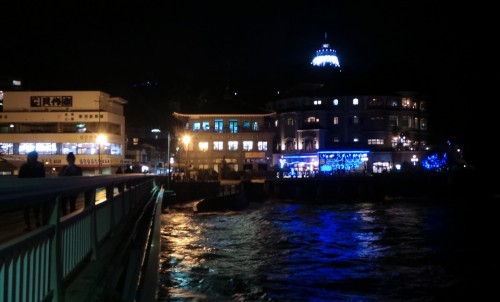 One of the most charming places to visit is the Samuel Cocking Botanical Garden – named after the British merchant who built the garden – located at the top of the island. Its lighthouse called “Enoshima Sea Candle” has even become the symbol of the island! You can climb up the observation deck for a panoramic view of Mt. Fuji, Izu Peninsula, mountains of Hakone and Tanzawa, Oshima Island, Miura Peninsula and Yokohama Landmark Tower. 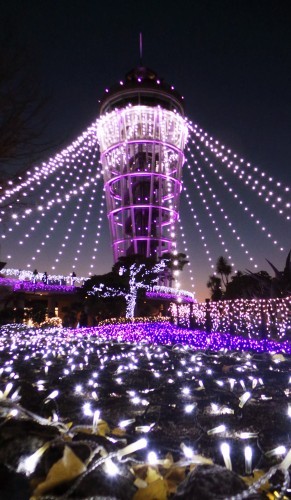 Most of the illuminations are installed in the Samuel Cocking Garden. Around 5pm, a voice echoes on the island to announce the beginning of the illumination. Everyone gets ready: photographers install their tripods, lovers snuggle up, everyone looks for the best point of view. After a proper countdown, thousands of little fairy-like lights light up at the same moment: the lighthouse and the garden are transformed, and everyone says “sugoi!” (amazing!) at the same time. And it sure is amazing! It’s like suddenly being in an imaginary world, though it takes a little time for the eyes to get used to the lights. 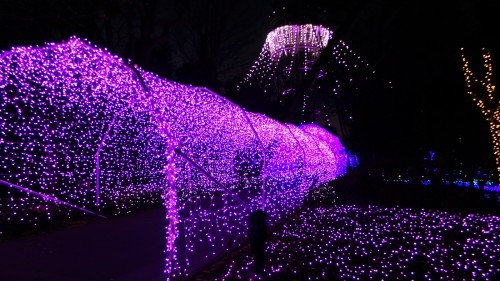 After admiring the Enoshima Sea Candle from a distance, you can climb onto the “Sunset Terrace” (free access, staircase near the toilet) to admire it from up close. Then, you can walk around the garden and discover the various luminous installations: arches of lights forming a tunnel that showcase bright chandeliers, tropical trees decorated with colorful lights, large spheres of light floating above the head… 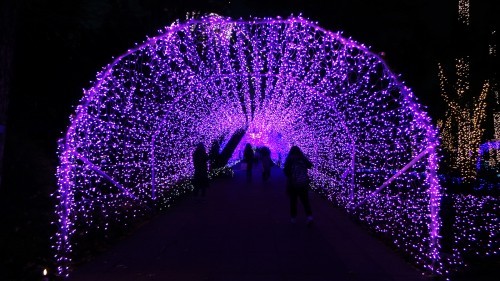 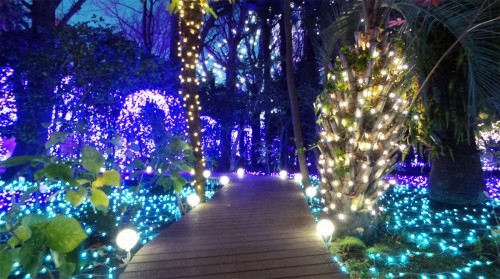 There are other places besides the garden around the island with illuminations. These other spots do not have admission fees. 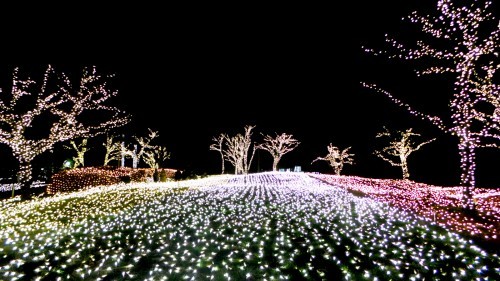 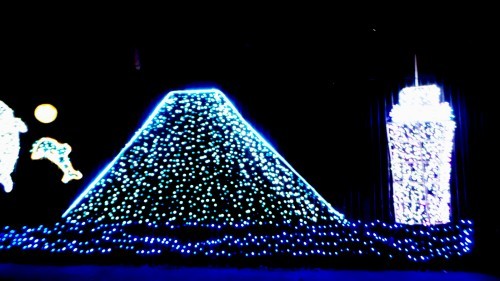 This less-congested street is located on the other side of the island from the garden, and is near the “Ryuren no Kane,” the famous Lovers’ Bell. 2016 is the first year this area has taken part in illuminations, and it’s worth a look! 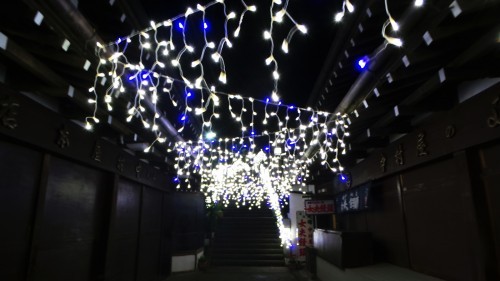 The Lovers’ Bell is at the end of a short secluded trail lit with lanterns. Enchanting lights illuminate the corners of benches where the lovers like to spend time. The bell is located a little further down. According to tradition, couples ring the bell together and write their names on locks, which they leave attached to the fence. These locks are also joined by seasonal lights at this time of year. 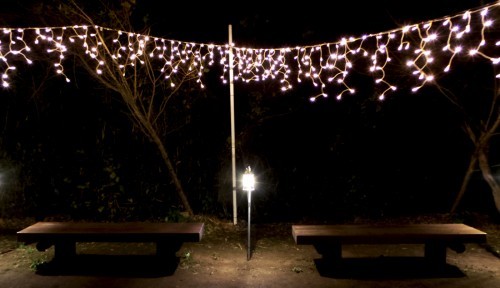 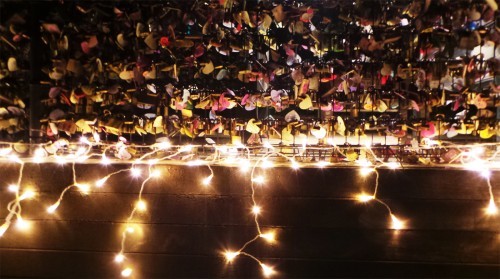 Finally, before parting with Enoshima Island, you will come across another little garden adorably embellished in lights. 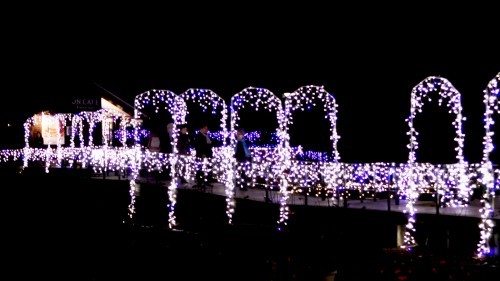 Every evening during the festival, four stations of the Enoden line (Enoshima, Kamakura Kouko Mae, Hase and Kamakura) are also illuminated from 4:30pm to 10pm.

Katase Enoshima station, which is already impressive since it looks like a temple, is decorated with red lights during the festivities. 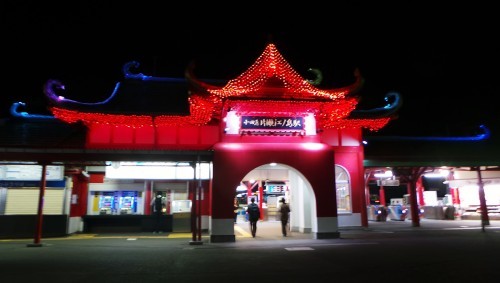 In mid-December, 20,000 winter tulips bloom in the Samuel Cocking garden!