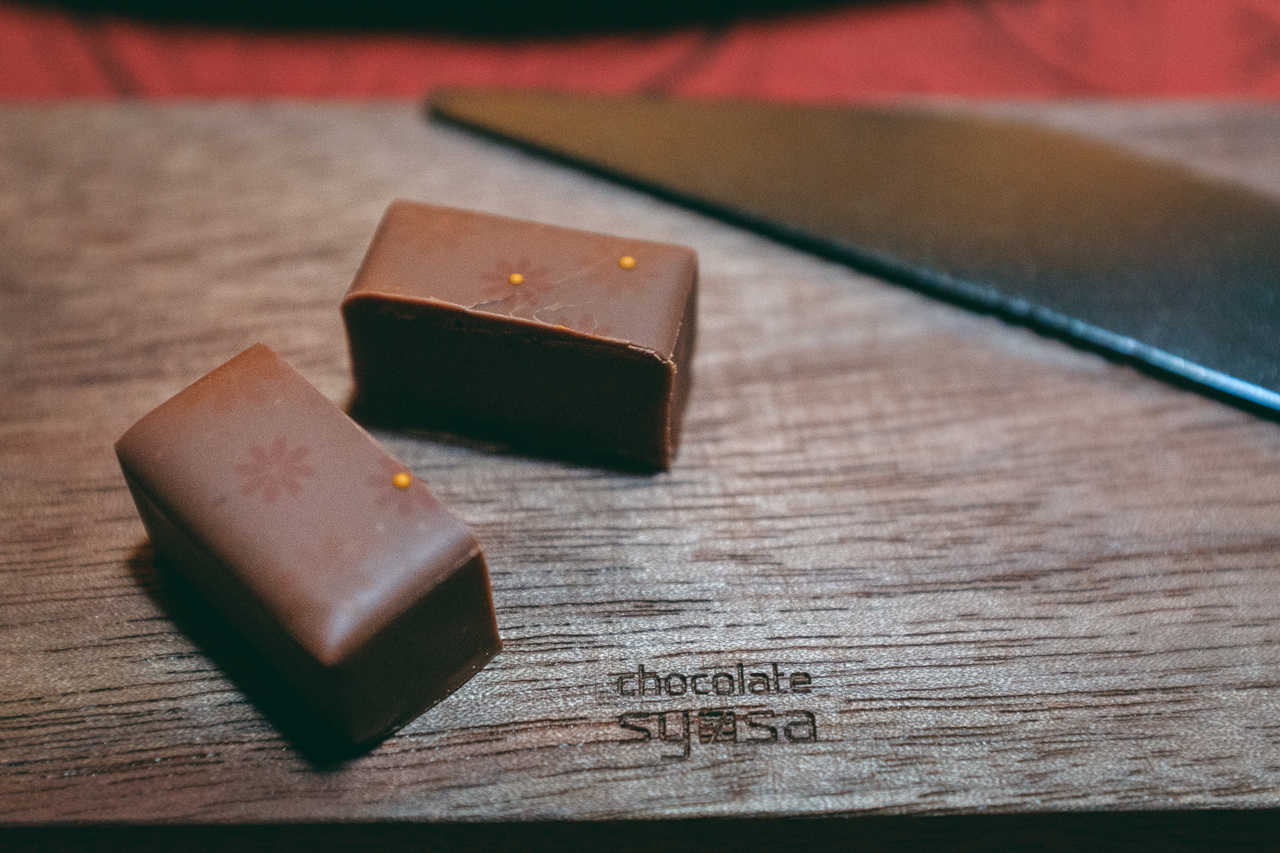 In the small town of Sanda, which lies north of Kobe, as the city stretches into the mountains of Hyogo Prefecture, there is a complex of small, cozy and comforting boutique shops. An enchanting perfume of melted chocolate and baking cakes emanates from the ovens of this collection of confectionery stores. A colorful and fascinating place, this destination attracts children and adults alike. This complex, which takes on the appearance of Charlie and the Chocolate Factory, comes from the mind of Es Koyama, an internationally-renowned chocolatier. 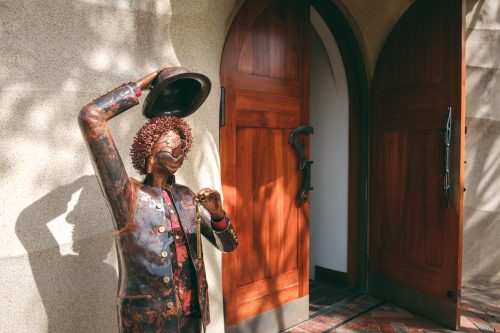 When you arrive at Es Koyama, you enter a universe built with attention to the smallest details. From architecture and statues, to decorations and uniforms, the Es Koyama campus is staged to bring visitors into a fully-realized world devoted to the art of making chocolate. 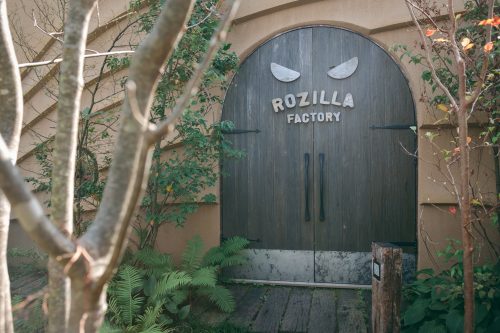 The complex includes eight different shops: some refined and narrow, others spacious and luxurious, all of them share a  touch of fantasy. 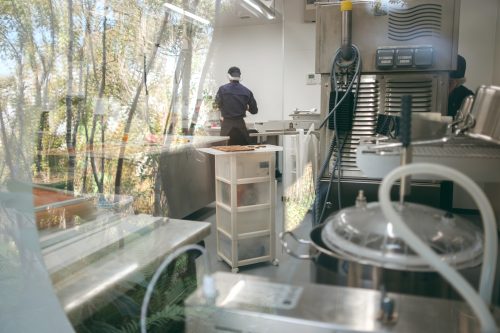 The campus is full of nooks to explore, from staircases and trees to climb, to large windows overlooking the kitchen. Es Koyama is a sweet tooth’s dream and a playground for children and adults. Some may even discover a secret shop by going through a small tunnel that is too narrow for most adults. 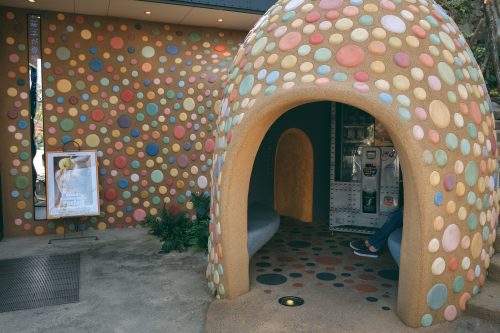 Before becoming a chocolatier, Susumu Koyama was a pastry chef. His chocolate built an international reputation, and his pastries are appreciated by connoisseurs internationally. His famous “Koyama roll,” which won him a pastry contest in Japan is highly-regarded and sought after. Customers line up to buy the cake every day before the shop even opens, so each batch sells out almost immediately throughout the day. 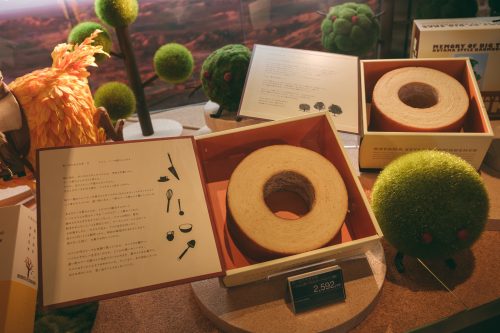 The complex is infused with French aesthetics and cuisine. Koyama travels to France regularly and he has been able to forge his international reputation as a result. It is always fascinating to see how Japanese culture can adopt foreign culinary traditions and manifest them in their own uniquely Japanese way. 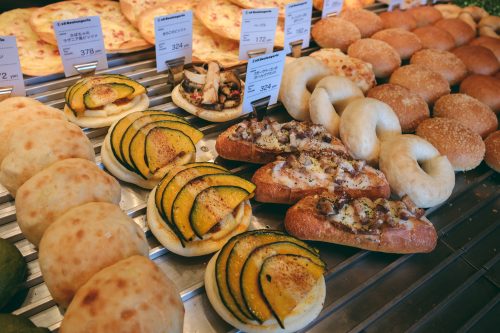 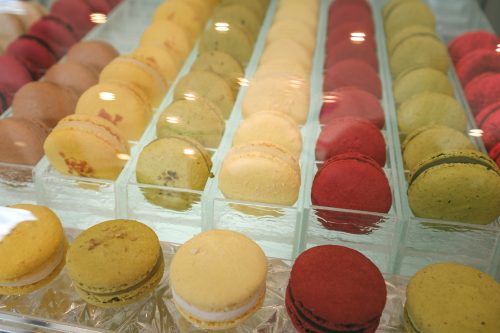 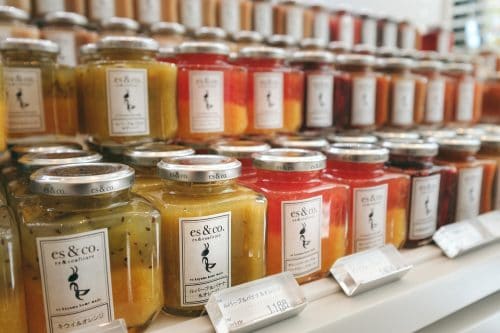 All of the products sold in this complex are of high quality, often using regional products. Almost all products as Es Koyama can be taste-tested before purchase.

Es Koyama’s luxury is even more after entering the “fantasy director,” which is Koyama’s cake shop, opened a year ago. Beautiful cakes are on display in the center of the room in a large well-lit display case, in the middle of a room that seems to be drawn straight from the imagination of a child. 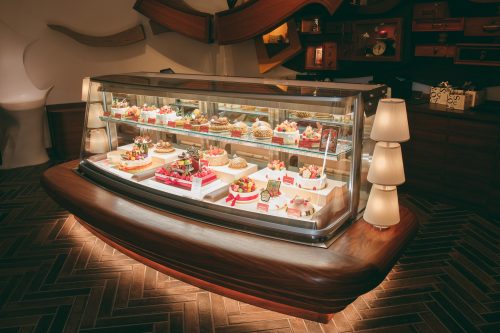 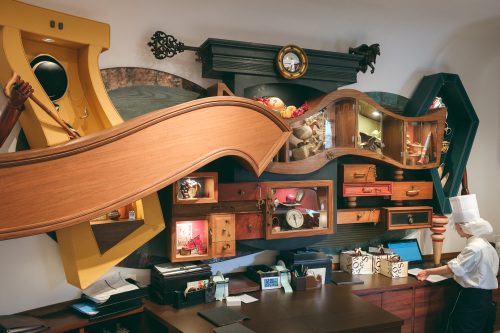 The cakes are beautiful and elaborately constructed, from more serious fare to whimsical designs for children. There is an option to customize cakes and select your desired decorations. 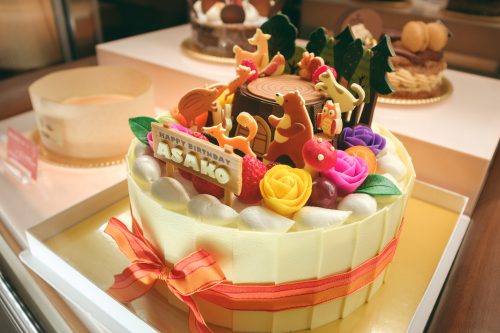 These cakes will make you forget that Es Koyama’s main business is chocolate. Rozilla is his shop dedicated to the chocolate business. 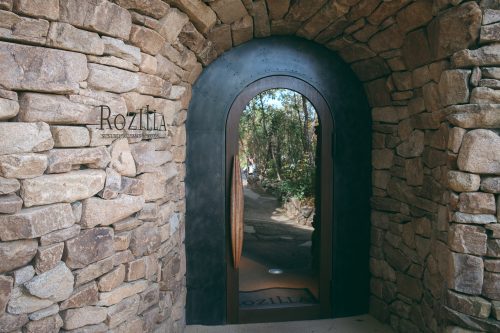 Es Koyama remains a child at heart, as is displayed in his playful interior design. Rozilla evokes an entirely different atmosphere from the other shops. A motif of mechanical gears fills the room, windows on the ground expand your perspectives and all kinds of small surprises are hidden in the room’s details. 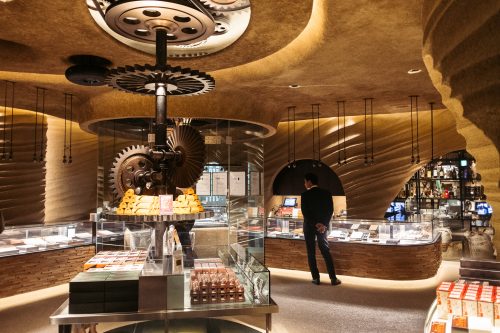 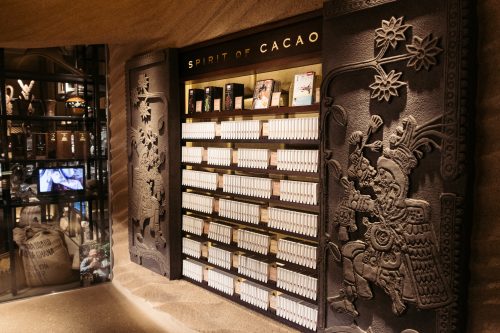 Chocolate is a serious endeavor for Es Koyama. Rozilla has a small tasting room, and guided by one of the staffers, I had the honor of trying his new chocolate collection which he will soon debut in France. Four chocolates were presented to me in soft lighting, highlighted against a granite plate. Koyama explained that every year he goes to France for the show organized by the C.C.C. (Club des Croqueurs de Chocolat) which awards prizes for original chocolate creations. The first time he felt he had an ambassadorial role, with the determination to show the rest of the world that Japanese products matched of chocolatiers’ products in quality and were safe, following the nuclear disaster of 2011. But little by little his presentation at the C.C.C. event have become more playful, and today he goes to the show as a fashion designer would go to fashion week. 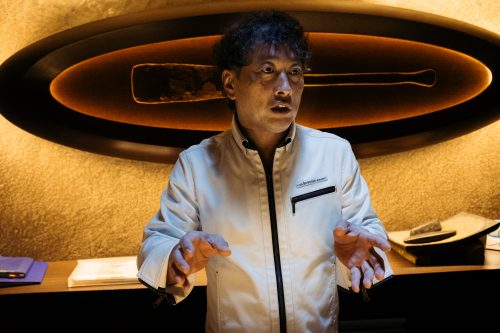 Indeed, the tasting of his 2018 collection could be compared to a fashion show. The tasting order of four chocolates is precise and has been carefully thought through. The music is also part of the show, each chocolate is entitled to its own piece of music. Susumu Koyama realizes his creatives dreams in this four piece showcase. He always wanted to be an artist, and today he creates not only bold flavors with his chocolate but a whole universe that stand alongside it. 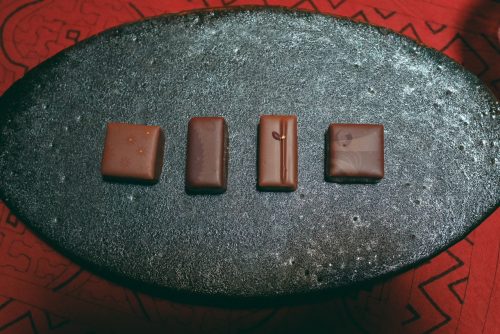 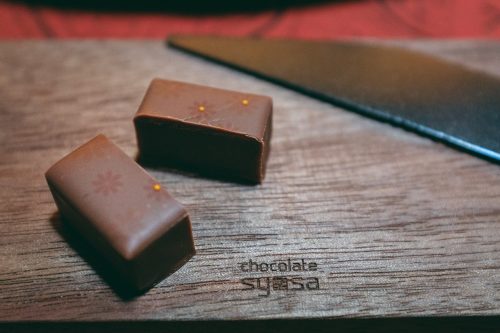 His chocolates have been awarded many times, winning the highest distinction for a foreign chocolate three times. And even though this new collection has not yet been presented to the jury, there is little doubt that it will be a great success. Playing with rare flavors, in search of new pairings that could give birth to new tastes, Susumu Koyama manages to take a trip across the world with these four chocolates. 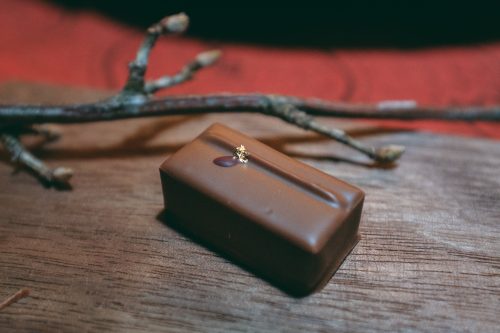 The first features chrysanthemum flowers grown in the mountains of Taiwan, red shiso leaves of Japan for the second, buds of cassis burgundy for the third, and finally Mexican chili. He always creates unexpected but perfectly balanced flavors that showcase the ingredients with every bite. 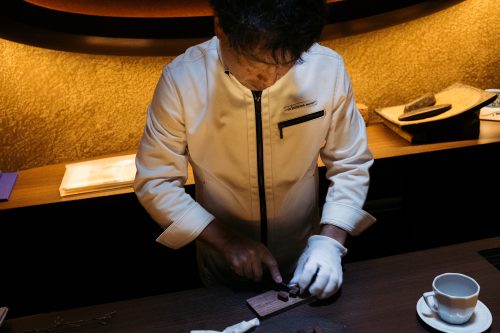 A true researcher, Es Koyama travels the world in search of new ingredients with which to create his newest chocolate concoction. When I asked what sets his creations apart from other chocolatiers, especially French chocolatiers, Es Koyama replies that he has freedom. He can give free rein to his endless curiosity, his curiosity as a child, which drives him to always want to discover more things, to test the limits, to experiment. As an adult, Koyama has managed to tap into his childhood instincts in order to produce tasty creations full of fantasy. 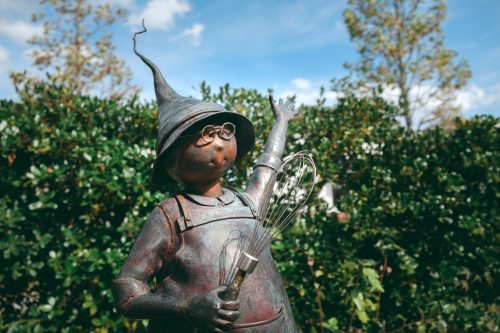 Fall Colors in Kyoto: The Best Autumn Foliage Spots to Visit in 2021